This website requires certain cookies to work and uses other cookies to help you have the best experience. By visiting this website, certain cookies have already been set, which you may delete and block. By closing this message or continuing to use our site, you agree to the use of cookies. Visit our updated privacy and cookie policy to learn more.
Home » For Homeowners, Energy Efficiency Is All About Saving the Greenbacks
NewsHVAC Residential MarketGreen Building

For Homeowners, Energy Efficiency Is All About Saving the Greenbacks

It’s no secret to anyone in the HVAC industry: Homeowners want to save money. And with heating and cooling accounting for nearly half the energy use in a typical U.S. home, it’s not a surprise that the market for energy-efficient products continues to remain strong. According to a recent study by Zillow, energy efficiency ranked among the top priorities during a home search.

So when it comes to “going green,” is it more about saving the environment or saving money?

RESNET is a nonprofit organization responsible for the Home Energy Rating System (HERS) Index Score, which measures a home’s energy efficiency.

“It’s about living a greener life and also about cost savings,” she said. “We’re at over 2 million HERS-rated homes. The first million took 15 years to achieve; the second took five. Obviously, the market is responding. It’s not a trend: It’s here to stay, and it’s growing.”

For many homeowners, going green is all about the tradeoff.

“The biggest thing [with an energy-efficient home] is going to be about utility savings: the idea that, with a low score on our index, the HVAC system runs to its efficiency, and that homeowner is going to spend less overall,” Briggs said.

That goes for maintenance of high-efficiency equipment, too. Not only is it about getting the most value from their purchase, but it can pay off long term.

“They could be pursuing an energy-efficient mortgage on their home,” she said. “If they decide to move, that increases resale value ... so maintaining it as much as possible helps them sell it for a premium.”

That holds true for Scott Kochuyt, an estimator at Crawford Heating and Cooling Inc., located in the Quad Cities area.

“The biggest thing I hear from customers is, ‘Since I put this system in, my utility bill has been cut in half.’ It’s like a dimmer switch: The light’s still on, but it’s using less energy.”
— Robert Buonomo, sales manager Beck Cohen, Charlottesville, Virginia

“I really haven’t seen an overwhelming demand from people for green technologies,” he said. “We are finding that most customers locally are more interested in utility rebates and lower overall operating costs rather than truly pursuing green technologies when selecting higher-efficiency equipment.”

Having said that, when customers ask for greener technologies, Kochuyt finds that heat pumps and ductless mini splits offer the best value. Many of today’s dual-fuel heat pumps can achieve ratings of 20+ SEER, and recent improvements in ductless mini-split technology have allowed some of these units to achieve as high as 42 SEER, he said.

“This is double and sometimes triple the electrical efficiency ratings of conventional air conditioning systems,” Kochuyt said. “Many of these units are heat pumps also and can heat and cool spaces very effectively and efficiently at lower utility costs. They do carry a higher upfront installed cost but offer a lower overall ongoing cost of operation due to their efficiency, so it is a great option for people who are looking to reduce their energy consumption.”

As with any expensive HVAC purchase, Kochuyt recommends — at a minimum — annual check-ups once the system is installed. This ensures that the system is operating at its intended efficiency and effectiveness, he said.

“It can also mitigate or identify any potentially expensive repairs prior to their occurrence,” Kochuyt added. “This can help protect and extend the life of a very significant investment.”

In the first category, Lennox’s PureAir system ranks high on his list. In terms of energy savings, the biggest request the company gets is for systems that are variable speed, be it a furnace or a heat pump with an air handler.

“Most are 100 percent on, 100 percent off, no in-between,” Buonomo said. “Even a two-stage system comes on at like 60 percent and then quickly goes to 100 percent when the second stage kicks in. Variable speed starts at 35 percent and is able to go up at 1 percent increments, so you actually have 65 different stages of heating and cooling.”

A Wi-Fi communicating system knows the outdoor humidity and temperature, so it kicks it on at whatever percentage is needed to maintain the owner’s preferences.

“Because the new systems are designed to run longer at a lower electrical rate, they cost very, very little money to run,” Buonomo said. “The biggest thing I hear from customers is, ‘Since I put this system in, my utility bill has been cut in half.’ It’s like a dimmer switch: The light’s still on, but it’s using less energy.

In some places, being environmentally conscious does pull rank over saving money. That’s the case in Phelps, New York, where Hal Smith is CEO at Halco Energy.

“One of the areas we service is Tompkins County: the Cornell University, Ithaca College area,” Smith said. “They are very much anti-fossil fuels.”

Many of the houses he works with are from the late 1700s and 1800s and have stone foundations, so the residential work is almost all retrofit.

FIXER-UPPER: Halco Energy retrofits houses from the 1700s and 1800s to make them net zero. “We take a very old home, do an energy assessment, and add a heat pump and enough solar so they never have an energy bill again,” said Hal Smith, CEO.

“We do a lot of renewable energy: solar, geothermal, air source heat pumps, energy assessments … we’re the whole-house approach type of company,” he said. “We retrofit a lot of homes, so they become net zero: We take a very old home, do an energy assessment, add a heat pump and enough solar so they never have an energy bill again.”

“They are a very good fit; sometimes in these old homes, you don’t have room to run large ductwork because structurally, they’re much different,” said Smith.

When Halco installs a new system, the customer gets a 10-year parts and labor warranty — contingent on a maintenance agreement, because green is more than just a product, he said.

“We deal with the entire package,” Smith added. “You can buy a product that’s Energy Star rated, but that doesn’t mean the installation is Energy Star rated. Ongoing maintenance is also required. I will give you a no-exception, bumper-to-bumper warranty, but you’ll have to let me come back every year and service it. That’s what separates us from what we call the ‘Chuck in the truck-’ and ‘Dan in the van’-type companies.”

At Air Control Home Services in western Arizona, energy efficiency is part of the company culture, and it carries through in the employees’ work.

“We find many times that the customers don’t necessarily know what they are looking for; they just know that they want the home to be more efficient and comfortable,” said Jim Jensen, president, Air Control.

So he has equipped his staff to make those educated decisions. All the field technicians, and a large portion of the office staff, have been through Building Performance Institute’s (BPI’s) Building Analyst class. When it comes to making a home greener, Jensen said there’s no single right answer. Sometimes it’s AeroSeal duct sealing, and sometimes it’s adding an additional return. They’ve replaced single-stage pool pumps with variable speed, done air sealing in combination with AeroSeal, and even installed LED lightbulbs in the home.

“We understand that the home acts as a whole and that changing any one item can affect other parts of the home,” he said. “It really is specific to that particular home and the characteristics that it has.” 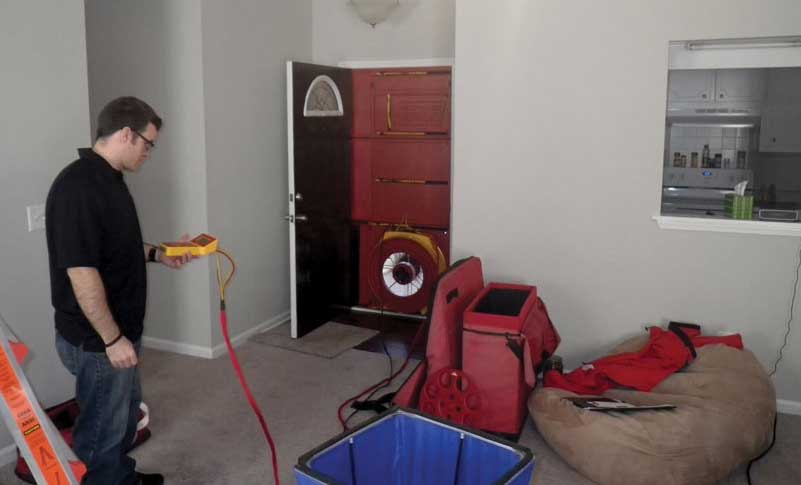 EVERYTHING IS GREEN: For BPI Gold Star certified-contractor J.R. Bolton Services, being green means looking at the whole house, not just the HVAC unit. As part of an estimate, technicians conduct a blower door test to see how tight or leaky the house is.

In humid Atlanta, J.R. Bolton Services gets a lot of requests for high-efficiency equipment from customers trying to lower their energy costs. On average, 75 to 80 percent of its sales are products with 18 SEER and higher. J.R. is one of two BPI Gold Star Certified contractors in the metro Atlanta area. When a customer calls about a replacement HVAC system, the company spends about three hours performing the estimate. There’s a blower door test to determine how tight or leaky the house is, then a pressure test on the duct system, and finally a Manual J calculation on the house to properly calculate the load.

“All that is part of being green, and 99 percent of our competitors don’t do any of this,” said Jeff Bolton, president, J.R. “They go in, look at the equipment, say ‘you have a 3 ton, let’s put a 3 ton back in,’ and don’t do a load calculation because they assume it was sized right the first time.”

For him, working toward energy savings goes far beyond sizing the a/c unit. For example, Bolton installs a lot of dehumidifiers (mostly Thermistor models) to keep the humidity lower, so the thermostat can run a bit higher while still keeping the customer comfortable.

“A lot of our competitors are pushing a whiz-bang product that is supposed to solve all their problems, but making something green really goes much beyond equipment,” Bolton said. “You have to look at the whole picture: the thermal boundary of the home, the air barrier. That, to me, is green. It’s not putting in a $3,000 filter or something like that. It’s building science; it’s the whole-house approach.”