“We've been working on integrating into their culture,” he said. “We were already on a similar path; our mission was creating a better tomorrow every day. So it fits very well. And they’re fanatical about getting closer to the customer. That's one of the reasons why we're here.”

“As people are looking at their air handling systems, upgrading them, making them more bulletproof, it's an opportunity to improve their fans and coils,” he said. 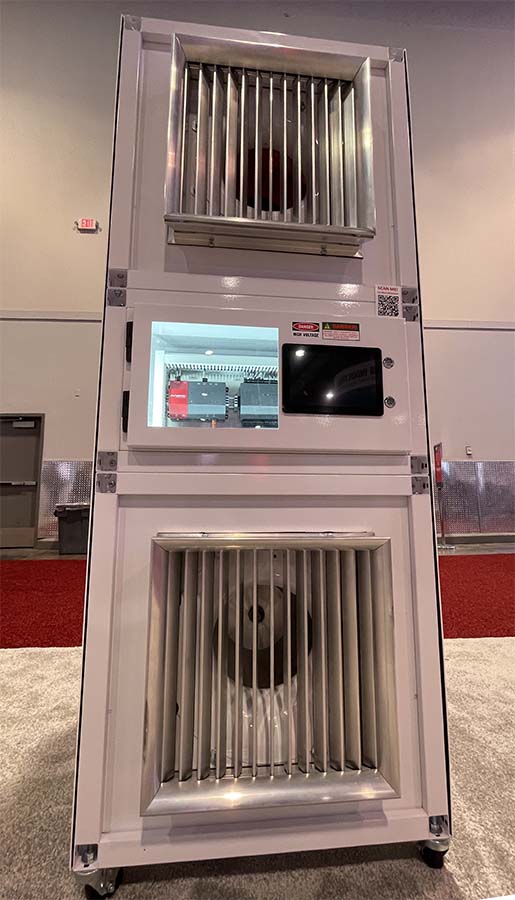 FAN CUBE: Nortek’s fanwall technology was shown in a set of two at the Expo but can be used in sets as large as 16 or 32, customized for the user’s needs. (Staff photo)

Featured at the booth was Nortek Air Solutions’ Fanwall Technology, launched in 2006 and released this year in its third-generation version.

Anderson pointed up at the high ceiling of the Las Vegas Convention Center.

“In this hall, up in the ceiling, are a number of air handlers that are rather impossible to easily service,” he said. “But our small fans make it easier. With Fanwall Technology, we break down these large single-fan systems into multiple smaller fan arrays so service people can change them out easily. And because we replaced one big fan with multiple smaller ones, if one fan was to stop, you still have maybe five others running. It's a redundancy reliability benefit, because getting a mechanic up there in the middle of a convention would be rather impossible.”

The newly released Fanwall fan cell - Generation III reduces vibration to near zero, ties into building automation systems with their System Optimization controls to better manage fan on/off cycles, and has a patented backdraft damper that opens and closes by itself and has “basically zero pressure drop,” Anderson said.

Coupled with Fanwall was Nortek’s heating and cooling coils, which the company builds in Oklahoma City to supply their own coil needs and sell to other OEMs and brokers.

“We're able to build a replacement coil to the exact size and capacity in just a few days, or several weeks, depending on their urgency,” Anderson said. He said Nortek Air Solutions packages fans and coils so contractors can have a retrofit solution that can typically be done over the weekend.

“I've been on job sites where we replaced a single fan with four fans and new coils in a day and a half over the weekend,” he said. “So the hospital was closed Friday night, and by Sunday evening, it was up and running again.”

On the residential side, Nortek displayed its Frigidaire FG8SD Ultra-Low NOx Furnace for the first time at the AHR Expo, due to last year’s cancellation. The FG8SD reduces NOx emissions to less than 14 nanograms/joule which, when combined with a high-efficiency 95% AFUE, makes it one of the most eco-friendly gas-fired furnaces on the market, according to a press release. The unit provides an option for residents in California’s South Coast Air Quality Management District (SCAQMD) and San Joaquin Valley Air Pollution Control District (SJVAPCD) where green options for heating and cooling are required.

“It’s not the same as electrification,” he pointed out. “People will sometimes use the terms decarbonization and electrification to mean the same thing, which they are not. Not everything can be electric in the long run due to a multitude of factors such as an aging electrical grid in the United States — there still have to be gas-fired appliances, and this is our initial offering for those areas of the country where these types of furnaces are required. We fully anticipate decarbonization to spread throughout the throughout the country as time goes on, balancing the needs of electric and efficient gas appliances.”

The residential display also included Nortek’s heat pump mini splits, “which we've had at the show before, but these continue to take off in the industry and we continue to have great success with these products in the marketplace,” Leonard said.

Mounted on the wall, a sleek black-and-white unit — the UBZ 75 — showed off another Nortek Global HVAC product upgrade: a redesign of the entire Reznor line of gas-fired unit heaters. Aesthetically, it was changed to a powder-coated white finish with a black front face and a red louver, a hinged door that doesn’t need to be removed for maintenance, and “REZNOR” embossed on the bottom. 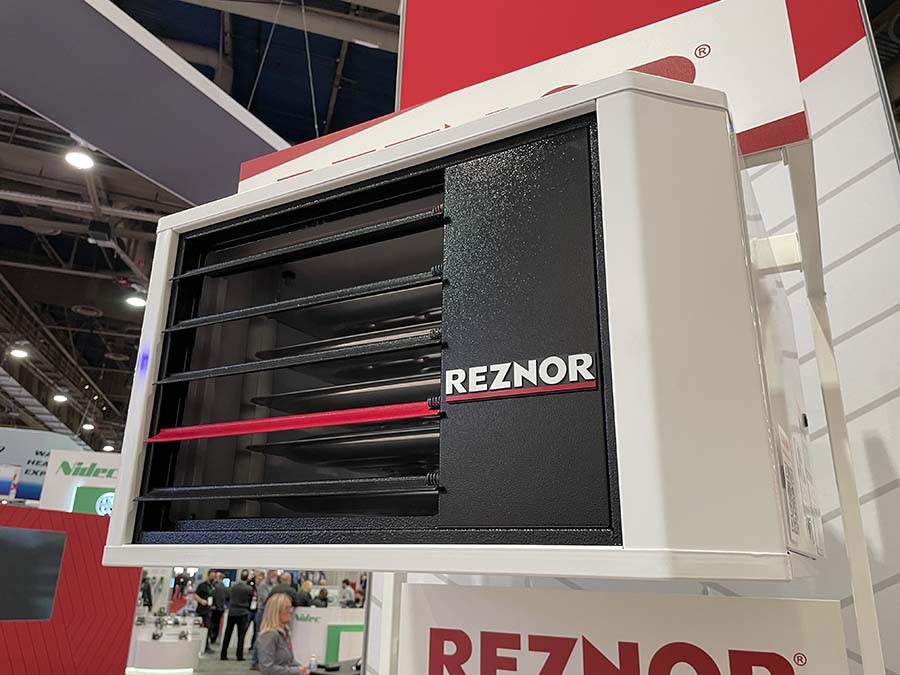 QUICK CHECK: The UBX 75, part of the Reznor line of gas-fired unit heaters, has an LED light to indicate whether the unit is operating or in need of service. (Staff photo)

“And at the end of that emboss is an LED, which is pretty neat … because a building manager or a homeowner can walk under the unit and know instantly if their unit has an issue or if it’s running,” explained Brandon Bossung, product manager, Nortek Global HVAC. “If that LED is off or flashing, they can go inside [the unit], where we added a seven-segment display board with a digital readout that will tell you exactly what the fault code is.

“For contractors on a service call, this makes it really easy for them to get in there and find out what they're doing very quickly,” he said. “A lot of the changes that we did with this unit heater were for the contractor, and we wanted to make sure that it was easier and safer for them to work on.”

Over the past year, Nortek also developed an interactive digital tool called Nortek 360.

“Nortek is not necessarily a household word, but some of our brands are,” Anderson said. For example, Frigidaire and Maytag are well known, but other Nortek brands like Temtrol or Huntair are only known in the commercial/industrial realm.

The application shows a picture of a city, with an airport, a high-rise, a university.

“We have 30 buildings and 60 of our products,” Anderson said. “You can drill into building like a university, see all the different products we could provide. If you want to talk to the customer about a custom air handler in depth, it identifies where it is and then gives a little detail about the product … gives you a cutaway, shows how it operates.”