Coming attractions like SEER2/EER2, more realistic testing methods, and updated Energy Star labels are only a year out

The calendar may just be flipping to 2022, but in the world of efficiency standards, it is not too early to start looking further ahead. Minimum efficiency standards for new residential central air conditioning and air-source heat pumps will bump up as of 2023.

These standards last increased in 2015. At that time, the U.S. Department of Energy (DOE) broke out a separate standard for the Southeast and Southwest regions and increased requirements for only those areas. Efficiency standards have not increased for the rest of the U.S. since 2006.

Put most briefly, residential systems in the northern part of the U.S. will have to meet a 14 SEER rating, and the southern part will have a 15 SEER requirement.

Air-source heat pump systems use a heating seasonal performance factor (HSPF) metric. The U.S. Energy Information Administration (USEIA) relayed that minimum heating efficiency for these heat pumps will rise from the 8.2 HSPF of 2015 to a new minimum 8.8 HSPF.

When the DOE calculated the effects of the 2023 standards back in 2017, it projected that households using central air or heat pumps will “collectively save $2.5 billion to $12.2 billion on energy during the 30-year period” following implementation, according to the USEIA.

However, a survey from Emerson (PDF) suggests that many contractors and distributors have some catching up to do in 2022 to get ready for the change.

Ninety-three percent of respondents lack extensive understanding of the associated business requirements, according to Emerson’s research. Another 70% had taken no action yet in response to the regulations. Thirty percent had done some related training for service staff or technicians, while nearly 20% had developed a new marketing plan in response to upcoming higher efficiencies.

Half of these contractors and distributors expressed concern about creating a new inventory plan. Thirty-nine percent expect to be affected by increased costs as a result of the new requirements, and 32% believe they will be “impacted by changes in equipment.”

“Even if your a/c is only 10 years old, you may save 20% to 40% of your cooling energy costs by replacing with a newer, more efficient model,” with savings that could reach $10,000 over 10 years.”
Laura Petrillo-Groh
Senior regulatory advisor, AHRI

The new efficiency requirements involve much more than those top-line SEER increases. Laura Petrillo-Groh participated in an Air-Conditioning, Heating, and Refrigeration Institute (AHRI) webinar that took a deeper dive into the new standards and possible effects for contractors. 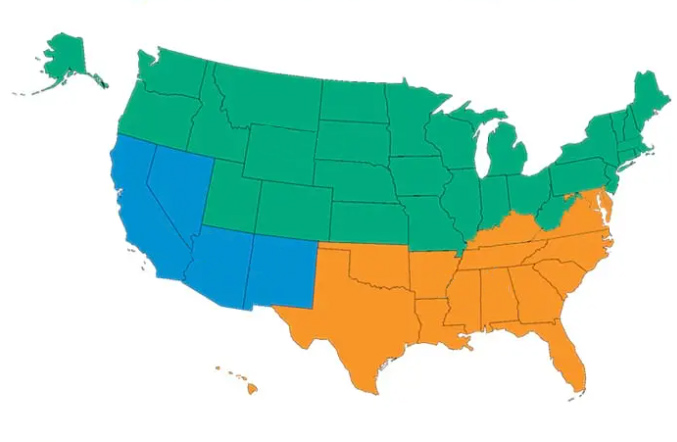 Petrillo-Groh is senior regulatory advisor for AHRI, developing and advocating consensus positions among AHRI members regarding codes, standards, and regulations for energy efficiency and green construction.

Overall, minimum efficiency is increasing by approximately 7% as a result of this transition, she said. For historical context, Petrillo-Groh described the most efficient residential air conditioning systems today as using 30% to 50% less energy than those from the mid-1970s.

Petrillo-Groh expects that the variety of consumer choices — single-stage, two-stage — and plenty of rebate and incentive programs will only encourage upgrades.

She estimated the new requirements could save as much power as that used by 27 million households, translating to about $38 billion in utility bill savings.

Contractors and distributors can expect to see terms like EER2, SEER2, and HSPF2 enter the picture (and the labeling) in coming months.

Currently, the Energy Guide label shows a SEER, and that number is intentionally conservative, assuming the least efficient pairing of other yet to be determined system elements with the coil. So actual SEER can change or improve depending on those other components.

Meanwhile, she said, the AHRI directory certificate provides a specific efficiency. This approach allows professionals or consumers to see how a system’s efficiency changes when certain components might change.

Because the EER2, SEER2, and HSPF2 ratings will reflect the new testing procedure, that will prevent a neat apples-to-apples comparison to the previous efficiency ratings.

For example, she explained, a packaged product would have a different conversion factor from SEER to SEER2 than a split system would.

In addition, a casual examination of an HSPF2 rating versus a previous HSPF rating might suggest that the standard has been relaxed, Petrillo-Groh continued. That is not actually the case; it just reflects that HSPF2 is a result of the new testing.

These distinctions are important since, as Petrillo-Groh said, the yellow FTC tag will show SEER2 ratings instead of SEER as of 2023.

She encouraged attendees to consult a resource such as an AHRI directory that will let people determine products that are appropriate in their region.

One such resource is seer2.com, a SEER2 guide that Johnstone Supply has created to teach HVAC professionals about the new ratings and changes while offering an interactive map with region-specific requirements.

Fortunately, the old SEER and EER ratings will go away, Petrillo-Groh said in the webinar’s Q&A. But for now, contractors and distributors face a transition requiring extra attention.