Hydronic radiant heating systems have been around for centuries — dating back to the Roman times. The unique design of circulating warm water through piping to heat a surface has proven to be a highly efficient and effective method for delivering indoor comfort.

Over the past several decades, that indoor concept has migrated to outdoor spaces, providing automatic snow and ice melting for driveways, walkways, parking lots, and various other outdoor spaces.

However, some commercial projects have taken snow and ice melting to a new level with unique, out-of-the-box applications. Read below to find out about a few of these exceptional concepts to learn innovative ways for providing the safety and convenience of automatic snow and ice melting.

Why snow catch basins? Well, back in December 2010, the roof collapsed on the old Metrodome stadium after nearly a foot and a half of snow accumulated, sagging the Teflon and fiberglass fabric dome roof.

Thankfully, no one was hurt. But it got the engineers to thinking when it came time to design the new 1.75 million-square-foot stadium, which opened to the public in July 2016. About 60% of the stadium’s new roof is made of Ethylene Tetra Flouro Ethylene (ETFE), a durable, lightweight, plastic-like roofing material that’s been used for three decades in construction. The remainder of the roof features a traditional steel deck and membrane style.

Designing the roof with a 1:12 pitch and adding a special glaze that deflects sunlight and aids in melting allows the snow to slide off and into catch basins around the stadium’s upper perimeter. The basins, which range in width from 5 to 40 feet, cover a total area of about 58,000 square feet.

The floors of the basins include an embedded hydronic radiant snow and ice melting system that automatically melts snow on contact, enabling the melted snow (i.e., water) to run down a drainage system.

The project used 70,000 feet of ¾-inch PEX radiant tubing that was prefabricated into custom-designed mats that arrived on the jobsite in large rolls. The installers simply unrolled the pre-pressurized mats and connected the headers to the supply and return manifolds.

“This project was unique because the system was elevated off the ground,” said Joe Grubesic, sales director for the Midwest at Uponor, the manufacturer of the hydronic radiant snow and ice melt system. “Typically, these systems are on the ground either embedded in a concrete slab or under the earth as a turf-conditioning system to keep snow and ice off grass and to keep the root structure warm. But this system was 100 to 125 feet above the ground. Totally new and innovative.”

The Northstar commuter rail, which runs along one of the most congested and fastest-growing corridors in Minnesota, from Big Lake (located about 40 miles northwest of the Twin Cities) to downtown Minneapolis, features various stations at each stop.

The main station in Ramsey, Minnesota, consists of two passenger platforms that are 425 feet long and 26 feet wide. To ensure the safety of commuters from slips and falls, the city decided to embed a snow and ice melting system into the concrete platforms.

“We installed a total of 48,000 feet of ¾-inch PEX tubing laid 6 inches on center,” said Greg Koba with Klamm Mechanical, the installing contractor. “The design included six manifold boxes and 20 radiant manifolds placed every 85 feet, which were embedded in the sidewalk butting up to the platforms.”

The design also included eight, 2-inch PEX main lines for each platform that run from two manholes in the landscape area, then enter the slabs and stub into the manifold boxes. The two manholes connect through a 16-inch jacket housed underneath the track that also holds the two 4-inch main lines that supply the platform.

Interestingly, the design originally called for HDPE piping, but Klamm Mechanical realized HDPE would not be able to provide the BTUs required for the system.

“HDPE pipe is not designed to handle the type of system this project required,” Koba said. “We were able to change specifications with the engineering firm to PEX tubing.”

Koba also noted one of their biggest concerns was ensuring the supply and return piping to the manifolds did not compromise the structural needs of the system. ”By using large-dimension tubing to feed all the manifolds, we were able to route the system efficiently and correctly,” he said.

With an average annual snowfall of 15 feet, Steamboat Springs, Colorado, is very familiar with the white, fluffy stuff. But that amount of snowfall can really put a damper on outside play for active schoolchildren. 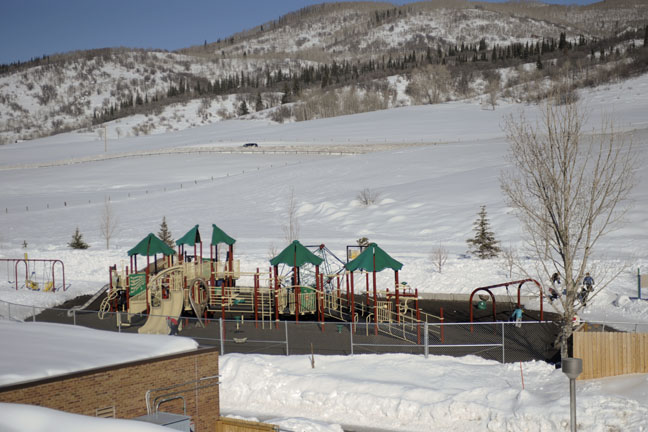 PLAYTIME ALL THE TIME: This elementary school in Steamboat Springs, Colorado, includes a snow and ice melting system embedded in the concrete and covered by a soft material for the playground area of the school. (Photo courtesy of UPONOR)

The school district was looking for a solution that offered safety for the kids but also provided low maintenance. They chose to have a hydronic radiant snow and ice melting system installed in the playgrounds of Strawberry Park Elementary and Soda Creek Elementary, offering the kids a safe, dry surface to play on during recess.

The system not only gave the children an opportunity for play all year round, but it also offered the school district added peace of mind, as it limited liability concerns associated with slips and falls on the snow and ice.

According to Pascal Ginesta, director of maintenance, operations, and transportation for the Steamboat Springs School District, the systems are basically designed the same as a commercial sidewalk or residential driveway snow and ice melting system, but with a slight variation.

“The difference is we’ve applied a layer of soft material on the concrete substrate,” said Ginesta. “The system has its own natural-gas boiler with hydronic lines that circulate through the concrete to warm it and melt the snow and ice.”

The system is activated from a sensor that detects falling snow and cues the boiler. When the snow stops, the sensor sends a signal to turn the boiler off. This energy-efficient design means the system functions only during a snowfall, which never has a chance to accumulate.

However, according to Ginesta, they learned an important lesson with the first winter after the system was installed. During the winter break, a school official at Strawberry Park Elementary turned the system off, which disabled the automatic snow and ice melting. It snowed quite a bit during that time and, with the system off, the snow accumulated and had to be shoveled away.

“That was a lesson learned,” Ginesta said. “Now the system is turned on all winter long, yet only activates during a snowfall.”

Heat Sources Can Be Unique, Too

In addition to new and innovative installation applications, there are also smart ways to provide sustainable heat sources to make snow and ice melting systems more efficient and effective.

To provide an example of how these systems can work, the city of Holland, Michigan, installed a sustainable snow and ice melting system in the streets and walkways of their downtown area and used waste heat as the heat source, essentially providing free energy to the system.

For the design, PEX tubing serves as the cooling mechanism for the turbines in the city’s power plant. River water pumps to water-to-water heat exchangers, where heat from the turbines transfers to the loops, raising water temperature to 80°F to 90°F for the snow and ice melting system. Two pumps circulate the water through the system, and the water then returns to a nearby river at an acceptably cool temperature.

After reviewing just a few of these commercial projects, it’s easy to see how thinking beyond the surface of simple snow and ice melting systems can bring greater innovation and efficiencies to commercial projects. With unique designs and out-of-the-box concepts, people can work smarter, faster, and easier to provide results that promote sustainability and can even benefit a project’s ultimate bottom line.

Kim Bliss is the technical and marketing content manager at Uponor. She can be reached at kim.bliss@uponor.com.