The legal cannabis market continues to represent the dot-com era. Plenty of opportunity remains. The state of Connecticut recently joined 17 other states in legalizing the sale of recreational marijuana. So there seems like plenty of potential for growth. But at the same time, California’s legislature approved $100 million to bail out the state’s dispensaries.

So some cannabis growers might be the next Amazon, but many will be the next Pets.com. The difference will likely come down to basic business practices like controlling costs. Electricity is one of the biggest costs for a marijuana grow facility. In fact, one study showed Colorado’s cannabis growers used more energy than its mining operations.

“Energy costs and labor costs are consistently the two most impactful drivers from a cost perspective that all cultivators growing indoors must manage,” said Chip Seidel, chief of operations for Anden. 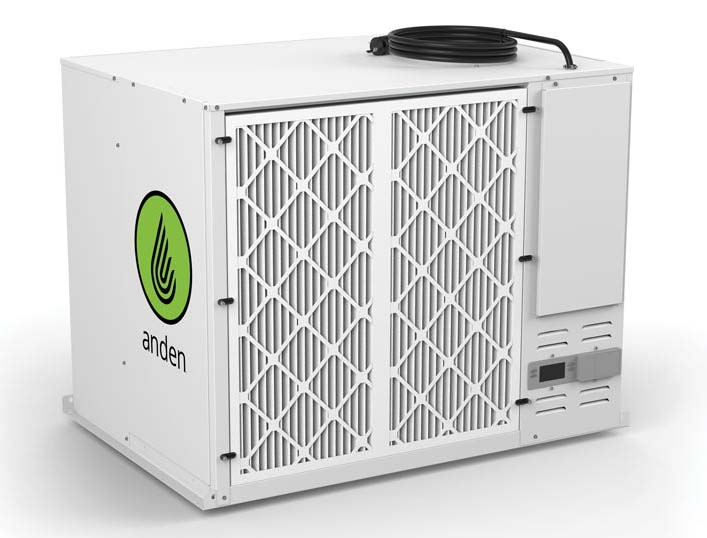 PLUG AND PLAY: Anden helps grow operations ready to start thinking about controlling costs such as their electricity bills. (Courtesy of Anden)

Growers often face cash flow issues when they start out. Many banks still refuse to lend them money due to federal laws, so they need to generate money quickly to finance their day-to-day operations. This means using the least expensive equipment available, including cheap humidifiers and sodium lights.

“Raising capital because of the lack of federal approval means many grow operations must purchase lower-cost HVAC systems that have no chance of being energy efficient,” said Keith Coursin, president of Desert Aire.

“The trend is towards increasingly efficient equipment that is specifically tailored for the demands of indoor cultivation.”
— Chip Seidel
Chief of operations, Anden

Modern cannabis production is in many ways an industrial process. The plant can grow anywhere. Before legalization, growers would plant seeds in out-of-the-way locations or mix them in among other crops. The quick, consistent growth required of legal growers needs the right conditions, Seidel said.

This means pumping grow rooms full of CO2, shining extremely bright lights, and giving the plants plenty of water. The byproduct of this process is moisture. The plants transpire the water back into the air, creating several challenges for growers.

“It is very important to remove this excess moisture so there is room in the ambient air to continue absorbing the moisture the plants are transpiring,” Seidel said. “If the moisture is not removed quickly, the crops will suffer and so will yields and ultimately profits.”

Early on, growers often use crude dehumidifiers to take the moisture out of the air. They work, Seidel said, but they use a lot of energy. Once growers have money to re-invest into their operations, they start looking at ways to get better performance while using less energy. This means switching to LED lights and investing in a commercial dehumidification system.

“The trend is towards increasingly efficient equipment that is specifically tailored for the demands of indoor cultivation,” Seidel said.

Coursin said growers need to understand a couple of key functions of an HVACD system (the “D” is for dehumidification) to know how to best control costs. First, the system must be properly sized to match both the sensible and latent loads of the space. The system must have the ability to stage or modulate the system to match these variable loads during the life cycle of the plant.

Second, growers need to understand the importance of set points, especially the impact of very low dew points. These require much larger HVAC systems in order to meet the latent load. Sometimes, Coursin said, a grow facility needs an HVAC system twice the size of that otherwise needed for the same square footage.

Anden and Desert Aire offer two different options for growers. Anden’s units are dedicated dehumidifiers. Seidel said these combine with a sensible air conditioning system to provide a solution for growers. The advantage of this setup is cost, both upfront and if something goes wrong, because only one aspect of the system will need a repair. But Seidel said there is a trade-off in efficiency.

An integrated HVACD system, such as that built by Desert Aire, gains that efficiency in part by using a control algorithm that has been designed specifically for the grow application. This algorithm manages both critical variables of sensible and latent loads. The integrated system can also use energy recovery techniques (such as full capacity hot gas reheat) or heat exchangers (such as plate exchangers or wheels) to reduce energy requirements.

Whichever system a grow operation opts for, energy is becoming a bigger concern. The good news is there is help to control these costs. Utilities are offering rebates to update the HVAC systems of grow operations. The operators themselves have a better understanding of the requirements of their facilities and the energy needed to meet those requirements. So they can work with engineers, manufacturers, and contractors to find the system to best meet their needs at the lowest energy cost.

“In the near future, we will see operators see the importance of energy conservation,” Coursin said. “Energy consumption is one of the largest costs for an operator. As prices for the product are reduced due to increasing supplies and the demand for product stabilizes then the cost side of the profit equation will become more important for each operator for maximizing profits.”