Decarbonization Plans to Work in Both Residential and Commercial HVAC Sectors

The decarbonization wave is underway, momentous, and messy. What makes it messy? Multiple state governments, many code jurisdictions, and scores of local circumstances. Add conflicting priorities within the decarbonization effort — electrification is the most prominent component, but not the only key.

Finally, any scenario of shifting away from fossil fuels and toward renewables and greener electricity is banking on the will and resources to shore up the electric grid in a significant way.

If that all seems a little abstract or removed from day-to-day contracting business, it’s not, and that is at least as true for commercial work as it is for residential.

Jessica Leung of the Center for Climate and Energy Solutions wrote a 2018 paper (“Decarbonizing U.S. Buildings”) that summed up neatly why commercial buildings will be squarely in the sights of decarbonization efforts. 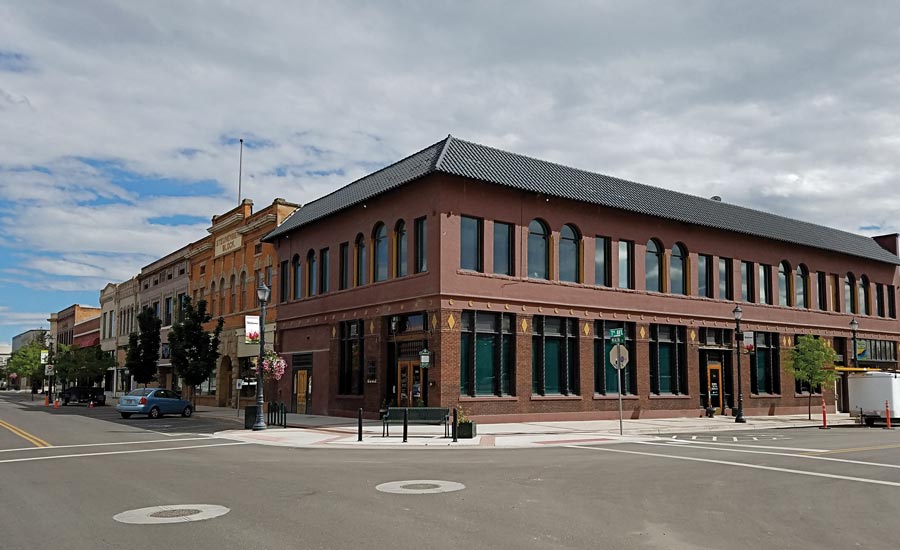 ON THE CORNER: Owners finding themselves at the intersection of greener energy and ROI will be watching not only regulations but also incentives for electrification retrofits. (Courtesy of Tamanoeconomico, CC S-A 4.0)

That is too much space for any moderately ambitious energy initiative to ignore.

David Nemtzow is the director of building energy technology at the Department of Energy’s Office of Energy Efficiency and Renewable Energy.

“There are basically four buckets of ways to decarbonize,” he said at an AHRI webinar on May 4.

The first bucket is energy efficiency: design, equipment, windows, and insulation. Contractors interested in positioning themselves as resources not just in heating and cooling but in energy might take note of the opportunities in that bucket, including weatherization in general.

Next up is “cleaning up the power grid.” Related, Nemtzow noted that 70% of buildings’ related carbon emissions are due to the electronics, not the buildings and systems themselves.

Electrification is its own bucket — cleaner fuels and cleaner power.

And lastly, “how you build the buildings,” which pertains more to building materials. Nemtzow said that “I hope we’re talking about all of the above,” and in any case, HVAC will play a prominent role.

However, at the moment, the decarbonization rising star remains the heat pump.

“Although heat pumps are not significantly prevalent in the U.S. commercial market today, it will become increasingly critical for contractors to understand what’s required for installation and servicing of the newer versions of these heat pump technologies,” said Drew Turner, global marketing manager for Danfoss. “Water-to-water heat recovery heat pumps will, in all cases, be a more efficient solution than air-to-water, resulting in additional decarbonization.”

Turner explains that this depends on contractors being prepared to properly incorporate potential heat recovery heat sources, which might include “groundwater, surface water, wastewater, and symbiosis cooling system heat recovery.”

Turner sees both the need and opportunity in contractors expanding their scope to cover that area of expertise and skill.

The evolution of smarter building controls has also contributed significantly to emissions reductions and will remain critical for buildings and the contractors who work on them. And of course, getting up to speed and comfortable with using A2L refrigerants safely is a must.

“The ability to meet the local codes with these fluids should start in 2024, and it would be best to start now on the associated training and certification requirements,” Turner advised.

“We have concerns that the full impact of total electrification has not been thoroughly considered, and that a ‘one-size-fits-all’ approach is not appropriate for the diverse building stock found throughout the United States.”
— Jim Kendzel
Director of codes and standards American Supply Association

How this all plays out will vary from region to region due to a number of variables. Danfoss expects air-to-water heat pumps to do especially well in the southern and central part of the U.S. while offering “significant decarbonization potential.”

Legislation and incentives will be key variables from area to area.

On the incentive side, “New York [City’s] Local Law 97 has been the most ambitious and innovative building decarbonization development in years,” said John Sheff, Danfoss director of public affairs.

“The law places a cap on building emissions and doles out steep fines ($268/ton of CO2) for every ton of CO2 a building is over that cap,” he said.

That penalty has teeth and “could result in millions of dollars in fines” for commercial landlords, so he expects the law to be an effective motivator to pursue improvements (and vendors who can implement them).

Not only does compliance start in 2024, but the cap will lower again in 2030, a common date for various emission reduction goals. Sheff noted that this law will apply to 50,000 buildings and nearly 60% of the city’s building space.

On the legislative side, the trend of local bans on natural gas hookups is where contentions start to rise about the size of the electrification bucket compared to the others. Richard Russell, Republican staff director for the Senate Committee on Energy and Natural Resources, spoke at the recent AHRI webinar. 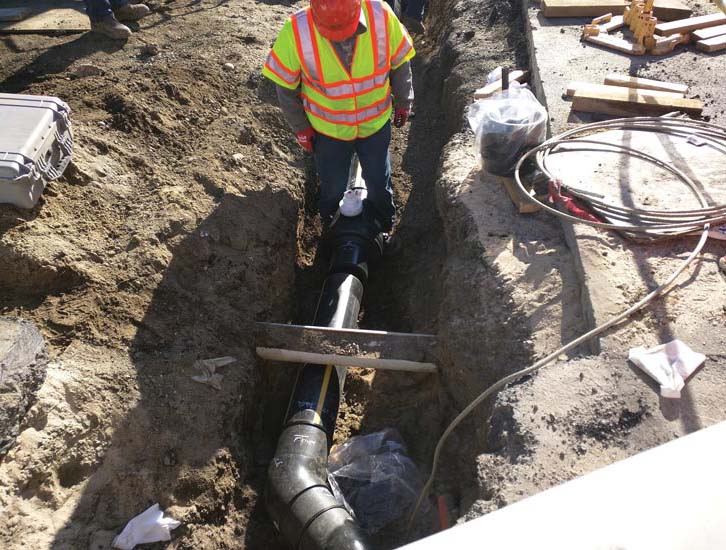 DOWN BUT NOT OUT: Scenes like this natural gas line installation in New York City may decrease in light of natural gas hookup bans, but the fuel will maintain some role despite significant electrification. (Courtesy of MTA.Info/Flickr)

“It’s unfortunate that some localities are doing things like banning natural gas. Because in many instances, natural gas is the more efficient option,” he said. “I think it’s a misunderstanding of how to make the locality more environmentally friendly when it really ends up doing the opposite.”

Jim Kendzel, director of codes and standards for the American Supply Association, recently said that “we have concerns that the full impact of total electrification has not been thoroughly considered, and that a ‘one-size-fits-all’ approach is not appropriate for the diverse building stock found throughout the United States.”

“However,” he observed, “that could take years to happen, and I do not believe that local regulatory bans of natural gas are the answer.”

It turns out that the phrase uttered dozens of times as the HVAC industry waited on a federal HFC phasedown thumbs-up has found new relevance as decarbonization gradually transforms from concept to details on the ground.

“States need to avoid a patchwork of regulations and provide business owners with a smooth transition to decarbonization.”

The decarbonization effort hits a couple of other obstacles specific to the commercial buildings sector. For one thing, even the electric heat pump has a drawback.

Danfoss describes the equipment as the more preferred choice in many instances but recognizes that “while more efficient, [it] often offers an ROI payback period that is somewhat longer than many organizations require to justify investment.”

It’s common to think of the challenges in retrofitting existing stock, but Leung pointed out another divide that could hamper progress in new commercial construction.

“The builder or owner of a newly constructed building may not install the most energy efficient appliances or equipment, whereas the buyer or renter will be responsible for paying the energy bill. This split incentive tends to favor lower upfront costs despite the net lifetime savings that could be achieved through greater energy efficiency.”

To make decarbonization effective, retrofitting the grid is mandatory.

Danfoss’ Turner explained that one challenge “is resiliency, resulting from the disconnect of supply and demand based on renewables’ periodic unavailability.”

Energy storage and demand response are counters to this problem. The former includes batteries, pumped hydro, and thermal storage, he noted.

That will take federal, state, and utility contributions, he said, along with building efficiency gains so that the reliance on renewables can remain moderated.

Sheff said that elements like the bonus depreciation provision in the 2017 tax law could help to bridge the gap between environmental goals and what an owner might see as practical for return on investment.

The CLEAN Future Act, a recently announced proposal on Capitol Hill, would include a “Clean Energy and Sustainability Accelerator.”

That would see $100 billion in funding to “provide financing for low- and zero-emissions energy technologies, climate resiliency projects, building efficiency and electrification, industrial decarbonization, (and) grid modernization” in private and public projects.

In a recent White House online event about decarbonization, Secretary of Energy Jennifer Granholm emphasized the need for “collaborating with our industry partners.” She also noted that the decreased cost of solar and possible similar trend for hydrogen and battery technology expands the realm of what is possible.

At the same event, EPA Administrator Michael Regan said “decarbonization is a big task, but an essential task,” adding that public/private partnership can “accomplish more than we could through regulation alone.”

Paul Camuti, executive vice president and chief technology and strategy officer for Trane Technologies, was also on that call and described decarbonization as generating “durable jobs throughout the whole value chain,” with much if not all of the technology already present in the U.S.

For the moment, figures in public and HVAC industry positions of influence are showing enthusiasm and outlining avenues for tackling decarbonization on a scale necessary for it to make sense.

Still in its early phases, the decarbonization wave will continue to unfold across local, state, and national policy decision-making. Ramifications will vary, but longer-term success may favor commercial contractors who make preparations not just to tread water but to let the wave lift their business and its opportunities as it arrives.