This website requires certain cookies to work and uses other cookies to help you have the best experience. By visiting this website, certain cookies have already been set, which you may delete and block. By closing this message or continuing to use our site, you agree to the use of cookies. Visit our updated privacy and cookie policy to learn more.
Home » The Commercial Refrigeration Industry Is Preparing To Move To Lower-GWP Refrigerants
NewsHVAC Commercial MarketRefrigerationRefrigerants

How will the industry respond to the impending refrigerant transition?

The pandemic has resulted in changes that will likely affect the commercial refrigeration industry for some time. The first part of this article (published Feb. 8) looked at some of those changes, which include supermarkets’ continuing need for additional refrigeration and cold storage space in order to handle the influx of online orders and deliveries, as well as the emergence of ghost kitchens, which will require refrigeration and freezer capacity.

While these are important issues that will continue to resonate in the industry for the foreseeable future, another topic of utmost concern is the impending transition to lower GWP refrigerants. Thanks to inclusion of HFC phasedown legislation in the recent Omnibus and COVID relief bill signed into law late last year, a new presidential administration, as well as regulations taking place at the state level, the focus on phasing down the use of HFCs in commercial refrigeration equipment will be top of mind this year for most manufacturers, contractors, and food retailers.

California has been working on regulations designed to reduce HFC emissions for several years. Last December, those regulations were finalized when the California Air Resources Board (CARB) voted to phase down the use of HFC refrigerants in commercial and industrial stationary refrigeration units (including ice arenas), as well as commercial and residential air conditioning equipment. In particular, refrigeration systems used in grocery stores will be impacted.

Under the new regulations, starting on Jan. 1, 2022, there is a 150-GWP limit for new or fully remodeled facilities in California that utilize commercial refrigeration equipment containing more than 50 pounds of refrigerant. For existing facilities, there are varying requirements that depend on the end use and the number of facilities owned. Store owners will eventually need to get the weighted average of their company-wide refrigerant inventory below 1,400 GWP. For new air conditioning equipment sold in California, a 750-GWP limit takes effect Jan. 1, 2025, while VRF system manufacturers have until 2026 in order to comply with the new limit. 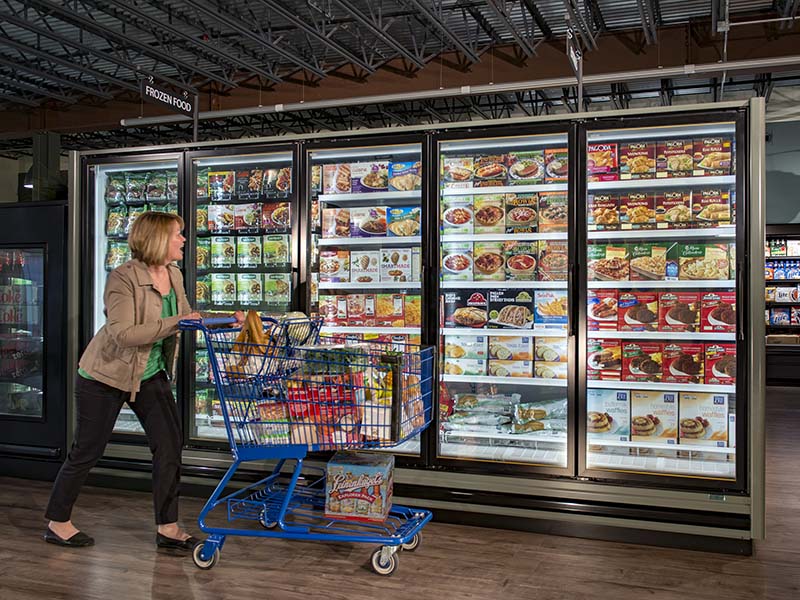 While there has been activity at the state level, the status of refrigerants at the federal level was stagnant for several years, without EPA having authority to regulate HFCs, said Andre Patenaude, director, solutions integration, Cold Chain for Emerson Commercial & Residential Solutions.

That changed with the recently passed American Innovation and Manufacturing Act of 2020 (AIM Act). This gives the Environmental Protection Agency (EPA) the authority to phase down the consumption and production of HFC refrigerants and establish sector-based limits.

All eyes are still on California, though, as CARB moves forward with its HFC phasedown initiatives, said Patenaude.

“Climate Alliance states have already vowed to follow California’s lead, and they are the most likely to continue developing legislation to enforce these commitments,” he said. “The new federal mandate will hopefully simplify HFC phasedowns and remove the burden from individual states. We could even expect to see the adoption of new rulemaking from the Environmental Protection Agency (EPA) via its Significant New Alternatives Policy (SNAP) program.”

Ozzie Missoum, director of technical development at Hoshizaki America Inc., agrees that the U.S. has lagged behind in terms of a federal low-GWP refrigerant policy, but that is changing.

“Sooner or later most of the states will follow California, and it would probably be easier for manufacturers to make one SKU for the whole U.S. instead of making different models for different locations,” he said.

California’s new regulations, along with the new federal refrigerant regulations, will present opportunities for manufacturers that have already developed lower-GWP solutions. For example, Emerson has been qualifying its compressor lines to use a variety of lower-GWP refrigerants for more than a decade; Hoshizaki has implemented R-290 changes for its reach-in units; and Zero Zone has offered CO2 refrigeration systems for several years.

Grocers will also have the opportunity to use small distributed condensing units, such as Zero Zone Edge™ Distributed Systems, which use less than a 50-pound charge of non-flammable refrigerants with a GWP lower than 1,400, said Bruce Hierlmeier PE, director of regulatory compliance and refrigeration technology for Zero Zone Inc.

“Some retailers already made this choice, and we expect more to gravitate to distributed systems,” he said.

With the focus once again on a phase down of HFCs, some food retailers are naturally feeling anxious about selecting the “right” refrigerant and system design for their new and existing facilities, said Carl Petersen, marketing and advertising manager at Zero Zone Inc.

“This anxiety is due to the vacillating nature of EPA regulations in recent years, as well as the trend of more and more states initiating their own regulations,” he said. “Right now there are 24 states committed to HFC phase downs, with 15 of those states either proposing or approving a rule to phase down HFCs. That can get pretty daunting for those charged with selecting refrigerants, especially chains that operate in multiple states that may have differing regulations. That is why Zero Zone maintains an informational document entitled The State of Refrigerant Regulations, which tracks these regulations by state.”

Even though food retailers may be anxious about the imminent phase down of HFCs, most are moving ahead with plans to transition to low-GWP refrigerants.

“I think every company has started working on transitioning to low-GWP refrigerants with different degrees of progress, which could include research, testing new equipment, or implementing field tests,” said Missoum. “So far, there is no consensus on what that low-GWP refrigerant will be, so they are all working on different ones, depending on the application.”

While more food retailers are establishing corporate sustainability objectives that target refrigeration, the urgency to make the transition to lower-GWP refrigerants is driven largely by local or regional regulatory mandates, said Patenaude.

“In California, for example, retailers have been shifting to lower-GWP refrigerants for several years, because CARB banned the use of R-404A in new or retrofit centralized systems in 2019,” he said. “And starting on Jan. 1, 2022, much greater GWP reductions will be required in California. As a result, in California at least, natural refrigerant-based systems — such as CO2 transcritical boosters — are often considered leading options for compliance in new facilities. In other parts of the country, retailers haven’t yet faced the prospect of these restrictions.”

This year will likely be busy for all HVACR contractors around the country. Those in California will be helping their food retail customers prepare for the new CARB regulations that take effect next year, and the refrigerant transition may keep contractors in other states busy as well. All will be working hard to ensure their customers’ refrigeration systems are operating at peak performance during these unprecedented times.