Schools Look to Invest in HVAC as Officials Mull Reopening

The ability of schools to reopen has become a prime concern as the new school year quickly approaches. School districts across the country are attempting to ease the nerves of worried parents with plans for social distancing, personal protective equipment usage, and stringent cleaning protocols. But one of the most effective solutions also comes with the highest price tag — improving the HVAC systems.

School budgets are often squeezed, and HVAC falls behind other priorities. The federal General Accounting Office (GAO) recently found that 41 percent of school districts across the country need to update or replace HVAC systems in at least half of their schools, representing about 36,000 schools nationwide that need HVAC updates. The same GAO study found security and access to technology ranked above replacing HVAC systems.

The coronavirus pandemic might change those priorities. Several districts already announced plans to invest in the HVAC upgrades necessary to slow the spread of coronavirus. Denver Public Schools, for example, will spend $4.9 million for HVAC improvements and maintenance at its 150 buildings.

The Framingham, Massachusetts, school district is considering a plan to spend about $700,000 to upgrade and improve the HVAC systems in its buildings to help slow the spread of coronavirus. In a letter to the school board, the buildings staff proposed upgrading the filters in air handlers to MERV-13 from MERV-8, installing needlepoint bipolar ionization systems, and purchasing single-space high-efficiency filtration systems for classrooms without HVAC. The district’s HVAC systems are fairly new, with most having been upgraded in 2011.

Another Massachusetts school district, Canton Public Schools, had been replacing its HVAC systems as part of a multi-year capital plan. When the air handler unit arrived for the high school in July, the district took the opportunity to tout its efforts to protect students via improved filtration. The district has doubled its usual changing of filters from two times per year to four times per year.

“Canton Public Schools benefits from the ongoing attention to the maintenance of its air quality equipment,” said Superintendent Jennifer Fischer-Mueller. “Now we are seeking to make it even better, knowing that the safety of our students and staff is of the utmost importance.”

Dale Jackson, owner of Jackson Services in LaGrange, Georgia, recently worked with the local school district, Troup County, to upgrade its HVAC systems before the pandemic. The district invested in bipolar ionization at most schools as part of the project.

“Our school system has been really ahead of the times,” Jackson said. “They’re very happy about that now.”

Some schools didn’t get the IAQ units, however, due to cost overruns. Jackson expects schools to have different priorities going forward.

“That will probably be the last thing to get cut out of the budget,” he said.

Jackson also sits on the board of a private Christian school. He added bipolar ionization and UV lights to that facility this summer.

These upgrades follow the recommendation of the American Society of Heating, Refrigeration & Air-Conditioning Engineers (ASHRAE). Corey Metzger, P.E., leads the schools team for ASHRAE’s Epidemic Task Force. Metzger said improving ventilation and filtration appear to be the most critical steps that can be taken in the short term. The ability of schools to do that varies by the age of building. Newer buildings may need few modifications while older buildings may require significant investments. 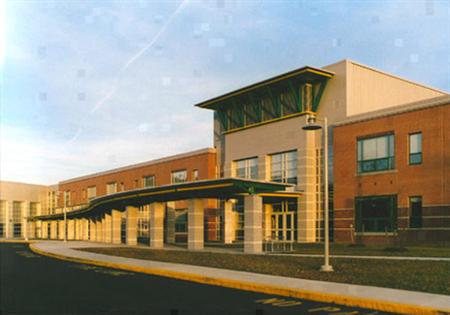 UPGRADE: Experts believe upgrades to schools like Cameron Middle School in Framingham, Massachusetts, should be fairly easy. Older schools will have a harder time.

The cost of potential upgrades ranges from nearly nothing to as high as $50 per square foot, Metzger said. Even if school districts come up with the funds, time plays another factor if they want to open this school year.

“The more significant changes are not feasible prior to the start of the coming school year and would likely take more than a year to implement given the time required for design and construction,” Metzger said.

One recent school project shows the kind of upgrades that can be made to a school’s HVAC system to prevent the spread of contaminants, either biological or chemical. Elliot Gall, an engineering professor at Portland State University in Oregon, worked with the city’s school district to improve the indoor air quality at one of its middle schools. Harriet Tubman Middle School is housed in what had been an abandoned facility. Tubman students mainly come from one of the city’s largest Black communities. While advocates pushed for the school’s redevelopment as a way to better serve these children, the building’s location presented a major challenge. Tubman sits right off Interstate 5, one of the Northwest’s busiest highways. 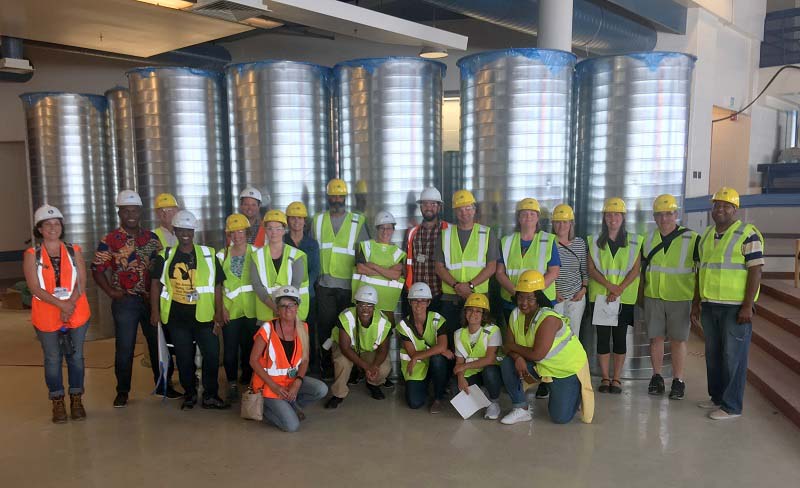 BREATHING EASIER: A group of parents, teachers and staff toured Harriet Tubman Middle School in Portland, Oregon, and pose in front of pieces of the HVAC system that was being installed. The system was designed to improve IAQ and should help slow the spread of coronavirus.

Gall and colleague Linda George started working with the school district in 2018. George specializes in outdoor air quality, while Gall specializes in indoor air quality. Gall said he reviewed many options and consulted ASHRAE guidelines throughout the project. His goal lie in recommending a system that provided the best outcome in a sustainable way.

Gall settled on a system on enhanced filtration. The plan places MERV-16 air filters with a MERV-8 pre-filter in the air handlers. It also uses a bank of actualized carbon to capture volatile compounds. This means the system traps both particles and gases.

“MERV filters have a long history of use and the school district was comfortable with initiating a maintenance protocol,” Gall said.

The new system turns over a lot of air without relying on an outdoor source, Gall said. That was crucial for Tubman, but other schools could get by with a less extensive upgrade. Gall said many existing systems at schools can upgrade to at least MERV-13 filters, which are also effective in blocking particles.

The Tubman project demonstrates the need for a skilled contractor. Gall said the Portland school district hired a really good mechanical contractor who was comfortable with working on the upgraded system. However, his experience with high-end filtration was limited. Other districts might have a harder time finding someone to do the work.

Upgrading air filtration should help prevent the spread of coronavirus in schools, when used in concert with other precautions, Gall said. Even after this pandemic subsides, investing in IAQ helps students, according to several studies. And many schools in the poorest areas of a district need the most IAQ investment.

“It’s a pervasive problem, not just in the United States but around the world,” Gall said.