Air-to-water (ATW) heat pumps and air-to-air (ATA) heat pumps are cousins. At least, that is how they are described by Dennis Schramel, national sales manager of Electro Industries Inc. in Monticello, Minnesota.

“Air-to-water heat pump systems work in similar fashion to their forced air cousins, the air-to-air heat pump; however, air-to-water captures heat through a refrigerant and instead transfers the heat to water via a coaxial coil or heat exchanger,” he said. “These systems are capable of producing 110°F or slightly higher water temperatures.”

Divided into two primary types — monobloc and split system — ATW systems are ideally suited for low-temperature delivery such as radiant floor heating applications that do not require temperatures over 120°F.

The monobloc system is self-contained with pre-charged refrigerant.

“Basically, these types utilize water lines from outdoors to indoors instead of using a refrigerant to transfer heat,” explained Schramel. “It is vital to make sure to provide thermal protection with glycol, as the water lines will freeze in colder climates.”

According to John Siegenthaler, P.E., principal, Appropriate Designs, the monobloc units are designed to be placed outside, only requiring a hydronic interface and electricity to be run to the unit.

“The cabinet-like unit should be elevated above the ground at least one foot, especially in a deep snow area,” he said, during the Coffee with Caleffi™ webinar Applying Air-to-Water Heat Pumps in Hydronic Systems. “You don’t want snow covering where the unit fans are, and by getting them up off the ground by at least a foot, conditions for the unit improve as far as grass clippings, leaves, and bugs not getting into the systems.”

The second type of ATW heat pumps is a split system. Schramel said that split types mostly resemble ATA heat pumps in that they couple an outdoor condensing unit with an indoor unit consisting of a coaxial coil commonly found in geothermal systems.

“The advantage of split type systems is that the contractor can use his preferred brand of condenser in either single-speed or variable speed heat pumps,” he explained.

Siegnthaler noted that typically the compressor is in the outdoor unit of a split system but cautioned that this is not always the case. A refrigerant lineset and electricity must be run between the indoor and outdoor units. There isn’t a danger of water freezing, however, as there is no water in the outdoor unit and no need for antifreeze.

The Environmental Protection Agency (EPA) bestowed the Energy Star® Emerging Technology Award to ATW heat pumps last year. The technology has continued to improve as it makes new inroads in the North American market. More widely used in Asian countries such as China and Japan, the systems also have a strong market in Germany and Canada. The North American market is slowly catching up as contractors embrace the coefficient of performance (COP) race developing in regard to energy savings and environmentally friendly heating and cooling technology. 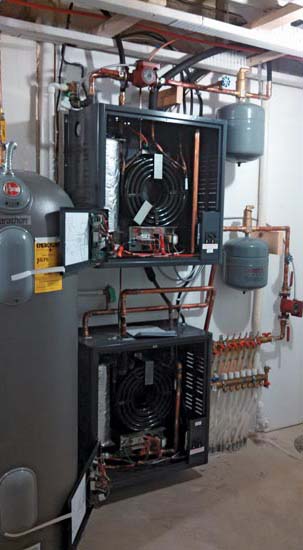 HEAT PUMP INSTALL: This is a 2 to 5 ton NorAire air-to-water heat pump system. The condensing units are located outdoors.

The COP of heat pumps helps contractors prove to their customers the efficiency levels and energy savings, but the formula can be calculated in different ways depending on what factors are included. For example, the COP is derived from the heat output in Btu/hour, divided by the electrical input after multiplying it by 3.413.

“It’s the ratio of the output energy, which is the useful product of the heat pump, divided by the electrical input,” said Siegenthaler. “The higher we can get the coefficient of performance, the more energy we are getting per kilowatt hour of electrical input.”

With a quicker return on investment and competitive efficiency ratings, the market is slowly providing expanded growth opportunities to the ATW heat pump market. Schramel explained that ATW heat pump systems can also provide air conditioning through a chilled water air coil via either an air handler or gas furnace.

“The other method is utilizing PEX piping to deliver radiant floor cooling,” he said. “Although the latter seems like the best way to go, further training and calculations and good understanding of radiant cooling systems is vital to customer satisfaction and performance.”

He cautioned that not all regions of the country are suited for radiant cooling due to their humidity levels, noting that dewpoint controllers are a must to avoid humidity issues.

As ATW heat pump adoption rates continue to climb, training solutions have become important for more than just contractors. Schramel said that it is necessary to train the entire supply chain, from sales reps and wholesale distributors to contractors, builders, and ultimately the homeowner. 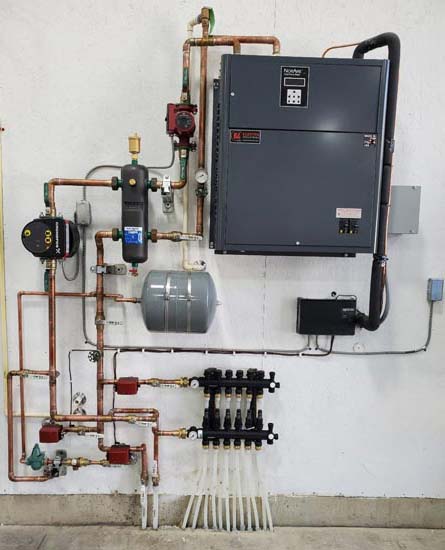 DIFFERENT SET UP: This is a 1 to 5 ton NorAire air-to-water heat pump system. The condensing unit are located outdoors.

“Each level needs to know the limitations of air to water systems and know what applications work best,” he explained. “Some can heat domestic hot water, where others may need to rely on backup heat, thus reducing overall efficiencies.”

Of the two type of ATW systems, the precharged monobloc can be considered more plug-and-play than the split system. The split system is a relatively straightforward install as long as contractors have a good understanding of working with refrigerants and knowledge of radiant heating systems, said Schramel.

“Regardless of type, a contractor must not overpromise on the air-to-water heat pump’s ability to meet every hydronic application,” he added. “Surely a contractor will get customer pushback for installing an air-to-water system to an existing high-temperature baseboard or radiant application.”

Siegenthaler trains contractors and technicians in the installation and maintenance of ATW heat pumps and said that it is not OK to simply swap out a boiler for a heat pump and assume that the output device will work properly.

“This is because of different design temperatures,” he explained. “I suggest using heat emitters such as radiant panels; some of the high-output baseboards; and some panel radiators, especially panel radiators that have low power fans built into them. These types of products are ideally matched with these heat pumps.”

Where the heat pump market will go in the next three to five years remains to be seen, but there are some interesting developments occurring in both foreign and domestic markets. One of those is the usage of indoor ATW heat pump systems. Although not widely used yet, these systems have been designed much like the monobloc but operate indoors. This removes the issue of being exposed to outdoor conditions and debris.

“There is no outdoor equipment beyond air intake and discharge grilles,” said Siegnethaler. “There is less potential to freeze the water contained within the heat pump, too.”

He did note that this type of system requires more interior space and brings the compressor sound within the structure. Manufacturers like Dimplex in Germany, however, are working on these issues and have developed a corner-unit interior ATW heat pump.

“We are only at the beginning to see the air-to-water technology take off in North America, which is typically a late adopter to this technology that is long proven in Europe and Asian markets with millions of units sold annually,” said Schramel. “The world continues to move towards decarbonization and its reliance on fossil fuels. Depending on electric rates, air-to-water systems and their high-efficiency capability will rival natural gas operating costs.

That will also give way to providing lower energy costs to rural markets that are presently dominated by fuels such as oil, propane, and electric resistance heating systems.”