Balancing Firm Serves on the Frontlines of Coronavirus Outbreak

The “V” in HVAC stands for ventilation, but this aspect of the business often gets little attention, even within the industry. During the coronavirus outbreak, however, ventilation became the key aspect of systems in hospitals as balancing firms worked alongside healthcare staff on the frontlines. One of those firms, Fisher Balancing Co., found itself playing this crucial role in one of the nation’s hardest hit regions.

Headquartered in Williamstown, New Jersey, Fisher has long focused on providing testing and balancing to the healthcare market. Fisher technicians measure airflow with calibrated equipment and then set the pressure by adjusting the ventilation system to meet the facility’s needs and requirements. Fisher is a signatory member of the local sheet metal union. Fisher executives belong to several national groups, including the National Environmental Balancing Bureau, the Sheet Metal and Air Conditioning Contractors' National Association, and the American Society of Heating, Refrigeration and Air Conditioning Engineers (ASHRAE).

Hospitals present a constant need for testing and balancing, but this need grew dramatically as they expanded specialized units to care for COVID-19 patients. It became crucial to maintain negative pressure in order to keep these patients from exposing everyone at the facility to the disease.

A second need arose as the number of patients rose dramatically in the early stages of the outbreak — turning rooms. Hospitals now called on Fisher to increase air rotations to 12 times an hour so housekeeping staff could enter a room earlier and staff could move in the next patient more quickly.

Jennifer Lohr, a Fisher project manager, watched the news from China earlier this year with concern. Then she started to get calls from the facility managers at hospitals she oversees in the Philadelphia area asking about preparing rooms for a possible increase in demand. The situation escalated quickly after that.

“Nobody is prepared to work through a pandemic,” Lohr said. 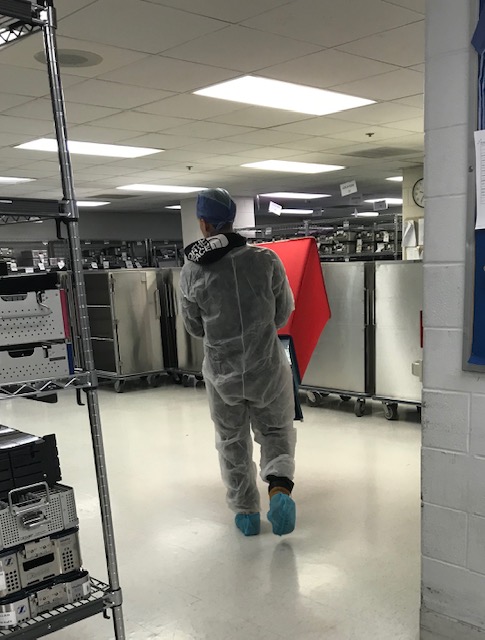 STAYING SAFE: Fisher Balancing Co. made sure its staff was properly garbed in personal protection equipment to ensure they kept working during the coronavirus outbreak.

She described the work as what they do every day, but at a much faster and more intense pace. All the Fisher staff worked overtime to help hospitals get ahead of the projections the early models provided. Staff were properly outfitted with personal protection equipment (PPE) and no one fell sick, Sano said. Neither did any family members. Some Fisher workers had systems at home to strip and shower before interacting with family.

Not all balancing firms could offer the same services as Fisher. Some lacked the basic skills, and in some cases, staff refused to take on the extra risk. Sano said his employees understood the role they played.

“There’s an individual, personal commitment that you will stay on the frontlines,” Sano said.

Still, there were some tense moments, especially early on. Jeffrey Schools, Fisher’s vice president, was working at Abington Hospital in Pennsylvania with his son when they heard a nurse tell another that a positive coronavirus case was on the way in an ambulance. Schools’ son grew concerned, but Schools reassured him they would stay away from that person. They stayed and finished the work.

That hospital already operated 28 isolation rooms on its east side. Fisher confirmed the negative pressure of those rooms and then tested 28 rooms switched over on the west side of the hospitals. These extra rooms were built during the anthrax scare from 20 years ago.

Many hospitals lack these kind of facilities. Fisher worked on flipping a lot of patient rooms “upside down,” turning them from positive to negative, said project manager David Wood. Newer rooms were easier to change over than older ones.

The surge of patients and the anticipation of even more made for long days for Fisher staff. Lohr said she would go into a hospital early in the morning, get a list of rooms to work on, and set to her tasks.

“As the day would go on, the list would get longer,” she said. “We would just work until we were done. We did a couple of 24-hour shifts.”

The long hours and the nature of the work create plenty of stress. Fisher staff needed to take extra steps and focus on avoiding certain areas. Wood said they often worked in pairs to watch out for each other. 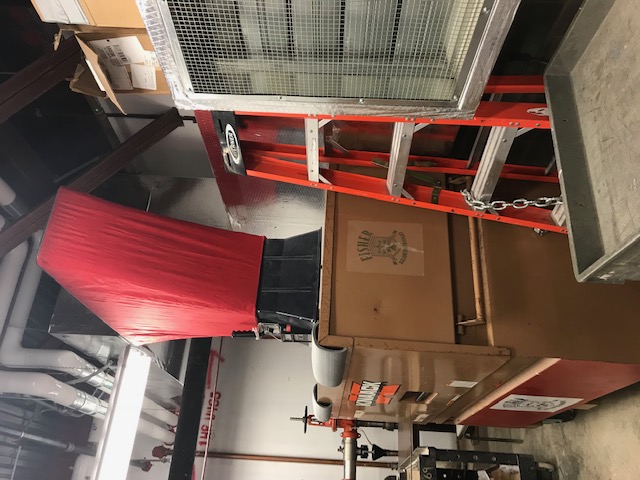 FINISHED WORK: An example of the kind of adjustments balancing technicians make to HVAC systems to control the airflow.

“Basically, your day comes down to just getting through what you’re there to do and not exposing yourself in any way,” Wood said. “You sense the stress the staff is under, you get the seriousness of it, and it’s not easy to forget to be mindful of what you’re doing.”

Hospital staff appreciated the effort. Many cities recognize healthcare workers with a round of applause in the evening. Sano said one day while staff was leaving a hospital, doctors and nurses gave them their own round of applause.

Other types of work emerged as the situation developed. Fisher helped change the balance in waiting rooms. The lack of PPE led to Fisher helping create drying rooms for sanitized masks. Much of the work was done on the fly, and Schools said ASHRAE impressed him with the speed with which they developed new guidelines.

“No one was really ready for something like this,” he said.

The pace of work at hospitals has started to slow. Wood said early plans called for changing entire hospital towers to negative pressure. Those plans were indefinitely suspended as the need failed to arise. Lohr said she no longer passes triage tents when she enters one of the hospitals she works on. She looks forward to spending more time with her husband and their young son.

“I’m very proud of what we did,” she said. “When we got the call, we went where we needed to be and did what needed to be done.”

Now Fisher fields calls from hospitals looking at ways to re-open their surgery centers and other closed facilities. Non-hospital clients are also preparing for re-opening. Sano said he’s already been contacted by casinos and malls about doing inspections of their facilities and helping them figure out their needs for airflow and other methods of preventing spread. 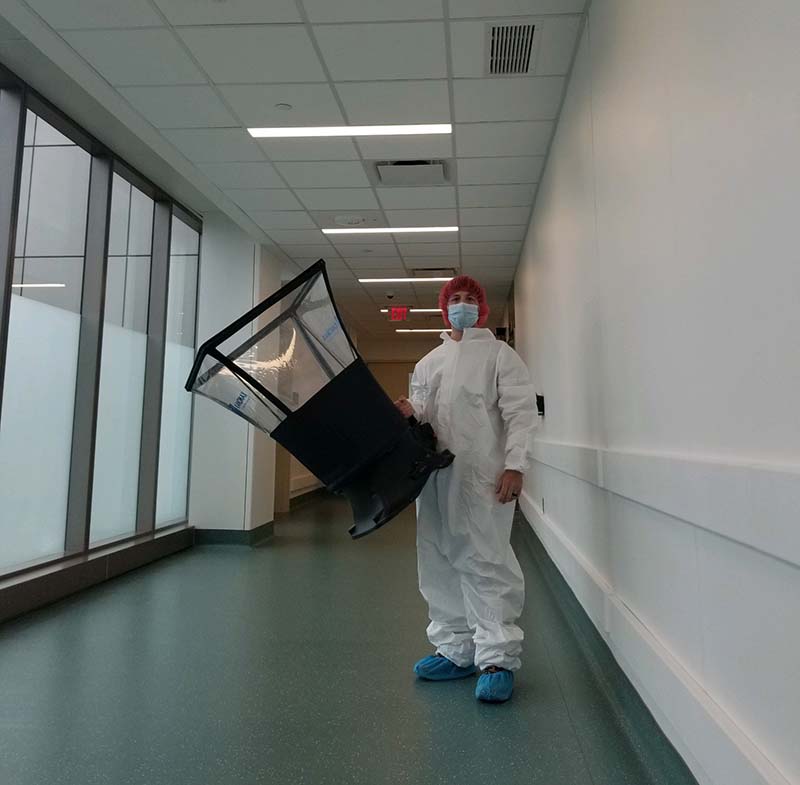 CHANGING THE FLOW: Fisher’s Dane Gresko adds a modification to change the airflow at a Philadelphia area hospital.

It’s uncertain what the demand will look like going forward. While healthcare facilities made up a majority of Fisher’s clients, the firm also worked on a mix of restaurant and retail projects, including several Victoria’s Secret stores. Parent company L Brands announced the closing of 250 locations across North America.

Sano expects engineering to change going forward because owners will want systems prepared for catastrophic events. He’s already seeing contract documents that includes that requirement. Fisher might see more work as states mandate new airflow rules for a range of facilities, including nursing homes. This would prove an expensive change.

“The more exhaust you take out, the more fresh air you have to supplement, so it gets costly,” Schools said.

Ventilation went from a less considered aspect of most buildings to a critical feature, almost overnight. For Sano, the role his company plays was made clear for him the week of March 9. He had a grandson born at Hackensack University Medical Center in New Jersey on March 11, a day after that hospital reported the state’s first COVID-19 death.

“It’s funny how those things touch your life,” Sano said.