This year marks two major milestones for Matthew Holtkamp. It marks 25 years married to his wife, Suzanne, and 25 years heading up Holtkamp Heating and Air in Suwanee, Georgia. The couple started the HVAC firm shortly after their wedding in 1995. Holtkamp said he would have started the company sooner, but he didn’t want to answer calls during the honeymoon.

The Holtkamps both moved to the Atlanta area from the Midwest. Matthew Holtkamp came to work in HVAC in 1985 after receiving his degree from a community college in Iowa. He said the only person he ever met up to that time who wasn’t from Iowa had grown up in Georgia. Iowa was struggling with farm foreclosures, and Holtkamp faced limited options for employment. He called his friend, who had moved back to Georgia, and asked if his firm was hiring. Since Gwinnett County was the fastest growing county in the U.S. at the time, the answer was “Yes.” 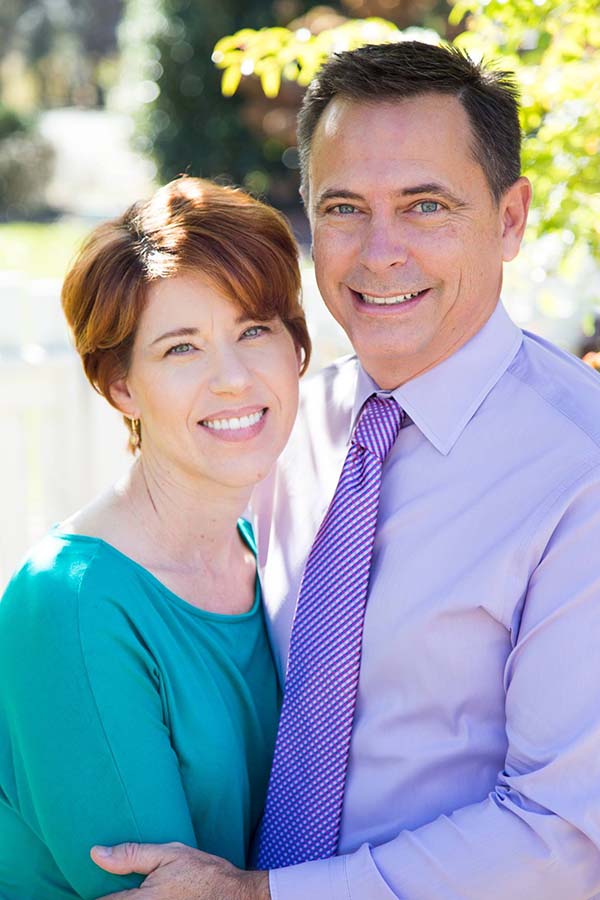 MARKING 25 YEARS: Suzanne and Matthew Holtkamp have spent the last 25 years together as spouses, business owners and even instructors to their two daughters.

It was an unconventional HVAC job, consisting of installing cooling systems for phone lines. Since work started and finished early, Holtkamp took classes at Emory University on how to start a business. Entrepreneurship runs in the family. Four of Holtkamp’s six siblings are self-employed.

Holtkamp put together a 10-year timeline to work at the best companies and learn the best practices at each. Over the next decade, he worked at three different companies in different niche markets.

“I tried to envelop all the best practices of those successful companies into my own,” Holtkamp said.

During this time, he met Suzanne. Originally from Ohio, she graduated from Virginia Tech with a finance degree but entered marketing instead. Suzanne Holtkamp worked for a large advertising agency in Atlanta, dealing with clients ranging from Honda Power Equipment to the men’s tennis tour. She encouraged Matthew Holtkamp’s vision of operating his own HVAC firm.

“We always were and to this day are a great team,” Matthew Holtkamp said.

Holtkamp Heating and Air opened in 1995. Although just starting out, the firm had a secret weapon. Cell phones were still growing as a business tool, and Matthew Holtkamp had one. He found out Bell South offered a feature to forward calls from his office phone to his cell. Competitors were using pagers, so a customer would call the office, get the pager number, dial that, enter a call back number, and then wait.

“I was the only one where they could dial one number,” Holtkamp said.

The business grew quickly, and Holtkamp expected his firm to become a multi-million dollar company with 100 employees. Then came two daughters within two years, and his priorities quickly changed. Instead of growth, Holtkamp focused on leveraging his position to spend more time with his family. The business grew more slowly, which allowed the Holtkamps to homeschool their girls. Suzanne Holtkamp handled the teaching duties most days, but on Wednesdays she set up the next week’s marketing and Matthew Holtkamp taught his daughters about science, often using equipment off his truck.

Holtkamp Heating and Air employs between 15 and 20 people today, depending on the time of year. The firm focuses mainly on residential sales and service, with some commercial and new construction accounts. Matthew Holtkamp enjoys interacting with homeowners and solving their problems. He also likes the steady cash flow from residential service.

“Some people don’t like residential because there are always high expectations on the homeowner’s part,” he said. “They expect a technician to be clean cut and well dressed and wear booties. It’s a whole different service level.”

In 2003, Holtkamp became certified in IAQ, part of a shift to a whole-house approach. He grew frustrated of hearing customers say the promised energy savings never materialized. One high-end unit Holtkamp sold performed worse than its replacement because it was misinstalled and leaked air.

“That would always bother me because I was always a man of my word and if I said something, I wanted it to be true,” Holtkamp said.

Holtkamp decided to take a course through the Comfort Institute. He started out skeptical, but took the group up on its offer to tackle his biggest problem for free. Holtkamp took Comfort Institute representatives out to a house where humidity proved such a problem the floors buckled. They solved the problem, and Holtkamp became a convert.

Hardly anything he sells hasn’t been tried on his own house. The house was even featured in a local magazine that profiled its energy efficient features. Holtkamp Heating and Air maintains a high profile in the local community. Part of this comes from the firm’s dedication to giving back.

In 2008, at the height of the financial crisis, the local food banks were running out of supplies. The Holtkamps decided to have their techs go around and collect food. That proved impractical, so they created a voucher on the company’s website. For every 2,000 items delivered to a food pantry, a non-profit group received a $200 check. This program collected 80 tons of food over the next five years.

The Holtkamps switched their focus after that to a variety of causes, including a group that provides water systems in Nicaragua. Then they found a new way to donate by providing the heating and air services to a local theater. This led to a dedication to supporting the arts, inspired in part by their oldest daughter, a recent graduate with a musical theater degree. They also work with an enterprise called Special Kneads Bakery that employs adults with mental handicaps. The Holtkamps recently offered products from Special Kneads as a way to salute frontline workers during the coronavirus outbreak. 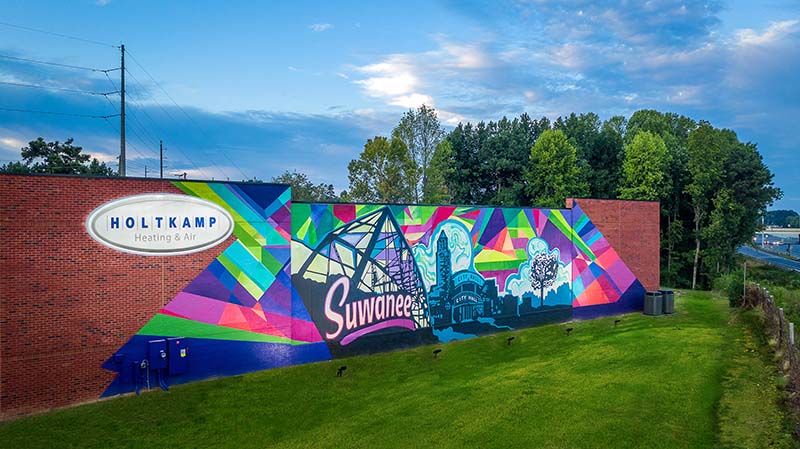 WORK OF ART: Holtkamp Heating and Air supports the local arts community, even covering the firm’s building with colorful murals.

The connection with the arts helped raise Holtkamp Heating and Air’s profile in another way. The firm’s building features murals on each outside wall.

“There are a lot of people who know our building because it’s bright and beautiful with the huge murals on the side,” said Ashley Brock, Holtkamp Heating and Air’s office manager.

Brock was reminded on the company’s high profile when she took a relative to the doctor and the nurse recognized her shirt. She herself initially applied to Holtkamp Heating and Air when she saw an ad online and recognized the company from its many billboards. Brock came from the restaurant business and started as a dispatcher before moving up to office manager.

Alex Mitek came from retail and now serves as operations manager after a stint in sales. After working for large corporations his whole career, Mitek appreciates the personal touch at Holtkamp Heating and Air.

“You get more of that family feel,” he said. “Even when I was in sales, (Matthew Holtkamp and I) talked frequently.”

Holtkamp tries to create a family atmosphere. Every month, he takes his workers and their families to a fun event, such as bowling or laser tag. Despite the family atmosphere and name recognition, Holtkamp struggles like many HVAC contractors to find employees. He placed a help wanted banner on the side of the building last year. Holtkamp said the biggest issues are a competitive market and a high burnout rate.

“Our tech school has a wait list for heating and air, but Atlanta is so large they just gobble up the 100 or so graduates,” Holtkamp said. “It’s like they just vanish.”

Finding customers offers as much a challenge as finding workers. The company gets a lot of work through word of mouth and referrals after 25 years. For paid marketing, Holtkamp focuses on pay-per-click and organic SEO, done in part with a marketing firm.

“It’s daunting to think how many leads you need to drive to have a successful business,” Holtkamp said. “That’s the only thing that ever gets tiring — that you constantly have to drive to get that phone to ring.”

“I can’t imagine a heating and air conditioning company not doing financing,” Holtkamp said. “The top-of-the-line systems are very expensive. How could you sell those without offering financing?”

Lately, Holtkamp Heating and Air’s best salesman has been Matthew Holtkamp himself. The owner went back in the truck during the coronavirus outbreak. He found himself right back where he started and enjoying every minute of it.