Lower-GWP refrigerant alternatives can be retrofitted into existing refrigeration equipment

The refrigerant regulatory landscape is changing in the U.S., leaving supermarket owners and operators scrambling to figure out which lower-GWP solution(s) will work best for their specific application. This is particularly the case in California, which is proposing a GWP limit of 150 for new stationary refrigeration systems containing more than 50 pounds of refrigerant, starting on Jan. 1, 2022.

Outside of California, some grocers will likely stick with their legacy HFC (or even HCFC) refrigerants until they are forced to make a change, either through new regulatory mandates or a significant rise in the price of their refrigerant. Many others, however, are looking for ways to incorporate more environmentally friendly solutions, such as HFO blends or “natural refrigerants” such as CO2, ammonia, and R-290. Given that the latter option requires purchasing all new equipment, many grocers are taking a closer look at retrofitting their equipment with HFO blends.

In comparing so-called natural refrigerants with HFO blends, it is important to understand that “natural refrigerant” is a marketing term, said Jordan Smith, executive director of globalFACT, a non-profit group that promotes reduced-GWP solutions. He added that these products are industrial chemicals and undergo intensive processing in order to be brought to refrigerant specifications.

“Hydrocarbons such as propane, butane, and pentane are produced in oil refineries by ‘cracking’ fossil fuels and separating out various byproducts through distillation,” he said. “Carbon dioxide is brought to refrigerant specifications by industrial processing. While ammonia can be produced naturally by decomposition of animal waste, most of the ammonia used industrially is produced by a chemical process and is, in fact, synthetic.”

HFO blends are particularly appealing to grocers, noted Smith, because they can be retrofitted easily and affordably into existing refrigeration systems. Switching to ammonia or CO2 requires investing in all new refrigeration architecture, some of which can be much more complex than existing systems.

“Retrofitting is often the most energy-efficient and cost-effective option to allow end users to move more quickly to products that meet regulatory requirements and limit environmental impact without large direct and indirect costs,” he said. “The greater complexity of so-called naturals like ammonia or CO2 can drive up cost and require longer downtime for retailers, which has a direct impact on their bottom line.”

“While it’s difficult to simply compare refrigerants on an ‘apples to apples’ basis since system design is such a critical factor, in general, HFO-based refrigerants perform quite well in terms of capacity and energy efficiency,” he said. “In some cases, ammonia and hydrocarbons may have high theoretical efficiency but are very limited in applications due to the safety concerns that either limit charge size (flammability risks) or locations and applications (toxicity risks).”

Ammonia systems also tend to have a very high capital and maintenance costs, said Chris LaPietra, vice president and general manager of Honeywell Stationary Refrigerants. As for CO2 systems, they, too, can have high maintenance costs due to complexity, as well as reliability issues. They also tend to consume more energy, particularly in warm ambient temperatures.

“While there are appropriate applications for industrial gas solutions like propane and ammonia, these solutions can pose risks in certain applications and be more costly to install and maintain due to higher pressures and higher risks if leaks occur (e.g., toxicity/flammability of ammonia, high flammability of hydrocarbons, and the high operating pressures of CO2),” he said. “Fluorinated refrigerants, which were originally developed to combat these risks, have lower (or no) flammability and are nontoxic, and offer good efficiency over a wide range of temperatures. Fluorinated refrigerants also provide a broad range of capacity and pressures, which allow for their safe and economically viable use in applications where propane and ammonia and other industrial gas solutions are not the safest or economically the best option.”

“Compared to R-404A, Solstice N40 has demonstrated an average of between 5 to 15 percent lower energy consumption in refrigeration applications in U.S. and European supermarket trials,” said LaPietra. “It can be used in new installations, as well as retrofitted into existing systems that use high-GWP refrigerants such as R-404A and R-507.”

It is important to note that refrigerants can only be retrofitted if they have identical ASHRAE classifications, he added. For example, to retrofit a R-404A system, another A1 solution such as R-448A must be used. (Honeywell’s extensive retrofit guide, including a step-by-step checklist, can be found at www.fluorineproducts-honeywell.com/refrigerants/resources.)

Honeywell also offers Solstice L40X (R-455A), which is designed to replace R-404A. It is a mildly flammable, zeotropic refrigerant with an ultra-low GWP of 146 that can be used in commercial refrigeration applications, including plug-in cabinets, condensing units, mono-blocks for cold and freezer rooms, heat pumps, and chillers, subject to use restrictions. When integrated into appropriate system architectures, Solstice L40X provides end users with a long-term, cost-effective refrigeration solution, said LaPietra.

Given California’s proposed GWP limit of 150 in some stationary refrigerant equipment, Honeywell is continuing to look for more efficient non-flammable refrigerants that meet these stringent regulations. In fact, the company has just received a provisional ASHRAE number for a medium-pressure, <150 GWP, A1 refrigerant.

“R-471A is a blend similar to R-134a with low glide suitable for medium-temperature refrigeration applications or for use on the top end of a cascade system,” said LaPietra. “As a non-flammable solution, it gives refrigerator manufacturers more options where <150 GWP is a requirement. We expect to see some innovative system architectures to accommodate this refrigerant.”

Chemours offers a wide range of Opteon™ low-GWP refrigerant alternatives that can also be used in commercial refrigeration, see Table 2. One of their most popular HFO blends, Opteon XP40 (R-449A) is designed to replace R-22, R-507, and R-404A in existing equipment and has a GWP nearly 70 percent lower than that of R-404A.

“In general, the performance match for HFO blends like XP10 (R-513A) and XP40 (R-449A) versus their incumbents is quite good, since these blends were optimized to match performance and serve a critical need as retrofit refrigerants with minimal cost,” said Allgood. “Many thousands of R-22/R-404A/R-507 systems have been successfully converted to R-449A globally and continue to perform quite well, usually showing reduced energy usage post conversion.” 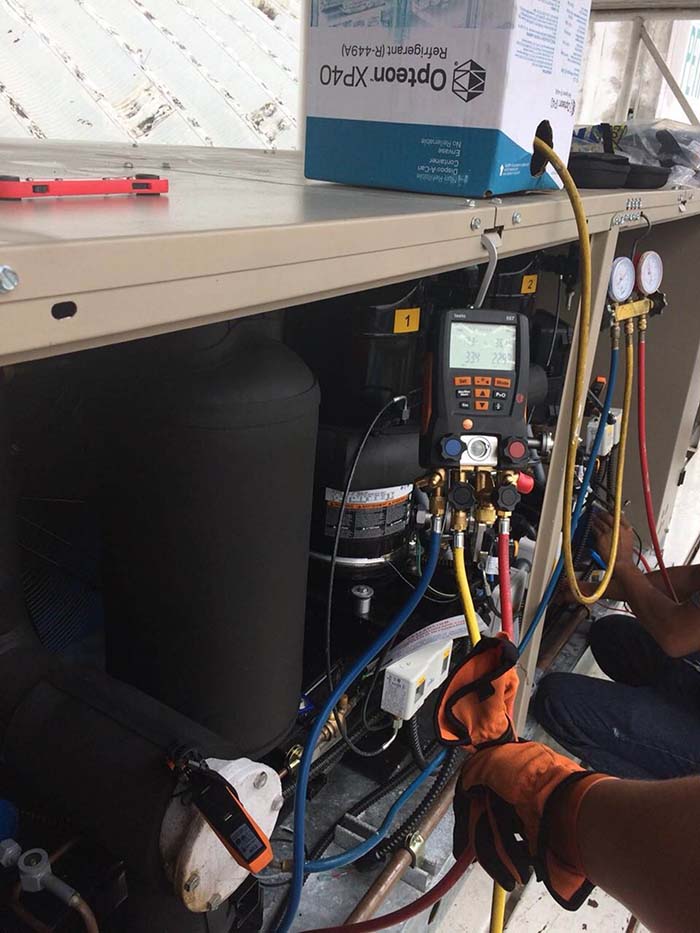 SUCCESSFUL CONVERSION: Many thousands of R-22/R-404A/R-507 systems have been successfully converted to R-449A globally and continue to perform quite well, according to Chemours.

Converting to an HFO blend is a fairly straightforward process, with only a few critical items to consider, said Allgood. These include:

As pressure grows from states such as California to transition to very low GWP (<150) alternatives in new commercial refrigeration equipment, there will be a shift to a range of new refrigerants.

“There are some <150 GWP pure HFOs (e.g., R-1234yf) and blends (e.g., R-454C) that provide excellent performance and can help end users meet California’s low GWP proposal if desired,” said Allgood. “Since most of these ultra-low GWP refrigerants in commercial refrigeration are A2Ls, they need to be used per the appropriate safety standards and building codes. However, systems using the very low GWP HFO blends have already been installed in Europe and are performing quite well.”

Supermarket owners looking to either comply with new refrigerant regulations or just become more environmentally friendly may find that HFO blends solve both issues. These lower-GWP refrigerants offer comparable energy efficiency and, most importantly, can be retrofitted into existing systems, which grocers will likely find very appealing.

HFOs vs. Ammonia and CO2

When it comes to total cost of ownership, HFO-based refrigerants are usually lower cost than the so-called naturals like ammonia and CO2, which often must incorporate complex hardware to either mitigate poor energy efficiency or mitigate safety risks, said Chuck Allgood, PhD, refrigerants technology leader at Chemours.

“Ammonia (R-717) has both flammability and toxicity concerns, which limit its application outside of industrial settings,” he said. “The costs and business disruption due to ammonia leaks, such as alarms, evacuations, emergency response, operations shut downs, contaminated product, etc. is a major concern in the industry.

Due to the cost burden to manage ammonia safely for many public and private facilities, in addition to recent fatalities from ammonia leaks in the ice rink industry, Allgood said that several facilities that previously used ammonia chiller systems are now replacing them with HFO systems. He added that cold storage facilities have also seen the benefits of retrofits and new installations with HFO blends compared to ammonia.

As for CO2 systems, their complexity leads to increased cost for hardware, as well as training, which increases the burden on an already overtaxed technician workforce, said Allgood.

“Often when CO2 system comparisons are made to traditional system designs, benefits are captured due to equipment component differences that are not due to the actual refrigerant properties themselves,” he said.

That is why if grocers are considering replacing their refrigeration equipment, Allgood recommends they consider: