Contractors Weigh Costs, Benefits of Offering Around the Clock Service

Two years ago, employees at CroppMetcalf received an unexpected but exciting gift from their owners at the annual end-of-the-year party. As posted on the firm’s website, Ben Kelley, director of residential operations for the Virginia-based HVAC contractor, stood before the staff and announced the firm was, for the most part, ending its on-call service. Kelley said management made the decision based on employee feedback.

Two year later, the company remains committed to the practice.

“It hasn’t been a negative for our customers, and it’s been positively received by our service department,” Marsiglio said.

Flame does provide 24/7 service during the Michigan winter, but not in the summer. The safety of the house generally isn’t compromised if there is no air conditioning, he said, but it can be if there is no heat. There were a number of reasons Flame moved to this system, but safety placed high on the list.

“We didn’t want to put our people out in the dark working on an air conditioner in somebody’s back yard,” Marsiglio said.

Another major factor was the cost of providing 24/7 service. Flame was paying for staff to be on call and wasn’t seeing the returns. Jennifer Shooshanian, a senior service coach and trainer with Business Development Resources (BDR), said if contractors feel they can’t justify the expense, they should charge more. She compared it to the difference between going to the doctor and going to the emergency room. Consumers know they pay more for that immediate service. She said to consider using the extra money to pay the techs more if the state law allows it. 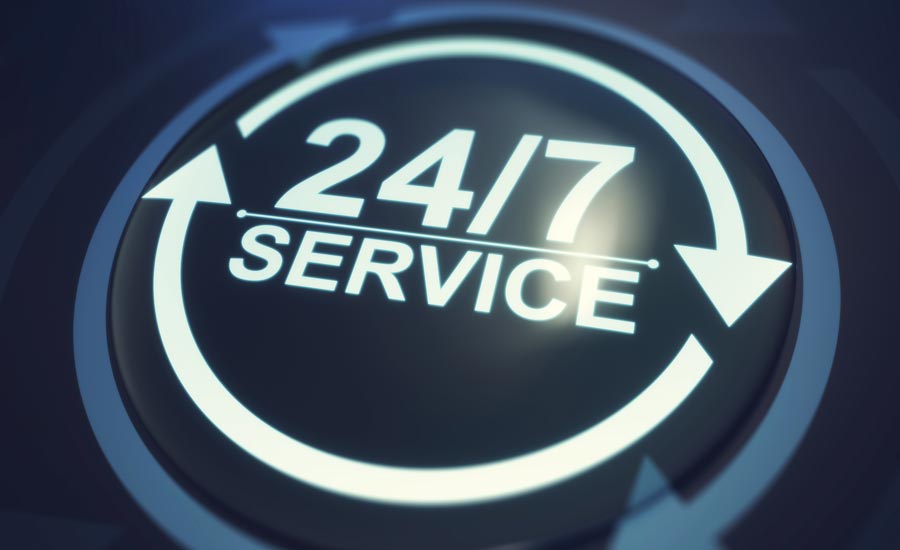 Shooshanian said she hears from contractors on a regular basis about dropping 24/7 service and she understands the thinking behind the move, but she urges caution.

“There are definite pros, but you’ve got to be able to manage the downside as well,” she said.

If there is an emergency, consumers will turn to a firm that does offer 24/7 service. Once that happens, that customer might be lost. It costs $250-$300 to attract a new client, Shooshanian said, so the cost of offering 24/7 service can prove the less expensive option.

Flame does leave availability first thing in the morning for medical emergencies and maintenance plans. The firm dispatches from 8 a.m. to 8 p.m., so they will dispatch somebody at 8 in the morning with a normal charge. They will also dispatch someone in the evening, so if a customer comes home and finds the air isn’t working, they can get a technician at the house.

At a minimum, Shooshanian said, contractors should offer 24/7 service to their maintenance agreement holders — and these customers should pay for it. She said contractors need to do a better job of educating customers about the service offered on a maintenance plan, rather than selling it as a way to get a discount.

Keith Mercurio, director of training for Radiant Plumbing & Air Conditioning in Austin, Texas, said his firm offers 24/7 service to its maintenance contract customers. Radiant limited its on-call offering for the same reason as Flame: to attract and retain employees. During a recent ACHR NEWS podcast, Mercurio said it makes the firm an employer of choice.

“They’re still taking care of their customers,” Mercurio said. “They’re just willing to say that their employees are the most important part, so they’re not going to chase every dollar just because somebody wants service at a certain time and sacrifice the quality of life for our employees.”

There are ways to reduce burnout without reducing on-call service, Shooshanian said. Contractors could reduce the duration each technician spends on-call. The traditional on-call period runs for a full week. During peak season, at least, contractors could shorten it, she sad. There are some techs who prefer to do it all at once, though, so they need to make sure that’s what most of the staff wants.

Contractors also need to figure out ways to reduce the emergencies that require 24/7 service. New technologies could help in this area. Devices with sensor systems will spot developing problems and allow technicians to perform service work during normal business hours.

Doing a better job of screening the calls to determine what is really an emergency and what can be handled without a service call also helps. At Jansen Heating, Air Conditioning and Electrical in Freeport, Illinois, the phone is forwarded every day at 5 p.m. to an on-call technician.

“They’re talking to a tech rather than an answering service,” said Jeff Wagner, Jansen’s owner. “That allows us to troubleshoot potential problems on the phone without sending a tech there.”

This troubleshooting can include questions about the cleanliness of the filter or the situation with the exhaust pipe. This builds trust in the company, Wagner said. Customers realize they aren’t just sending somebody out to collect a service call fee. Both parties save money as a result. The techs get paid $75 dollars for each call. If they have to go out, they are paid normal wages. Some state laws dictate what technicians are paid for service calls.

Shooshanian said she knows one owner who take the afterhours call himself. It can also help to have dispatchers on-call to do this work. Even a traditional answering service can sort through calls, she said.

But somebody has to take those calls, Shooshanian said.