This website requires certain cookies to work and uses other cookies to help you have the best experience. By visiting this website, certain cookies have already been set, which you may delete and block. By closing this message or continuing to use our site, you agree to the use of cookies. Visit our updated privacy and cookie policy to learn more.
Home » Breweries Prove Good Customers For HVAC Contractors With The Right Mix Of Skills
NewsHVAC Commercial MarketBoilers & Hydronics

Although the rapid expansion of the craft or microbrew industry topped off a few years ago, the United States remains on pace to add thousands of breweries across the country, according to the Brewers Association. HVAC plays a key role in these operations, and breweries can provide good customers for HVAC contractors with the right skills.

HVAC first comes into play after brewers turn the grains used to make beer into wort. This is the liquid created by the mashing process. Breweries cook the wort in vats and add hops at this time. The heat comes from a coil wrapped around the vat. These coils fill with steam from a boiler. This is the greatest area of need for brewers and also the hardest area to find skilled tradesmen.

Ray Wolfarth, vice president of Fire and Ice Heating and Cooling in Pittsburgh, has written a number of books about boilers. This brought him to the attention of a local brewery struggling with its system. When he arrived at the brewery, he found multiple problems with the design and installation of the boiler.

“The brewers were not getting results they needed,” Wolfarth said. “The systems were going off on low water and the steam was wet, resulting in unsatisfactory operation.”

The requirements of a brewer are different than those of a commercial boiler, Wolfarth said.

“The brewers use a much higher steam pressure than space heat boilers, typically around 11-12 psig,” he said. “Also, these boilers operate year-round and require regular maintenance. Water treatment is crucial for brewery boilers, as they cycle off during the non-brewing hours and allow oxygen inside the boiler and piping.”

Wolfarth said steam velocity and proper near boiler piping are essential to the brewing operation. Unlike hydronic systems, steam systems require a more holistic design, as parts in one area of the system could affect the operation of the boiler. The problem is many in the brewing industry don’t really understand how steam works — something Wrotham learned firsthand when he attended a meeting and heard an “expert” speak.

“The advice given about the boiler and steam system was all wrong, and I cringed,” he said.

This inspired him to write a new book, titled “Lessons Learned: Brewing with Steam.” A few years later, he followed it up with “Lessons Learned: Maintaining Steam Systems for Breweries.” The books help, but brewers can still be lead astray, even by those who claim to know better. Distributors will sell boilers directly to breweries and many have no idea of how to properly design steam distribution piping. 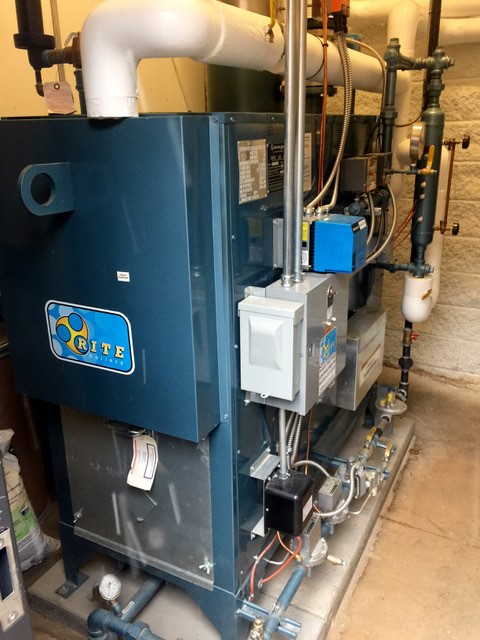 BEST WORT: Low pressure steam boilers are used to cook the wort during the brewing process. Wort is the liquefied grains created by the mashing process.

In addition, the suppliers size the vessels using 14-15 psig steam pressure. A low-pressure steam boiler is rated for 15 psi but should never be operated that high, Wolfarth said, because that would cause the limit control to trip or the pop safety valve to open.

“I consulted on a new project recently, and the company selling the vessels used 14.9 as the operating steam pressure,” he said. “I suggested the owner have them recalculate it using 12 psi.”

Many brewers take what they get because people with the right training and experience often prove hard to find. Slocum is owner of Gage Mechanical in Hockley, Texas. The firm specializes in steam piping and boiler installation. In Texas, that kind of work requires a specific license. Because of this and a general distaste for working with steam these days, qualified workers prove hard to find. 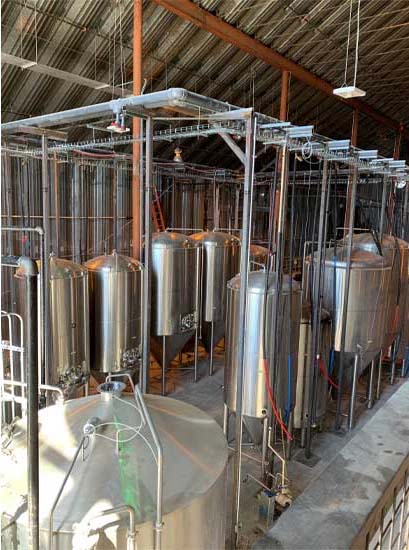 “Your average pipefitter doesn’t get exposed to steam piping and steam systems as much as they used to,” Slocum said.

Slocum became involved with brewers while working for another contractor. When he struck off on his own, he focused on this market and gained business through word of mouth. Gage does residential and commercial work and also subcontracts with firms that lack pipe fitters. But breweries are its area of expertise, as featured on the company’s website.

Gage also handles the cooling needs of its clients. After an hour of cooking, the brew moves to a cooling vessel where yeast is added. The yeast creates two crucial byproducts — alcohol and CO2. In this part of the process, the structure is similar but the coils are filled with glycol. 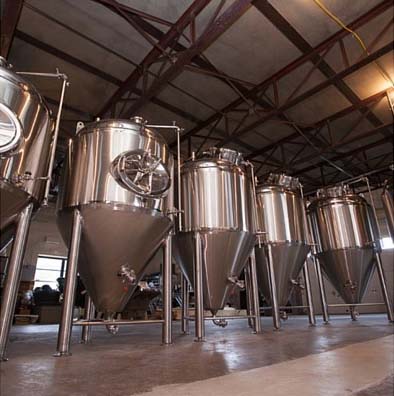 WHERE IT HAPPENS: These tall stainless vessels are where the beer is made. One is a mash tun and another r is a boiling kettle.

Much has changed in the world of craft brewing since Boston Beer Co. upended the beer market in the early ‘90s by taking its Samuel Adams national. New breweries continued opening at a booming pace, even in the past few years, Slocum said. While the pace has slowed lately, demand remains fairly strong, and Gage is about to start a new project for a brewer called Meanwhile in Austin, Texas.

“There are microbreweries still firing up,” Slocum said.

Gage does work all over the state. Brewers tend to locate in trendy urban areas, making markets like Austin fertile ground. Like any start-up business, money often proves tight for microbrewers. Slocum said the founders are usually a couple of people who decide to get into the business and then try to scratch together funding. When successful, they provide more work as they move into bigger facilities, as was the case with Three Nations Brewing Co. in Dallas, another Gage customer. Even then, money remains an issue.

“You can put aluminum jackets on all the piping and give it a good atheistic feel,” Slocum said. “But some of them can’t afford that. It can get pretty pricey.”

Slocum is currently bidding on a distillery project. Distilleries are supposed to be the new breweries, following the same growth pattern, but Wolfarth is still waiting for that to happen.

Brewery growth may have plateaued, but it still provides a good market for those with the right skills and experience. In addition to extra work and challenging projects, there is extra incentive for entering this market — free beer. Both Wolfarth and Slocum said they often receive free samples of the products their work helps produce.

“It’s a cool industry because everybody is so laid back,” Slocum said. “They’ll load my truck if I ask for it.”

In San Diego, HVAC provides a key step for a local brewery in a different way. Late last year, Ballast Point made a limited edition lager made from condensate that drips from the bottom of air conditioning units attached to jet bridges at San Diego International Airport.

The airport started cooling planes via its jet bridge as a way to reduce greenhouse emissions. Otherwise, the jets burn fuel to keep cool while sitting at SAN’s gates. A large amount of condensation develops as a result, and the airport started collecting it in drums. Richard Gilb, SAN’s manager of environmental affairs and planning, said the airport began looking for ways to use that water. They started with obvious uses, like power-washing and cooling, but that only utilized a small amount.

“We were producing more water than we knew what to do,” Gilb said.

SAN currently captures about 100,000 gallons per year from 18 of the most heavily used jet bridges at terminals one and two. So the Airport Environmental Affairs team reached out to Water Works Inc., a local company that specializes in water purification, to treat the water using ozone disinfection and then find a brewer to turn that water into beer. Ballast Point worked with Water Works in the past to make beer from reclaimed water and had a lab nearby, so it signed on as the brewer.

“The airport is always striving to enhance our sustainability efforts and find unique ways to use the reclaimed water we capture,” said Kim Becker, President/ CEO of the San Diego County Regional Airport Authority. “This beer reaffirms our commitment to sustainability in a truly fun and innovative way.”

Ballast Point labeled the beer SAN Test Pilot and sold it at its own locations and a local craft brew store. Gilb said the beer sold out too fast for any sales at the airport. SAN Test Pilot was a Kölsh, a German-style beer.

SAN is currently building a new terminal, set to open in 2024. Gilb said there are plans to work with another brewer to locate an operation at this new terminal and pipe the condensate directly to it.