This website requires certain cookies to work and uses other cookies to help you have the best experience. By visiting this website, certain cookies have already been set, which you may delete and block. By closing this message or continuing to use our site, you agree to the use of cookies. Visit our updated privacy and cookie policy to learn more.
Home » Geothermal Market Growth Hinges On More Than Federal Tax Credits
HVAC Residential MarketHVAC Commercial MarketResidential Geothermal Heat PumpsCommercial Geothermal Heat Pumps

“We just went off a cliff,” said Douglas Dougherty, president of the Geothermal Exchange Organization (GEO). “We lost 50 percent of the market share. Both manufacturers and contractors were laying people off and selling their drilling rigs. It just decimated the industry.”

GEO took its lobbying team and started working with Washington, and in February of 2018, the tax credits were reinstated.

“It didn’t help move the market, though,” said Dougherty. “It just gave the homeowner a check from the federal government, and then we had to spend a lot of time educating people that the credits were back.”

“It just freaks everybody out,” said Dougherty.

He explained that the tax credits not only help overcome the initial upfront costs to the consumer, but that they are also really important because they give the industry time to grow to a sustainable market size.

“We would like to extend the tax credit for five years at 30 percent, and House Bill 3961 is attempting to accomplish this,” said Dougherty. “We have talked to geothermal contractors who said, ‘If I had a five-year certainty of the tax credit and a two-year phasedown, I would open a shop an hour and a half away from me on the west side and an hour and a half away on the east side, and I would create 60 more jobs. Then I would buy vehicles and tools and train these guys. After seven years, I would have enough installs — even if my new installs dropped by 20 or 30 percent — and I’d have enough service contracts to keep my people employed.’”

Dougherty added, “He’s just one of a thousand contractors across the country.”

Despite the role they play in the growth of the geothermal market, tax incentives aren’t going to be around forever, and Jack DiEnna said that it is fine. As executive director and founder of the Geothermal National & International Initiative (GEO-NII) and principal of Indian Rock Associates LLC, DiEnna has spent over 40 years in the geothermal industry as a noted expert and champion of geothermal installations.

“My concern is less about the tax credits and more about who is going to own the ground loop,” said DiEnna. “A large percentage of the cost of geothermal projects are outside in the ground, and that is the major reason geothermal is not more mainstream than its current level.”

He went on to explain that if a utility owns the structure (the same as a gas or electric line), then a geothermal heat pump would be less expensive in theory, because instead of buying a furnace and an air conditioner, consumers would only be purchasing the heat pump.

“The ground loops made of HDPE are guaranteed for 50 years and will likely last about 100 years,” said DiEnna. “If you’re an investor, why wouldn’t you want to own that loop and sell some Btus or lease the loop to you for an amount every year?”

It isn’t only the residential market; the institutional market is also a growing opportunity for geothermal contractors. According to DiEnna, the average school in the U.S. is around 42 years old.

“Every single one of those schools — whether it be university, college, or grade school — is typically not space conditioned; they have heating,” he said. “Harvard just did a study that said the biggest contributors to students’ poor learning is that temperatures are too hot or too cold. Once the geothermal system is installed, the school has the ability to heat or cool no matter what, and it is saving them money and improving the learning environment.”

Dandelion Energy, based in New York City, is a geothermal company on a mission to make geothermal accessible to all homeowners. The company realizes that mitigating the cost of the ground loop could help further the adoption of geothermal heat pumps. 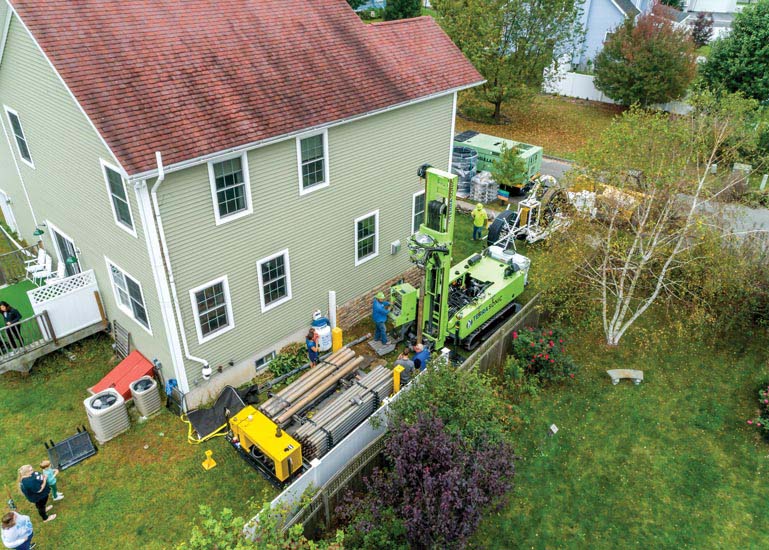 DRILLING IMPROVEMENTS: “The top two initiatives that we are focused on right now are making drilling more affordable by innovating on new technologies like sonic drilling, and creating a turnkey process to make the installation as painless as possible for the homeowner,” said Ilyas Frenkel, head of marketing, Dandelion Energy.

“The top two initiatives that we are focused on right now are making drilling more affordable by innovating on new technologies like sonic drilling, and creating a turnkey process to make the installation as painless as possible for the homeowner,” said Ilyas Frenkel, head of marketing, Dandelion Energy. “More and more homeowners are becoming aware of geothermal via the media and advertising and are asking their contractors to do this work for them.”

Along with the efforts of the company and the increasing awareness, geothermal options are getting a strong push regionally, as New York State is rapidly reducing its dependence on fossil fuel-based heating.

“The over 2.5 million homeowners who still heat with either fuel or propane in New York state are glad that there’s finally an affordable and better alternative to fossil fuel based heating,” said Frenkel. “In New York state, homeowners can take advantage of the ITC tax credit, NYSERDA ground source heat pump rebate, as well as a variety of utility incentives from Con Edison, Central Hudson, NYSEG, O&R, and National Grid.

“We believe the market will continue to grow quickly,” he said.