At a booth thick with traffic on the AHR Expo’s Tuesday morning, commercial product manager Matt Schlegel talked about Johnson Controls’ new York Sun Choice rooftop unit. First orders on the unit had shipped out only a couple of weeks earlier, and attendees were examining the display unit from all sides.

The first emphasis for this model, Schlegel said, involved establishing a footprint that makes it attractive for replacement use. Specifically, the design team delivered a footprint that can replace comparable size units with no transition curb or extra space needed, he said.

The second point of emphasis dealt with new construction. The team wanted to be able to offer a unit that delivers “standard efficiency” at a competitive price, but which can also upgrade to higher IEER with adjustments at a better price than previously available.

Choice is designed to exceed DOE 2018 guidelines by up to 25 percent and surpasses DOE 2023 part-load standards by almost 10 percent, according to the company. Options include a broad range of outdoor air options, including low-leak damper economizers, constant volume powered exhaust, and modulating powered exhaust.

The unit also gives the rooftop a break, weighing in at one third lighter than the company’s existing models.

Moving up in size to the 27.5 to 50 ton range, the York Sun Select RTU seeks to deliver a similar blend of performance and flexibility.

UNIMPEDED IMPRESSION: A clearer look at the YORK Sun Select reveals single-side access to all components.

The company states that, offered alongside the York Sun Premier platform, these Select units offer up to 31 percent greater part-load efficiency than comparable models and up to 15 percent greater IEER than the York Millennium legacy product. Looking ahead, the Select can already exceed DOE 2023 efficiency standards by up to 22 percent, the company said.

All in all, a larger vision has informed and supported these RTU improvements.

“Johnson Controls has reinvested heavily both in new products and new capabilities to meet and exceed the ever-changing demands of our customers,” said Jeff Williams, president, global products, building technologies and solutions.

“In 2019, we opened a new 900,000-square-foot Rooftop Center of Excellence in Norman, Oklahoma, where we design and manufacture future-ready commercial rooftop units, and last month, we expanded our manufacturing facility in Hattiesburg, Mississippi, to meet growing demand for custom air-handling units. The investments we’re making today are driving the future of innovation.”

Magnetic-bearing technology attracted its share of attendees at the booth as well. Johnson Controls used the Expo as an opportunity to launch its expanded York YZ Magnetic Bearing Centrifugal Chiller platform, extending the range of this approach up to 2,020 tons. 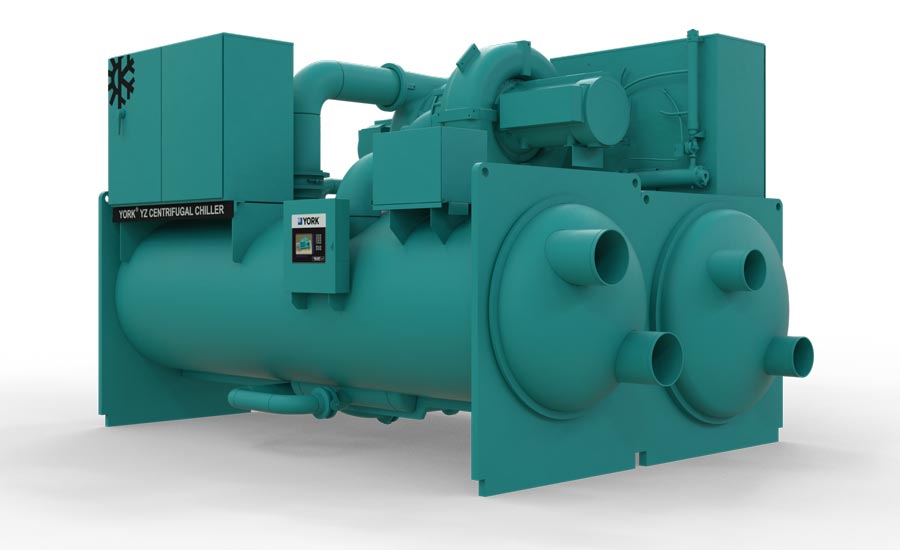 NOT TOO BIG TO EXPAND: The York YZ Magnetic Bearing Centrifugal Chiller platform covered even more ground as of the Expo, now offering models up to 2,020 tons in size. The unit’s low-GWP refrigerant is meant to set up both equipment and its owners for success in an increasingly challenging regulatory environment.

The YZ expansion is built around R-1233zd(E), using an inherent series counterflow design with patented heat exchangers, according to the manufacturer. The company points to the YZ’s recent introduction in the Middle East as evidence of its ability to perform in the most challenging environments. The unit’s alignment with such a low-GWP refrigerant is meant to set up the equipment and its owners to success in an increasingly challenging regulatory environment as well.

The company reports that the YZ advanced, aerodynamic design includes two single-stage compressors that are paired in a series counterflow arrangement, reducing the lift on each compressor to improve overall full-load and off-design performance. The dual compressor design allows for each compressor to run individually, it said, providing redundancy and improved off-design performance at lower loads. The design also increases turndown capabilities at low loads by continuing to provide cooling on one circuit in the unlikely event of a failure or an unplanned shutdown.

The manufacturer has moved to Release 10.1 of its Metasys BAS, including redesigned network engines to boost both drive system performance and cybersecurity. The Cyber Health Dashboard continues to provide the interface for critical user and system information.

Elsewhere in the BAS portfolio, the Facility Explorer BAS strengths include “world-class auto tagging capabilities” and is introducing a new supervisory controller as it marks its 15th anniversary.

Finally, the HX Pro app allows contractors, with homeowner permission, to quickly diagnose any issues remotely by sending diagnostics directly from the equipment for all customers under one account.

The app has been expanded to now work in conjunction with the company’s new HX™3 Communicating Zoning System. Described as a smart, high-efficiency home comfort solution, it works to respond efficiently to particular comfort needs within up to eight zones in a home. When paired with Johnson Controls premium variable capacity or two-stage communicating equipment, the system offers homeowners customized temperature control and reduced energy use. A proprietary design eliminates the need for bypass dampers, saving homeowners on installation costs and cutting installation time for contractors.

Johnson Controls product manager Jason Wilson explained that contractors can run the auto-setup feature on the system to detect the devices in each zone. Once complete, contractors have the option to configure the system via the Hx3 main controller, zone module, or the Hx3 Pro app via phone or tablet. QR code recognition for Wi-Fi set-up streamlines the process further.

One interesting aspect of setup is the airflow calculation process. Wilson described it as a thoughtful design created with the contractor in mind. Equipped with a quick reference guide and airflow calculator, the contractor can customize the system based on zone size and demand by selecting each zones’ airflow. Once configured, the system will run a 15-minute test without requiring any external sensors or probes. This can eliminate unnecessary and undesirably quick callbacks by delivering specific error messages such as “miswire - Zone 2” to smooth things out up front.

The YORKworks Customer Edition software aims to assist contractors tasked with selecting or configuring small tonnage chillers, air handling units, and packaged systems. It includes latest updates to YORKcalc so users can generate detailed reports based on use and real-world weather data. Part of the intent beyond YORKworks is to shift more knowledge to the owner and project team earlier on, in the name of a smoother process during estimate and bidding phases of a project.

Down the hall from the AHR Expo floor, Johnson Controls got things started on day one with an executive panel discussion about customer needs and digital trends.

Johnson Controls’ chairman and CEO George Oliver had recently attended the World Economic Forum in Davos. Oliver emphasized that sustainability targets and tactics have moved front and center at the influential summit synonymous with its Swiss location. 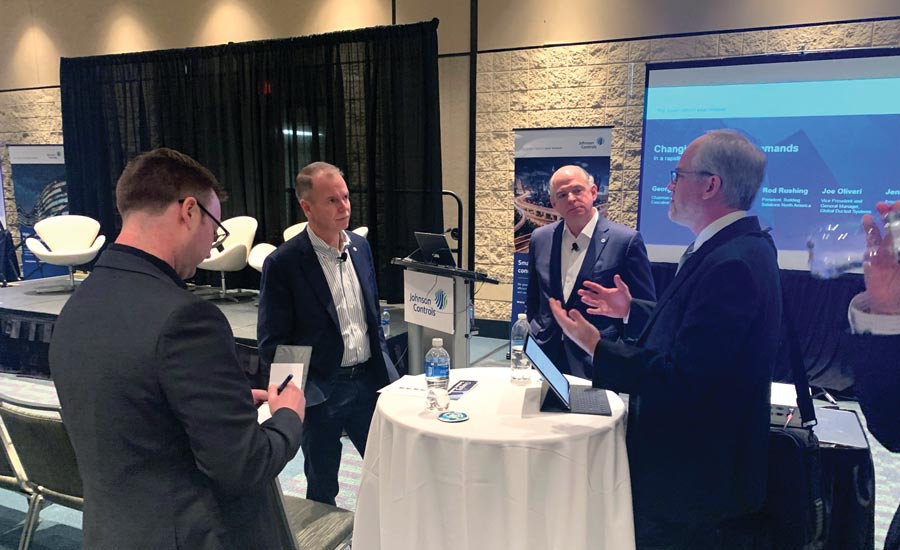 In just a year, he said, carbon reduction target discussions among those corporate and policy attendees have shifted from “big level thinking” to “action being taken” as hurdles for carbon-neutral deadlines in 2025 or 2030 come into focus. A number of pressures combine to quicken the pace: accountability to investors, general (if not unanimous) consensus on climate change reality, and an increasingly sophisticated customer base that expects performance and sustainability to coexist without compromising either.

“Customers today are very smart,” said Joe Oliveri, vice president and general manager, global ducted systems. That desire for environmental responsibility along with customized comfort manifests today, Oliver said, manifests itself “as smart technology, such as HVAC zoning capabilities, which can save homeowners’ up to 35 percent of a home’s energy.”

Outside of the home, mixed-use entertainment destinations — such as Johnson Controls’ hometown Milwaukee Bucks’ arena — represent a sector positioned to showcase leading-edge capabilities, said Ellis. He described them as “a good example of [savings] opportunity plus owners committed to creating leading environments” for both sustainability and comfort.

Another factor in play: Personal technology often advances first, setting a new normal and often leading people to ask where that convenience is in their work life. Ellis sees today’s business tech doing a better job than ever in closing that gap.

The result, Ellis said, will be technology that is “embedded so deeply, and that translates to better ease of use, more natural language.”

As for other effects on technicians, Oliver pointed to continued training improvements. Johnson Controls, he said, is cultivating a mix of online training with traditional settings, a blend he said is more efficient and more tailored to an individual’s developmental needs.