Job one: Getting the zoning upside to register with hesitant contractors

That’s how Dick Foster describes part of the problem he observes when it comes to greater use of (and expertise with) zoning HVAC in homes.

A well-known industry veteran, Foster is the president of ZoneFirst, manufacturer of zone dampers and control systems.

“Contractors need to zone as a business proposition,” Foster said. “Don’t turn down business because of fears about the work.”

He described a stigma when it comes to forced air systems and zoning. Now, however, variable-speed technology, including the ability to slow down the blower, allows contractors to get past this.

Foster said that less than four percent of the market is zoned. With so many residential possibilities untapped, that is why he says, “We are still in the pioneering mode in educating contractors.”

And unlike something like voice-activated home devices that receive substantial advertising directly to the consumer to raise interest, contractors need to equip themselves to be ambassadors when it comes to zoning.

“Consumers want it,” Foster said, “but they don’t know how to ask for it.”

Foster articulated something that other experts, including educational session presenters at this year’s Expo, also said: The duct system is the last remaining area of a home’s HVAC system where there is significant room for a more advanced and effective approach.

Air distribution may face a disadvantage because it isn’t readily visible. Zoning or its equivalent is so entrenched and accepted in other areas of household living, Foster pointed out, that people don’t even think about the norm as anything particularly fancy.

Light switches, sprinklers, and doors make up just part of the list of home devices and systems where consumers embrace some degree of zoning or scheduled use to avoid wasteful and more monolithic strategies for using resources.

Duct cleaning represents one area of HVAC where consumers have also become more educated about the possible impact on health, and thus more comfortable with paying for a service.

Foster explained that this trend can present a perfect opportunity to tie neatly into the work involved with integrating zoning into an existing home.

Having closed off the registers and returns, a tech can run a balloon on a string down a run from each register down to the basement. Tied to the string, the damper wire can then easily be pulled down to the basement as well. The tech would then connect those wires to the control panel, connect the damper at the register, and replace the floor grille.

The result for the contractor is an opportunity to help the homeowner acquire the benefits of both duct cleaning and new zoning capabilities, all while minimizing inconvenience.

At this year’s ZoneFirst booth at the AHR Expo, a couple of boards containing the components of a sample zoning system made it easy to visualize what goes into a zoning installation. Visitors could also pick up a handheld bypass sizing calculator that assists with round or square ducts. 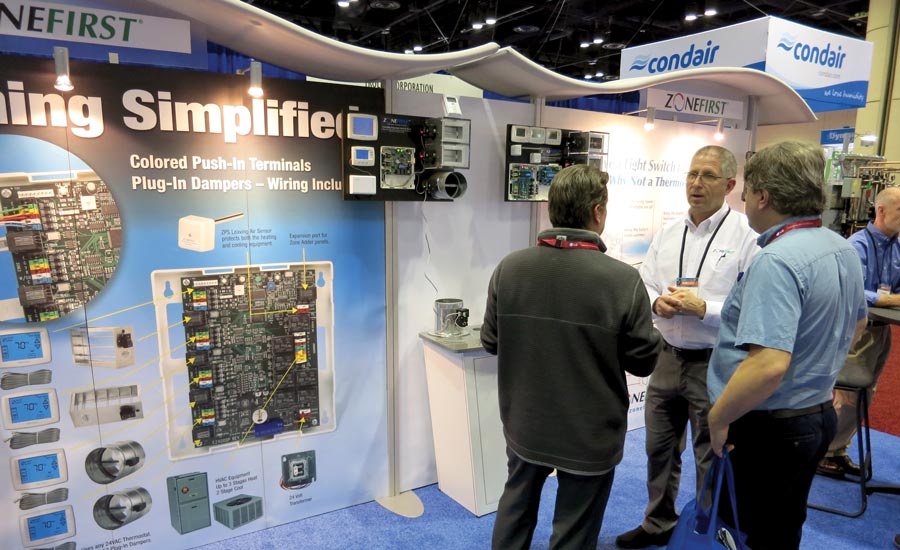 TALK IT OVER: The main job for ZoneFirst booth team was talking over zoning questions and experiences with contractors as they warm up to adding the option to their toolbox and revenue portfolio.

Foster referred contractors to the ZoneFirst website to check out its online energy savings calculator. Filling in a few data fields, contractors can easily walk homeowners through the potential costs and savings from a decision to pursue zoning, including length of payback and the annual return on investment.

That calculator is just one of the general zoning resources on the company’s site, which includes various tools and documents designed for homeowners, contractors, and/or builders.

That ties into the frequent dynamic at the booth itself. The Zonefirst team tended to do more in the way of conversation and fielding questions than product-intensive patter. The main challenge with zoning, per Foster, is not so much selling a particular item to contractors. For now, the primary challenge is persuading contractors to capitalize on zoning as a business opportunity for them and a comfort and savings solution for homeowners.