Compressors' Lives can Be in Danger From Moment of Installation

In the 20-plus years that Stephen Rardon, owner of Smart Home Comfort in Garner, North Carolina, has been in the HVAC industry, rarely has he found a compressor to be dead on arrival during an installation. In fact, he estimates that he has encountered less than five compressors that were faulty right out of the box. When a compressor does fail, he said, it’s usually either due to improper installation or lack of maintenance (see sidebar).

“The phrase is that compressors don’t die, they’re murdered, because 90-plus percent of the time, compressors are killed by some external component that causes them to fail,” he said. “The most important day of any compressor’s life is the day it’s installed, which is why commissioning the system is so important. Unfortunately, many technicians do not follow proper commissioning procedures, which can then lead to compressor failures.”

There are many new systems that have no chance of long-term success due to improper installation, said Martin Hoover, president of Empire Heating and Air Conditioning in Decatur, Georgia.

“The biggest reasons for compressor failure are moisture and contamination,” he said. “There are still many companies that don’t use a vacuum pump and many more that don’t own a micrometer. When I interview a candidate for a service technician position, I ask about proper evacuation. Many will say that they use a vacuum pump and always let it run at least 30 minutes to make sure all the moisture is out of the system. Those of us who use micrometers know that it doesn’t matter how long a pump runs. Many pumps won’t pull a decent vacuum — and those that will, can’t, if the seals on the gauges aren’t good. It’s very common. We replace seals and hoses several times a year, because that is what’s required to hold a 500-micron vacuum for 20 minutes. It’s the only way to know that the system is dehydrated.”

Rardon agreed that not pulling a proper vacuum during installation is a big problem that is usually caused by poor commissioning procedures. 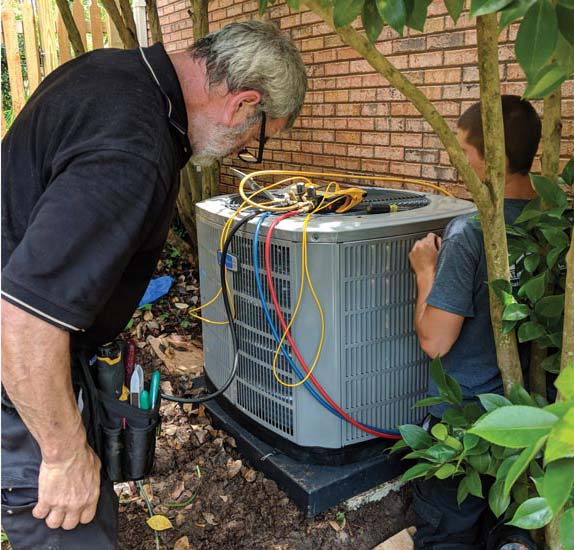 CLEAN AND CHECK: The planned maintenance program at Empire Heating and Air Conditioning includes biannual inspections, where technicians check that coils are clean and airflow is correct.

“In my experience, the most common compressor issue is acid, and acid is typically caused by not purging nitrogen during the installation of the refrigerant piping and not pulling a proper vacuum to make sure that the moisture and air are out of the lines,” he said. “Nine times out of 10, it’s a matter of poor practice installing the equipment rather than anything else.”

Poor practices also include not replacing the filter drier after a system has experienced a compressor burnout. Hoover cites a perfect example he encountered that involved a 20-year-old house with a five-year-old unit that was on its second compressor but still had the 10-year-old filter-drier that was left in the line set from when the original compressor failed.

“If an existing line set is used during the installation, it is important to check for old filter driers and sludge and then purge the lines,” he said. “All new installs must use a micrometer to verify there are no leaks or moisture left in the system, and airflow must be verified to confirm proper charge and performance. Getting it right from the start is critical for a good long unit life.”

“A compressor’s role within the system is to pump vapor, but it does so against the pressure established by the system,” he said. “The system’s role is to absorb heat in one heat exchanger (evaporator) and reject heat in another heat exchanger (condenser). Anything that impedes a given heat exchanger’s ability to absorb or reject heat will have an impact upon the pressure at which that heat exchanger operates. Compressors are most efficient at high evaporator and low condensing conditions, so any maintenance regimen should ensure clean coils and unimpeded airflow. Proper system charge is also required for optimum system operation.”

Brad Hess, air conditioning application engineering manager at Emerson Commercial and Residential Solutions, agreed that regular maintenance items should include coil cleaning (both indoor and outdoor), as well as checking airflow to ensure that there is no collapsed ductwork or closed/blocked registers. Any restrictions in the ductwork will cause the compressor to work harder, which could lead to premature failures.

“Maintenance should also include inspecting electrical components such as contactors and capacitors, and taking the ‘vital signs’ of the compressor and system (e.g., pressures, temperatures, superheat, subcooling) to ensure proper refrigerant charge,” he said.

Ideally, maintenance should take place every six months — usually once each in the cooling and heating seasons — provided that the indoor air filter is being changed every one to three months, noted Hess. He added that using a checklist can help service technicians ensure that all maintenance items are being properly addressed, monitored, and documented for future use.

Indeed, Verlon Wulf, president of Carolina Cool Inc. in Surfside Beach, South Carolina, uses a 28-point inspection form that his service technicians must fill out during all preventive maintenance service. Heat pumps are the system of choice in his area, so the checklist is customized for that type of equipment.

“Twelve of the points require actual readings to be taken from the system, so we can develop a history of system performance,” he said. “In addition, the checklist calls for tightening all electrical connections and verifying cleanliness of coils. Several years ago, we added magnehelic gauges to our trucks, and the preventive maintenance checklist now requires measuring static pressure. Static pressure is critical to the performance of new higher-efficiency systems, and this ensures that the design is correct. Plus, there have been instances where air handler insulation has come off and fallen against the coil, resulting in high static pressure.”

Because Carolina Cool services equipment in the low country of South Carolina — which includes coastal communities — humidity is extreme, and the salt air can corrode a system rather quickly. For these reasons, Wulf said customers are often interested in coated coals, and the company waxes its customers’ systems once a year.

At Empire Heating and Air Conditioning, the planned maintenance program calls for biannual inspections, which include verifying system airflow and checking coils for cleanliness. 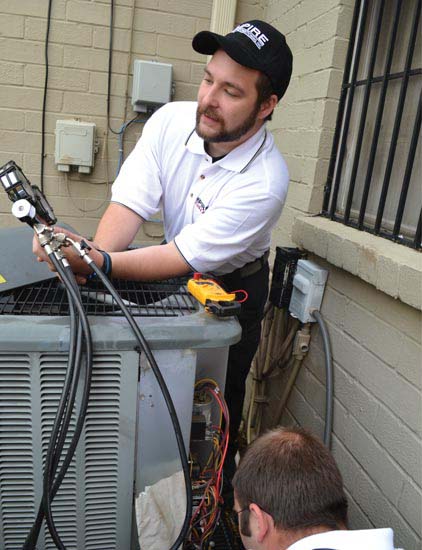 “We actually connect gauges at least once a year to check subcooling and superheat, and we also check amperages of motors and voltage drop across the contactor,” said Hoover. “I’ve seen a growing trend to not connect gauges unless a problem is encountered, and we are researching that. We are also considering adding discharge line temperature to our standard testing, which is currently in our diagnostic protocol.”

As noted earlier, systems that are not properly installed can result in the formation of acid, which can eat away at motor windings. For this reason, technicians may want to gauge the health of the compressor by conducting resistance tests on the windings while performing preventive maintenance, said Rardon.

“Only do this if you’re going to use an accurate megohmmeter, which tests the insulation strength on the windings,” he said. “Don’t use the testers where you push a button and you get a range of lights, because these types of testers are fairly inaccurate.” 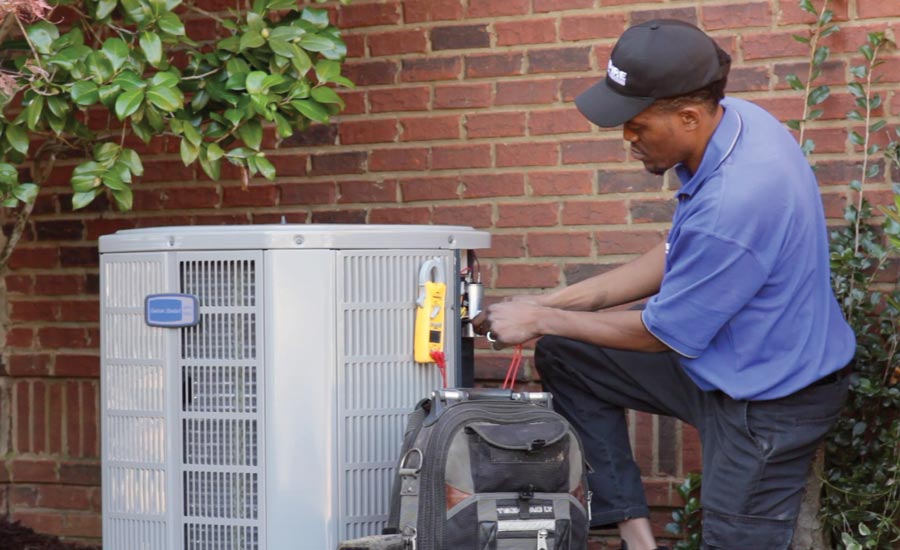 LIVE LONG AND PROSPER: By adhering to proper installation procedures and regular maintenance guidelines, contractors can help ensure that their customers’ compressors have a long and healthy lifespan.

In addition, Rardon encourages technicians to regularly clean out the bottom of the condensing units they are servicing.

“I think a lot of companies overlook this,” he said. “Often there is a lot of debris that settles down in the bottom of the equipment where the compressor sits. If it is never cleaned out, it can cause external degradation of the metal, potentially resulting in leakage. I know a few technicians who clean that thing until it shines like it’s new, but more often than not, cleaning the bottom of the unit is ignored.”

By adhering to proper installation procedures and regular maintenance guidelines, contractors can help ensure that their customers’ compressors have a long and healthy lifespan.

Three Problems That Can Lead to Compressor Failure

Failed compressors have always been a problem in the industry, said Verlon Wulf, president of Carolina Cool Inc., in Surfside Beach, South Carolina, but when the discussion involves the frequency of failed compressors, that discussion should also include the longevity of systems in general.

“I’m sure we all remember a time when a standard HVAC system would last anywhere from 15 to 25 years,” he said. “That sort of longevity has become virtually non-existent, with systems typically being considered for change out at the 10-year mark. Many tract homes have systems that barely last past the five-year mark.”

So, what changed? Wulf noted that when the Environmental Protection Agency (EPA) decided to phase out ozone-depleting R-22, the alternative was to switch to refrigerants such as R-410A, which significantly increased internal pressures. That, he contends, is the first problem.

“During virtually this same period, the Department of Energy (DOE) determined that it would be good to continually increase the energy efficiency of HVAC equipment, first from 10 SEER to 13, and eventually to 14,” he said. “Manufacturers themselves started pushing the limit with systems that reach 18 to 20 SEER efficiencies. In order to increase those efficiencies, they increased the size of the coils, decreased the thickness of the walls of the tubing, and sometimes made coils with cheaper alloys. Hence, problem number two: thinner walled coils with more bends, which can result in more leaks.”

And finally, during this same period, manufacturers moved much of their production out of the country and quality suffered, said Wulf.

“During one three-month summer, we replaced 46 evaporator coils in a specific manufacturer’s systems that were less than a year old,” he said. “Most recently, we did a $13,000 job replacing a condenser coil in a major manufacturer’s 15-ton unit that is less than three years old. That’s problem number three: poor quality of coils. You combine these three issues, and you have a formula for early compressor failure.”