Ductless systems are all grown up

Though something of a misnomer, VRF and mini split heat pumps are commonly referred to as “ductless units.” These systems are much more versatile today than they were just five years ago.

It’s hard to find a good name for a single- or multi-zone heat pump product line that’s inverter driven with a variable speed compressor. The term “mini split” doesn’t really fit, because over the past 10 years, they’ve grown from 9 Kbtuh units all the way up to 48 Kbtuh, allowing them to compete with larger conventional equipment. The term “ductless” is incorrect as well, because there are now a significant selection of ducted models available.

This leaves an identity crisis in an industry that’s typically not familiar with these systems. The name “mini split” is probably most fitting, because no matter the capacity, the compact size of the equipment is always evident.

Another development over the last five years, roughly speaking, is the offering of mini split system condensing units that have heating operation and performance capabilities at negative outdoor temperatures (down to minus 15°F). This initiated a quantum leap in applications throughout northern climates.

Then came the shift to more substantial applications. Around 2006, manufacturers began applying inverter driven, multi-speed compressor technology to larger system capacities with more indoor zones and greater control. This led to the birth of variable refrigerant flow (VRF) systems in the North American market. For the first time, a significant number of separate zones could be applied to a building, responding to individual thermal needs of each zone (or occupant) but also limiting the heating and cooling capacity to actually that required by the building. This allowed the building owner to enjoy substantial energy savings over single speed/single capacity types of equipment. The energy savings have even exceeded other types of variable-capacity HVAC systems with complex building automation systems.

The variety of indoor units has helped enormously, too. The increase in overall capacity and number of zones for a given system; heating operation at low outdoor temperatures; and a plethora of ducted and ductless choices for indoor units have created a significant increase in residential and commercial building applications.

Today, residential and commercial applicability for these technologies is nearly unlimited. This is particularly true of building renovations or historical structures that had non-existent, very limited, or antiquated HVAC systems.

Mini split and VRF systems are finding significant traction in structures where the heat loss or gain of the building varies widely, like hotels, apartment/condo buildings, educational facilities, and churches. These systems are an excellent choice where there’s an absence of existing ductwork or the existing duct size is inadequate.

The list of applications not well suited for VRF is quickly shrinking. If a sports coliseum or convention hall were the application, VRF probably wouldn’t be the best choice due to the sheer volume of fresh air required. However, the surrounding concessions booths, shops, or offices would be ideal candidates for VRF. More than likely, a hybrid mix of systems would provide a best-case scenario.

The VRF product family is broken into two system groups: heat pump and heat recovery. While appearing similar in overall components, these are very different systems in regard to what they provide to building occupants.

A VRF heat pump system (meaning one to three outdoor units tied into a single refrigeration circuit) provides either heating or cooling to all the connected zones. This means that all indoor units connected to that system will be in the same operational mode — heating or cooling. This works well for building applications where the need to change modes doesn’t occur very quickly, or the selection of temperature (requiring a mode change) is not an individual occupant’s choice

In contrast, a heat recovery VRF system is capable of providing simultaneous heating and cooling to its various zones (again from one to three outdoor units on a single refrigeration circuit), and does so economically. Zones within the system can operate in either mode. A heat recovery system “recovers” BTUs that occur within the occupied zones that need cooling capacity and moves those BTUs to zones that are calling for heat, thus saving energy.

Heat recovery systems work extremely well where the indoor space temperature rests with the choice of the occupant, where loads within a building are different from zone to zone, or where loads can change quickly, due to solar gain, occupancy, etc. Examples of these are multi-family residential units, hotel rooms, and assisted living facilities. The choice of using heat pump or heat recovery is based on the expectation that the end user will choose their heating and cooling environment.

One of the most important commercial HVAC design considerations is providing mechanical code-required fresh air ventilation for the building. In most unitary applications, fresh air (often called outside air) can be 15 to 30 percent of the heating and cooling load.

This load is quite frequently drawn right into the return air chamber or duct of a system. This method has been utilized for decades in the HVAC industry, mostly because it offers the lowest first cost. But as energy costs continue to increase, heat recovery ventilator (HRV) and energy recovery ventilator (ERV) technology have gained popularity.

An HRV exchanges the sensible load only between the outside air and the “stale” or exhaust air streams. An ERV exchanges both sensible and latent (moisture) loads between the two airstreams. An ERV will be a more effective choice in climates with a higher moisture content. The return or “stale” building air is used to temper incoming fresh air, which reduces the load burden placed on the heating and cooling system. The higher the HRV or ERV core efficiency, the closer the fresh air gets to a room-neutral condition, and the lower the load on the primary HVAC equipment.

As a result, VRF manufacturers have been tasked with making the integration of HRV/ERV systems as seamless as possible. This includes simple communication between controls of each system and providing effective ways to deliver fresh air.

With most VRF systems today, fresh air can be provided via a ducted system, or it can be introduced directly to a ductless indoor unit if that unit has a provision (fresh air kit) for connection to a fresh air duct. At Fujitsu, the premium fresh air solution includes the use of a Ventacity Systems high-efficiency HRV or ERV system. This system, along with its proprietary control system, communicates with the VRF systems to provide fresh air to the zones equipped with fresh air kits or via ductwork throughout the building.

A good example of integrating a high-efficiency fresh air enthalpy system with VRF technology can be seen in Tarrytown, New York, where a mixed-use office building recently underwent an HVAC system retrofit. The 71,000-square-foot facility had been served by four 60-ton, multi-zone, natural gas-fired rooftop units for nearly 50 years. 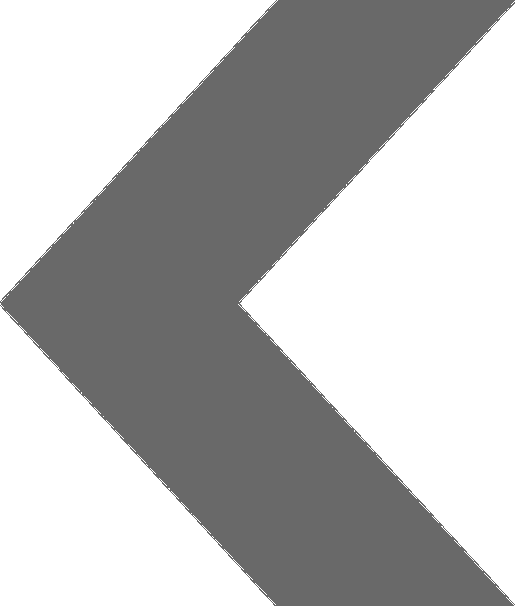 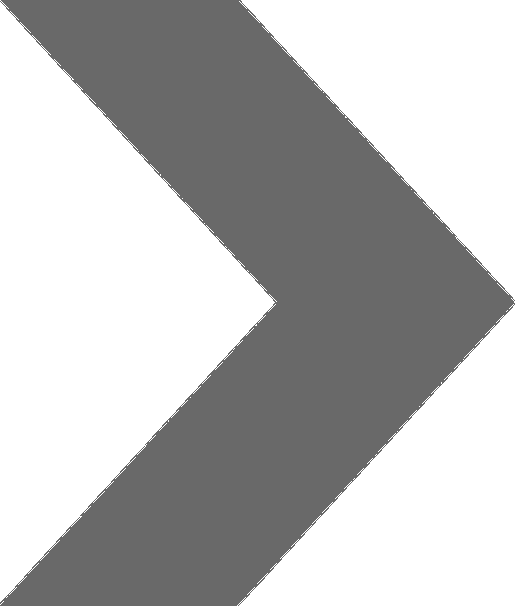 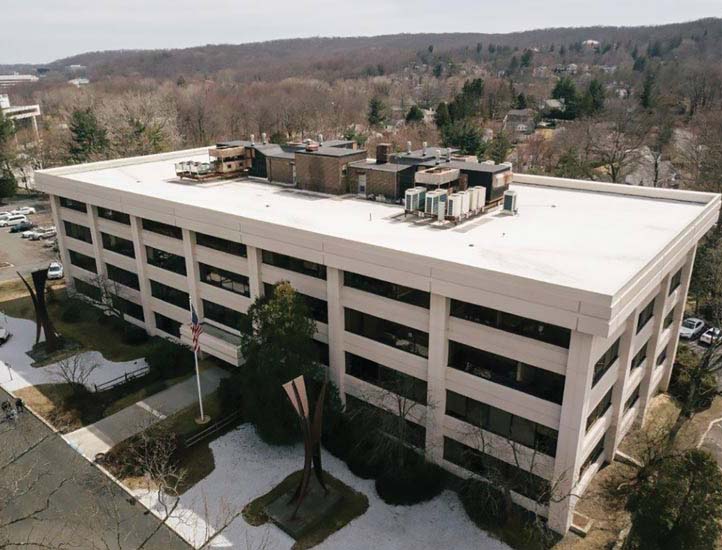 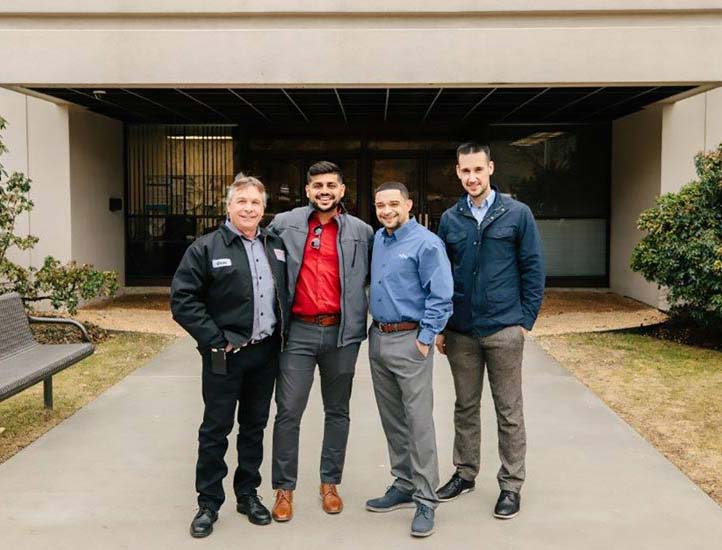 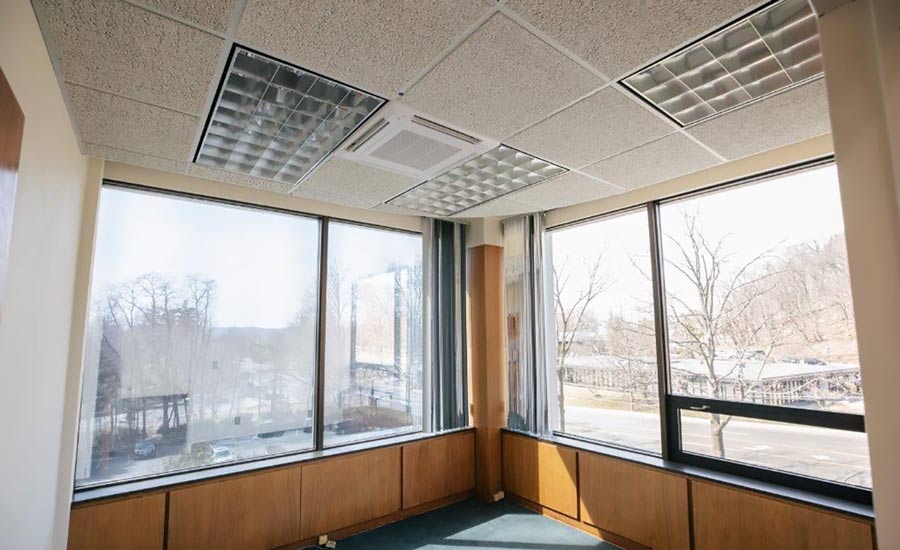 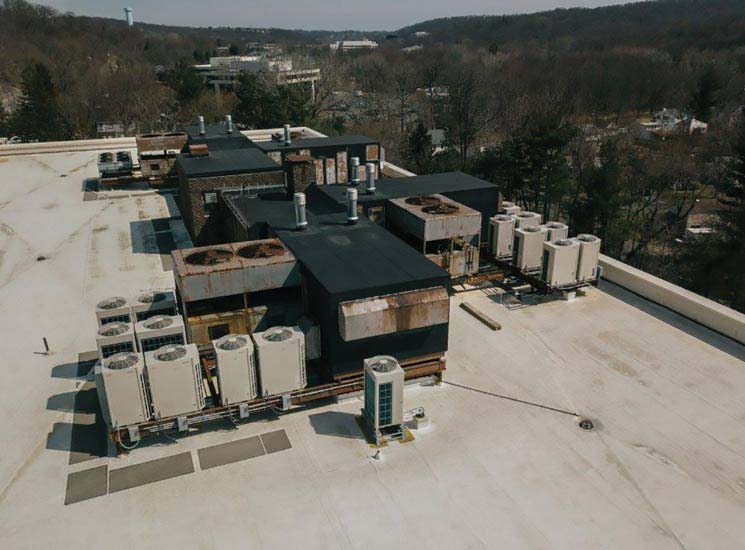 IN TRANSITION: The complete VRF systems installed in phase one can be seen on the right, with the original system still in place on the left, during the Tarrytown office building’s HVAC system retrofit. 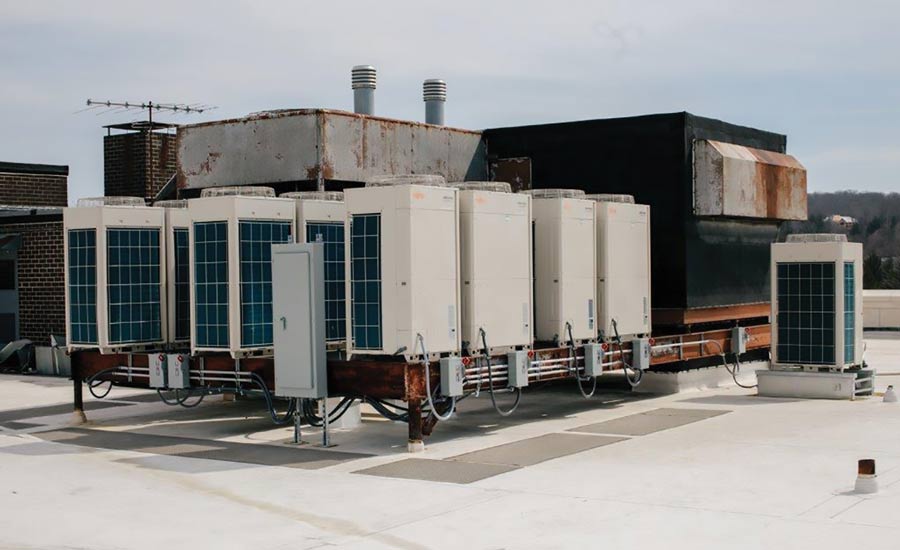 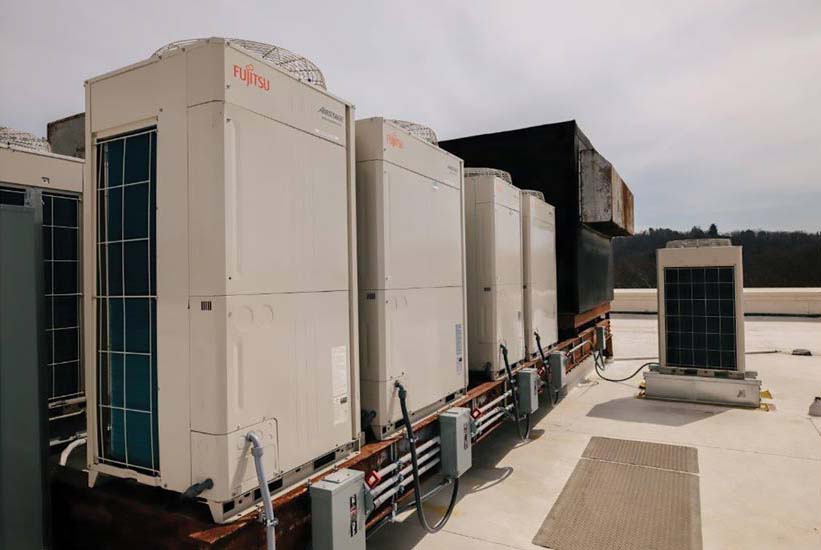 READY FOR DUTY: Several Fujitsu Airstage systems are installed on the rooftop of a mixed-use office building in Tarrytown, New York. 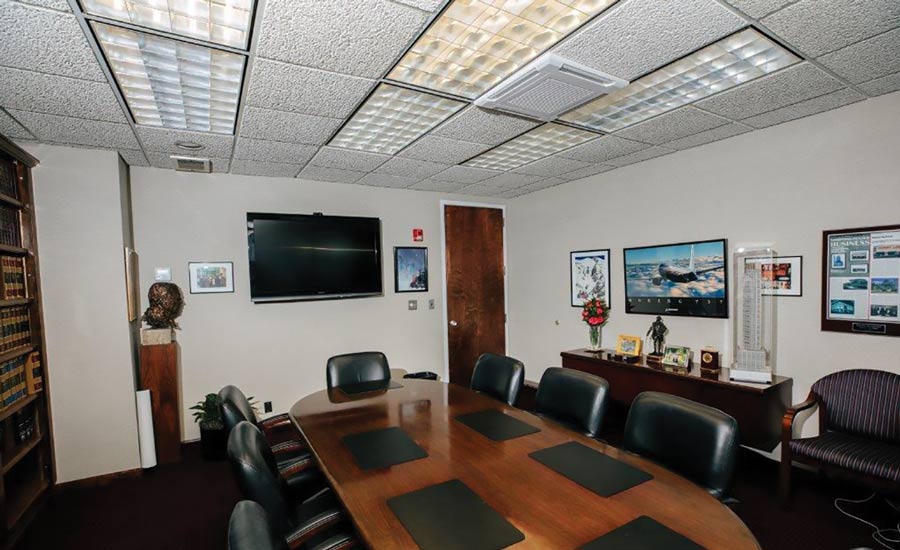 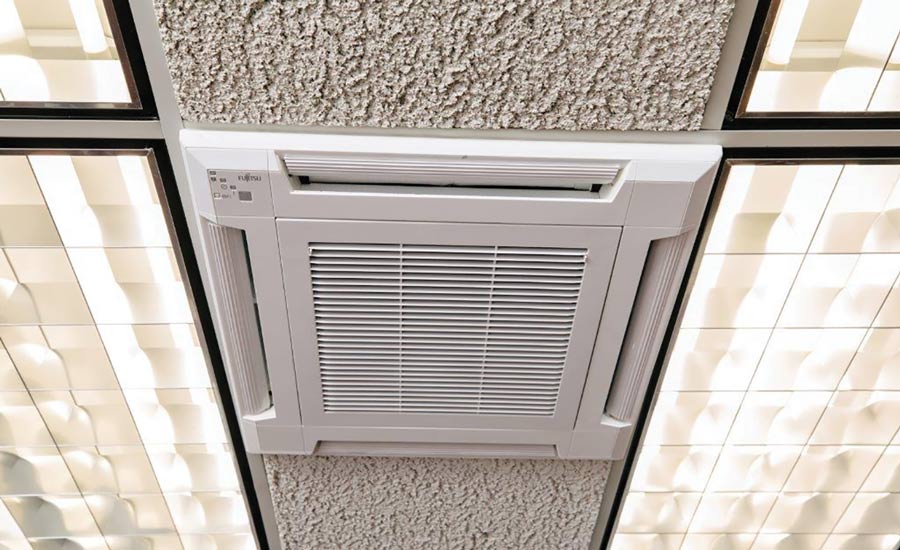 THINKING UP: Meeting rooms in the 71,000-square-foot building were zoned individually with ceiling cassette units.

Blend Air Mechanical Corp. began installing a heat recovery VRF system in early 2019. Before the retrofit, a third-party consulting engineer was hired to perform an energy analysis of the building to compare the performance of the existing system with that of both new, code-minimum rooftop units and the VRF system. It was estimated that the Fujitsu Airstage VRF system, paired with a Ventacity Systems ERV system, would provide annual electricity and natural gas savings of 224,000 kWh and 38,800 therms, respectively. This yields a $62,000 annual cost reduction. The VRF/ERV system was found to outperform the new code minimum rooftop system by 181,000 kWh and 29,000 therms, or about $46,000 annually.

The HVAC system retrofit was broken into two phases, each covering one identical half of the building. So far, 16 of the 32 total VRF condensing units have been installed. The first ERV system was installed July of 2019.

“The ERV system can operate based on CO2 levels within the occupied space, but we’ve chosen to run the system at constant volume airflow,” said Glenn Grossman, president of Blend Air. “Modifications were made to the existing ductwork to accommodate the ERV systems. We’ve used one existing duct for exhaust and one as a fresh air duct. The system draws exhaust air from common areas, while fresh air enters via return air plenums attached to all air the handlers.

“We’ve learned that the energy expense for the months of April and May were $23,000 below the figures for the same time period in 2018,” said Umair Surani, sales engineer at Fujitsu. “That only accounts for half of the building, and does not take the impact of the ERV system into account. The figures should be even more impressive once the energy savings from the ERV system have been recorded. The savings could be an additional 25 percent or more.”

“Rather than have an oversized system, VRF systems allow that zone to be sized to its peak capacity, which may actually be — for example — 120 percent of the outdoor unit, so that the excess capacity not being used by other zones can be used by the temporarily peaking zone.”

VRF systems provide yet another advantage for engineers, installers, and end users in that connected capacity of the indoor units may be sized above the total capacity of the outdoor units. The outdoor units are the source of all heating and cooling BTUs needed for the building, and must be sized to meet those needs at the outdoor design temperature. This capacity ratio is 100 percent. However, some internal zones may peak at various times due to variability in occupancy or internal equipment. These increases are typically not when the peak load of the system is occurring and are usually cooling related.

Rather than have an oversized system, VRF systems allow that zone to be sized to its peak capacity, which may actually be — for example — 120 percent of the outdoor unit, so that the excess capacity not being used by other zones can be used by the temporarily peaking zone.

Mini split and VRF technology has grown and evolved rapidly over the past few years and can now be considered a viable possibility for most residential and commercial HVAC applications due to its flexibility, comfort, and efficiency. It’s an option now where it may not have been a decade ago.