How HVAC Can Help Prevent the Spread of Contagious Diseases

A sick person sneezes. Even in a well-ventilated room, airborne droplets containing infectious agents can remain viable for as long as six minutes.

One infectious disease that’s been in the headlines this year is measles, which has made a comeback since being declared eliminated in the U.S. in 2000. In the first half of 2019 (Jan. 1 to July 11), 1,123 individual cases of measles were confirmed in 28 states across America. Per the Center for Disease Control (CDC), it’s the largest number of cases reported in the U.S. since 1992.

Measles is a highly contagious virus, and it lives in the mucus of the person who’s infected. It spreads through coughing and sneezing. When someone coughs or sneezes, the virus can linger for two hours.

“If other people breathe the contaminated air or touch the infected surface, then touch their eyes, noses, or mouths, they can become infected,” wrote the American Red Cross. “Measles is so contagious that if one person has it, 90 percent of the people close to that person who are not immune will also become infected.”

Unless precautions are taken, the virus — or any pathogen, really — can be distributed throughout a building by the HVAC system, or even recirculated through the ductwork. One way to reduce that risk is through the use of technology that employs UV-C (short-wavelength ultraviolet) light.

Ashish Mathur is vice president of innovation and technology at UVDI, a technology supplier to Johnson Controls Inc.

“There is peer-reviewed literature giving evidence of UV-C effectiveness in reducing measles transmission,” he said. “UV-C is typically combined with conventional air quality control methods, including dilution, ventilation, and particulate filtration, to optimize cost, energy use, and performance.”

Ultraviolet germicidal irradiation, or UVGI, is a method of disinfection using UV-C germicidal light at the 254-nanometer (nm) frequency to kill or deactivate microorganisms. Introduced in the late 1800s, it first came onto the scene in 1903, when Danish scientist Niels Finsen received a Nobel Prize for medicine for using UV-C light to combat tuberculosis. 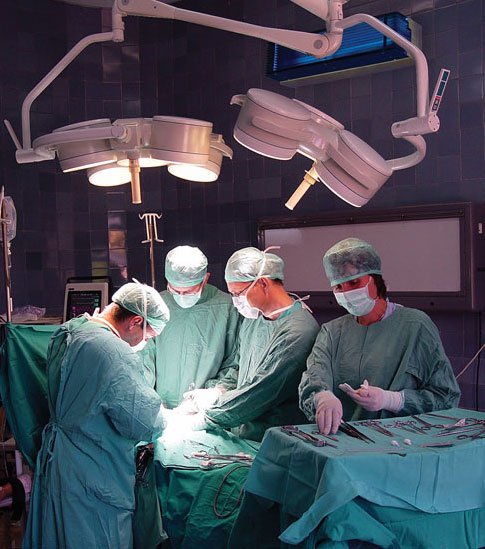 SANITARY SPACE: UV technology, like the glowing blue upper-air fixture on the wall in this surgery room, can reduce the risk of hospital-acquired infections.

UVGI was used for water disinfection in the early 1900s, and for both water and airstream disinfection in the post-WWII era. However, it fell out of favor in the 1960s as new antibiotics and cleaning agents came to market and mechanical ventilation in buildings improved. In the 1990s, demand for the germicidal technology returned, following a resurgence of antibiotic-resistant germs.

“The UV-C 254-nm germicidal wavelength carries enough ionizing energy to permanently alter cell DNA — including superbugs and other antibiotic-resistant germs — ultimately killing the cell and making replication impossible,” said Daniel Jones, president, UV Resources. “In other words, no known microorganisms are completely resistant to the physical effects of the UV-C frequency, and microbes cannot develop a ‘resistance’ to this energy form.”

In 2017, a randomized trial led by Duke Health found that UV-C energy cut transmission of four superbugs by 30 percent. Similar results were demonstrated in a 2013 CDC-funded study that found UVGI reduced the total number of colony-forming units of any pathogen in a hospital room by 91 percent.

“ASHRAE, too, has recognized that the UV-C wavelength inactivates virtually all microorganisms living on HVACR surfaces with a kill ratio of 90 percent or higher, depending on UV-C intensity and length of exposure,” Jones said.

That inclusion of the technology in the ASHRAE handbook, in 2008, was what made UV the de facto technology, in conjunction with filtration, for improved IAQ and equipment efficiency, added Aaron Engel, vice president of business development, Fresh-Aire UV.

As of 2000, approximately 60 percent of all UVGI air disinfection systems were installed in health care facilities: 41 percent in hospitals and 19 percent in clinics.

“However, over the past 12 to 15 years, it has been realized that the benefits of UV-C (energy savings, reduced maintenance, and improved IAQ) are not solely reserved for the health care setting,” said Jones. 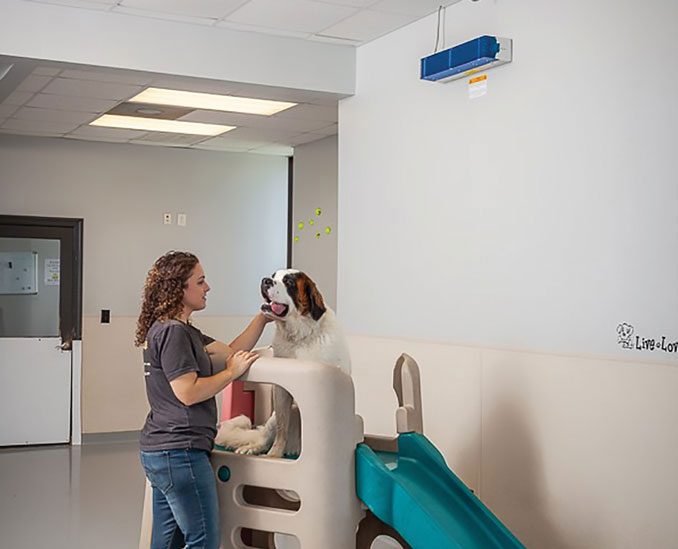 That, coupled with the fact that UV-C can kill virtually any microbe including viruses, has resulted in the significant growth of UVGI systems in residential, commercial, and industrial applications. Common applications include schools, office buildings, airports, senior living, dental offices, greenhouses, and veterinarian offices: high-traffic spaces where airborne microorganisms are prevalent and IAQ is becoming more of a concern. 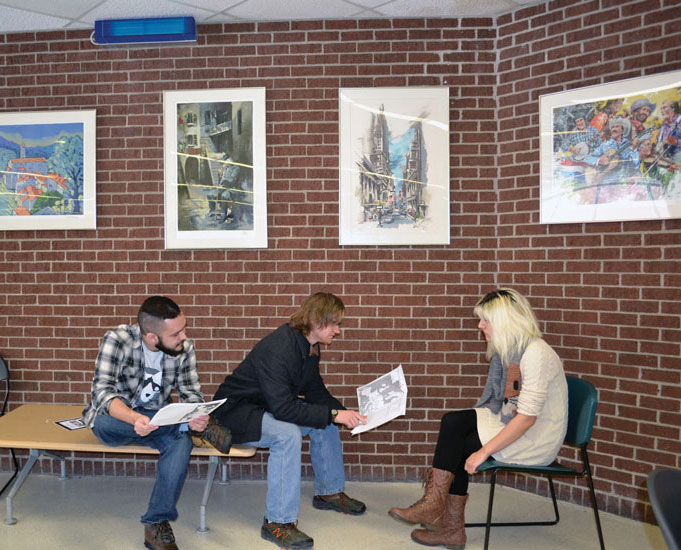 PUBLIC SAFETY: A UV system is installed on a college campus, a high-traffic area where airborne microorganisms are prevalent.

One example is Schenectady County Community College, where upper air fixtures were deployed in multiple locations including the daycare center, cafeteria, café, and the student forum and lounge, where large numbers of students congregate. It’s also used for disinfecting municipal drinking water and wastewater treatment, as a greener alternative to chlorine disinfection.

Coil-irradiation and airstream disinfection systems are installed within HVAC equipment and help maintain a clean evaporator coil, drain pan, and surfaces, preventing mold and other contamination from being introduced into the airstream via the HVAC equipment.

“The coil and surrounding area are often the source of microbial contamination,” said Engel. “Maintaining a clean AHU [air-handling unit] will ultimately reduce what is introduced into the air.”

As well as improving air quality by continually ensuring the airstream is clean when it leaves the equipment, coil-mounted systems can potentially save energy. 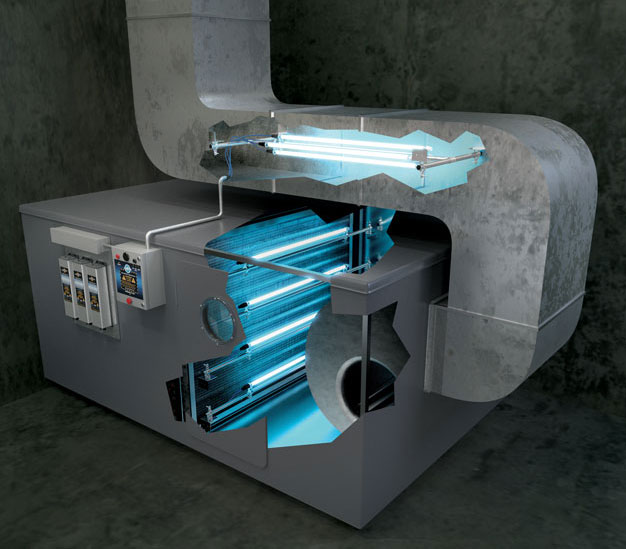 FROM THE INSIDE OUT: UV lights can be placed inside an AHU to disinfect the airstream.

“The insulating nature of biofilm can … increase static pressure and reduce heat transfer across the coil fins,” Engel said. “The microbial coating causes the system to work harder, and resulting biological blow-off is then distributed back into the facility.”

Keeping cooling coils in AHUs free of biofilm buildup can reduce pressure drop across the coils and improve the efficiency of the heat exchanger.

“Commercial IAQ problems vary from application to application, but they often stem from a poorly maintained HVAC system, whose organic-rich environment is an ideal breeding ground for microbial buildup on surfaces and in the airstreams they condition,” Jones said. “Thus, this is one of the first areas that a contractor should check when isolating an IAQ problem.”

Upper-air systems are installed in occupied spaces to control bio-aerosols in the upper part of an occupied room.

“In-duct UVC systems distribute UV energy uniformly in all directions throughout the length of the UV duct or AHU [in which they are installed] to deliver the appropriate UV dose to air moving through the irradiated zone,” explained Mathur.

Typically, upper-room fixtures are wall mounted at a height of 7 feet or above and employ louvers to direct the UV-C energy emitted from the lamp upward and outward to create an intense zone of the UV-C wavelength in the upper-air while preventing dosage in the lower (occupied) portion of the room or area, Jones said.

“Operating 24 hours a day, upper-air/room systems can use the natural convection of airflow or mechanically directed airflow in a room to bring potentially infectious microbes through the intense germicidal energy produced by the UV-C fixture,” he said. “Microbes exposed to UV-C can be ‘killed’ in under a second, and these units have been shown to be effective against airborne viruses and bacteria, including chickenpox, measles, mumps, varicella, TB, and cold viruses.”

“Viruses and certain bacteria are so small that they pass through even the highest-efficiency filter like sand through a tennis racket,” he pointed out. “UV-C disinfection is the perfect complement to conventional filtration. The filter removes the particulates from the air, and the UV-C energy deactivates the microorganisms that pass through the filter that would have otherwise been distributed through the HVAC system.”

“Installing UV systems in the air handler section will achieve immediate results by disinfecting coil and other surfaces within the AHU (typically within an hour) but will require time for the UV-C light to penetrate deep into the coil, breaking down the biofilm,” Engel said.

How long it will take for the UV-C light to penetrate through the coil depends on how fouled the coil may be.

“Best practices would be to clean the coil first or install the UV system on a new unit,” Engel continued. “If that is not an option, it may take up to a few weeks to months for the UV-C light to break down the biocontaminants within the evaporator coil itself.”

KEEPING THE LIGHTS ON

“Because of the nature of UV installations, very little maintenance is required beyond a one- to two-year lamp replacement schedule,” said Engel. “Periodic monitoring of the UV-C lamps should be done to make sure the UV lamps are not fouled and that all wiring and mounting is secure.”

Regardless of their make or model, all UV-C lamps will lose output over time, Jones said.

“It’s also been established that this, in most cases, will not be evident from visual inspection, but the resulting effects on performance could negatively impact energy efficiency and IAQ,” he said. “Quality lamps will still emit at least 80 percent of their original UV-C germicidal output rating at the end of one year, but it will be a matter of time before they, too, lose effectiveness.”

Typically, high-output lamps can be replaced at less than 3 cents per cfm.

By 2020, the total market for UV systems is estimated to be worth nearly $3 billion, Jones said.

“The global growth rate for microbial ultraviolet disinfection equipment has been increasing annually as more facility managers and building engineers recognize its energy savings and decontamination value,” he said.

Part of that growth has to do with UV spreading from commercial uses to residential.