This website requires certain cookies to work and uses other cookies to help you have the best experience. By visiting this website, certain cookies have already been set, which you may delete and block. By closing this message or continuing to use our site, you agree to the use of cookies. Visit our updated privacy and cookie policy to learn more.
Home » Geothermal Industry Addresses Challenges and Opportunities
HVAC Residential MarketHVAC Light Commercial MarketResidential Geothermal Heat Pumps

The U.S. Department of Energy (DOE) recently released a report titled “GeoVision: Harnessing the Heat Beneath Our Feet,” which concludes that with technology improvements, geothermal electricity generation could increase more than 26-fold from today — reaching 60 gigawatts (GW) of installed capacity in the U.S. by 2050. Furthermore, the report states that the market potential for geothermal heat pumps (GHPs) is more than 14 times larger than existing capacity, which is the equivalent of supplying heating and cooling solutions to 28 million households.

While this outlook is very rosy, the report also listed a number of barriers that may prevent rapid consumer adoption of GHPs, including slow development of new technologies to improve GHP system cost and performance, high initial upfront costs, poor public awareness and confidence, and inadequate financing options, to name just a few. Manufacturers continue to remain enthusiastic about GHPs, but they agree that the geothermal industry has its work cut out for it.

Of all the barriers listed above, Steve Smith, president and CEO of Enertech Global LLC, believes consumer awareness is the No. 1 challenge today, as most homeowners don’t even know that GHPs are an option when building their homes or updating an old system.

“I fully believe that if every homeowner today had an unbiased education on the pros and cons of their various HVAC options, the geothermal industry would be singing a significantly different tune,” he said. “Out of the 8,760 hours in a year, the average homeowner likely spends over 4,000 of them in the walls of their home. Most people don’t really want to think of their heating and cooling system, but if they considered the safety, efficiency, comfort, and durability that a geothermal system brings to those 4,000 hours, they’d be far more likely to choose a geothermal heat pump.” 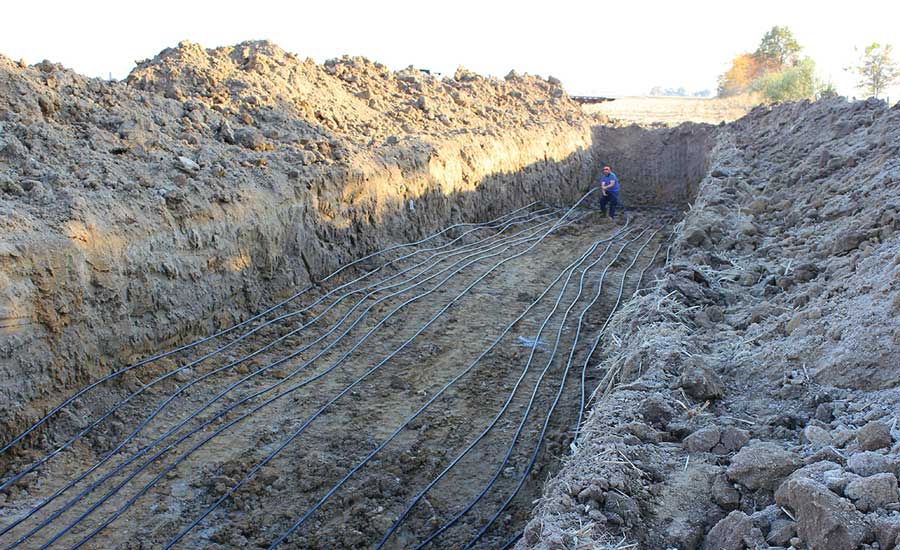 PERFORMANCE IMPROVEMENTS: The loop is a GHP’s main differentiator from a traditional system, so every little optimization can result in vast improvements in the performance of the system itself. PHOTO COURTESY OF ENERTECH

“At Bosch, we are trying to increase public awareness through targeted marketing and advancements in our geothermal product portfolio,” he said. “With marketing campaigns and maybe higher government tax incentives, I believe we would see a larger shift toward geothermal. Furthermore, I think we will continue to see the geothermal market grow faster with the megatrend of decarbonization and the electrification of the American HVAC market.”

While many may still not be aware of the benefits of geothermal technology, there have been advances in consumer awareness, said Tim Litton, director of marketing communications at WaterFurnace.

“In addition to utilities returning to promoting geothermal, associations like the Geothermal Exchange Organization have been looking at how to address consumer awareness from an industry perspective,” he said. “Meanwhile, brands like WaterFurnace have been steadily increasing our investment into advertising (both brand and co-op) along with offering our dealers new tools to make advertising easy. The industry has a long way to go, but we’re recognizing that raising consumer awareness is imperative in order to get there.” 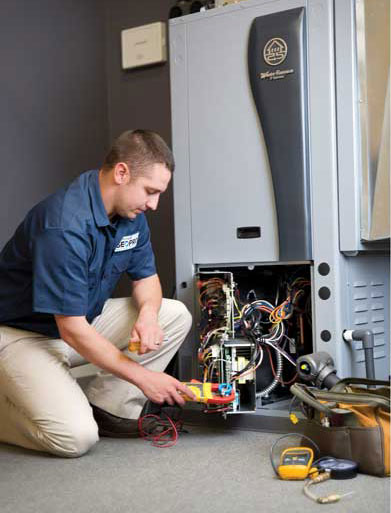 Douglas Dougherty, president and CEO of the Geothermal Exchange Organization, agrees that while lack of consumer awareness has always been a barrier to the adoption of GHPs, another barrier is the onerous ground heat exchange permit processes, as well as prohibitions on fuel switching under energy efficiency programs, and flawed state test analyses.

“I see greater adoption led in large part by states adopting building decarbonization policies and the greater embracement of beneficial electrification programs across the country,” he said. “Tax credits are still a huge factor in consumer adoption.”

Another barrier to the widespread adoption of GHP technology is the high initial cost of the installation and equipment. The industry is well aware of this issue and has been successful in identifying new ways to reduce upfront costs.

“Contractors in certain parts of the country are pulling together to coordinate resources and lower costs to consumers,” said Litton. “We’ve seen the advent of all-geothermal neighborhoods that leverage economies of scale and wrap the remaining costs into a mortgage. Easy-to-secure, long-term financing is reframing the conversation around low monthly costs and positive cash flow rather than system cost.” 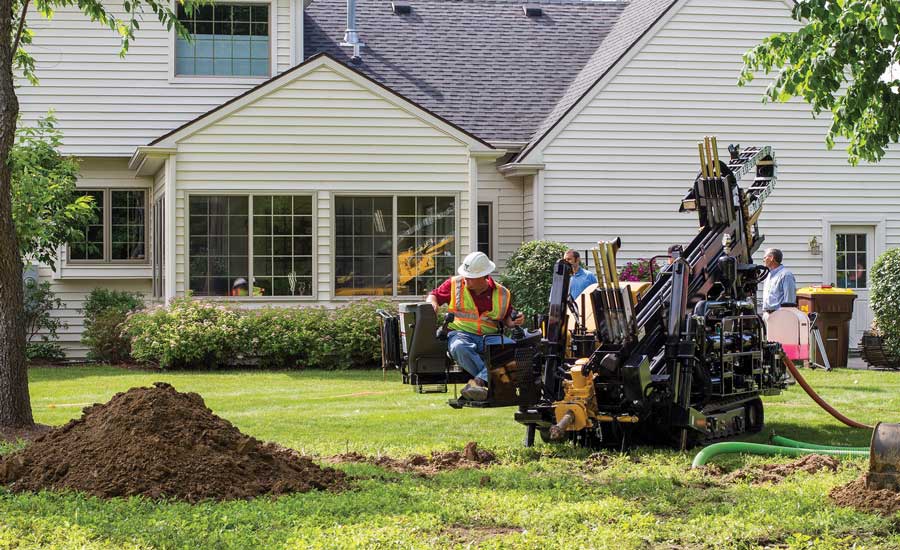 Litton added that utilities are beginning to recognize the tremendous potential geothermal has to help them achieve peak load reductions, reduce capacity constraints, and solve future infrastructure challenges. He said that utilities in states such as New York, South Carolina, and Massachusetts have introduced attractive geothermal incentives and are advertising the technology to customers.

Installing the loop field is the most expensive part of the GHP system, but there are some new drilling technology companies that are moving forward with innovations and out-of-the-box thinking, said Archambault. These include improving the coatings on drill bits and optimizing methods for removing soil from the borehole.

“Another way the industry could reduce costs is to adopt technologies from adjacent industries, such as oil and gas, which could benefit GHP applications — specifically when it comes to boreholes,” he said.

Indeed, the GeoVision report notes that many existing tools and technologies from the oil and gas industry could be used in the geothermal industry, resulting in significant improvements in exploration and drilling success rates — and, in turn, reducing development costs. However, the report adds that modifications will be needed in order to accommodate the higher temperatures and often corrosive environments that are found in geothermal drilling.

Smith is confident that deeper knowledge of ground conductivity and proper loop installation will continue to result in technological improvements that will drive down the cost of geothermal even further. However, he said that what really makes the largest impact on the initial cost is the insulation and the mitigation of heat loss from the home.

“Proper insulation allows the homeowner to achieve the same amazing efficiencies that geothermal provides but from a smaller-sized unit,” he said. “And even though it does not reduce the installation cost, variable-speed technology, combined with greater optimization of the specific components we use, has increased equipment efficiencies by around 25 percent.”

In fact, one of the main reasons why consumers purchase GHP systems is their high levels of energy efficiency, and this should be weighed against the first cost of the installation. As the GeoVision report noted, even though the installation price of a GHP system can be several times that of a conventional heating and cooling system of the same capacity, the additional cost is returned in energy savings within five to 14 years. In addition, system life is estimated to be longer than 24 years for the heat pump equipment and more than 50 years for the ground loop.

Unfortunately, many of the current local efforts focus on technologies other than GHP systems.

“The trend will continue to be electrification, but the easiest and most cost-effective way to switch from fossil fuel heating to electric is by installing an air-source heat pump,” he said. “In New York State alone, there are more than a million homes with oil boilers, which heat water for baseboard heating. There is a huge push with tax incentives and rebates to convert this type of fuel source over to heat pumps. While there are some projects where geothermal is being installed at a community level, the initial cost of GHPs is to blame for these technologies not being more widespread.”

Smith agreed that a shift in public policy would be the largest contributing factor to the growth potential of the geothermal industry. He hopes the growing emphasis on electrification will eventually shift the conversation — and subsidization — to technologies such as GHPs.

“The world does seem to be moving to electrification of its energy, mainly for its cleanliness and efficiency, and that’s geothermal’s wheelhouse,” he said. “As we see the industry and the market penetration today, I do believe that we are poised for at least 15 to 20 percent annual growth. The tax credit, unless extended, will phase out at the end of 2021, but I’m still optimistic about the potential for the industry.”

Litton is also optimistic about the future, noting that growing utility support, combined with federal and state legislation and a continued shift toward energy efficiency, is providing tremendous potential for the geothermal industry.

“Hitting the goal of converting 28 million homes to geothermal will certainly be a challenge, but it may be achievable if we’re successful in addressing the barriers listed in the GeoVision report,” he said.

“But the impact to Americans would be substantial. If just 20 percent of American homes switched to geothermal, the savings in peak electric demand would be the equivalent of installing 21,600 utility scale wind turbines.”