According to industry experts, there is an ample supply of R-22 still available for future use

According to the U.S. Environmental Protection Agency’s (EPA’s) most recent numbers, the total amount of R-22 that was reclaimed in 2017 dipped slightly when compared to 2016 (see table below). That is not necessarily good news for the HVACR industry, given that the production of R-22 will cease at the end of the year. While some may be concerned over whether recovery and reclamation efforts will be sufficient to meet the industry’s needs going forward, refrigerant reclaimers are adamant that R-22 is still widely available, affordable, and legal … and will continue to be so long after production of R-22 ends on Dec. 31.

“The myths about R-22’s demise abound, but the reality is R-22 is readily available now and will be readily available well after 2020,” said Jay Kestenbaum, senior vice president of sales and purchasing, Aspen Refrigerants. “While virgin production and importation is ending this year, the industry has a level of stockpiled R-22 available, as well as a robust reclaimed R-22 supply pipeline, which is anticipated to meet market demand for decades to come. As an industry, we’ve been here before, with the production phaseout of R-11 and R-12 in 1995, and both refrigerants are still available today in ample supply via the reclaim market.” 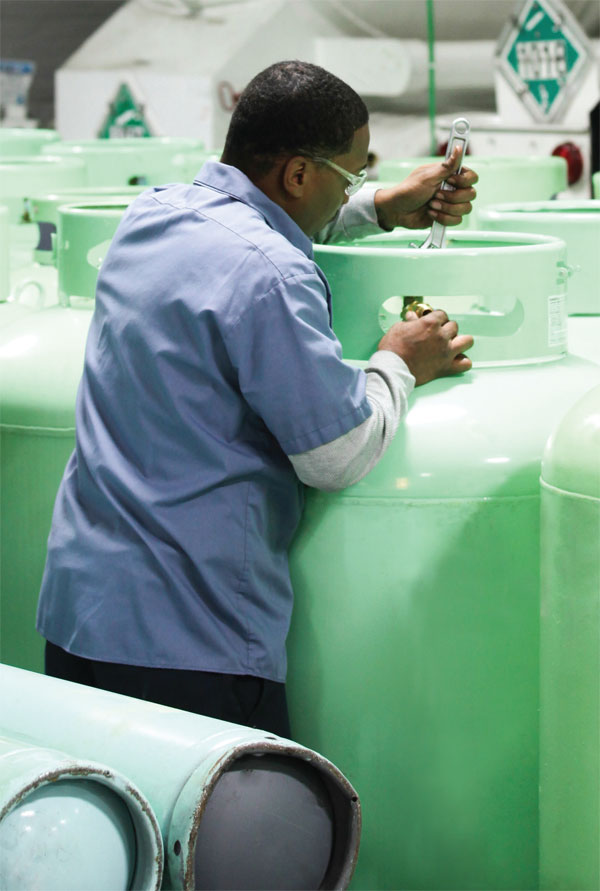 NO SHORTAGE: Given current replacement rates, as well as subsequent reclaimed R-22 each year and continued awareness of the importance of reclaim, Aspen Refrigerants does not anticipate a shortage of R-22 anytime soon.

He added that the reclaim industry is robust and the market is educated about both the importance of refrigerant reclaim and the legal requirements for reclamation.

“While additional reclaim growth will be necessary to support the ongoing installed base of R-22, the gradual replacement market and the subsequent reclaim opportunity that comes along with that will continue to ensure supply meets demand for the foreseeable future,” said Kestenbaum.

Carl Grolle, president of Golden Refrigerants, agrees, noting that overall, the amount of R-22 reclaimed annually should slowly decrease as it becomes less and less of the overall installed base of refrigerant. But there has been some confusion over the expectation that reclamation of R-22 is somehow going to dramatically expand.

“The EPA modeled a large increase in R-22 reclamation starting in 2015, and that expansion was used to cover the anticipated shortfall in the supply of R-22,” said Grolle. “The expansion of reclamation did not happen, but the shortfall of R-22 didn’t happen either. Their models were wrong, just as their models that predicted R-11 would run out shortly after the CFC production was stopped were wrong.”

Grolle noted that reclamation of R-22 last year was fairly consistent with previous years, and he expects similar results this year.

Given its imminent phaseout at the end of the year, it is interesting to note that prices of R-22 have actually decreased over the last 12 months.

“This indicates that R-22 is readily available and that the amount of virgin and reclaimed material is sufficient to meet the installed base of equipment for at least the next few years,” said Glenn Haun, sales director - Americas at Arkema Fluorochemicals. 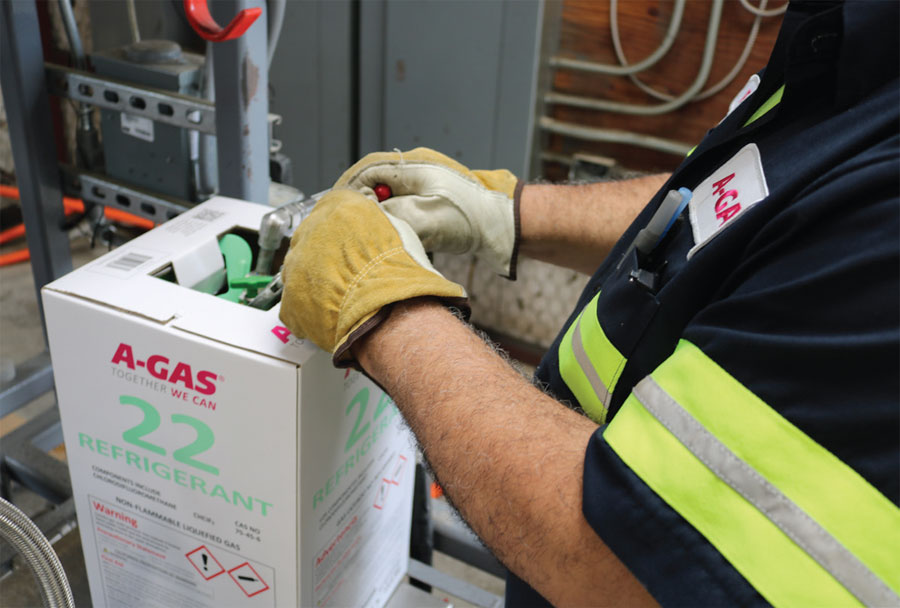 RECOVER EVERY POUND: To ensure continued availability, it is necessary to make sure that every pound of R-22 is recovered and sent to an EPA-certified reclamation facility for processing back to AHRI-700 specification. PHOTO COURTESY OF A-GAS US INC.

Still, it is necessary to make sure that every pound of R-22 is recovered and sent to an EPA-certified reclamation facility for processing back to Air-Conditioning, Heating and Refrigeration Institute (AHRI)-700 specification, said Taylor Ferranti, vice president of refrigerant SBU at A-Gas US Inc.

“We did see a slight dip in reclamation last year, which we believe will recover in 2019,” he said. “The amount of R-22 currently being recovered will not be enough to sustain the installed base of equipment once the stockpiles are depleted. Stockpiled material will only last so long, which is why the key for the future is recovery, separation, and reclamation.”

To that end, reclaimers would like contractors and technicians to be more careful when recovering refrigerant, as there has been an uptick in the amount of mixed refrigerants they are receiving. While most mixed refrigerants can be reclaimed, it can be costly and time consuming.

“The contractors who are mixing refrigerants are adding costs to the collection of the refrigerants, which will eventually lead to higher prices charged to refrigerant that is turned in,” said Grolle.

Kestenbaum added that the percentage of mixed refrigerants has inevitably increased as the number of different replacement refrigerants and alternatives has increased. 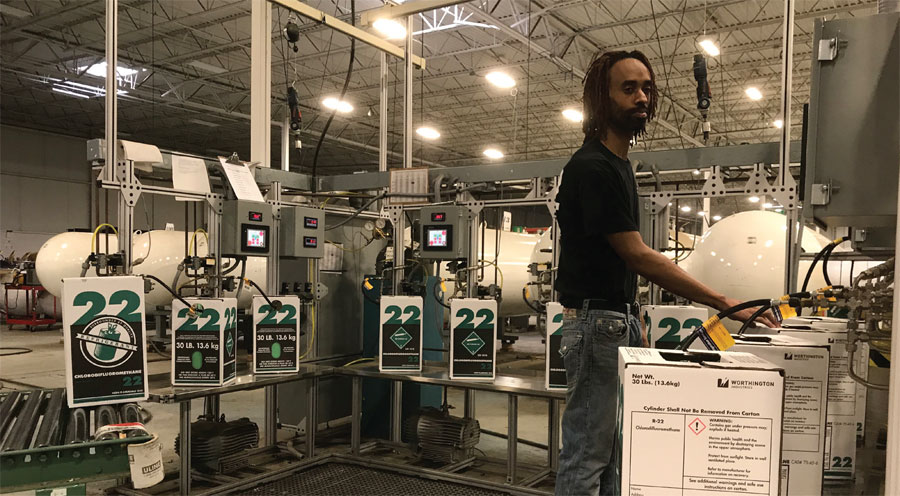 BUSINESS CHALLENGE: Due to the decreasing cost of R-22 and the effect of imported HFCs, reclaimers will be challenged to simply sustain their businesses. PHOTO COURTESY OF GOLDEN REFRIGERANTS

“Education is key to minimizing refrigerant mixing, starting with labeling systems when replacements are installed to ensuring contractors have recovery tanks for each kind of refrigerant,” he said.

Ferranti noted that A-Gas is also seeing an increase in mixed refrigerants, but he said the company views it as an opportunity.

“We are seeing more and more mixed R-22 coming back through reclaim streams,” he said. “But A-Gas is continuing to invest in our world-class separation processes to ensure we can handle all mixes and volumes coming in through recovery/reclamation.”

Another challenge for reclaimers will simply be sustaining their businesses, said Grolle. Not only is the decreasing cost of R-22 an issue, but imported HFCs are having an effect, too.

“HFC dumping by China is in full swing, and despite trade investigations that have concluded that the dumping is real and intentional, the trade commission has chosen not to act,” he said. “HFCs are being sold at prices below the cost of manufacture and reclamation, which places a significant burden on all reclaimers that accept these refrigerants. Successful reclaimers will need to be very cost efficient and carry a low debt burden. It is hard to recognize much opportunity in the reclamation business in the near term.”

These low-cost HFCs flooding the market may also not be of the highest quality, which is why Arkema encourages those in the industry to think carefully before purchasing any refrigerant, said Haun.

“Always buy from reputable suppliers who have a long-term track record of supplying all types of refrigerants,” he said. “We also continue to remind our customers that R-22 use will remain legal after 2020, and that there is adequate supply available for at least the next few years.”

Indeed, combating the perception of an R-22 shortage is what Aspen intends to focus on for the foreseeable future.

“This myth that R-22 won’t be available and won’t be affordable is the biggest challenge to a continuing and growing reclaim market in the coming years,” said Kestenbaum. “If contractors don’t understand the importance of reclaim in continuing to sustain the R-22 market in the years to come, then the myth could be a self-fulfilling prophecy. But this challenge is also the biggest opportunity, and Aspen intends to continue to educate the market from end users to contractors to distributors, as well as to provide best-in-class reclaim programs to support market demands well into the future.”