On Eve of Phaseout, Virgin and Reclaimed R-22 Readily Available

Contractors report that it is relatively easy to find virgin and reclaimed refrigerant in the U.S.

In a recent poll, The ACHR NEWS asked readers whether they were having any difficulty finding virgin and/or reclaimed R-22. After all, as of January 1, 2020, it will no longer be legal to produce or import virgin R-22 in the U.S., so contractors are justifiably worried about ongoing supplies and availability. The good news is that according to the poll, the majority of contractors are having no difficulty obtaining either virgin or reclaimed R-22. (See Figure 1.)

Still, a large number of respondents indicated that they couldn’t always find the refrigerant. That runs counter to refrigerant manufacturers and reclaimers, who insist that the industry has a stockpile of virgin R-22 available, as well as a robust reclaimed R-22 supply pipeline that they say should meet market demand for the foreseeable future.

R-22 will be phased out at the end of the year. Which types of R-22 are you currently having a hard time finding?

As far as availability is concerned, Glenn Haun, sales director at Arkema Inc., noted that the company will be able to supply virgin R-22 to its customers across the U.S. well beyond the December 31, 2019, phaseout date. And so far, the price has remained relatively stable. 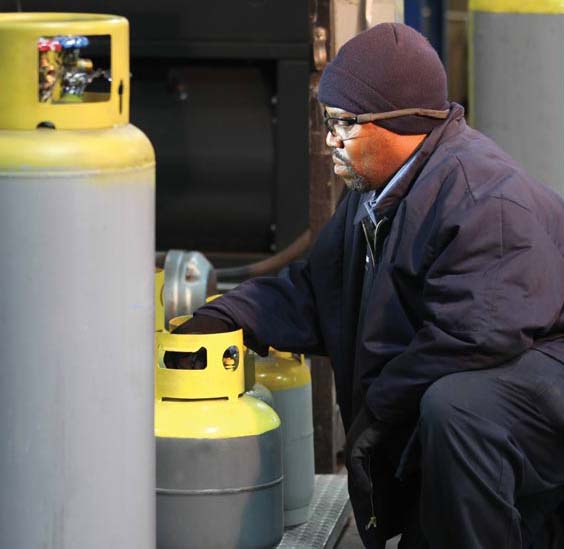 ROBUST RECOVERY: The reclaim channel is robust, and contractors have many places to sell their recovered R-22 to continue to support reclaimed supplies. PHOTO COURTESY OF ASPEN REFRIGERANTS

“The supply of virgin R-22 is most impacted by overall demand and the market price,” he said. “Based on our market analysis, we don’t foresee anything that would quickly deplete the overall stockpile. In the last five years, we saw a rapid increase in pricing for R-22 through 2017, but since then, the price has dramatically decreased. It has been relatively flat throughout 2019.”

While the size of virgin refrigerant stockpiles is relatively unknown, Jay Kestenbaum, senior vice president of sales and purchasing at Aspen Refrigerants, does not expect to see any shortages of R-22. That’s because he said the industry has planned for the end of production for many years, and there are numerous supply channels that are prepared to support the market for years to come.

“It really is no different than the R-11, R-12, CFC phaseout story — 23 years ago, CFC virgin production was phased out and still to this day, reclaimed R-11 and R-12 continues to support the installed base of equipment throughout the country,” he said. “As with the CFC phaseout, we believe that pricing will be based on a normal supply/demand balance, and we are not expecting the large price swings that we saw over the past five years. It is our belief that much of these previous price movements were not based on normal economics.” 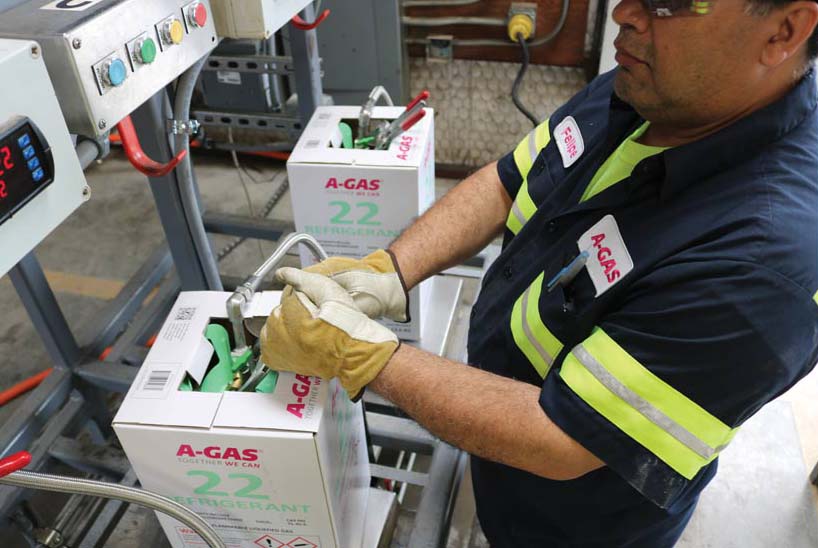 SAME QUALITY: There is no difference in quality when purchasing reclaimed refrigerant, as both reclaimed and virgin products are required to meet the same AHRI specifications. PHOTO COURTESY OF A-GAS

One thing contractors should understand is that there is no difference in quality when purchasing reclaimed materials, as both reclaimed and virgin products are required to meet the same AHRI Standard 700 specifications concerning refrigerant quality, said Taylor Ferranti, vice president of refrigerants at A-Gas. That said, he noted that both products are readily available in the U.S.

“I believe there will be virgin R-22 for years to come,” he said. “Will virgin be the majority of the pounds sold in the future? No, I do not believe so. Each year, availability will tighten up, but I do not expect a geographic shortage of virgin or reclaimed R-22. However, the only way to ensure R-22 supply is for the industry to increase recovery and reclamation efforts.” 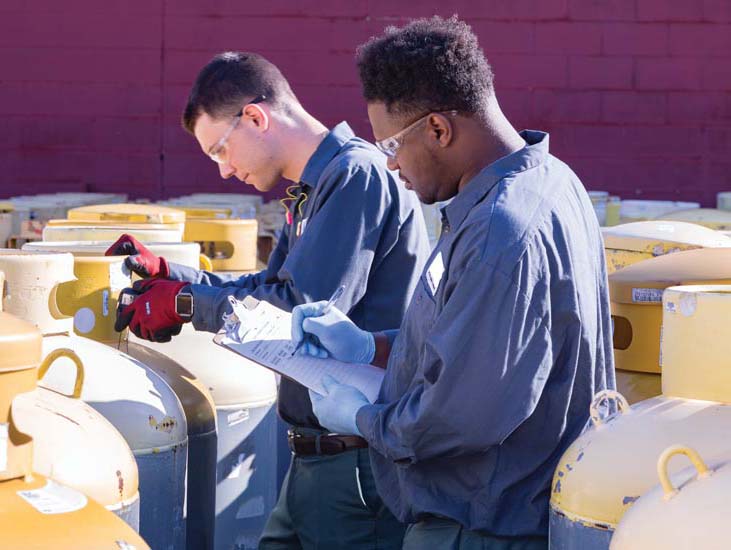 AMPLE SUPPLIES: Although there are ample supplies for now, there is a need to increase the amount of R-22 being recovered and reclaimed in order to protect long-term supply needs. PHOTO COURTESY OF ASPEN REFRIGERANTS

Kestenbaum agreed, noting that while there are ample supplies of R-22 readily available throughout the U.S., a robust reclamation market will be required to provide enough supply in later years.

“There is a need for an increase in the amount of R-22 being recovered and reclaimed in order to protect long-term supply needs,” he said. “The industry has proven it can support its own needs over several decades through reclaim, as we’ve seen with the CFC phaseout, and as we move further away from the phaseout date, the importance of reclaim will likely be a driving factor to increase reclaim percentages and volume.”

REPORTS FROM THE FIELD

So far, finding virgin R-22 has not been a problem for Audrey Monell, president of Forrest Anderson Plumbing & Air Conditioning Inc. in Glendale, Arizona, although she expects that may be more of an issue after the phaseout date. Approximately 35 percent of her customers still have systems that utilize R-22, and of that number, 75 percent are commercial applications and 25 percent are residential.

“I expect that R-22 units will still be needing service for the next 10 years,” she said. “We have some diehard customers who aren’t ready to change out their units anytime soon. We do let them know about the phaseout so they can plan for the future replacement of an older unit or understand why the cost of the older refrigerant is getting so expensive.”

As for now, Monell said they still offer virgin R-22 for minor repairs or for specific units that don’t react well to the drop-in replacements. For other units, they may use R-407C, which Monell said has the least efficiency loss and best oil migration. The company does not use reclaimed R-22.

Jason Ellington, president of Ellington Air Conditioning & Heat in Rockledge, Florida, has not offered virgin or reclaimed R-22 for several years. The vast majority of his customers use R-410A, but he stopped using R-22 a while ago due to environmental concerns and price volatility. For those R-22 units he still encounters, he retrofits them to what he considers to be a more environmentally friendly refrigerant.

“After much research, we choose R-427A,” he said. “It is our company policy with any leaking R-22 system we encounter to convert it to R-427A and then properly identify the unit so others will know it has the new refrigerant. It’s just one of the ways we act in a climate-friendly manner.”

Chad Baumann, sales manager, Baumann & DeGroot Heating & Cooling in Holland, Michigan, has had no trouble finding virgin or reclaimed R-22. The company buys in bulk, so when pricing and availability are good, they buy a pallet of virgin R-22 and stockpile it. In the past, they have purchased reclaimed R-22, but Baumann said they had too many issues with bad valve stems from the supplier, so they haven’t bought any recently.

“About 30 to 40 percent of our customers still have R-22 systems, but I figure in the next 10 years, that number will be closer to 5 to 10 percent,” he said. “Virgin R-22 will likely be available for another couple years, but it will ultimately run out, so in the next five to 10 years, we will be forced to move to reclaimed refrigerant or a substitute. We rarely use substitutes now, because the cost isn’t substantially better and there are always side effects. So far, prices of R-22 have been fairly steady this year, and it feels like demand for it is falling in step with supply.” 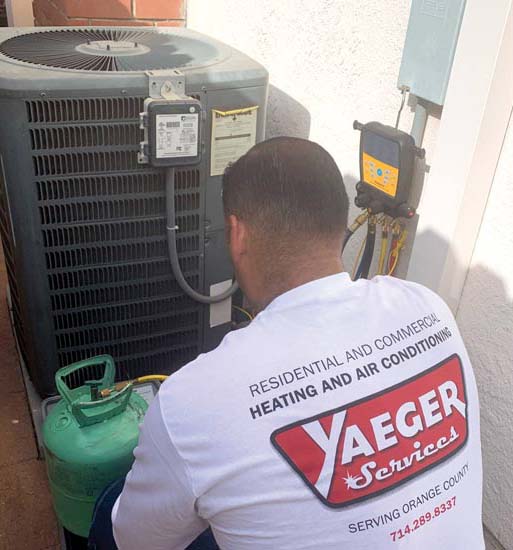 HARD TO FIND: About 50 percent of customers at Yaeger Services Inc. still use R-22, and while the company has not had any trouble buying virgin R-22, reclaimed R-22 has been harder to find.

About 50 percent of customers at Yaeger Services Inc. in Orange, California, still use R-22, and owner Curt Yaeger expects some of these units will still be operational 20 or 30 years from now.

“We are still replacing systems that are 40-plus years old, and some are still running,” he said. “Most folks will not change out equipment until it fails and/or the cost of repair is not justifiable.”

To date, Yaeger has had no trouble buying virgin R-22. He would prefer to stay away from substitute products, because he wants to minimize the number of different refrigerants he carries on his trucks. As for using reclaimed refrigerant, he wouldn’t mind buying it — if only he could find it.

“So far, the local supply houses here in Southern California are not interested in carrying the reclaimed refrigerant,” he said. “Time will tell when the virgin runs out.”

Ultimately, the whole industry is interested in seeing what will happen when virgin R-22 is no longer available. Given the existing stockpiles, coupled with the availability of reclaimed and substitute refrigerants, no one should be worried about shortages anytime soon.