This website requires certain cookies to work and uses other cookies to help you have the best experience. By visiting this website, certain cookies have already been set, which you may delete and block. By closing this message or continuing to use our site, you agree to the use of cookies. Visit our updated privacy and cookie policy to learn more.
Home » Johnson Controls Expands Its Rooftop Manufacturing Facility
HVAC Light Commercial MarketHVAC Commercial MarketRooftop Units

Dubbed the Rooftop Center of Excellence, the facility will serve as the flagship location for industry research, manufacturing, and testing of Johnson Controls HVAC rooftop units. Most importantly for the community of Norman, Oklahoma, the expanded facility will result in the addition of about 300 jobs.

The gleaming new addition offers many exciting features, such as an extensive laboratory that will allow Johnson Controls to conduct on-site, complex development; regulatory compliance; and performance, safety, and reliability testing, including the ability to test a 150-ton rooftop unit in climates ranging from minus 30º to 130ºF. But when asked which feature Bill Jackson, president of global products, building technologies, and solutions, Johnson Controls, is most proud of, he did not hesitate to say it’s the people who work there. 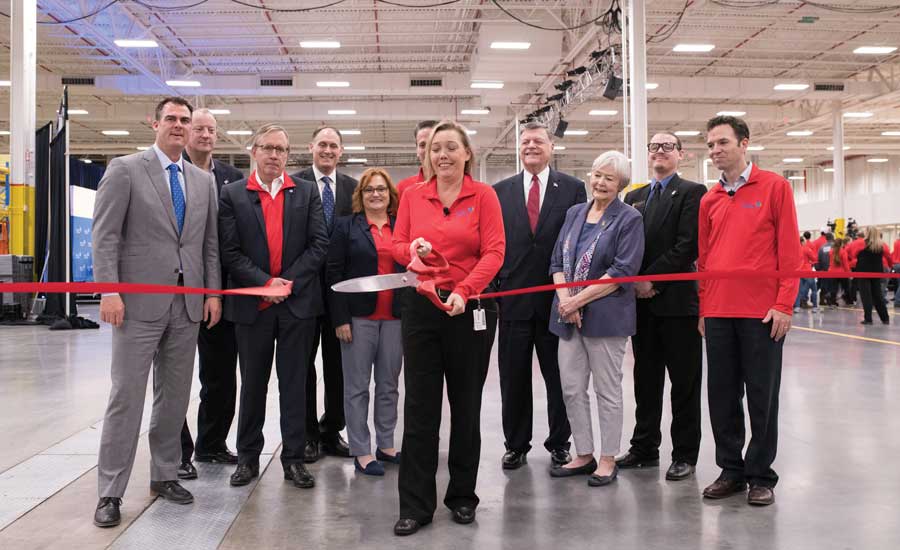 “We have a great team here,” said Jackson. “Our plant manager, Vicki Davis, first entered this facility when she was two years old. Her mom is the safety coordinator and has worked here for 46 years, and now many of her relatives are here, too. This is not just a job. This is a family. And that’s not just Vicki — it’s a whole group of people. We represent something that’s really important to the families of Norman.”

Matthew Shaub, vice president and general manager of Commercial Ducted Systems, Johnson Controls, agreed, noting, “One of the things I’m most thrilled about is the employees that we have here who make it all possible.”

There is no question that all those dedicated people now have a stunning new place to work. The state-of-the-art laboratory is dedicated to testing packaged rooftop units, and being co-located with the manufacturing side of the business will allow for the best possible innovations across all the teams, said Shaub. 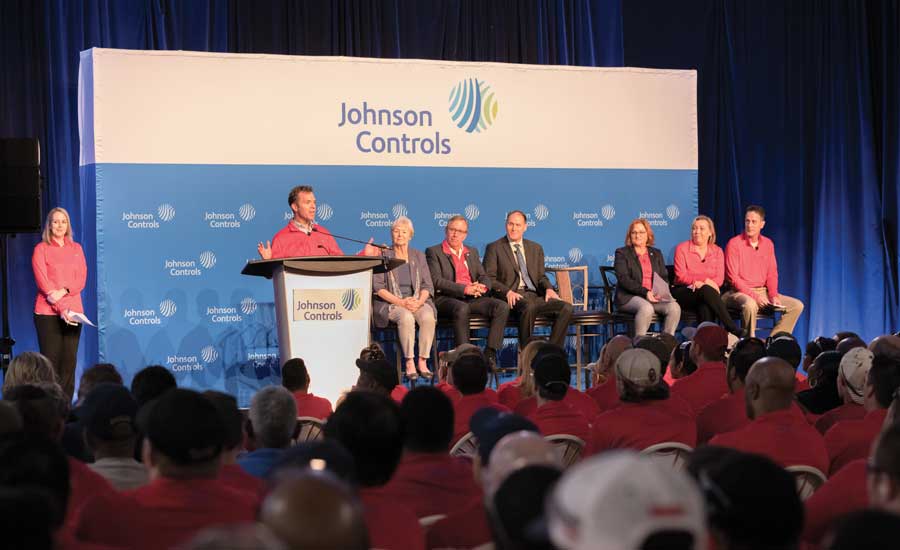 “The testing facility has expanded our capabilities by about 250 percent, which is really important due to all the regulations,” he said. “This is a tough time for the industry, as the frequency of regulatory change continues to quicken. We’ve all got refrigerants on our minds as we look toward the future. We needed facilities that would allow us to keep pace with that change and to ultimately bring forward the right products at the highest levels of performance and quality to meet our customers’ needs.”

The new testing facility in Norman is particularly important as far as refrigerants are concerned, because it will help Johnson Controls determine which one(s) will best serve their customers’ needs in terms of performance, reliability, and safety.

“We don’t know how the refrigerant question will play out, but we, along with many of our competitors, are actively trying to solve that issue right now,” said Shaub. “Part of the testing capabilities that we’ve invested in allows us the bandwidth to be able to commit to our regular product development, as well as innovate around refrigerant development. We’re working on that both here in our commercial facility, as well as in our Wichita, Kansas, facility, which serves our residential business. We’re trying to get to the right technical solutions that will ensure a safe and quality outcome for the industry, which includes collaborating closely with the fluid manufacturers and compressor manufacturers. The entire industry is trying to get to the right answer.”

Going forward, the expanded manufacturing capabilities will be instrumental in meeting the increasing demand for rooftop units, which have been one of the fastest growing segments of the market over the last 10 years, said Shaub. He noted that rooftop units are now the largest commercial equipment category at Johnson Controls in North America.

“Because rooftops tend to be the lowest installed dollar-per-ton offering for a typical mid-market building, there’s a huge installed base,” he said. “The trend for ongoing replacements into perpetuity is one of the natural dynamics of the rooftop market. We need to make sure that we’re able to facilitate and participate in serving that replacement market. That will be a priority for us.”

That may be a difficult proposition, as manufacturers will have to take upcoming regulatory requirements into consideration when addressing the huge replacement market. The next set of regulations will involve increasing the minimum efficiency of rooftop units by 25 to 30 percent as of Jan. 1, 2023.

“How we meet those regulatory requirements on that existing footprint will become a real innovation challenge,” said Shaub. “Material choices, how we address part-load efficiency with our control algorithms — many of those proprietary — all of that comes to roost in really unique product solutions that are able to deliver higher performance in a compact footprint.”

Another trend that Shaub is seeing involves the growing use of rooftop units in place of traditional complex applied systems that are typically used in higher-end applications. He said that many end users are now looking to large DX equipment as a value-engineered alternative to more expensive options such as chillers.

“This means we will be putting more capability into products, including higher-efficiency filtration, humidification, energy recovery technology, variable-speed compressors, and direct-drive plenum fans to really optimize airflow,” Shaub said. “Outfitting DX equipment at a real value price point with some of those accoutrements will provide some flexibility in looking at alternative HVAC system designs that have a more attractive budget to owners. We’re expecting DX products to continue to grow into some of that space.”

Johnson Controls has also embedded intelligent technology into its rooftop units to make the equipment not only easier to install, but more energy efficient.

“Verasys is our configurable tool that is a nice control system for medium and light commercial buildings,” said Jackson. “It sees all the pieces in the system and can configure everything into the network. It takes a minimum of 10 to 15 percent of the time off the job. The fault diagnostics in all our rooftops allow real-time feeds to see how they’re performing. We also have machine learning embedded in the control systems, so our rooftops can understand local weather conditions and create a machine-learned capability. Our commitment to the whole concept of rethinking how controls work in a building is where we’re headed. We have completely changed the way we think about the world.”

To better appreciate all the technological advances taking place at Johnson Controls, Shaub welcomes industry professionals to come and visit their new facility.

“I’d like to extend an invitation to The NEWS’ readership,” he said. “When customers come to interact with our team here and experience firsthand the full breadth of capabilities and innovation, it really creates an immersive experience that helps them see what Johnson Controls is all about. We certainly welcome visitors.”