There are golf courses, and then there are elite, world-renowned country clubs. Most often, what sets them apart comes down to real estate, luxury, aesthetics, and playing surface.

It’s a point of distinction rarely appreciated outside the exclusive culture of golf. Groomed, nourished, and perfected — it’s tough to improve so mature an art form. Yet, the managers and groundskeepers at Southern Hills Country Club (SHCC) in Tulsa, Oklahoma, have raised the bar. 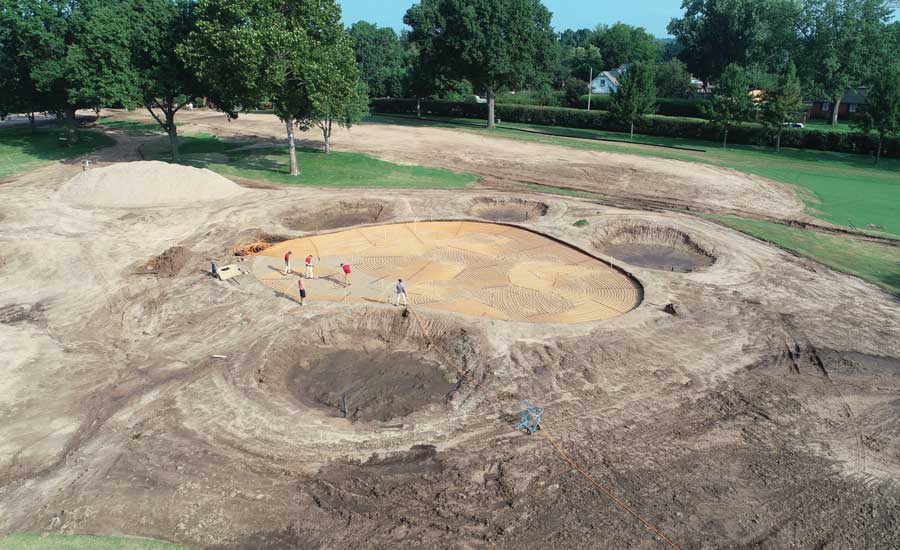 BIG JOB: After the country club voted to install green conditioning systems in 2016, the 300-acre property was closed in early 2018 to permit renovations.

Founded in 1936, SHCC is a private, member-owned course. It’s recognized among the top 100 courses in the world and has been host to 15 major championships since 1946, including the PGA Championship — four times.

To be esteemed as one of the nation’s leading courses takes an incredible level of commitment to the game, facilities, and player experience. SHCC has dedicated itself to maintaining a prestigious reputation for more than 80 years. One look at their greens tells the whole story. 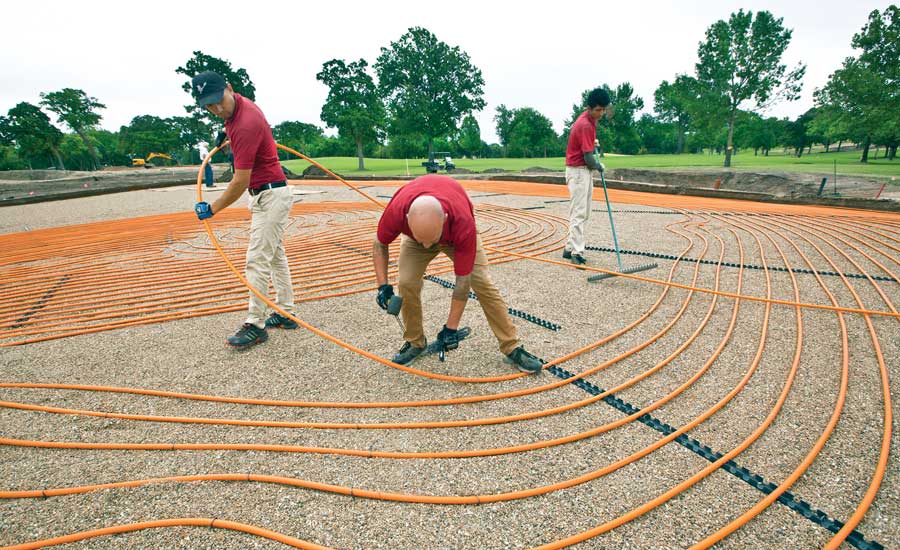 SHCC is and has been committed to growing a bentgrass variety called Pure Distinction on its greens despite Tulsa’s hot summers, which can take a toll on playing surfaces. Bentgrass thrives in soil temperatures around 78°F.

“As you’d expect, our worst months are July and August, when we can see soil temps of 90°,” Myers said. “A difference of just 5° can be a concern. Hot weather, combined with the traffic of sustained golf play, can really stress a green if not meticulously cared for. The only way to improve upon a professional bentgrass green is to condition it.”

Over the past 12 years, SHCC has discussed and planned the installation of a hydronic green warming and cooling system across 24 playing surfaces. After being voted on in 2016, the 300-acre property was closed in early 2018 for renovations. 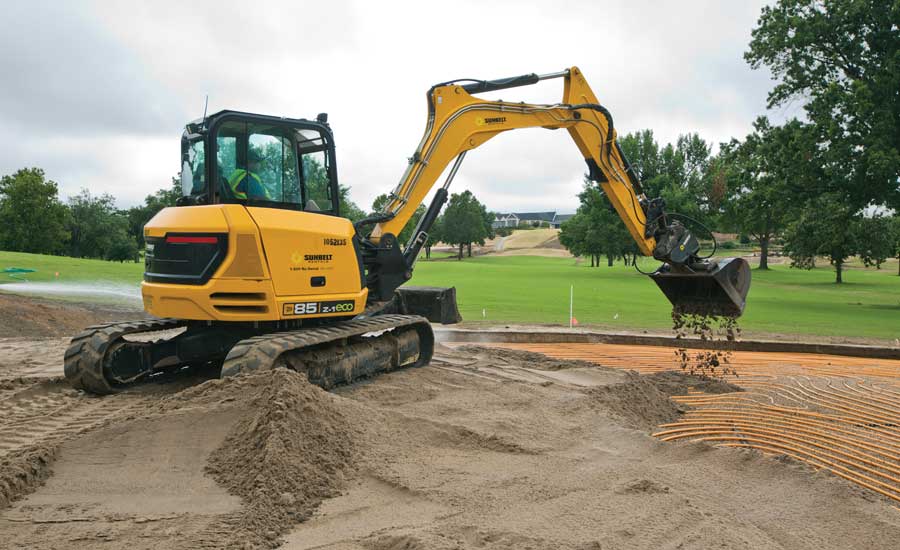 COVERING IT UP: Once tubing is installed, a layer of “greens mix” — made of sand and peat — is carefully distributed before the green is seeded.

The conditioning system at SHCC would become the first of its kind, capable of operating simultaneously across every green. Shortly after the decision was made, Cary Pestel — president at Boone & Boone Sales, a manufacturer’s rep for Watts — called on Myers to discuss planning and design of the system. He knew that Watts had extensive experience with a variety of turf conditioning applications.

“From the beginning, the concept was to run hydronic tubing under the green surface,” explained Pestel. “Cooling was the priority, though having the ability to warm the soil would extend the playing season and permit green maintenance to take place during off-peak playing times. The question quickly became, ‘how do we provide chilled and warm water?’”

Geothermal was initially considered until it was ruled out due to expense. For a while, a boiler/chiller design was discussed, but the cost of running both gas lines and three-phase power throughout the property, in separate trenches, was prohibitive.

At this point, Pestel contacted Technical Systems Inc. (TSI), a division of RAE Corp. TSI was well-suited for the project, as the company builds custom chillers and heat pumps. During an initial site visit, TSI proposed using custom air-to-water heat pumps — just one piece of equipment to heat and cool the greens instead of boilers and chillers.

“The biggest logistical consideration Myers had with heat pumps was the need for three-phase power at each of the 24 greens and practice surfaces,” said David Harris, RAE Corp. account manager. “The challenge was to see if a few large custom heat pumps could serve numerous greens.”

Watts and TSI determined the initial load and water temperature calculation based on the greens’ required 3.5 tons of cooling per 1,000 square feet. This would allow soil temperatures to be lowered by as much as 15°, maintaining between 65° and 80° throughout the year.

TSI used that information to calculate the heating and cooling capacity needed for each green. Meanwhile, Kolyn Marshall, system engineering manager at Watts, worked on the piping design. This allowed new line losses to and from the greens to be calculated.

“You can do just about anything with the right-sized heat sink and properly designed piping,” said Marshall. “It was more a matter of optimizing upfront cost, efficiency, and performance. We looked at the loads and compared options in pipe sizing and general design. For example, larger pipe sizes would have lowered head requirements, but meant higher cost. The location and total number of heat pumps had a bigger impact on supply and return piping to the manifolds, but it still affected the tubing layout design.”

TSI’s initial proposal was based on a design using six heat pumps to serve the entire golf course: three 100-ton units and three 50-ton units. During subsequent discussions, the number of heat pumps was reduced to four: a 200-ton, 133-ton, 123-ton, and 110-ton pump.

“Using as few units as possible was critical to Southern Hills because they didn’t want equipment detracting from the golf experience,” said Harris. “It also reduced the distance that power needed to be stretched. Once the locations were decided, TSI designed the heat pumps to meet loads.”

“The main difference between this project and a ‘normal’ air-to-water heat pump application was having to pump water such long distances,” said Brett Cobler, RAE Corp. senior project engineer. “A low-pressure system was needed, but we still had to economically pump hot or cold water through 9,000 linear feet of tubing for any given green.” 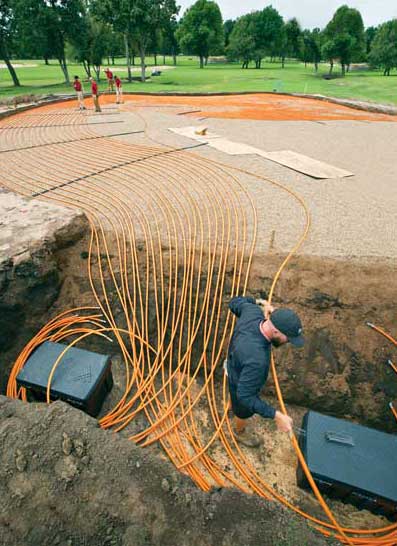 DOWN TO IT: All radiant loops terminate in an underground manifold box.

From the chiller, golf course irrigation specialists from Formost Construction trenched and installed two-inch polyethylene supply and return pipe to remote manifolds. Each of the copper Watts manifolds is contained inside an underground manifold box. From there, ¾-inch Watts RadiantPERT tubing was installed below the sod level. This provides a 35 to 45 gpm flow rate to the green, depending on the size of the green surface.

Limiting upfront cost through careful design was only one need among several that TSI and Watts were tasked with. Quiet operation, energy efficiency, and aesthetics were equally important. 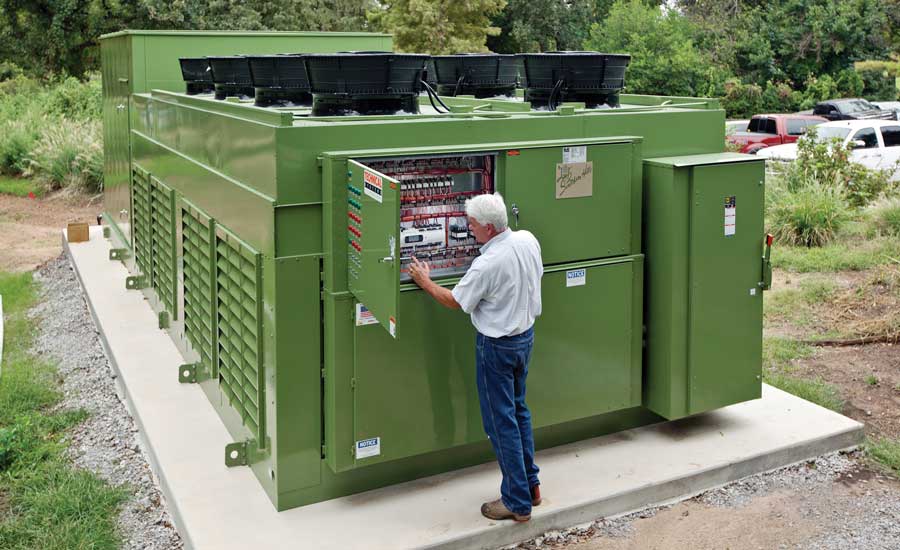 The heat pumps were custom designed to meet SHCC’s requirements.

Each unit contains multiple compressors and refrigerant circuits, modulating up or down to match a changing load. All fans are powered by electronically commutated motors, offering high efficiency, variable-speed control, and low-noise operation. Sound insulating covers were installed on the compressors and louvers, and off-site control is provided by a full direct drive control system.

Each of the four TSI air-to-water heat pumps also have an integrated variable-flow pump located in an insulated cabinet along with a brazed-plate heat exchanger and control valves. This eliminates unsightly outdoor pump skids or the need for separate mechanical rooms. Finally, after the units were factory tested, they were painted green to minimize visual impact.

Once the systems were installed, startup was a collaborative effort on the parts of TSI, Boone Sales, and Soder Mechanical, a subcontractor hired by SHCC.

“This was a learning process for all of us,” said Pestel. “But the design phase was greatly simplified because of Russ Myers’ past experience with surface conditioning at golf courses.” 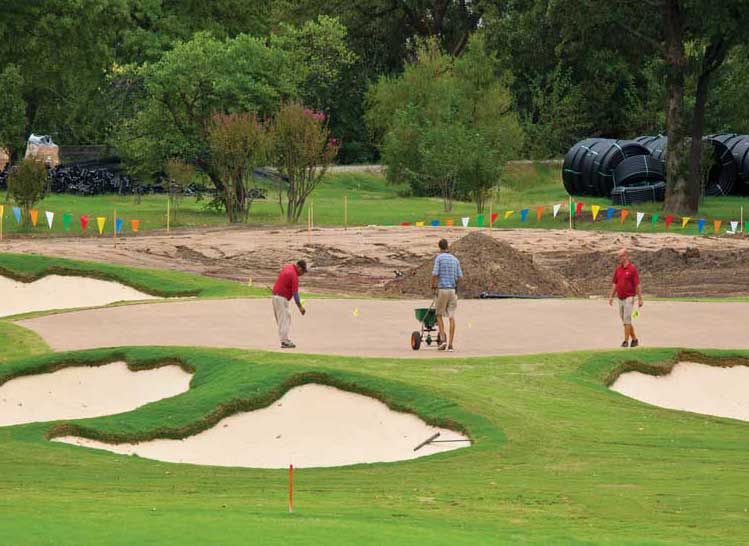 Myers likely knows more about golf green conditioning than anyone else in the country. The first commercial hydronic green conditioning system of any merit was installed at Augusta National Golf Club in the 1980s, where Myers was employed in the late 1990s. Starting in 2010, he installed two similar systems at the LA County Club. In 2016, he returned to SHCC with the experience he’d gained.

“The hydronic system installed at SHCC provides the greatest benefit available in terms of controlling climatic conditions,” Myers said. “There’s no question the investment made by the club will pay dividends year-round. Our members hope to play golf whenever they can, and this increases that possibility. It’s a major differentiating factor for Southern Hills Country Club.

“While I’ve been a part of installing this system multiple times, the real credit goes to the Club Leadership at Southern Hills,” Myers continued. “Every superintendent would love to be able to manipulate the temperature of the soil with hydronics.”

Dan Vastyan is a contributing writer and the PR Director for Common Ground.