For HVAC pros interested in motors and drives, Tuesday afternoon at this year’s AHR Expo in Atlanta featured a good chance to give the feet a rest and focus on the mind for a while. Air-Conditioning, Heating and Refrigeration Institute (AHRI) presented a three-phase session called VFDs: Method of Laboratory Test and a Case Study.

Lab tests may sound mildly interesting at best for some. However, Schneider Electric’s vice president of marketing, Thomas Lowery, served an effective refresher on why variable-frequency drives (VFDs) are worth the effort in the first place and why a certified product matters. Both are meaningful for contractors, too, as it turns out. 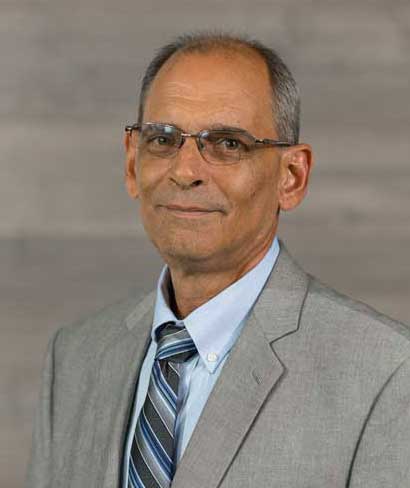 CONSISTENCY COUNTS: Thomas Lowery of Schneider-Electric outlined how AHRI 1210/1211 is designed to provide a new tool to compare performance criteria of manufacturers under standardized processes and conditions.

Lowery began with some less math-oriented attributes. System and environmental variables are changing all the time — occupancy, humidity, indoor and outdoor temperature, shifting day and night circumstances, and demands. VFDs provide some flexibility to hunt for the moving target of optimum operation.

In addition, Lowery described VFDs as “very soft starting, and they start slowly,” both of which avoid unnecessary strain on and reduced lifespan for multiple components in the system.

Gentle conduct aside, it won’t surprise many to hear that energy savings on basic centrifugal loads is the main driver for VFDs. Lowery set up the “magic” of the savings opportunity with the fact that flow varies linearly with speed, but pressure (torque) varies as the square of speed.

The kicker, so to speak, is the way that power varies as the cube of speed.

Loading of variable air volume (VAV) systems requires dynamic control of the motors, Lowery said. Oversized system designs (and what percentage of systems are oversized?) benefit from this adaptability.

Moving from physics into the marketplace, the next question was, “Why use a certified product?”

Lowery (and AHRI) make the case that the group has built credibility as an independent organization that is recognized through the industry for exactly these activities.

In other words, as Lowery put it, “You can believe the numbers.”

He went on to say that AHRI Standard 1210 (IP) and 1211 (SI) Performance Rating of Variable Frequency Drives establishes a common method of test, including harmonics and other factors. The result is that professionals “no longer have to rely on manufacturers’ data, which may not reflect equal operating conditions.” It creates an improved workspace for specifiers, customers, and those in the chain in between who will become involved with potential misunderstandings, misapplications, or replacement/repair jobs.

Lowery did acknowledge that the standard does not cover every usage. 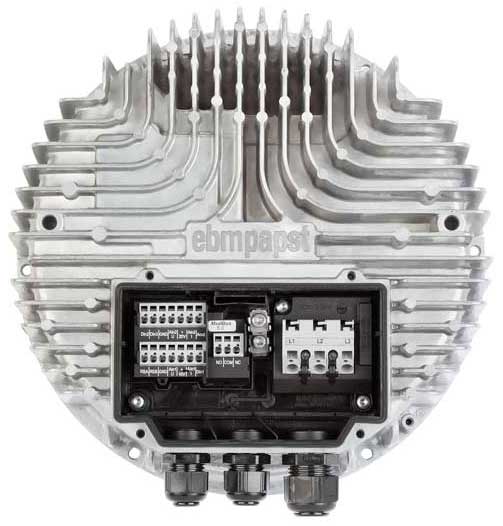 IN THE HOUSE: An example of a power drive system (PDS) with 1-hp maximum output. The necessary electronics (aka complete drive module, or CDM) are entirely integrated in the motor casing. PHOTO COURTESY OF EBM-PAPST

The process can test for variable torque or constant torque. All told, the AHRI 1210/1211 certification process involves four steps, with seven tasks throughout those steps.

The testing results use a simple pass/fail basis. Lowery’s visual materials reported that testing is done annually, and equipment that fails the test may be retested later (or VFDs are re-rated).

A noteworthy aspect of the standard’s approach is that its testing does include the motor efficiency, Lowery emphasized, since for these purposes, every drive is connected to a motor.

In closing, Lowery summarized the upside of this standard. It gives engineers and others a new tool to compare performance criteria between manufacturers under a standardized process and conditions. Customers are guaranteed that the certified VFD will meet minimum efficiency, harmonic, and voltage delta levels. Certified drives will also complement other equipment that is being specified using other AHRI standards and programs.

“[It will] benefit the engineer who designs it, the contractor who installs it, and the end user who winds up paying the operating cost,” Lowery concluded.

Armin Hauer of ebm-papst is the company’s manager for regulatory and government affairs. He delved further into the technical and procedural aspects of the certification testing. HOLISTIC THINKING: Armin Hauer of ebm-papst relayed how the testing delivers assessments for wire-to-shaft efficiency — measuring both where the wires are connected to the motor system and at the motor shaft — to better reflect real-life user concerns.

He said that the method varies the connected motor load and measures motor stress in terms of voltage rise time and peak voltage (the lower the voltage and the longer the time, the happier the motor, he explained). It also measures the candidate’s harmonic current emission spectrum.

What the process is not doing is evaluating motors separate from the electronics.

“We are interested in the efficiency exactly as the user would experience it,” Hauer said.

Another intended benefit is that this new scope of testing is not limited to certain motor or drive technologies. It can test electronic drives designed for use with interchangeable motors connected with cable, or it can measure performance where the drive electronics are built in.

While the focus thus far has been on what the standard’s testing can do, Hauer took a minute to clarify what this process does not deal with. Specifically, it doesn’t get into speed and torque load points, source voltage and frequency, and motor conductor lengths. But Hauer pointed out that these are instead itemized in the AHRI certification program.

Ken Fonstad, formerly of ABB and now of Technical Assistance, filled in for originally scheduled Bill Mudge of Danfoss to deliver the third part of the session. He told the story of a 64-story, nearly 50-year-old building that has seen a series of conditions and occasional retrofits over the years. The building has no taper, with each floor spanning an acre. All told, it contains 2.3 million square feet of leasable space. 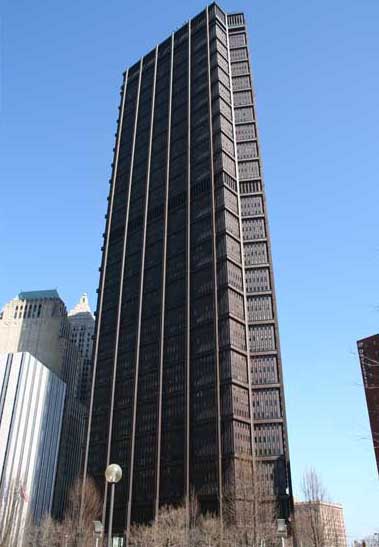 TALL CASE STUDY: A series of 21st-century VFD projects for this 64-story, 49-year-old building has produced significant savings for owners and tenants while reducing the building’s peak demand by more than 37 percent. PHOTO COURTESY OF DANFOSS

On one hand, the building’s “journey” sounds unusual, but on the other hand, it wound up reflecting some common generational changes in conventional wisdom, societal circumstances, and equipment.

The tower started as an “energy hog,” as Fonstad put it, featuring redundant pairs of 100-hp pumps that were alternated weekly. This system generated a lot of stress on the pumps. Transitions were not smooth. Premature pump wear was the result, and Fonstad noted that pumps do not like being oversized.

In 2000, a system update to VFDs reduced that stress and provided the expected efficiency boost. In fact, ownership did not even measure the savings. The project completely eliminated the need to continually rebuild the pumps. That was the big victory for ownership, and after that, the details didn’t really matter to them.

Skip to 2008, when the state mandated energy cuts and limited peak electrical demand.

Part of the state’s initiative involved a new rebate program. The owners now applied VFDs to many of the larger circulation fans and then later did the same for the smaller fans.

That program saved over $530,000 annually, generated a one-year payback, and indirectly reduced rents by decreasing utility costs. A true win-win-win.

The building’s journey through VFD opportunities next picked up in 2011-2013. Chilled water and water preheat loops got VFDs in 2011, followed by 40 pump motors of various sizes. Annual savings: $138,000.

How does all that stack up at the end of the day, beyond a lot of money saved? By 2009, the building’s annual energy consumption had dropped from 65 million kWh down to 43 million kWh.

During that same period, Fonstad said, the soft transitions facilitated by the VFDs steered the building’s peak demand from 16-17 MW down to 10 MW.

The lowered energy and maintenance costs have contributed to a 98 percent occupancy level, Fonstad said. He noted that 17 individual floors had earned LEED Silver, with six others earning LEED Gold.

What does any of this have to do with AHRI 1210/1211? Fonstad pointed out that the first phase of trouble was pump operation, and that it’s important to ensure the VFD and motor will work together reliably. That often isn’t the case, he said, if a new drive is introduced and is “too rough” with an old motor.

The certified values of rise time and peak values of the PWM pulses are two elements that professionals can use to evaluate that compatibility.

The three presenters then opened the floor to questions, with Fonstad fielding the bulk of them.

One attendee outlined how National Electrical Manufacturers Association (NEMA) says a motor can only be started a certain amount of times per hour, even if the manufacturer says it can start and stop 200 times an hour. “How,” he asked, “can you show the benefit of the VFD with a low-torque application allowing more starts than NEMA indicates?”

Fonstad drew a “teenage son analogy” of how a car’s transmission wears when the father drives it compared to how the wear progresses when his son drives it.

Back in the field, he said, “You might be able to convince him by going to the drive’s display and showing him the current, then restart and show him the current is not going through the roof,” to demonstrate that the drive is “being very nice” with startup.

But, he acknowledged, “if the guy’s too old, like me, you may never convince him, and you’ll have to wait until he retires.”