This website requires certain cookies to work and uses other cookies to help you have the best experience. By visiting this website, certain cookies have already been set, which you may delete and block. By closing this message or continuing to use our site, you agree to the use of cookies. Visit our updated privacy and cookie policy to learn more.
Home » For 55 Years, ZoneFirst Has Provided the HVAC Industry With ‘Energy Saving Comfort’
HVAC Residential MarketResidential ControlsZoning

For 55 Years, ZoneFirst Has Provided the HVAC Industry With ‘Energy Saving Comfort’

The company celebrates another year in the comfort zone

ATLANTA — Dick Foster has been preaching the positives of zoning for years. As the owner of ZoneFirst, he has dedicated his life and career to this technology, and it has been a bit of an uphill battle.

“Contractors don’t sell zoning,” he said. “They have an aversion to it. They say it is too expensive, don’t think it works, they say it is too hard. We continue to stress why you should be selling zoning. People want to buy it. Our cars are zoned, why shouldn’t our homes be?”

As ZoneFirst celebrates its 55th anniversary in 2019, Foster once again stood his ground in his booth at the AHR Expo, explaining the benefits of zoning and countering the misconceptions about the concept.

“I don’t think we are at the tipping point, but we will get there,” Foster said. “At this point, we are 4 percent of the market.”

ZoneFirst’s parent company, Trolex Corp., was incorporated in 1964, and for 35 years, sold the Trol-A-Temp brand name. In 1999, Trolex sold the assets of Trol-A-Temp to Honeywell and continued manufacturing zone dampers for several OEMs. In 2004, Trolex re-entered the HVAC trade as ZoneFirst, offering several new and innovative technologies, including motorized retrofit dampers, colored wiring terminals on all its zone panels, and pre-wired zone dampers for plug-and-play damper wiring.

Foster stated the new name represents numerous firsts introduced by the company in developing the market for zone damper systems.

The company continues to promote zoning all forced-air systems and stresses the great opportunity to save energy by zoning. ZoneFirst’s website has several studies showing as much as 30 percent energy savings over single-zone systems. “Energy Saving Comfort” is the motto of the company, emphasizing that no one needs to sacrifice comfort to save energy. 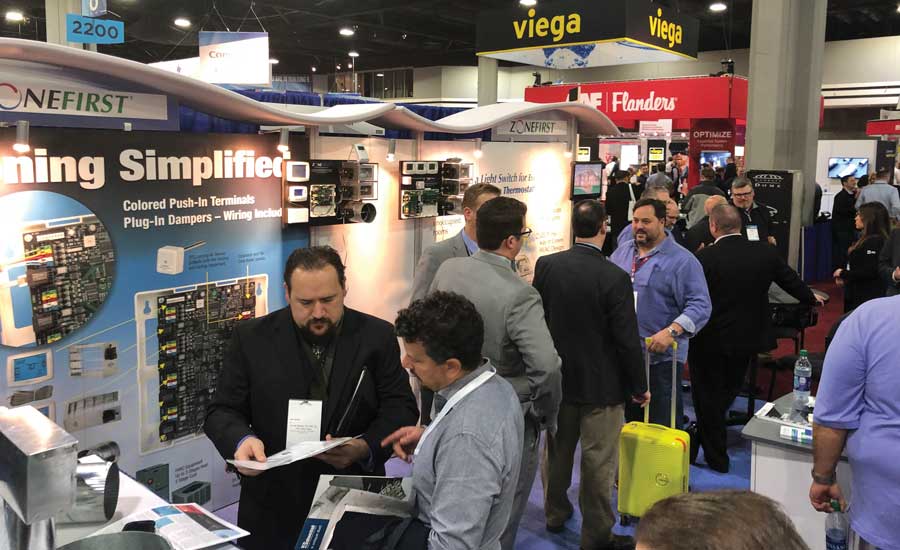 HELLO, THERE: At the expo, ZoneFirst introduced its Multi-size Outlet Damper, which fits into any wall-stack duct or oval-stack outlet box.

At the expo, ZoneFirst introduced its Multi-size Outlet Damper, which fits into any wall-stack duct or oval-stack outlet box. The damper design slides from 8 inches to 14 inches in length and is designed to fit seamlessly behind any wall register and grille. Soon to be offered as a wired model — where the wire can be snaked through the duct to avoid changing batteries — the new outlet damper will virtually last a lifetime, according to the company. This new damper’s design uses a simple swing blade to open like a door, providing a large, free area for maximum airflow and almost no air restriction. Installation is easy by simply removing the existing grille or register, running the wire through the duct, and pulling it out near the plenum to wire. The contractor will then plug the motor into the wire, place the outlet damper into the duct opening, slide the damper to fit over the duct opening, and replace the register.

“This new patent-pending design makes adding zoning to the millions of existing homes more possible than ever,” Foster said. 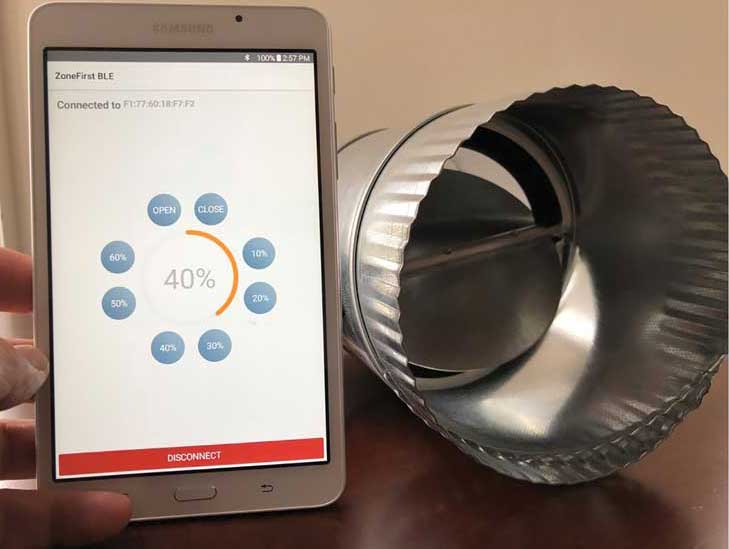 ZoneFirst will have this product available in late spring.

In addition, the manufacturer introduced its new Wireless Zone Dampers and mobile app, which will be available this summer. The wireless feature will be available on all styles of dampers the company offers. The new motor is battery powered and operated via any smartphone or tablet when connected to the damper app. Anyone can control the airflow in a specific room or zone by simply pulling up the app and adjusting the damper to any one of eight preset positions.

Many homeowners and office workers continually complain about the temperature; however, they aren’t near a thermostat and don’t have any control. These new dampers put the power in the palms of their hands.

The wireless dampers can also be put to sleep to extend battery life and be used in place of cable-operated dampers by eliminating running the cable.