Last September, the Environmental Protection Agency (EPA) proposed a new rule that would rescind the provisions regarding maintenance and leak repair to appliances that contained 50 or more pounds of substitute refrigerants such as HFCs. Basically, the proposed rule would roll back parts of Section 608 of its Refrigerant Management Regulations as it applies to HFCs.

The EPA had previously updated Section 608 in November 2016, extending the requirements that had applied only to refrigerants containing an ozone-depleting substance (ODS) to nonexempt substitute refrigerants such as HFCs. Since the Court of Appeals ruled in 2017 that the EPA could not ban HFCs, the agency decided that it also did not have the authority to regulate these refrigerants under Section 608.

Not surprisingly, many are concerned over how these changes could affect the HVACR industry.

If finalized as proposed, the revised Refrigerant Management rule would rescind the leak repair and maintenance requirements for appliances with 50 or more pounds of substitute refrigerants. As such, equipment owners would no longer have to:

Many of these procedures are already considered to be the optimal standard practice, and end users who are focused on operational excellence are likely doing many (or most) of them today, said John Wallace, director of innovation, Emerson Commercial and Residential Solutions.

“These procedures not only benefit the environment but also help ensure HVACR equipment operates at peak efficiency, including at the lowest overall cost,” he said. “One of the benefits of the existing regulations has been to raise the awareness of best practices related to HVACR maintenance. Increased awareness generally leads to broader adoption by those in the industry, regardless of whether regulations are in place.” 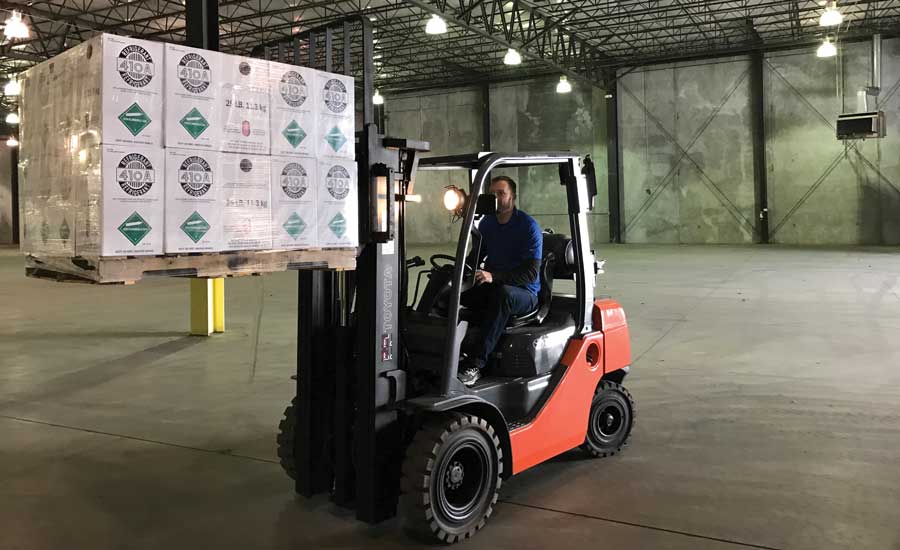 LEGAL AUTHORITY: Dynatemp believes that the EPA has the legal authority to extend refrigerant management to substitutes such as HFCs.

Brad Kivlan, chief executive officer, Dynatemp Intl. Inc., believes the 2016 rule was a reasonable and sensible approach to refrigerant management and that the proposed rule is not a good idea. He argues that such a reversal of EPA policy, which involved significant investments into research and training by the HVACR industry, would be completely arbitrary and capricious and would not withstand judicial scrutiny.

“The 2016 rule on the venting, release, and disposal of alternatives was necessary to clarify the statutory venting prohibition and to carry out EPA’s mandate under Section 608(a) to reduce emissions and maximize recycling of Class I and Class II substances,” he said. “This proposed new rule is not supported by any reasoned factual explanation and would be disruptive to the regulated community. It is Dynatemp’s position that the rule is also unnecessary because the EPA has the legal authority to extend refrigerant management to substitutes.”

Kivlan added that the HVACR industry worked closely with the EPA for two years to craft the November 2016 rules, which added clarity to existing regulations and extended Section 608 to HFCs in a fair, economical, and orderly fashion. He is concerned that past costs involved with the 2016 rule changes are not being considered; that the best practices that have already been established industrywide are working; and that the real costs to change textbooks, training manuals, training programs, and accreditation are very high.

“Our biggest concern, however, is that this proposed rule will be the start of the EPA’s systematic dismantling of all HFC-related Section 608 rules,” said Kivlan. “This rollback will have a negative impact on technician training, as well as the servicing and energy efficiency of HVACR equipment. Rarely does a change at the federal level effect an entire industry, but this rule has the potential to do just that.”

Mark Menzer, director of public affairs, Danfoss, agreed that the proposal could have a negative impact on all segments of the industry as well as end users and the environment. As noted above, the proposal would eliminate many requirements regarding leak inspections and repairs, and while the no-venting requirement for HFCs would remain, it would be nearly impossible to enforce. In addition, he noted that the gradual and predictable phasedown of HFCs will require that reclaimed refrigerant be available for servicing today’s equipment well into the future.

“It is important that the huge inventory of HFC refrigerants in larger commercial and industrial systems covered by Section 608 be protected from being leaked into the atmosphere,” he said. “If these valuable refrigerants are leaked, supply for servicing this equipment will be problematic, resulting in price spikes and forcing users to retire expensive cooling equipment before the end of its useful life, as most of the next generation of refrigerants will not be able to be used in today’s equipment.” 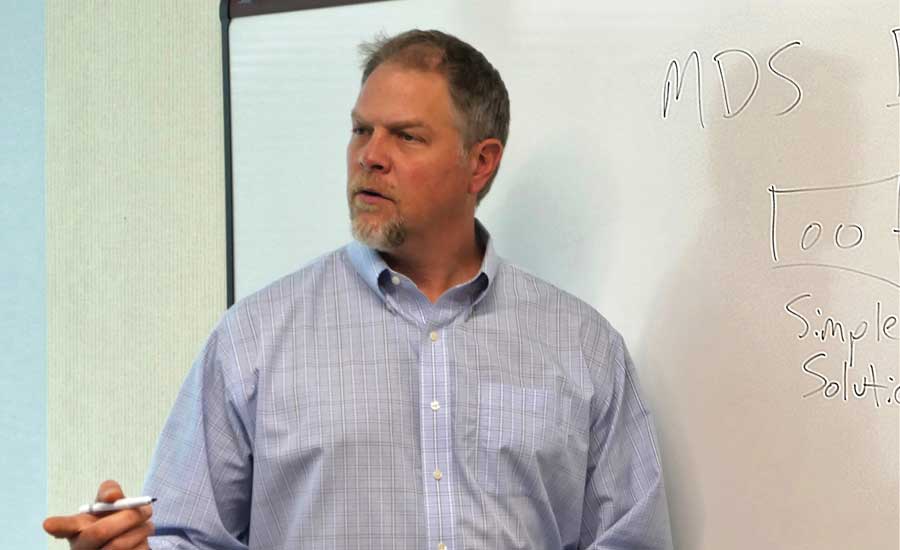 GOOD PRACTICE: Hussmann’s Rich Gilles is keeping an eye on the proposed EPA rule changes, noting that the company supports good refrigerant management practices for all refrigerants, including HFCs.

“We support good refrigerant management practices for all refrigerants, including HFCs, and we will continue to support and partner with our food retail industry customers to ensure all of our solutions meet or exceed regulatory standards,” he said.

One way that Hussmann is helping its customers is by offering equipment that is designed to significantly reduce the risk of refrigerant leaks. For example, the company just introduced a new micro-distributed refrigeration system — microDS — that is self-contained, water-cooled, and hermetically sealed. It is charged with up to 150 grams (5.3 ounces) of propane per circuit for full-size merchandisers and is thoroughly tested and programmed before it is delivered to the customer.

“This all but eliminates the risk of leakage,” said Gilles. “Incidentally, the small charge of 150 grams is 90 to 95 percent less refrigerant than is typically used in systems charged by HFCs, so there are ways to address these issues through refrigeration system architecture.”

In addition to the proposed changes regarding leak repair and maintenance requirements, the EPA is requesting comment on rescinding other provisions that were extended to substitute refrigerants, including the following:

Danfoss strongly believes that these rules — particularly the ones stating that technicians need to be Section 608 certified and that recovered refrigerant be reclaimed to a purity standard before it can be resold — must remain intact for HFCs and other substitutes.

“Many of the substitute refrigerants will be at least mildly flammable, and while 608 certification does not guarantee that the technician is fully qualified to handle flammable refrigerants, it could help to keep them out of the hands of DIY’ers [do-it-yourself’ers] and others who might be inexperienced in how to use them safely,” said Menzer. “If the reclaim mandate is rescinded, users will not have the assurance that the refrigerant being used to service equipment is of recommended purity.”

“If states enact regulations individually, regulations could potentially vary widely from state to state. This could create problems for the industry and lead to a patchwork of inconsistent regulations that would be challenging for manufacturers and service providers to navigate.”
— John Wallace director of innovation Emerson Commercial and Residential Solutions

Wallace agreed, noting that rescinding the reclaim requirement could allow reclaimed refrigerants that contain impurities to be utilized in equipment, which may lead to premature failures and increased maintenance costs for owners of HVACR equipment.

“One benefit of certification is that wholesalers are able to sell refrigerants to technicians who have a sufficient background and understanding of their liability under the Clean Air Act,” he said.

As for recovery equipment, one of the main reasons that the current evacuation of HFCs is so successful is due to the Air-Conditioning, Heating and Refrigeration Institute (AHRI)-certified refrigerant recovery equipment and the federal EPA’s role in mandating certified recovery equipment’s use, said Kivlan. If the rule is rescinded, there will be no oversight into technicians’ use of certified equipment, which could affect the reclamation process and potentially create a safety issue.

Should the EPA decide to move forward and accept the new proposals regarding HFC leak repair, handling, and purchase, individual states will likely step in, which may create more headaches for the industry.

“We are already seeing some states such as California enact regulations that adopt many of the requirements in Section 608,” said Wallace. “If states enact regulations individually, regulations could potentially vary widely from state to state. This could create problems for the industry and lead to a patchwork of inconsistent regulations that would be challenging for manufacturers and service providers to navigate.”

The EPA conducted several public meetings last fall to gather feedback from the public regarding the proposed changes. The agency anticipates issuing a new rule addressing HFCs in early 2019.