This website requires certain cookies to work and uses other cookies to help you have the best experience. By visiting this website, certain cookies have already been set, which you may delete and block. By closing this message or continuing to use our site, you agree to the use of cookies. Visit our updated privacy and cookie policy to learn more.
Home » From Their Feet to Their Fleets, HVAC Contractors Prepare for Winter
HVAC Residential MarketHVAC Light Commercial MarketHVAC Commercial Market

From Their Feet to Their Fleets, HVAC Contractors Prepare for Winter

The autumn leaves displayed their dazzling colors and have fallen to the ground, while the first hints of frost cover the grass. We all know winter is on its way. And HVAC contractors — who brave all types of weather conditions — are using this time to prepare their field technicians and installers for cold weather and the ice, sleet, and snow that come with it. Most people worry more about extreme heat and heat exhaustion, but the cold comes with its own set of dangers, such as hypothermia and frostbite. In fact, according to a report from the Centers for Disease Control and Prevention (CDC) analyzing deaths from U.S. weather events between 2006 and 2010, cold weather is responsible for the majority of weather-related fatalities.

This winter looks to be a bit different from what the country experienced during the last winter season, noted Paul Pastelok, senior meteorologist for AccuWeather.

“Last year, it ended up being colder across the Northern Rockies and plains, but this year, we think it’s going to be a littler warmer and milder there,” Pastelok said. “Meanwhile, the Southeast, Carolinas, and mid-Atlantic states could be a little colder than it was last year.”

Overall, Pastelok predicted a period of more extreme cold but over a shorter duration of the winter season.

“We’re expecting the second half could be the coldest part of the season — late January into February,” he said. “And it could cover a third, maybe close to the entire eastern half of the country.”

As far as the wet weather goes, Pastelok predicted a very active Southern storm track, especially in January and early February. The eastern areas of the Northeast could see slightly above average snowfall. Additionally, the snow on the ground could intensify the cold that comes later in the season in those areas, Pastelok noted.

“There will be a lack of snow, we feel — at least compared to normal — in the middle of the country, near the Great Lakes,” he said. “It could be a weaker lake-effect season, so it may not get quite as cold from time to time there. The snow will be modest in the north-central Rockies. And January could be a pretty active month in central and northern California.”

The southern part of the country will see a colder, more active winter than usual, Pastelok predicted.

“What’s going to happen is, as storms go across the south, there will be a pull down of cold air from the north that comes shooting into the lower valley of Texas and southeast Texas,” he said. “They’re going to see more freezing temperatures in areas that don’t typically get freezing temperatures. That will include places like Arkansas, eastern Oklahoma, and southern Missouri. We also have a couple of ice events in our forecast based on past years for that area as well.

“They’re going to see more heating use compared to the norm across the South — around Gulf Coast states into the Carolinas,” Pastelok added. “The early part of the winter may see less heating used in the upper Midwest and Great Lakes because the nights may not be quite as cold as they should be for that time of the year.”

HAVING THE RIGHT EQUIPMENT

No matter what the winter weather brings, it’s important for HVAC contractors to have the right type of equipment while in the field. Of course, the right equipment includes the right tools and parts for service calls, but it also includes gloves, hats, jackets, and proper footwear to keep the cold at bay. 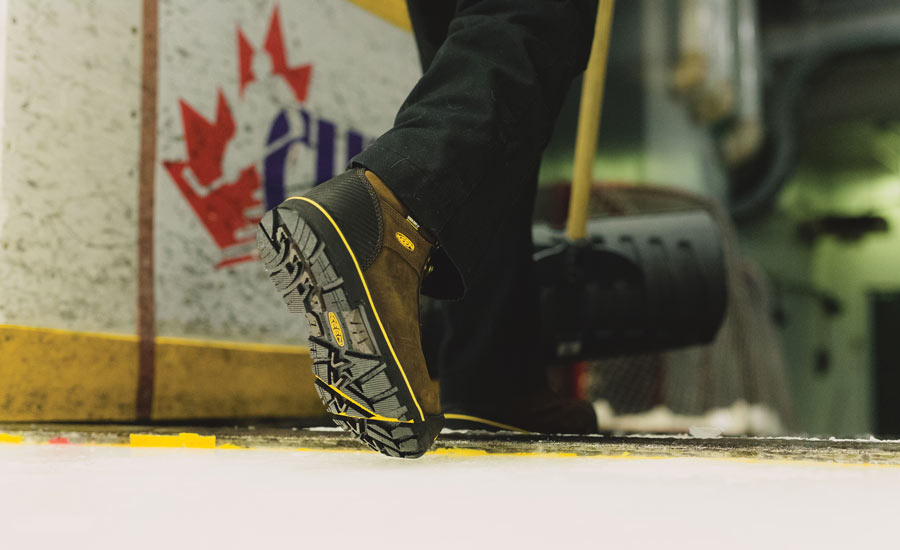 “For HVAC contractors, it’s time to brace for the onslaught of heating repairs and last-minute installations when most calls start switching from cooling requests to heating ones,” said Robin Skillings, director of global marketing for Keen Utility. “Footwear is important because the job becomes all about time spent working the job, staying comfortable, and delivering heat to the customer as quickly as possible. When the job requires going outside — be that on a rooftop to access equipment or back and forth to the truck for parts — maintaining traction and stability is a top safety concern.”

Footwear is an important choice for extreme weather conditions, and a grippy, lugged rubber outsole will offer more traction in snow and mud but also offer breathability, Skillings said.

“The HVAC pro knows heat and cold — and sometimes, when a system malfunctions, it makes the job site an even tougher place to be, so it’s important that the work boot is built for grip and traction outdoors but can easily transition back into indoor work,” he said. “This way, an already warm foot doesn’t get any hotter or sweaty. Working in HVAC also means working in tight, awkward locations; hauling heavy equipment; and dealing with high temperatures when fixing water or heating systems. Again, comfort and traction are key safety factors for winter months.”

“Most importantly, keeping dry on the job is critical, so investing in a pair of waterproof work boots is paramount to personal safety,” Skillings added.

Safety is a huge concern for employees in the field, according to Gaithersburg, Maryland-based GAC Services. The company ensures its technicians and installers have proper clothing, including hats, gloves, and winter scarves. It also provides portable gas heaters for installers to take with them to job sites. 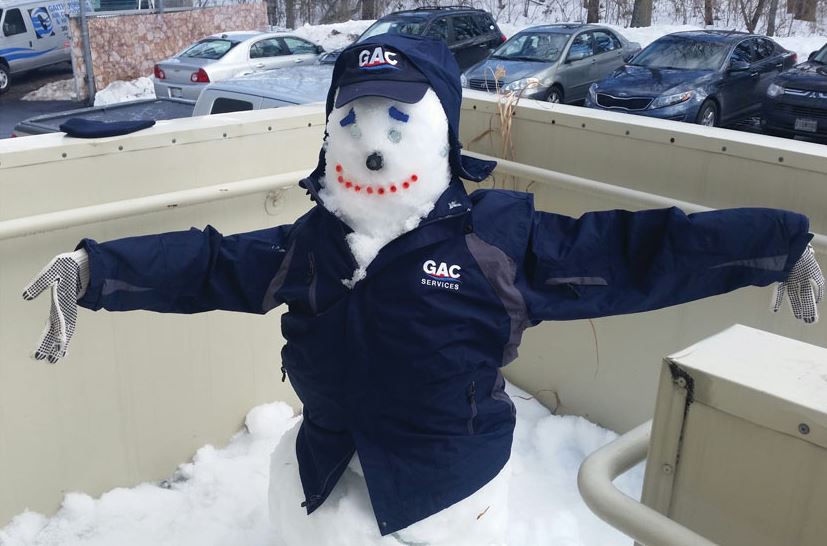 BRRRR: Safety is a huge concern for employees in the field, according to GAC Services in Gaithersburg, Maryland. The company ensures its technicians and installers have proper clothing, including hats, gloves, and winter scarves.

“We try to schedule outside work when the weather isn’t raining, sleeting, or snowing,” said Rich Biava, vice president, GAC Services. “It happens at times, but we try to avoid it.”

Biava said now is the time the company starts outfitting its fleet vehicles — getting them in for tuneups and making sure the tires are up to snuff.

“When it snows, we don’t want to run the vans, but we do have 10 or so 4x4 trucks,” he said. “When we know the weather is going to be bad, we have the technicians trade in the vans with the guys who have these trucks. We also have a couple vehicles with winches on them, so when guys have gotten stuck, we have been able to pull them out.”

Additionally, GAC has several senior technicians, so when a call comes in during a winter storm, the techs can try and talk some of the handier customers through what to check and how to troubleshoot the problem, without having to dispatch a technician.

“We’re not used to big snow blizzards around here, so when we get one, it can take a while before the county comes and plows the streets,” Biava said

According to Michele Perrin, health and safety supervisor at Grand Rapids, Michigan-based Pleune Service Co., the biggest thing is to remind employees that the colder temperatures can affect their bodies, so they need to make sure to take precautions for the weather. Perrin does this by giving them examples of procedures to follow.

“Every week, I send out a ‘Tool Box Talks’ video, and the topic varies depending on the time of year, weather [hot or cold], or what we may have been dealing with in the field over that week, such as fall protection or dehydration.”

As a commercial contractor, Pleune has sometimes had to turn down service calls if the weather is too dangerous for its employees to be out on rooftops, according to Perrin.

“There are a couple ways this can be handled,” she said. “The easiest is for the technicians to refuse to do the work due to a dangerous condition; they know that I and the management team are behind them 100 percent for their own safety. Sometimes, they may call and have me meet them to look at the situation and determine how unsafe it really is. Generally, we can, together, come up with a plan that works for them to work safely. We can refuse to do the work until the owner makes the situation safe. Once the owner fixes the situation, we will return to complete the work at hand.” 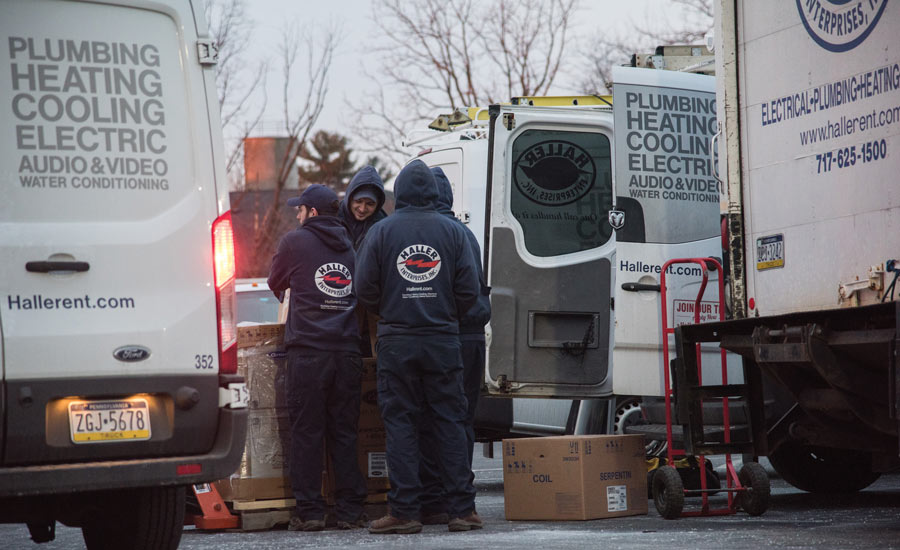 STARTING EARLY: Haller Enterprises in Lititz, Pennsylvania, starts talking about how to protect against cold weather conditions starting in October, according to Edward McFarlane, vice president of learning and development.

Pleune also reminds its employees to be safe in hazardous winter driving conditions, usually via text or email message, urging everyone to be aware of the weather and to slow down for icy and snowy conditions.

Haller Enterprises, located in Lititz, Pennsylvania, starts talking about how to protect against cold weather conditions starting in October, according to Edward McFarlane, vice president of learning and development for the company. The company holds monthly department meetings and weekly Tool Box Talks, and places posters and other materials on job sites.

“We do have snow tires, and some of them [technicians] have snow chains, depending on where they are working,” he said. “We also have a fleet shop staffed with three people. We have our own flatbed truck and 4x4 pickups that can go and help extricate people from slippery situations. If the vehicle is damaged, we send the flatbed out, and the truck goes up on the roller bed, and we bring it back.”

Safety is one of the core values at Haller Enterprises; therefore, the company takes working conditions very seriously. During bad weather, one of Haller’s managers will get up, look at the weather forecast, and then go out and drive the roads. 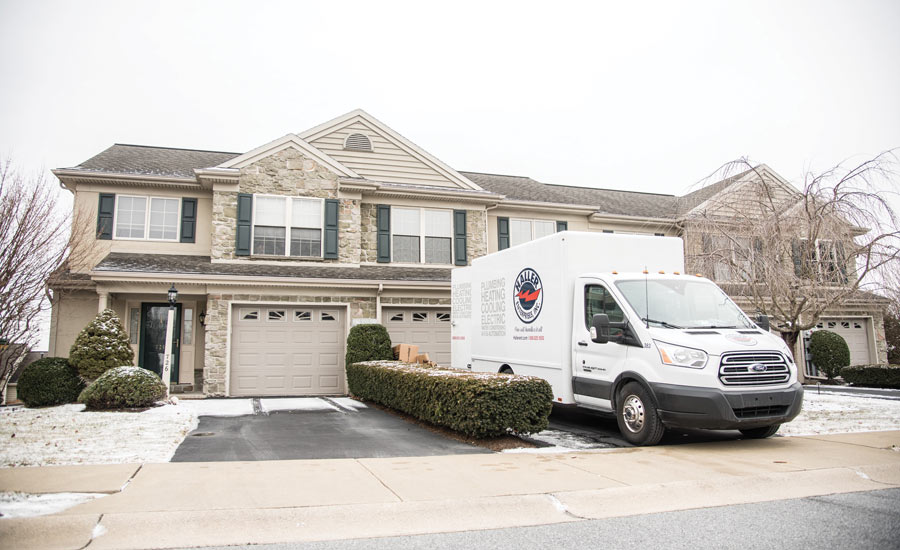 SNOW DAY: During bad weather, one of Haller’s managers will get up, look at the weather forecast, then go out and drive the roads. The company will then use a robo-dial, text message chain, or hotline number that everyone can call to see if work is cancelled for the day or not.

The company will then use a robo-dial, text message chain, or hotline number that everyone can call to see if work is cancelled for the day or not.

Extreme weather is evaluated on a case-by-case basis, McFarlane noted, because the company’s territory is fairly large, so the weather varies in its five locations. Some branches may work, while others may not.

“Ironically, it really comes down to when the storm hits,” McFarlane said. “If it hits on a Saturday, things are usually clear. But if it hits on a Monday morning, that can really put a damper on your productivity. If you lose a day, you lose a day. Nine times out of 10, we’re working as safely and efficiently as we can. So a lot of times, it’s a lost day. That’s the price of safety.”

In Case of Emergency: Contractors Prepare for the Worst