A Meteoric Rise from the Bottom to the Top

Thos. Somerville Co. has been in existence for 150-plus years. Therefore, the company has been around longer than the telephone … Please share a little bit more about the company’s history.

Riley: Thomas Somerville came to the U.S. from Scotland in the 1850s, and after moving south from New York to Baltimore, he eventually established himself in Washington, D.C. In 1861, when faced with the rising cost of living, the 31-year-old Somerville and friend Robert Leitch established a small brass foundry called National Brass Works. It’s funny that you use that reference to the telephone. We have a copy of the 1878 National Telephone exchange hanging on the wall in our headquarters that shows Thos. Somerville listed as number 66. In our conference room, we display a document from 1870 in which U.S. President Ulysses S. Grant named Somerville as Washington, D.C.’s commissioner of police. Eventually, Leitch and Somerville dissolved their partnership in 1873.

Riley: We employ over 400 people in our 21 branch locations and three stand-alone showrooms. We sell to the residential and commercial markets of plumbing, heating, and air conditioning.

You started with Thos. Somerville Co. in 1985 in a temporary/seasonal warehouse position. Please share how you went from a temporary worker to CEO.

Riley: To me, I think it’s pretty crazy that it ever happened. In 1985, I was looking for a summer job between my junior and senior years at George Mason. A former college roommate, who was working in the credit department at Thos. Somerville, told me to go see if they needed help at the Fairfax branch. They hired me immediately to get them caught up on the incoming freight that had piled up in their aisles. I cleared the aisles fairly quickly by getting everything on the shelves and was asked to work the counter the rest of the summer. As I approached the end of my senior year, the Rockville manager — who asked if I would come to work for him — called me. I politely said no thank you. A few weeks passed, and I was still looking for the right job, when the regional manager called and wanted to buy me lunch to discuss the opportunity. I thought, free lunch, OK, I’ll meet you. I turned him down, too. It was about a month later when the manager of Fairfax called me and said, “Why don’t you meet me for lunch and hear what I have to say.” He was quick to cut to the chase. “I know why you don’t want to do this. It’s plumbing and heating supplies, and you’ll be at a party with your buddies and someone will ask you, ‘What you do for a living?’ and you’ll be embarrassed to tell them.” I said, “That’s fairly accurate.” He went on to tell me that he earned an undergraduate degree from Duke and a master’s degree from George Washington, and the reason why he was in this business is because these are products that people will always need, and you can make a lot of money at it. He went on to lay out a path for me to follow from a brief stint inside to my own territory. 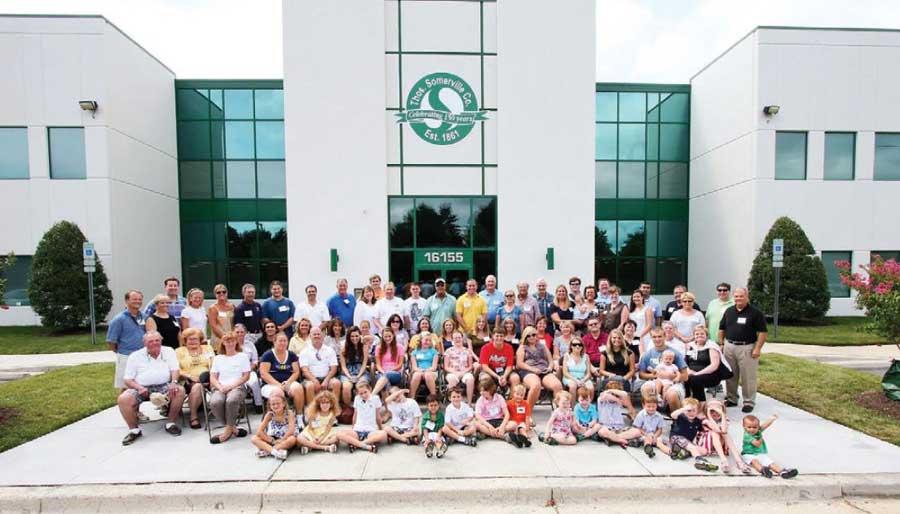 The Thos. Somerville Co. was founded in 1861. Doug Riley started with the company as a temporary worker in 1985. His meteoric rise reached its ceiling in 2015, when he was named CEO and president.

I went on the road about 11 months after my hire and received some high sales honors until the guy who hired me was promoted in July 1991, and I threw my hat in the ring for his job. Upper management was straightforward in telling me they felt it would be difficult to jump into such a large branch and to go from being one of the boys to the boss. The York, Pennsylvania, branch manager took that opening, and I took over York, Pennsylvania, sight unseen. I later got a little cocky and told the regional that if he fired the Lancaster, Pennsylvania, manager, I could manage both and be better than the other guy was by myself. Eventually, I concentrated exclusively on Lancaster. With a fantastic team as well as a move into a larger facility, we built it into a premier location. That led to me taking a regional manager position, then becoming vice president of sales, and eventually transitioning into this role as CEO and president.

And, today, we still fight the same thing that kept me from saying yes originally. It’s just not a very sexy business, which is why it’s important that we tell my story. Not to bring attention to me but to focus on the possibilities this industry affords and to bring attention to what can be accomplished by that 21-year-old graduating senior. During the kickoff to our annual meeting this past year, my focus was on opportunities, because somewhere in that audience was our next CEO, vice president, branch manager, etc.

You became CEO in 2015. What was the first major business decision you made? Did it work out in your favor?

Riley: Buying an old, run-down building in the Harbor East section of Baltimore to open a Kohler Store. As far as the real estate is concerned … it’s been a home run. As for the business, there’s still room for growth.

Thos. Somerville is a family-owned company. To this extent, you guys deploy a family advisory council. Can you tell me a bit more about the purpose of these groups?

Riley: We have a full board of directors for governance and oversight of the company, and I report to them. Our family advisory council (FAC) is where the communication of information to all the shareholders is disseminated. The FAC has sometimes been referred to as the junior board, as it can be the training ground for future board members. From our seven-person board of directors, two are Somerville family members. There are no family members employed by the company.

How has the company progressed over the last three years?

Riley: As a highly competitive person, it pains me to say we’ve been flat. We had an ERP implementation in 2017, which took us off our track for a short time period, but that is behind us now, and we are moving back into an aggressive growth and expansion mode.

What has been the biggest challenge for the company over the last five to 10 years?

Riley: The transfer of knowledge. As a stable, rewarding workplace, we have been blessed with some long-term employees who boast 20, 30, 40, and 50 years. We even have one employee who’s been around for 60 years. These individuals are retiring each and every year. Just merely filling their seats with another person is sometimes tough enough, but trying to retain their overwhelming knowledge at the time the baton is handed off has been a daunting task. It often means we are overstaffed during these important transitions.

On your LinkedIn page, you list your specialties as: “I focus on achieving optimal results through a strategic plan guided by motivation, teamwork, and vision.” Can you expand upon the thought behind that?

Riley: One of my responsibilities is to create a strategic plan for the company and turn that plan into tangible actions that deliver the best possible results. By conveying my vision of where we are headed into a clear road map, we must find ways to rally the team behind that vision and be the very best we can be each and every day.

How is the company dealing with the threat of e-commerce and consumer-direct sales?

We are always looking at how we can improve and change. It’s in our history from how Thos. Somerville evolved from making brass fittings and castings for cannons to where we are today.

You’ve led an extremely successful career in this industry. What’s the secret sauce to success in HVACR distribution?

Riley: As I tell our new hires in our new hire orientation program: Be the best at whatever you do.

What’s one piece of advice you wish you could tell yourself back when you were first getting started?

Riley: You know, that’s a great question. I guess I’d tell myself to slow down and enjoy the ride more. I can’t say I haven’t had fun; there’s been plenty of fun, but I think I rushed through some of it, as I was in pursuit of my next accomplishment. I’ve got two wonderful daughters who are 26 and 28, and although I was very active in their lives, I don’t think I appreciated the time with them enough. I’ve been blessed with another opportunity, as I remarried a few years ago and have a 2-year-old son, and I am slowing down to appreciate him every single day.

What’s one piece of advice you want to tell those reading this article?

Riley: Be present. If you’re on the job, be focused on what you’re doing. If you’re at home spending time with your family, be focused on your loved ones. Put down your cellphone and be present in those moments. Being there physically is not enough. Make sure you’re there mentally, too.

What does the future hold for Thos. Somerville Co.?