Doug Young credits a strong foundation, solid company values, and a great team for the success of Behler-Young Co., an HVACR distributor based in Grand Rapids, Michigan. The company serves Michigan’s Lower Peninsula, the eastern part of the Upper Peninsula, and northwest Ohio.

Behler-Young was founded in 1926 by Doug Young’s grandfather, Wayne (Brig) Young, and John Behler, friends who worked together at a sheet-metal distributor. The company is now owned by 10 members of the Young family and Doug Young represents the third generation to have a leadership role there. His sons, Cameron and Mackenzie, who work for the company, are its fourth generation.

Doug Young has a bachelor’s degree in industrial engineering from the University of Michigan and a master’s of business administration from Carnegie-Mellon University. Before starting at Behler-Young nearly 41 years ago, he worked for an automobile parts manufacturer in a Detroit suburb. He has served on the boards of the Michigan Chamber of Commerce and the Grand Rapids Area Chamber of Commerce, and was the first president of HARDI, the HVACR distributors association.

Distribution Trends recently sat down with Young, in a teleconference, to talk about his success at Behler-Young, his business influences, and what he sees ahead in the industry. The conversation has been edited for clarity and length.

DT: So tell me about that first job at the company.

Young: The company was in a really precarious situation. Interest rates were 20%, inflation was running rampant. We were in the midst of a recession. A lot of our business was residential, new construction, and that business had gone away.

Somebody that I had worked for, summers, had asked me to come back and join the business because they needed some strength in inventory management and operations. So the position that I went into was in the purchasing department as a buyer. But I started doing a lot of different things to try to help manage our inventory, utilize some new tools for inventory management.

Back in the day, boy, when you look at the tools available today, it’s incredible, the technology improvements.

DT: What were you using back then?

Young: We had an IBM System/3. And green-bar paper. When everything was on paper, all the transactional documents — we used to call them tallies — would come in from the branches overnight. And people here would input them into the system to get the transactions loaded in and update the inventory. When you go to real-time transaction processing, what an incredible improvement in information.

DT: You worked somewhere else for a while, at a specialty fastener manufacturer for the auto industry. What was the name of that business?

Young: Multifastener. It was in Redford Township (a Detroit suburb). I used to live in Ann Arbor and drove in. And it was an amazing business.

We believe that our best practice (as a family business) is that family members should work someplace else before they make a decision to come into the family business. So that’s why I spent some time, after I got my MBA, at Multifastener. But, again, the economy was in a recession and Behler-Young needed somebody, and I thought, “You know, I’ve thought about this for a while. I’m going to give it a try.”

DT: At the time you got your degrees, had you considered not working for Behler-Young, or was the plan all along to, at some point, come to the company?

Young: No, on the contrary, I had some incredible job offers. Carnegie Mellon is one of the top MBA schools in the country and I had many different opportunities. One of them that I was considering was to be on the finance staff at Ford Motor Co. So another Detroit area business.

Yeah, I had a number of different opportunities and it was interesting.

DT: Tell me how Behler-Young has been able to weather the challenging times.

Young: An incredible team of people. And our leadership team is excellent.

We have a great set of core values we use every day to guide us. We have a good sense of our future direction, through EOS (entrepreneurial operating system) traction, organizational system. We ask good questions and then listen well to our team, our customers, our product vendors, and our service providers. 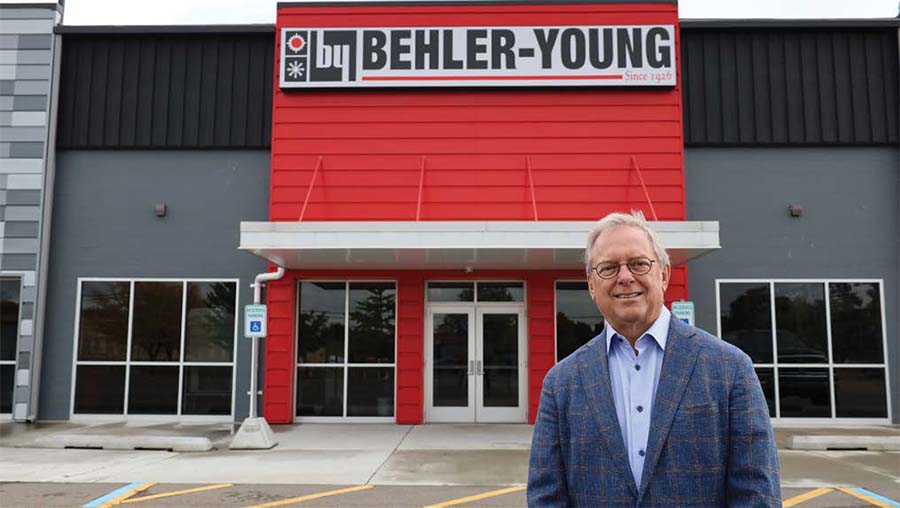 NO “I” IN TEAM: CEO Doug Young is quick to credit his team of employees for the success of the Behler-Young Co., a Michigan-based HVACR distributor. (Courtesy of Behler-Young Co.)

“There is an increased use of technology. And I see that that’s just going to accelerate — that we’ve got to embrace that change or it’s going to bypass us.”
-Doug Young
CEO, Behler-Young Co.

Young: Even though we’re in the midst of some economic challenges, some say that we have more challenges to come ahead of us in the five-plus years from now. And what our position is, is that we have to be prepared, we’ve got to be strong financially, we have to reduce our debt. We’ve got to use technology in our business.

There is an increased use of technology. And I see that that’s just going to accelerate — that we’ve got to embrace that change or it’s going to bypass us.

The number of people retiring in our industry will continue. And therefore we’ve got to hire team members with the right attitude and alignment with our core values. Then we teach them what they need to know. As I said earlier, if you have a great team and great leadership, you can get through most any situation. We will be prepared.

DT: So who would you say, in the business world, outside of HVAC, has influenced you the most?

Young: Several Bible study leaders have been very helpful to me.

I’m also a part of a group called YPO, Young Presidents Organization — a forum of other business leaders that I have been associated with for 28 years now. We meet maybe four or five times a year, and we are kind of advisors to one another. That has been incredibly valuable to me.

DT: Tell me about the worst business advice you’ve ever been given.

Young: I went to a couple of good educational institutions and I would say that there were some people there that were thinking, “I’m going to educate you so that you can take care of yourself and that you don’t need others.” And I think that was absolutely horrible advice. I think most everything that I’ve accomplished, I’ve been part of a team and have had the wisdom of people that came before me or had experienced things, that I could utilize that advice.

DT: OK. And how about the best business advice?

Young: I think asking thoughtful questions. And then, what so many people in leadership positions don’t do: After you ask a question, you need to shut up and listen. God gave us two ears and one mouth for a reason.

We counsel our sales territory managers with this advice. Your customers will tell you what they need if you give them a chance.

DT: So what would be your fantasy career, if you weren’t running a distribution company, however realistic or unrealistic?

Young: I’ve been told that I might make a good teacher. I do mentoring with young people in the business arena through a couple of different organizations. I think maybe a career along that line — or a life coach.

But I actually think I’m fulfilling my fantasy right now. I could not be happier or prouder than to be right where I am today assisting our team, our leadership, and my two fourth-generation sons, lead our 97-year-old-business.