Whew … the summer of 2018 was a scorcher. In fact, 2018 is on pace to be the fourth hottest year on record, according to data from the National Oceanic and Atmospheric Administration (NOAA). The three years that have been hotter were 2015, 2016, and 2017. However, it’s not all fun in the sun, as heat is the leading weather-related killer in the U.S., according to the U.S. Environmental Protection Agency (EPA).

People exposed to extreme heat can suffer from potentially deadly illnesses, such as heat exhaustion and heat stroke. Hot temperatures can also contribute to deaths from heart attacks, strokes, and other forms of cardiovascular disease, per the EPA. Additionally, certain population groups face higher risks of heat-related death, including adults aged 65 and older; children, as their bodies are less able to adapt to heat than adults; and people with cardiovascular and respiratory illnesses.

Air conditioning can provide relief from the heat and save lives. A 2012 study published in the Journal of Political Economy found that the installation of air conditioning in American homes is the reason why the chances of dying on an extremely hot day fell 80 percent over the past half-century.

Due to that fact, many medical professionals nowadays are advocating that the temperature of where newborns and infants sleep be kept between 68° and 72°F in order to prevent overheating and sudden infant death syndrome (SIDS). Many homeowners facing other chronic health issues also prefer to keep their homes within those temperature ranges for optimal health and comfort.

This, of course, can become problematic for both new and aging HVAC systems. According to Bryan Orr, co-founder and vice president of service, Kalos Services Inc., Clermont, Florida, and founder of HVACRSchool.com, systems should be set at 78° or higher in order to increase energy efficiency and system longevity. 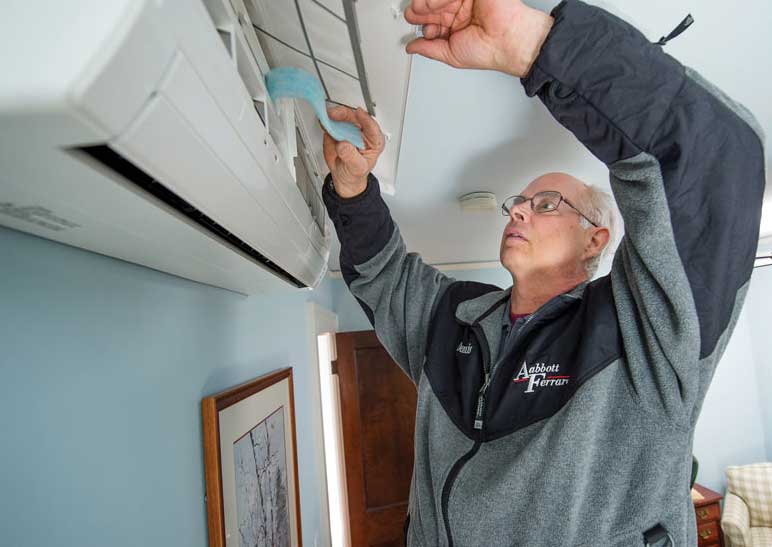 REUSABLE FILTER: In Minneapolis, an Abbott Ferraro technician sets the washable filter in place as the final stage of this Fujitsu heat pump installation. PHOTO COURTESY OF FUJITSU GENERAL AMERICA

“Whenever a typical residential HVAC system is set below 72° — and gets there — it gets into the zone where freezing becomes possible,” Orr explained. “This is because the typical evaporator coil split is 35° below the indoor air dry bulb temperature at 400 cfm per ton of airflow. This means that when the indoor temp is 70°, the typical system, with proper airflow, has a 35° evaporator coil, which is dangerously close to freezing.”

Additionally, setting a system down low in a humid climate often will mean the indoor air temperature will be below the outdoor dew point, which can lead to fogging windows and possible moisture condensation in the walls, depending on the wall construction and location of vapor barriers, Orr noted.

“These are just a few reasons why driving an entire home down to these temperatures isn’t advised, in addition to the fact that most won’t make it there anyway, plus the hefty power bill,” he said.

“The best way to accomplish these low temps in the nursery [or bedroom] would be to add in a ductless unit for that room alone,” he said. “I would suggest adding an in-room purifier as well for better air filtration, such as the Air Oasis iAdapt Air. I speak from personal experience because I installed a ductless unit in my bedroom and got an iAdapt so that I can keep my room at 69° when I sleep without having issues with high power consumption or whole-home oversizing.”

NOT A NEW REQUEST

Rob Minnick, owner, Minnick’s Inc., Laurel, Maryland, has had several customers request their systems be able to condition their homes at those temperatures. 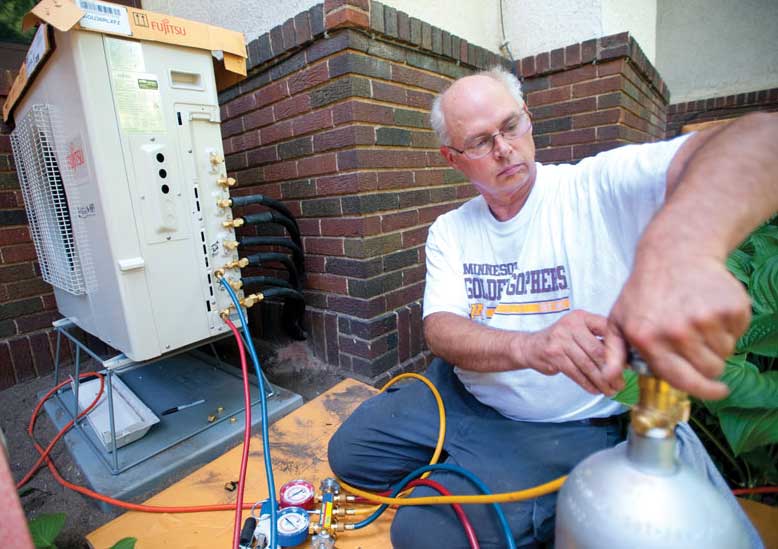 “It can be a problem because the unit runs longer, which, if it’s old, can cause issues to happen to the components sooner rather than later,” Minnick said.

Solving humidity issues will go a long way toward solving this issue for customers, Minnick noted.

“If the house humidity is between 45 to 50 percent, 75° degrees will feel like 68 to 72° to most people,” Minnick explained. “Fix infiltration issues first. Confirm there is not an excessive air change concern first. Then confirm the size of the system is correct doing a proper Manual J with all the correct inputs, including the infiltration blower door number. Then confirm the ducts are sized correctly for the system that is required, in short per ACCA QI5. This has solved the problem 99 percent of the time for us.”

“Both were in-home hospice situations where the family wanted to keep one person much cooler than the rest of the home,” Morgan said. “We also had a third similar request where a homeowner had a room with many servers and monitors in his home that had so much heat gain, the room was uncomfortable, and the equipment was getting too hot. In each of these situations, we started by running load calculations with the desired indoor temperature as our design temp. We then removed the room from the rest of the central air system it was on and redesigned the ductwork to accommodate the change. Once the room was isolated from the rest of the home, we installed Mitsubishi ductless equipment with a variable-speed inverter compressor. This assured the unit was not grossly oversized when the heat load was lower as the ambient temperature dropped.”

If the homeowner had requested to keep the entire home or multiple rooms at the lower temperature, Magic Touch would have done something similar, but using a multi-zone ductless system, eliminating the central air conditioning system entirely, according to Morgan.

Magic Touch is located in the Phoenix area, where the climate is extremely hot in the summer and relatively mild in the winter. So the company doesn’t have the extreme cold to design around when installing ductless systems.

“This solution may not be the best answer in dissimilar climates; however, considering there are ductless heat pumps that can operate in temperatures as low as minus 13°, I’m willing to bet this would work in many areas,” Morgan noted.

The other thing the company does in this scenario is conduct a home energy audit.

“We want to make sure other systems in the home, such as insulation, building tightness, windows, and shading, etc., are optimized, allowing us to utilize less capacity to achieve the desired set point,” he said.

“The best thing a contractor can do is educate their customer in how the different types of compressor technologies work, load calculations, the problems associated with oversizing equipment, and the costs involved with running oversized central air conditioning equipment,” he said.

Many of Plano, Texas-based Total Air & Heat Co.’s customers prefer to keep their homes between 68° and 72° whether they have infants or not, according to Steve Lauten, president of the company.

“Most people sleep better at those temperatures, and we do have customers with infants looking for these temperatures,” he said. “Therefore, we handle those requirements the same for everybody.

“Oversizing an a/c system to get to 30° below ambient temperature is going to cause the system, at some point, to short cycle, which means my humidity levels are going to creep up.”
— Chris Crawford service manager Vanderford Air Inc. League City, Texas

“The challenge revolves around the temperature of the cooling coil,” Lauten continued. “Icing can occur on the coil because the refrigerant temperature is below freezing in some cases. In particular, if the duct system is not sized correctly, the airflow can be lower than design airflow. Since having the ducts sized properly is important, we do a Manual D calculation to ensure the ducts are sized correctly. Many times, we add a coil freeze temperature sensor, which is fairly easy and that works by cycling the compressor off to prevent icing. This is the lowest-cost fix. Another aspect to consider is the design of the structure. Looser structures have higher infiltration, which brings in more humidity.”

Lauten recommends variable capacity systems to his customers, which can vary both indoor and outdoor fan speeds to deal with lower temperatures.

“System sizing needs to be considered to achieve these goals,” Lauten said. “In most cases, that means a larger system may be needed. We insist on variable-capacity systems in these cases, so we don’t encounter comfort problems due to oversizing. It should also be mentioned that some existing systems may not be able to achieve lower temperatures due to size, age, or system static pressure.”

“Basically, you turn the system on, and it’s never going to achieve that temperature,” he said. “If you have a 10 to 15 year old air conditioner outside, it’s going to have to run forever to get the temperature down to that level, then it’s going to have to run a lot to maintain it. So you’re overworking your existing a/c system. Your energy bills are going to be extravagant, and to be honest, the system is not very efficient. It will wear your system out in a heartbeat.

“Even with a newer system, the only way to do it is to over air condition the space, but then you run into humidity issues,” Crawford continued. “So then you have to address that. You can do that with a stand-alone dehumidifier. The new systems can hit those temperatures, but you have to overengineer it and overdesign it. Every manufacturer will tell you their systems are designed to run 20° below ambient temperature outside. You can design it to get to 25°, but you have to overengineer, oversize the unit for the conditioned space.”

Many contractors try to address the problem by oversizing the system to reach the 68° set point, Crawford noted. But oversizing comes with its own set of issues.

“Oversizing an a/c system to get to 30° below ambient temperature is going to cause the system, at some point, to short cycle, which means my humidity levels are going to creep up,” he said. “So I have to put in an ERV [energy recovery ventilator] or dehumidifier to supplement removal of humidity in the atmosphere. Additionally, if it’s a retrofit system and I’m pulling out a 4-ton system to install a 5-ton system, I’m also not going to have the properly sized ductwork in place to handle the amount of cfm airflow that needs to go through those ducts. So I may end up having to change the ductwork as well. Oversizing is not something we would want to do. If we needed to get a home 25° to 30° below ambient, I would suggest we figure out what two or three areas we’re trying to achieve that in, and let’s supplement our existing system with ductless system instead. It’s the easiest and least expensive way of doing it.”