This website requires certain cookies to work and uses other cookies to help you have the best experience. By visiting this website, certain cookies have already been set, which you may delete and block. By closing this message or continuing to use our site, you agree to the use of cookies. Visit our updated privacy and cookie policy to learn more.
Home » Training in as Little as Nine Days Has Technicians Ready to Enter the HVAC Workforce
NewsTraining and Education for Contractors

As most readers of The NEWS are well aware, the training required to become a proficient HVAC technician is not easy or for the faint of heart. Most of the contractors in this industry have spent years refining their technical and mental skill sets, constantly learning from those around them and enhancing their knowledge of HVAC at every available opportunity.

Traditionally, the initial training required of aspiring technicians takes months at a school — technical, vocational, or otherwise — and then techs ride along with veterans to learn on the job during an apprenticeship of sorts.

While that avenue will continue to be the main path into HVAC, the realities of the technician shortage and the lack of qualified talent yearning to enter the industry have put a spotlight on other training paths, including fast-track training.

THE ROOTS OF FAST- TRACK TRAINING

While the exact length of these programs varies, the idea behind fast-track HVAC training is to take students through an accelerated training program in both the classroom and a hands-on laboratory, usually within just a few weeks.

Joe Cunningham founded the Technical Arts Center (TAC) in Houston in 2016 because, as he put it, he realized that one of the leading causes of concern for the future of both the HVAC and plumbing businesses is the lack of qualified field technicians available and the prospect of finding even fewer in the future. 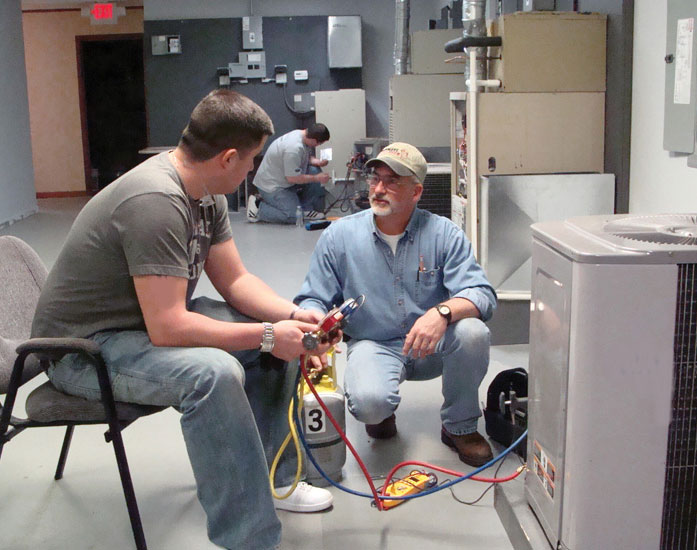 GET IN THE LAB: Supporters of accelerated training tout increased time in the lab as one of the program’s biggest benefits.

“In 15 years, the current generation will be mostly retired,” said Cunningham. “I wanted to revitalize and recreate a previous program that I had worked on but make it better, and that’s where I came up with the Fast Track training program that I am doing now at TAC.”

Cunningham touted the influence of another fast-track training program, the Ultimate Technical Academy in North Little Rock, Arkansas. There, Mark and Pat Hardwick have been conducting fast-track training since 2003 (starting in St. Louis and moving to Arkansas in 2006).

“My first training program I offered nationwide was all the way back in 1991,” said Mark Hardwick. “We started fast-track training in-house and then it ended up getting into a national contracting group in the ‘90s. We started UTA in 2003 to get back to the grassroots and focus on contractors.”

Hardwick saw the need for this type of training out in the field and within his own company, so he developed it.

“The way we see everything happening is that we work with contractors, so we do fast-track training, and all of our clients are contractors,” he said. “We deal 100 percent on that side of the equation. When they come to us, we offer them years of knowledge with this type of training, and the contractor now knows there are avenues to hire a green person that don’t require months and years of study. They know they can hire talent with good work ethics, communication, and who know how to handle a wrench. These mechanically inclined people come to us after the contractor has had them in the field for a bit, working with others, and getting associated with the field.”

Even with such an abridged training schedule, not all fast-track training programs are conducted in exactly the same fashion.

Ultimate Technical Academy has courses in three different modules: HVAC/electrical; air conditioning/heat pump, which covers the refrigerant side; and gas heating. Those are the three core programs, and each is a one-week course of its own. 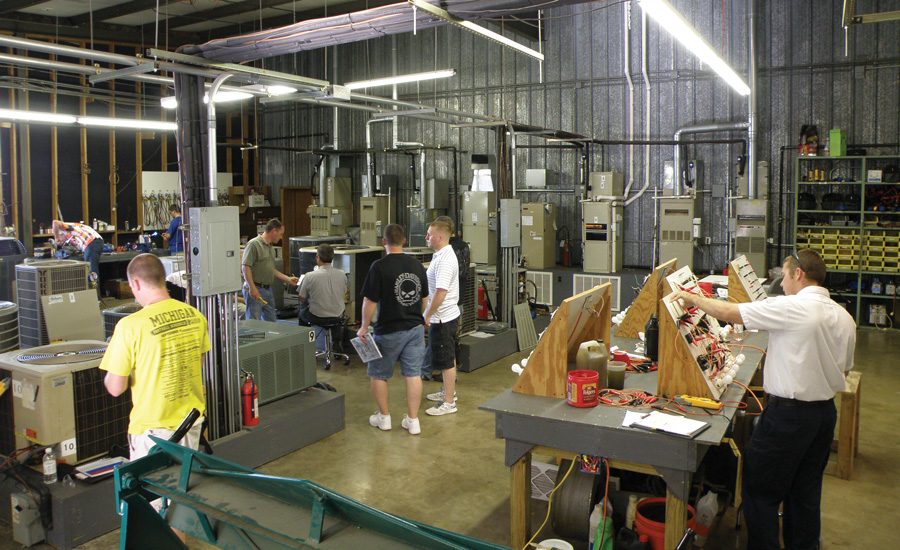 “When we started in 2003, we thought this was the right way to approach training,” said Hardwick. “Be it because of seasonal issues, locational issues, and such. Someone in south Florida doesn’t need to know about gas heating, and someone from up north doesn’t generally need to know about heat pumps, so we have courses by topic. And not everyone can be gone for three to four weeks at a time. That’s a tough time commitment. Our program is built on one-week modules for that reason. We have students who don’t have to take them all at once. Many take just two at a time and come back later for the third module.”

Pat Hardwick detailed how mornings are spent in the classroom while afternoons are spent entirely in the lab, which features 40-50 systems.

“It’s operational equipment, so they are working on equipment with faults built in that allow them to work at different levels,” she said. “We run a class every week, but sometimes we have two or three classes going on at the same time. This allows them to pick and choose on a timeframe when they can come.”

AT TAC, the center’s nine-day HVAC class serves as a preliminary course, designed to take a student without any previous mechanical knowledge and teach them the basics required to succeed as an HVACR technician.

According to Cunningham, since it is necessary to obtain an Environmental Protection Agency (EPA) certification to work in the HVACR industry, this program covers the needed information to secure that certification as well as general information that students can build upon to reach their career goals in the heating and cooling industries.

After completing the short program, TAC graduates are ready to perform maintenance duties. 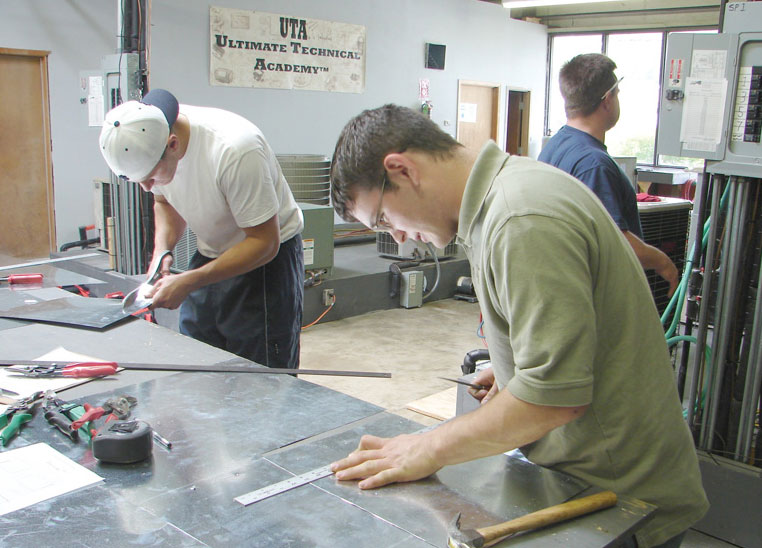 The same sentiment was shared by Mark Hardwick, who detailed a recent conversation with a contractor who said the students he sent to UTA had more hands-on training in two weeks than they had in a year of training at a vocational school.

“There are great vo-tech schools out there, don’t get me wrong, but they are not widespread enough and lack the hands-on training,” said Mark Hardwick. “We cut through the bull and get them straight to what they need to know.”

Dustin Miller, a contractor with Comfort Now Inc., Visalia, California, said he recently hired a new tech with no HVAC experience and sent him to the fast-track program at TAC.

“We have always struggled finding technicians with our growing business, and the experienced technicians we could find had been disappointing,” he said. “We decided to try to hire someone who had good mechanical aptitude and great communication skills and teach them the technical side. The TAC was a perfect match. We sent a new hire to them that had no air conditioning experience, and he came back with hands-on experience and good, sound knowledge of HVAC. It was the crash course we were looking for. The best part of the training is that it’s only nine days, and your technician comes back with the skills needed to be a professional in this industry.”

Another student who went through this program was Julia Shreder, who went on to work for John’s Refrigeration in Mesa, Arizona.

“The class was a great springboard for me, covering all the basic principles of heating and cooling,” said Shreder. “They gave me a crash course and put everything on the table. I learned how these system components work together, got a working knowledge of the field’s terminology, and grasped basic electric repair and service. They also prepared me to legally work with refrigerant, so I could pass my EPA certification. There was no fluff. At the end, I was ready to immediately go into the field.”

Mark Hardwick said the key to a fast-track training program is the capacity to take people at any level of ability.

“We can do that because we work on an individual level with each student,” he said.

“We have been able to change a lot of people’s outlook and future,” he continued. “I think the labor shortage is going to get worse before it gets better, and we can’t get all the training out of the vo-tech schools that we need. The industry is growing, people are retiring, and it’s a problem that isn’t going away. Fast-track training will always have naysayers, guys that scoff at it because it took them four years to learn their skills and get angry at our program, thinking it is a waste of time, but we have a track record of crafting high-quality technicians. We can’t teach everybody the entire business in a week — that actually would be crazy — but we can take what a person has and really build on it.”

Even if a prospective student has little mechanical aptitude, Hardwick and his team will work with them to get them ready for the field; it just might take a little longer to do so.

“Ten years ago, students would come through, and we could count on them having general hands-on abilities,” he said. “That’s not as true as it used to be. It’s one thing to teach the trade to a mechanic, but it’s another thing to teach it to somebody who has never had a wrench in their hand. I think contractors, whether they do fast-track training or not, when they hire new people, they have to consider that there is almost a double jump they have to be working with. They hire somebody and have to teach them about air conditioning but also can’t just count on them having had a wrench in their hand before.”

Cunningham, touting the merits of his program, put it this way:

Nick is responsible for posting online exclusive content including Extra Edition, Breaking News, Manufacturer Reports, and more; producing the eNewsletter; and contributing to the print edition. He holds a bachelor's degree in Online Journalism from Central Michigan University.