There’s a petite, young woman currently planning a wedding and raising a young daughter in the Indianapolis area while simultaneously recruiting women into the sheet metal industry. Catie Rogers, an apprentice for the International Sheet Metal, Air, Rail, and Transportation (SMART) Local No. 20, is due to graduate May 22. But just because she is graduating, it doesn’t mean her passion is fleeting — if anything, it’s just heating up.

Rogers is known to recruit around town at her favorite local spots when she witnesses women with a hard work ethic who have what it takes to be successful in the trades. Her passion to recruit began when she herself entered the trades in 2013 and had no women to confide in or look up to. It was then that Rogers recognized her calling — recruiting.

“So, I totally did not start recruiting girls initially,” she said. “Rumors were circling that I just wanted attention. I solely started talking to girls because there was nobody else like me; there was nobody to talk female things with. So if I saw a girl at Applebees, for example, handling her business and being positive, I’d say, ‘Hey, have you heard about our sheet metal workers?’ I totally only got into it not because there was a need for women in the trades — I just didn’t see anybody like me.”

Since then, Rogers has joined numerous organizations, such as Oregon Tradeswomen and Chicago Women in Trades, and she volunteers as a cast member for Built to Succeed — a group created to increase awareness, education, and recruiting opportunities for the building trades.

Rogers didn’t always know that a career in the trades was for her. She attended a high school in an impoverished area in Indianapolis that had limited extracurricular programs. They did, however, offer a welding program, and that’s where Rogers got the itch. 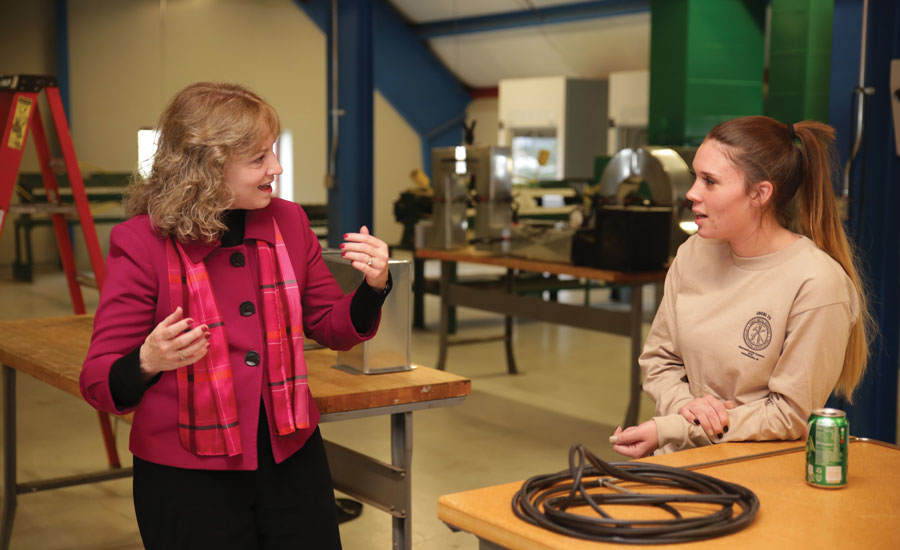 “When I took that class, I fell in love with it,” she said. “Both of my uncles are sheet metal workers, but I didn’t know anything about that through them. But when I told them, they didn’t want me to get into it. They told me they would pay me not to go into it. Me being as stubborn as I am, I took that as a challenge. My welding teacher pointed me in the right direction of the union. I did my research, and I saw that you can go into sheet metal, and they will pay you to do so — there is no student debt. So, I decided this is what I am going to do, and if I hate it in five years, I can do something else.”

“People were making bets on when I would quit,” she said. “But I am stubborn, so I said, ‘Watch me.’”

Rogers realized she had nobody to relate to in the industry. She wanted to spread the word to other women looking for stable work. Her first step was crafting pamphlets that included her contact information and the qualifications to become an apprentice. She included the pay rate for each year as an apprentice — accounting for raises every six months — which she said is a determining factor for a lot of women. In addition, she included information from organizations in the industry and quizzes and instructions on how to read a tape measurer, a skill she feels every woman needs to learn first.

“When I first started doing this, I would get feedback,” she said. “The girls were like, ‘I want to start learning stuff now. What’s the most menial thing I can do?’ I told them any trade you get into, you have to be able to learn how to use a tape measurer. So, that’s a good starting point.”

Since creating packets, her efforts have developed, and people are praising her passion for the trades. 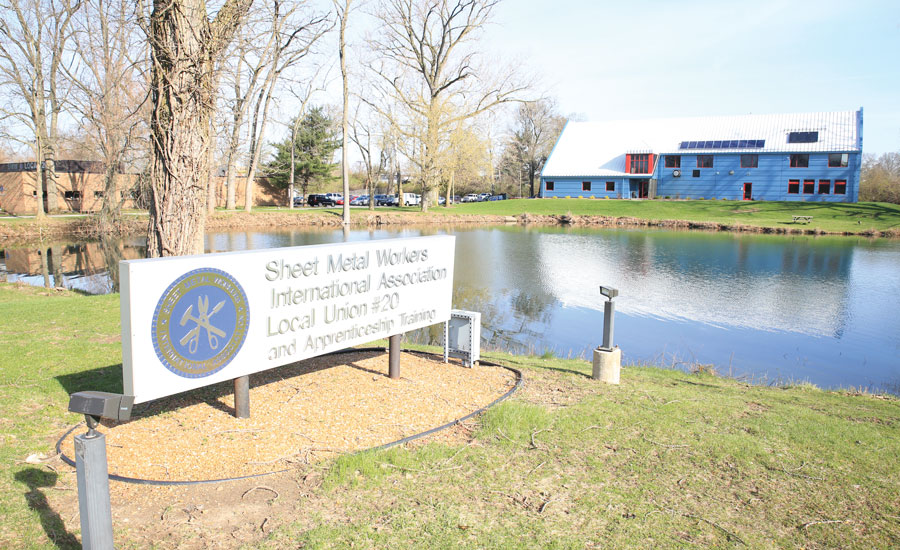 LOCAL NO. 20: Catie Rogers is a current apprentice for the International Sheet Metal, Air, Rail, and Transportation (SMART) Local No. 20 in Indianapolis, where she is due to graduate May 22.

“Well, I am very excited for her to work on that project of continuing to recruit more women into the trades,” said Joseph Landsell, immediate past president of Sheet Metal and Air Conditioning Contractors’ Association (SMACNA) and president of Poynter Sheet Metal in Indianapolis. “I think she has a lot of passion for the industry and getting women into the trades. We need people like her taking charge and leading the movement.”

Rogers now conducts tours of sheet metal training centers and facilities to give women a better idea of the industry they will be entering, should they remain interested.

“What I do is I wait until I have three or four girls to take on tours,” she said. “I basically just answer any questions they have and show them around the training center when there is nobody there, so as not to intimidate them initially. Then, later, I take them to Poynter Sheet Metal, and I do it when all the guys are there working, so they get an idea of how loud it is. I think that’s important, because when I first went into this industry, I thought to myself, ‘What the hell did I get myself into?’ when I walked in there with the noise level and machines. But, with me there, I can be the person they ask questions to or come to when giving these tours.”

In addition to giving tours, she makes time to be a part of several organizations, such as the Local No. 20 Women’s Committee, where she met Carol Brady, head of the organization. Brady was floored with Rogers’ efforts and is still impressed with everything she continues to do for the industry and for local women.

“She is unstoppable,” said Brady. “It doesn’t matter if they don’t want to be a sheet metal worker, Catie will look into other trades and help them get there. I believe we are missing some untapped talent by not looking at more women. The sheet metal industry has a lot of different positions, and I wish women knew exactly what all the sheet metal industry is. I want to stay positive about the future of the trades and having women in them, and we have a shortage of women in the trades in Indiana, but if you leave it up to Catie, we will increase by 10 percent in the next five years.”

She’s not sure how many women she has successfully recruited over time, but it’s been several, and she has no desire to stop any time soon.

While she won’t be formally hired on to recruit by her union, she still has plans to do so on her own and work as a sheet metal worker upon graduation. She wants more students — women and men — to know about the opportunities the trades offer, particularly for students in low-income areas like the one she grew up in. Rogers said that the trades offered her a new way of life, where she could take care of herself and not look to a life of crime or student debt, and she won’t ever stop recruiting and telling her story.

“I mean, I am going to recruit for as long as I possibly can — even if I ever get out of the trades,” she said. “I will always tell students, women, and all people about the trades and why they should get into them.”

Samantha Sine is Products and Education Editor of The NEWS. She can be reached at 248-786-1253 or samanthasine@achrnews.com.
You must login or register in order to post a comment.