This website requires certain cookies to work and uses other cookies to help you have the best experience. By visiting this website, certain cookies have already been set, which you may delete and block. By closing this message or continuing to use our site, you agree to the use of cookies. Visit our updated privacy and cookie policy to learn more.
Home » 2016 Best HVAC Contractors to Work For: Hunter Heat & Air
HVAC Residential MarketHVAC Light Commercial Market

Chris Hunter is the president of Hunter Heat & Air, but it’s fairly clear that he’s not the boss.

Like everyone else at the Christian-faith based company, Chris answers to a higher authority. He and his employees are reminded of that every day by the words posted in the company’s offices and printed on the wristbands they wear: “Whatever you do, work at it with all your heart, as working for the Lord, not for human masters.” That biblical quote, from Colossians 3:23, guides everything the company does.

Chris Hunter’s founding of Hunter Heat & Air in 2006 was a classic HVAC industry start-up: himself, his brother-in-law, and one truck. Today, Hunter is the co-owner — along with his wife and vice president, Nicola — of a company with four locations, 32 employees, and annual sales of $5 million. The success didn’t happen by accident. Hunter made up his mind early on to learn from the best and to apply those lessons to his company.


“I had never worked in the HVAC industry prior to this,” said Hunter, who was employed as a service technician at AT&T when he decided to start his own company. “So, I had the benefit of not having any bad habits.” 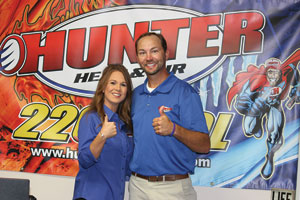 “I've always said the fastest way to get from point A to point B is learn from somebody who has already traveled the road,” Hunter said.

While working full time at AT&T, Hunter was also busy opening his own company, and, over time, the fledgling business slowly but steadily made a name for itself in southern Oklahoma. In 2009, Hunter decided to leave AT&T and put all of his considerable energy into Hunter Heat and Air.

“Since then it has really been an exciting ride and an incredible journey,” he said. “We just had our company Christmas party, and, between our team and their families, we had nearly 100 people in the room. It was truly humbling to see what God has blessed us with.”

Hunter’s people are the rock upon which Hunter has built his business. He treats them well in every professional sense, offering excellent benefits, training, and opportunities for advancement. But it’s the personal aspects of the owner-employee relationships that creates a successful culture.

“It’s extremely family-oriented here,” said Kimberly Shaw, office manager. “We all put family first, and I love that, especially as I have two small children. If I need some time to go to one of my children’s functions, we always find a way to make it work.” 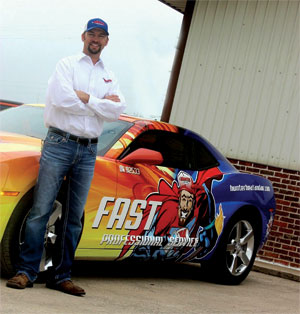 “Chris has created a great atmosphere here,” Lindsey said. “He hires people who are willing to work, and he sets the tone. He lets you know what he wants and expects from you, which helps to make everything go smoothly. And he’s a man of God. He never lies to you or treats you wrong.

“We all know we can go to Chris and talk about anything, which is a comfort,” Lindsey said.

Hunter acknowledged that creating the right human environment at a busy and growing company is essential.

“Everyone has things going on in their lives, and sometimes they might need help,” he said. “If I can be there for my people and their families, I think that’s a blessing and an opportunity, not a chore.”

Joseph Hobson, operations manager at Hunter Heat & Air’s Ada, Oklahoma, location, vouches for the difference a caring employer can make. About five years ago, he had reached a low ebb in his life and prayed for help. The next week Hunter called him, and Hobson joined the contracting business shortly thereafter. Hobson deemed his employment life-changing.

“This is an amazing place to work,” Hobson said. “If any of the employees are going through anything, we all know we can call Chris, and he’ll be there in a heartbeat.”

Thanks to the company’s steady growth, Hunter is also able to offer employees promotions and career advancement opportunities. Hobson is a good example. Hobson had always said that after he had been in the HVAC field for 10 years, he would like to run his own business. He talked to Hunter about his goal, but also of his reluctance to leave the company. Hunter helped him meet his goal by sharing in the company’s expansion and offering Hobson a management role at one of the company’s new locations.

“Chris said, ‘How about I put you in the manager’s spot, and we’ll build this company out?’” Hobson said. “He gave me the reins and let me operate it. But, more than that, he has given me the opportunity to lead and grow, and I’ll never forget that.”

HIGHLY RECOGNIZABLE:Hunter Heat & Air’s bold vans are a familiar sight in southern Oklahoma – and make quite an impression.

Enthusiasm for Hunter runs beyond the company’s employees.

“He’s a stand-up guy, and he has the utmost integrity,” Freeman said. “The first time I met him, I knew I wanted to partner with him.”

Freeman added that Hunter also is an innovative entrepreneur who’s not afraid to do things other companies aren’t doing and is always looking for ways to expand his business. In fact, Hunter Heat & Air is planning a major rebranding soon to Hunter Super Tech Services. This rebranding will convey the message that the company now offers plumbing and electrical services along with HVAC.

“We’ve grown to four locations now, and part B of that growth was to start branching out into the different trades,” Hunter explained. “So, we’re transitioning from Hunter Heat and Air to Hunter Super Tech Services. We have a very nice fleet of branded vehicles — all with the same markings but blue for HVAC, yellow for electrical, and purple for plumbing. We found that our customers needed the other trades, so it has worked out really well.”

The purpose of everything that Hunter invests in? The customer, of course.

“Nothing and nobody is bigger than the customer,” Hobson said. “Chris tells everyone, from day one, to always do what they think is right for the customer.”

Jimmy Antuna, a long-time Hunter customer in Ardmore, is a disciple of Hunter’s and said he always recommends the company to friends and neighbors.

“Anytime we ever need anything, day or night, all I have to do is call him, and he’s got somebody ready to come out and take care of us,” Antuna told The NEWS. “There are a lot of companies in town, but I think he’s by far the best one. If you go with him, he’ll make it right every time.”

THE PATH TO SUCCESS

Hunter said there are two major keys to his company’s success, and he offers both of them to other contractors.

The first is to clearly define and establish your company’s “why,” and then get everyone behind it.

“We gauge everything we do through the lens of our mission,” Hunter said. “Our mission is to keep customers comfortable, save them money, do it better than anyone else, and honor God while we do it. If we can accomplish all four of those, then we are going to hit it with everything we’ve got. If we can't, then we don't do it. It's pretty simple.”

Hunter’s second piece of advice is to learn from industry leaders. He makes no bones about the fact that the Service Roundtable and Service Nation Alliance have been tremendously helpful to his company. 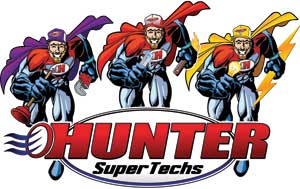 SUPERTECHS:Hunter Heat & Air is rebranding to Hunter Super Tech Services as the company branches out into plumbing and electrical.

“I came into this business as a technician, and it wasn’t until I started interacting with other contractors through the Service Nation Alliance that I learned how to claim our market, build our team, and measure the numbers,” Hunter said. “That organization’s been a game-changer for us.”

The admiration is mutual.

“Chris Hunter is the contractor every other contractor in the industry should strive to emulate,” said Matt Michel, CEO, Service Roundtable. “He has built a phenomenal company in a rural market, which he dominates. Because of the way Chris treats his team, the culture he has built, and the upbeat attitude that pervades Hunter Heating & Air, Chris does not face a shortage of technicians — he has a waiting list and can pick and choose who he wants.

“Chris does more than achieve,” Michel added. “He stays true to his beliefs and gives back. He started a weekly life skills training class that has expanded beyond his company and outgrown his facility. He’s attracting people from across the community and beyond and is giving back within the industry as a Service Nation advisory board mentor and a Service Nation business coach.”

Amidst all the praise for himself and his company, thanks to Colossians 3:23, Hunter always remembers where the real praise should be directed.

“Our team’s success has been great, but the most important thing is to remember who we truly are working for,” Hunter said. “All work has eternal meaning if done with the right heart.”

A-Gas Teams Up with Contractors in Refrigerant Reclamation Efforts