This website requires certain cookies to work and uses other cookies to help you have the best experience. By visiting this website, certain cookies have already been set, which you may delete and block. By closing this message or continuing to use our site, you agree to the use of cookies. Visit our updated privacy and cookie policy to learn more.
Home » Survey: 80 Percent of UK Ammonia Refrigeration Fails to Meet Dangerous Substances Standards
HVAC Contracting 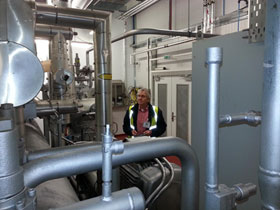 A survey of over 100 ammonia refrigeration systems operating in food manufacturing facilities in the United Kingdom found that less than 20 percent met legislation covering dangerous and explosive materials.

The survey by consultant Stephen Gill Associates also revealed that 30 percent of sites had either no risk assessment or inadequate ones for their ammonia refrigeration systems.

Principal Stephen Gill said, “Unfortunately, lack of understanding of the requirements is no excuse for lack of action in the eyes of the HSE [Health and Safety Executive], and indeed the insurance companies.”

The ATEX 137 Directive on explosive substances requires that all companies operating with areas (including those containing ammonia refrigeration plant) classified as ‘Hazardous,’ classify their production areas into zones and assess the risks both to their employees and their plant assets. While the majority of the sites in the survey had DSEAR (Dangerous Substances and Explosive Atmosphere Regulations) assessments for the rest of the site, the ammonia refrigeration plants had been ‘bypassed’ as they were considered ‘too specialist,’ according to the consultancy.

It was not just the DSEAR/ATEX legislation giving operators problems to meet their legal obligations, the consultancy said. “The duties imposed by the Pressure Systems Safety Regulations 2000 (PSSR) relating to pressure systems for use at work and the risk to health and safety were also found to absent in many cases.”

The company discovered that many operators of ammonia refrigeration systems found it difficult to understand the standards that support the legislation. Gill said, “What was even more surprising was that many of the refrigeration contractors maintaining the systems also gave confusing or inaccurate advice to their clients.”

Certain aspects of DSEAR/ATEX can appear confusing, he added, but this legislation is all about personnel safety, allowing the workforce to understand the issues associated with their place of work, and ensuring that the number of accidents and injuries to persons operating in these industries is reduced.

The company found that many operators were using ammonia-based refrigeration systems for the first time due to changes in environmental laws around refrigerants. All this comes at a time when the HSE is putting a higher priority on health and safety of operations involving flammable materials.

Gill added, “We are fortunate in this country to have a good safety record when it comes to ammonia refrigeration systems. Incidents are thankfully few and far between so we were surprised by the high number of sites with inadequate or inappropriate safety procedures in place.”

Amazon Announces First ‘No Checkout’ Convenience Store for US in 2017

80-year-old Eaton Williams to Close for Good on Nov. 30