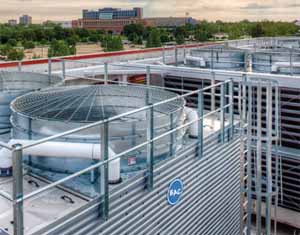 This analysis shows how a water-cooled 500-ton chiller system when compared to a 500-ton air-cooled chiller system results in approximately $45,000 in annual operating costs savings. Additionally, the water-cooled system reduces peak energy demand by 45 percent. The reduction in energy usage and peak demand, especially in HVAC systems, is not just significant for the building owner paying electric bills, but it also helps reduce the stress on the electrical infrastructure and carbon emissions. Lastly, water-cooled systems actually use less water than air-cooled systems since a significant amount of water is used in electricity production. The water usage reduction from lower electricity production more than offsets the water consumed by water-cooled systems.

Below are the two main methods for heat rejection, air-cooled and water-cooled technology:

• Air-Cooled: A process by which air passes over a coil or channel containing fluid. Heat is transferred from the coil directly to the air.

• Water-Cooled: This process utilizes a spray system to pass water over fill media or coils to reject heat to the atmosphere through evaporation. The spray water itself or the fluid contained in the coil can then be used by a cooling system.

The following analysis compares two 500-ton chiller systems, one with an air-cooled system, and the other with a water-cooled system. A 500-ton system was selected because it is an average size for a typical mid-sized building.

The two systems are operating at conditions consistent with those used to calculate the systems integrated part load value (IPLV) efficiency. The IPLV shows the two systems operate at part-load most of the time with a weighted average capacity of 290 tons, for 4,380 hours of operation, the equivalent of half the year.

This leads to a savings of $44,500 annually and approximately 33 percent savings on annual operating costs. For the table above, the following assumptions were used:

• Maintenance cost comparison between the two systems assumed to be equal.

The simple payback period in this example is just 1.2 years. Assuming the average system life span of the system is 20 years and inflation is 2.1 percent through 2035, the NPV of total water cooled benefit is approximately $820,000. This savings would be even greater if energy costs continue to climb as expected.

From this and other studies, water-cooled systems are the most energy efficient systems. They not only reduce operating costs and provide a clear financial benefit, but they help protect building owners and operators from uncertainties in electricity pricing. When selecting a cooling system, make sure to do an energy analysis to see which system is best for your application.