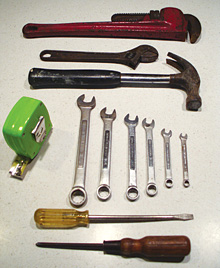 Tools are designed to get the job done quicker and easier. In the multifaceted HVAC industry, tools are stocked depending on the type of work typically performed and the tasks most often executed on the job. For example, if a person often works with sheet metal, then he’ll likely keep a hand aviator and other types of snips handy. Other tools, such as multimeters, are useful across multiple applications and are likely to be found in most HVAC toolboxes. And, when you find a good tool — one that takes a lickin’ and keeps on tickin’ — you’re bound to keep it around for years, and, in some cases, decades.

What’s in Your Toolbox?

Some contractors and techs will hold on to tools until something bigger or better comes along. Dustin Uptmore, area service manager, commercial service, Capstone Mechanical, Waco, Texas, said a tool’s longevity varies, though most are kept around for four to five years. He said he’s worked with technicians who “would lose tools regularly and have to replace them. Others would have tools for a very long time — more than 10 years.” As for himself, he said when a new tool comes around that makes his job easier, he’ll consider an upgrade.

Uptmore said the tools he’s had in his toolbag the longest are Klein 5/16- and ¼-inch nut drivers, which have two magnetic tips. Though he bought them only five or six years ago, he uses them frequently. “These are a must-have on a/c equipment. Almost all heating and air conditioning equipment requires the use of these two sizes of nut drivers.” He also keeps a Milwaukee 12-V impact tool with an assortment of bits — ¼, 5/16, 3/8, ½, flathead, and Phillips.

Uptmore added that instead of the traditional toolbox, technicians at his company have tool backpacks. “These keep technicians from making multiple trips to the truck when they have an organized and fully stocked backpack,” he said. “It also lets them keep both hands free when climbing ladders.”

Josh Bigelow, president and owner, Great Dane Heating and Air Conditioning Inc., Clinton Township, Mich., also said he’s made use of his ¼- or 5/16-inch Malco magnetic nut drivers on nearly every call since they joined the team in 1992. He said he’d replace them, except they just don’t make them this way anymore.

“I would be lost without them,” he said, acknowledging just how much he relies on the tools.

Lee Bayless, field supervisor/lead refrigeration tech, service dept., Shoffner Mechanical Services, Knoxville, Tenn., said his eldest tools are his crescent wrenches. He said he doesn’t use them as frequently as he used to, but that they’d never get left behind, either. Other tools in his collection are four 11-in-1 screwdrivers, which he attaches end-to-end to lengthen when necessary.

Tyler Wadsworth, sales manager, P.K. Wadsworth Heating & Cooling, Solon, Ohio, covets his magnehelic gauge, which he’s possessed for seven years. He said he’s kept it around because the simple four-hole static pressure test can give an incredible amount of information about how a forced-air system is operating. “I liken this test to having your blood pressure tested at the doctor’s office. It is a quick and easy test that will give you loads of information on how your furnace and duct system (circulatory system) is performing.”

He shared a story of how he helped a customer with it. “I came to a client’s home who was complaining of poor airflow to the second floor in the cooling season. I started by testing the ‘blood pressure’ of the system by using the four-hole test and calculated a total external static pressure of 0.96 inches, well above the factory recommended 0.5 inches wc.

Upon further examination of the numbers, I noticed an unusually large pressure drop across the filter, 0.31 inches, again well above the recommended 0.1-inch wc drop. Seeing this, I removed the 1-inch pleated filter and immediately the homeowner reported greatly increased airflow from the upstairs registers.

“It’s a perfect example of how a 10-minute four-hole static pressure test performed with a magnehelic [gauge] easily diagnosed and remedied a common heating and cooling complaint for one of our homeowners.”

Some people have acquired tools when they’re new to the industry and have kept them for decades, but they still are useful after all that time. Richard Ciresi, president, Aire Serv of Louisville, Louisville, Ky., said he still has a sling psychrometer he bought 35 years ago. He said it’s simple to operate and requires no batteries. He’s kept it around for this long because it’s “a visual representation of what we are really measuring. It confuses the young techs because they haven’t seen one before, so it makes for interesting conversations,” he added.

Ciresi has found the tool has uses beyond the OEM’s intentions. “I’ve had children that want to play with it because it appears to be some kind of toy, so it is an ice breaker when in the home. Most adults respond with ‘I really never understood wet blub until now.’ ”

Eric Kjelshus, owner, Eric Kjelshus Energy, Kansas City, Mo., has utilized the same vacuum gauge for more than 50 years, and it still works. He has a set of ¼-inch drive tools and an old-fashioned steel case that his grandpa gave him when he was 14 years old. He said his collection boasts numerous sheet steel tools from the 1950s, and a stack of various instruments that aren’t used in the industry at all anymore. He also boasts blacksmith tools that his great-great-grandpa used that are 150 years old.

Extra! Extra! Read All About It

The final tool that Kjelshus mentioned is used in HVAC, though it likely would not be amongst the who’s who of many HVAC tools lists. He said he has HVAC textbooks from the 1940s and 50s, though these aren’t used much anymore. He referenced books covering R-12 as an example of just how things have changed over time in the industry.

Joe Kokinda, president and CEO, Professional HVAC/R Services Inc., Avon, Ohio, also has an old textbook, Modern Electric and Gas Refrigeration, fourth edition. He described it as “a fascinating precursor to the 18th edition we now have.” He glances through it often, he said, as a reminder of how the industry has advanced.

Additionally, Kokinda mentioned an old Whitney punch, circa 1961, that is hardly used. Reminiscing, he further referenced “a deadweight tester I used in the 1970s to set gauges’ calibration from constant vibrations they were subjected to in marine applications,” he said.

As these accounts attest, if tools are taken care of, they can not only make a technician’s job easier, but last a long time, which is well worth the effort of adding them to your toolbox or toolbag — or backpack. And, for those tools that are no longer utilized, perhaps because HVAC technology and equipment has changed too much to make them useful still, they serve as a reminder to the industry of where it began and where it’s going.

Deciphering the Value of Qualified Salesmen

Cherie Preville is Education and Products Editor. She can be contacted at 248-244-6496 or cheriepreville@achrnews.com.