Two entities contractors really don’t want to have unfavorable dealings with are the U.S. Environmental Protection Agency (EPA) and the Internal Revenue Service (IRS). But, if those two government agencies hear that you’re in possession of counterfeit refrigerants, they could well come knocking at your door with stiff fines and harsh penalties. And the U.S. Customs Service could join in if these refrigerants were illegally imported into the U.S.

And, by the way, there is a possibility that said refrigerants could consist of an unsafe blend of something other than what is identified on the label, leading to system damage or, potentially, a fatal explosion. 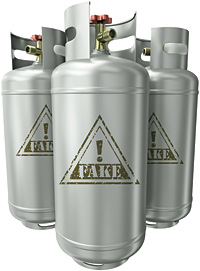 Counterfeit and illegally imported refrigerants have existed under the surface of the HVACR industry for years. With hydrochlorofluorocarbon (HCFC)-22 increasing in price due to a government phase down, more and more fly-by-nighters are working to get their hands on the product any way they can.

Here are a couple of examples:

• The owner of a St. Louis-area appliance parts business was sentenced last year to 13 months in prison for smuggling counterfeit R-22 from China and selling it to contractors at discount prices in a promotion called “Freaky Freon Fridays.” It was a complex scheme involving use of cargo containers on a small freighter, false shipping documents, and fake invoices.

• In 2009, the president of a Miami-based company pleaded guilty to knowingly importing illegal R-22 and was sentenced to 30 months imprisonment followed by three years of supervised release. The corporation itself faced five years of probation and forfeited $1.3 million to the U.S. government, while two individuals deemed responsible were fined $40,000.

Manufacturers, importers, and distributors of legal refrigerants, as well as industry trade associations, have stressed the regulatory and safety dangers surrounding counterfeit and illegally imported refrigerants for years. They’re quick to point out that HVACR contractors who have such refrigerants are as guilty as those involved in the creation of such products.

“Contractors found with an illegal refrigerant face the likelihood that it will be confiscated by the government on the spot, even though they may have purchased it in good faith,” said Charlie McCrudden, vice president of government relations for Air Conditioning Contractors of America (ACCA). “A contractor may also face further consequences for a violation from the U.S. Customs Service, the EPA, and the IRS. In the last four years, the federal government has handed down sentences to individuals that include fines, penalties, and jail time.”

Beyond the fines are the dangers of dealing with the unknown.

“The importation of refrigerants not on the SNAP [Significant New Alternatives Policy] list violates the Clean Air Act, and there are serious consequences for anyone caught holding them or using them,” added McCrudden. “As has already been detailed in national press coverage, some refrigerants coming into the U.S. from other countries are not just imported illegally, but they are counterfeit,” said McCrudden.

An Air-Conditioning, Heating & Refrigeration Institute (AHRI) white paper released in February 2013 offers guidance to detect and avoid counterfeit refrigerants. The paper notes that counterfeit hydrofluorocarbon (HFC)-134a containing methyl chloride or chloromethane “had been found in stationary air conditioners in many countries. R-40 chemically reacts with aluminum inside HVACR systems to generate highly reactive and/or toxic compounds. Exposure of the system’s contents to air and/or moisture could result in production of a strong acid and violent chemical reaction.” Several container systems have exploded at service facilities as a result of this phenomenon — some resulting in fatalities.

“Compounds such as R-40, R-22, R-142b, R-152a, and R-12 have been found mixed with R-134a in newly filled refrigerant cylinders marked as containing R-134a. There have also been instances of counterfeited brand name R-134a cylinders sold containing refrigerants other than R-134a.”

Ken Gaglione, senior marketing manager, Honeywell Heat Transfer, said, “Counterfeit or illegal imports to the U.S. present a serious challenge to the long-term health of most any industry, and refrigerants are no exception. Beyond the legal implications of infringing on intellectual property rights and violating U.S. regulations, counterfeit products represent a significant safety and health concern to installers and end users by virtue of their untraceable origin and unknowable composition. And, contrary to the popular notion that counterfeit and illegally imported products present a great savings due to their sometimes cheap prices, the true cost to the industry and U.S. economy is measured in U.S. innovation and jobs.”

The industry is actively combating the situation.

DuPont has added a technology twist to the equation with its recently announced brand protection initiative, aimed at reducing both illegally imported and counterfeit products in the U.S. and abroad. According to Beth Sassano, global brand protection manager, DuPont, “The initiative is a multifaceted program utilizing several technologies to guarantee that you are purchasing and using genuine DuPont refrigerants.” Canisters have a patented Izon® security hologram that offers immediate visual verification that the refrigerant is a genuine DuPont product.

All of these efforts, as well as other dynamics in the industry, may be having an impact, said Jay Kestenbaum, senior vice president, sales and purchasing, Airgas Inc. “The impact of illegally imported refrigerants on the HVAC industry was much more significant years ago during the days of enormous use of CFCs [chlorofluorocarbons]. The lack of enforcement, as well as the enormous profit incentive, clearly impacted our industry. Several years of published seizures and arrests clearly had a major impact on subsequent illegal activity. Over the past 10 years, there has been a great reduction in potential illegal imports, since there is much more scrutiny by the various authorities such as the EPA and IRS, as well as customs officials, and a much greater focus by the industry in recordkeeping and knowing the source of all supplies.”

With pocketbooks and reputations at stake, both in terms of governmental fines and dangers of failing systems charged with fake refrigerants, contractors need to be as much a part of the monitoring of counterfeit and illegal imports as others in the industry.

In its white paper, Air-Conditioning, Heating, and Refrigeration Institute (AHRI) offers these tips:

• Know your supplier: Obtaining refrigerant from a trusted and well-known source that can provide traceability is a good practice to prevent contamination of an HVACR system.

• Verify refrigerant in a cylinder before using: Ensure the authenticity of the refrigerant. Checking refrigerant cylinders in the field with a portable refrigerant analyzer or performing a halide torch test can help prevent contamination.