Can the Millennials Take Us to a New Future? 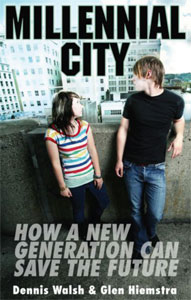 How can you not like a book that begins, “The future is not what it used to be,” quoting Laura Riding and Robert Graves from 1937?

In the 1930s, the Great Depression certainly had a huge impact on everyone’s outlook. In our time, the Great Recession has rocked our world and changed many lives. So what can the younger generation look forward to? What can they do to make things better?

The book Millennial City: How a New Generation Can Save the Future, by Dennis Walsh and Glen Hiemstra, addresses the millennial generation and the near future. The authors state that in 2008 most of the world’s population had shifted to cities and by 2050 the United Nations predicts 70 percent will live in cities.

The millennial generation, identified as young people born between 1978 and 2000, are flocking to cities. The future of cities, thus, is intertwined with the future of the millennials, note Walsh and Hiemstra.

Since cities are filled with many buildings, residential and commercial, and they all require some form of HVAC, a future with many people living in cities requires sustainable homes and buildings installed with efficient HVAC. That’s where our industry comes in.

The authors point out that numerous cities, not just in the United States, are facing tough choices. “Growing cities have to face the fact that cities consume two-thirds of our total energy and produce over 70 percent of global energy-related CO2 emissions…. Uncontrolled urban development can't continue.”

Obviously, everyone in the industry knows that HVAC is responsible for a great deal of energy consumption and HVACR can be part of a much more energy efficient future.

Some cities are growing while others are shrinking. The authors write that growing cities need to “grow in a smart way” and those that are shrinking need to “shrink smartly.”

The challenge for cities can be broken down into smaller pieces, looking for the best technologies and integrating them, for example, into high performance buildings.

As far as new models, net zero energy buildings provide new opportunities. The Bullitt Center in Seattle was built to be net zero. The U.S. Army Corps of Engineers is seeking to make military bases net zero in energy and emissions, notes the authors.

From model buildings you can develop model cities.

“By 2030, cities will be a battleground for sustainability,” state Walsh and Hiemstra. “Without cities, a transition to a low-carbon, resource-efficient green economy as a means for implementing sustainable development will always remain an aspiration rather than a reality.” Solo survivalism will not work.

Critics say that sustainability will never work. It is not achievable. But a number of companies are already making it happen.

Toyota pioneered lean manufacturing, which is now used by many manufacturers. Wal-Mart has the goal of zero waste by 2025. Cutting waste saves money for the company, its suppliers, and its customers. The U.S. Business Council for Sustainable Development came up with the idea of By-Product Synergy — one business’s waste can be another’s raw material.

“To imagine a new future, we have to stop trying to simply build a more efficient past,” assert the authors. Building a better city is about people and their willingness to change. We need vision and innovation. We need to breed new ideas.

Mayor Michael Bloomberg of New York said that cities will need to innovate as much as companies to take on infrastructure challenges, improve planning, and create jobs.

All levels of government need to create an environment that promotes growth. “Long-term economic growth requires national, state, and local government to create a predictable and competitive business climate for all industries across the board,” Walsh and Hiemstra write.

More than half of construction companies expect 60 percent of their projects to be green in 2015, up from just 28 percent in 2012 and 13 percent in 2009. “That’s not incremental progress. That’s a revolution,” say the authors. And companies are doing it because it makes economic sense. The life-cycle cost of their buildings is less.

In the future, the cloud technology that we’re starting to implement now will go from being an option to standard practice. The transition to an “intelligent infrastructure” will grow.

Many of the elements to create the sustainable cities of the future lie in the hands of people in the HVACR industry — among the manufacturers, distributors, and contractors helping to construct or retrofit buildings to make them more energy efficient and resource efficient using technologies such as geothermal heat pumps, solar panels, fuel cells, and combined heat and power, and utilizing building automation systems and energy management systems to make sure every bit of electricity and water used in that building is used optimally.

The authors conclude, “All of us are going to spend the rest of our lives in the future. We can do nothing to change the past, but we have enormous power to shape the future.”

Millennials in the HVACR industry can play a major part in helping to shape a bright future in the United States and around the world.

The book Millennial City: How a New Generation Can Save the Future, by Dennis Walsh and Glen Hiemstra, is available in Kindle Edition by clicking here. Write to the authors at info@futurist.com. Visit www.futurist.com for a look at emerging ideas, trends, and technologies.