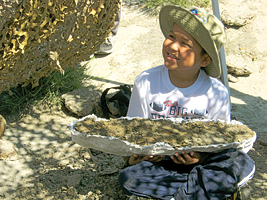 MILWAUKEE — Nine-year-old Christian’s nickname is Diego, inspired by the prehistoric saber-toothed tiger of the same name in the movie “Ice Age.” His favorite movie is “Jurassic Park.” He spends hours reading and learning about dinosaurs and other creatures of the past. So, when Make-A-Wish®, the nonprofit organization that grants the wishes of children with life-threatening illnesses, offered to grant Diego a wish, it came as no surprise to his parents that the wish involved dinosaurs. What did surprise them was that Diego, who suffers from leukemia, wished for more than a museum trip to study dinosaur skeletons; he wished to actually dig for dinosaurs, with hopes of unearthing a Tyrannosaurus rex bone.

With the help of Make-A-Wish and Luxaire® distributor Solar Supply Inc., Diego’s wish came true. In July, he and his family traveled from Diego’s hometown of Santa Rosa, Texas, to Baisch’s Dinosaur Digs in Glendive, Mont., where they were given free rein of the property. Diego played paleontologist-for-a-day and was accompanied by Jerry Jacene, field director/paleontologist with the Makoshika Dinosaur Museum in Glendive, Mont., and Alan Brown, geology instructor at Middle Tennessee State University and director of the school’s Mineral, Gem, and Fossil Museum, Murfreesboro, Tenn. Together, they braved the heat and dust of eastern Montana’s Badlands and discovered two dinosaur bones: an 18-inch section of a rib bone from a 25- to 30-foot duck-billed dinosaur and broken pieces of arm bone believed to be from the same type of dinosaur.

Jacene and Brown shared information with Diego about the plant-eating dinosaurs known as hadrosaurs and taught Diego how to apply plaster bandages around the bones so that they could be removed from the site and taken back to a laboratory to be safely studied. To add to Diego’s excitement, operators of the dig site gave Diego permission to take the bones home to Texas. However, because members of the public are prohibited from traveling with dinosaur bones, Jacene, who is licensed to transport them, volunteered to take the relics to Diego’s home in Texas.

The excitement continued when Diego returned home. Ponciano Perez Jr., manager of the Harlingen, Texas, branch of Solar Supply Inc., greeted Diego at the airport and presented him with a large toy dinosaur wearing personalized dog tags with the name Diego.

“The look on Diego’s face was priceless,” recalled Perez. “Thanks to Luxaire, I’ve been involved in a number of Make-A-Wish activities over the years, and I never grow tired of the smiles we help put on children’s faces. It’s an awesome experience, and I am very proud of Solar Supply and Luxaire’s willingness to get involved with the program, and help give something back to children and families in the communities where we do business.”

“Luxaire and Solar Supply have been faithful supporters of Make-A-Wish Rio Grande Valley for many years and have truly become part of the Make-A-Wish family here,” said Ava Sandlin, executive director of the Rio Grande Valley chapter. “Over the years, wishes may vary, but Luxaire remains the same, faithful and eager to help our wish kids.”

The relationship between Luxaire and Make-A-Wish has resulted in donations totaling more than $2.4 million, enough to grant nearly 330 wishes. The most recent agreement between the two organizations extends the relationship into 2014 and commits $750,000 in Luxaire contributions over three years to the organization nationwide.

For more information, go to www.joinluxaire.com/MAW.