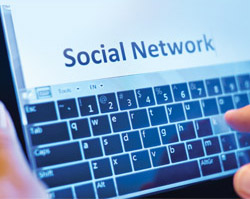 Working to protect itself and its employees; Isaac Heating and Air Conditioning in Rochester, N.Y., created its social media policy after consulting its insurance company, HR department, and an HR consultant. The residential and commercial contractor currently has both a Facebook and a Twitter account.

“Personal social networking is not allowed during business hours and this is clearly stated in our employee manual,” explained Eric Knaak, vice president of operations for Isaac Heating and Air Conditioning. “The policy is not as in depth as it could be and we will be revisiting this in the coming year. As social media grows, so does the opportunity for negative or damaging events to take place.”

“We trust that our folks know what image we are trying to display,” he said. We believe our social graces are the same as they are in print and/or in person — courteous and education centric. We believe in our folks’ intent. Mistakes will occur, but it’s the intent that matters.”

One subject that the National Labor Relations Board (NLRB) watches is social media policies. The (NLRB) is an independent federal agency established to help enforce the National Labor Relations Act (NLRA). According to its website, “Congress enacted the NLRA in 1935 to protect the rights of employees and employers, to encourage collective bargaining, and to curtail certain private sector labor and management practices, which can harm the general welfare of workers, businesses, and the U.S. economy.”

Ann Purcell, associate general counsel of the NLRB, has been providing reports concerning social media cases starting last year in April 2011. She followed that report up with one in January 2012. In Purcell’s most recent report on May 30, 2012, she gave an example of seven recent social media cases, six of which, “I have concluded that at least some of the provisions in the employers’ policies and rules are overbroad and thus unlawful under the National Labor Relations Act,” she said. In looking through the report, some guidelines emerged in the midst of the legal explanations that contractors can take under advisement in crafting their own social media policy.

• Don’t be overbroad. The counsel dinged company policies that used far-reaching language. It seemed that if there was an opportunity to define a broad statement, that the company should strongly consider doing so. Most vague, overreaching statements were considered unlawful.

• No “savings clauses” allowed. One company added the following clause to the end of its policy. “This policy will not be construed or applied in a manner that improperly interferes with employees’ rights under the National Labor Relations Act.” The NLRB council deemed, “this clause does not cure the otherwise unlawful provisions of the Employer’s social media policy because employees would not understand from this disclaimer that protected activities are in fact permitted.”

• Control unauthorized postings. Employers are allowed to control what is posted in their name. “A rule that requires an employee to receive prior authorization before posting a message that is either in the employer’s name or could reasonably be attributed to the employer,” is lawful.

The information above is just a sampling of the 24-page report that was written in light of the NLRA. With revisions, the seventh company’s social media policy was deemed lawful and set as an example to follow. Read the full report and find the sample here under the first “OM Memo” http://1.usa.gov/R1jY5z.

The NLRB is not the only word in social media policies. According to Nancye Combs, AEP-SPHR, of HREnterprise.com, a virtual HR management company, and HR consultant for Heating, Air-conditioning & Refrigeration Distributors International (HARDI), lawyers across the nation were up in arms over the pieces of policy that were deemed unlawful in accordance with the NLRA. In a blog on HARDI’s website she wrote, “Legal discussion included comments that indicate that the NLRB is attempting to make certain that social media policies ‘have no teeth to them.’ ”

Despite the disagreement between the NLRB, lawyers, and HR policy managers, until legal arguments are made and the courts rule differently, the NLRB rulings will stand. In light of these new rulings, Combs released an example of a social media policy that, “Given the contents of their [NLRB] opinion and suggested policy, here is a policy that looks like it might get a thumbs up.” http://bit.ly/NlJp0E

Combs said a recent study identified that 40 percent of companies have a social media policy in place. Companies do this because employees are getting online and trashing employers, customers, and co-workers.

“The employer is responsible for everything their employees put on the web. What are you going to do to protect yourself?” Combs asked. “Your employees can go on social media. The most important thing to look for is: are they speaking on behalf of the company? They are not authorized to do that. They can, obviously, speak for themselves.”

“Now they are speaking on behalf of all the employees and they are not authorized to do that. They also can’t use your logo in any disparaging or commercial way. Employees have the freedom to grieve about their job and you can’t put a chilling effect on them. But they can’t speak for the company or the employees of the company,” Combs said.

Company policies are something that most HVACR contractors are familiar with creating and following. When it comes to social media, however, some contractors find policies for this communication medium to be a daunting task — one that doesn’t always seem worth the time investment. Ranging from non-existent to corporate lockdown, contractor social media policies affect the way employees communicate via social networks to the customer.

For contractors looking to engage in social media and wanting to create their own policy, it is important that they understand the definition of social media. According to Merriam Webster’s Dictionary, social media is “forms of electronic communication — such as websites for social networking and microblogging — through which users create online communities to share information, ideas, personal messages, and other content, such as videos.” Examples of social media include, Facebook, Twitter, Pinterest, LinkedIn, Tagged, Google+, etc. YouTube is technically considered a search engine in many cases, but because of its sharing, conversational, and broadcast nature; it is often included in the list of top social media sites as well.

In essence, there is a lot of good exposure to be had online and the potential for a message to spread quickly and exponentially is great. That viral possibility, however, could destroy a company if not carefully managed via legal policies.

A balance in social media policy can be difficult to attain and it may be wise for contractors to hire a lawyer when it comes to setting any policies that affect employment within their companies. Whether dabbling in social media or jumping in full bore, quite a few of the contractors The NEWS discussed social media policies with seemed to be interested in one major thing — connecting with their customers. It was that goal that seemed to help them persevere through the time investment into creating and implementing successful social media communication and policies.