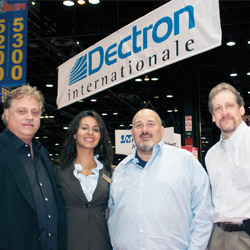 “SRS Enterprises encompasses what we look for in a representative of the year,” said Harry Topikian, Dectron vice president of business development. “They sold a large number of units across the spectrum of Decton’s Ecosaire, Circul-Aire, and Dectron Inc. product lines, including very high-profile projects.”

The 18-year-old manufacturer’s representative firm, which operates offices in Brooklyn as well as Middletown, N.J., and covers the territories throughout New York City and Long Island, sold dozens of air treatment systems to the Croton and Catskill-Delaware water treatment plants that are responsible for the improved taste, odor, color, and quality of drinking water for the city of New York. Projects included installing dehumidifiers, make-up air, heating, cooling, and computer room precision air conditioning systems.