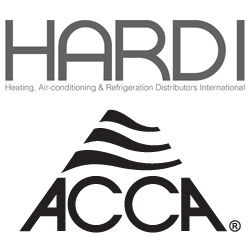 Although the Department of Energy (DOE) announced its final rule establishing regional standards for air conditioners, heat pumps, and furnaces last October, the fight is not over yet. Both the Heating, Airconditioning, and Refrigeration Distributors International (HARDI) and Air Conditioning Contractors of America (ACCA) have filed petitions to intervene through the United States Court of Appeals against the DOE. The petitions to appeal the rule are based on the claim that DOE failed to follow proper procedures in issuing the rules for regional efficiency standards.

HARDI appealed to the courts through the legal advocacy group Cause of Action, which is a nonpartisan organization that uses public advocacy and legal reform tools to ensure greater transparency in government, protect taxpayer interests, and promote economic freedom.

According to the new rule, the country will be divided into three regions, and the minimum efficiency standards for residential HVAC appliances will vary depending on the region in which they are installed. The new rules become effective in May 2013 for nonweatherized furnaces, and in January 2015 for weatherized furnaces, central air conditioners, and heat pumps.

“The Department of Energy utilized a direct final rule procedure which is designed to expedite rulemakings when there are few challenges,” said Jon Melchi, HARDI director of government affairs. “There are certain procedures that they are required to fulfill in order to utilize this regulatory tool, and we have contended that they did not do so. In December, the American Public Gas Association petitioned the court of appeals regarding the direct final rule process that established regional standards. We are intervening in the case on APGA’s behalf.”

HARDI believes there are a handful of procedural requirements that the DOE has to undergo in order to make a direct final ruling and that those requirements simply were not fulfilled. According to HARDI, the DOE failed to recognize significantly affected entities such as distributors and contractors when considering the consensus agreement negotiated between the Air-Conditioning, Heating, and Refrigeration Institute (AHRI) and environmental advocates. HARDI also believes the DOE added items to the direct final rule that were not part of that consensus agreement and ignored over
40 comments filed in opposition to the Direct Final Rule.

When asked for a comment on the lawsuits, AHRI president and CEO Steve Yurek said, “We are disappointed that our industry partners have taken this action. Even if this lawsuit is ultimately successful — and we don’t believe it will be — regional standards are inevitable and a settled issue. There are many more important threats that our industry must unite to meet. It is our hope that we can put this behind us quickly and move on.”

The associations now wait for the U.S. Court of Appeals to respond to their respective petitions. ACCA estimated there should be a response in anywhere from two weeks to two months. In the meantime, HARDI and ACCA are both advising all of their members to proceed as if the rules are going to go into effect on May 1, 2013.

“The DOE simply did not do a thorough economic analysis, especially their due diligence in assessing the economic impact to small businesses,” Melchi said. “And that has been a bone of contention for us all along and something every federal agency should be compelled to do for any regulatory proceeding.”

HARDI is concerned that what it believes is DOE’s failure to follow proper procedures will cause financial harm to HARDI’s distributor members. They also worry about the precedent this will set for the HVACR industry going forward.

“If we were to simply ignore this abuse of statutory process, all federal agencies would remain unchecked,” Melchi said. “This rule completely changes the nature of HVAC distribution forever going forward, and for the DOE to not impart all due diligence in creating a regulation that impacts the livelihoods of businesses and individuals is counter to the way the regulatory process is supposed to work. This process is a perfect example of why small businesses are angry with Washington, D.C. Our voices and views were not considered. We had hoped that DOE would do a thorough analysis as required by law for decades and make sure that the new regulation is economically justified, technologically feasible, and likely to save considerable energy before a new standard is established.”

ACCA filed suit so it could have a seat at the table if the court agrees with the organization’s contention that steps were skipped. It would be a seat ACCA feels it did not have the first time around.

“ACCA is essentially an affected stakeholder in this case,” said Charlie McCrudden, ACCA vice president, government relations. “The consensus agreement that became the final rule directly impacts our members because it creates new regulatory obligations and liabilities which are still unclear. We never had a say in the drafting of the consensus agreement. Some would argue we had an opportunity to comment on it in the direct final rule process, but there was a step skipped by using that process. So our ability to comment and effect change was shortcut.”

If the court finds in favor of the APGA, which ACCA believes it will, the court will decide to either remand it to a negotiated settlement or send it back to the DOE and tell the department it needs one more step to allow more comment.

Contractors are mostly concerned about enforcement and installation issues that arise with condensing furnaces in some households. Requiring a condensing furnace means a contractor must address ventilation and condensate. In some cases, the installation requirements can add anywhere from $1,500 to $5,000 on a project.

“The timetable for coming up with the enforcement rule is also a concern,” McCrudden said. “Let’s assume DOE takes the maximum amount of time to develop this enforcement rule. That means it will conclude in mid-January of next year and that is approximately 100 days before the rule goes into effect. That is a very short timetable. I believe this enforcement rulemaking is much more complicated than people realize.”