This website requires certain cookies to work and uses other cookies to help you have the best experience. By visiting this website, certain cookies have already been set, which you may delete and block. By closing this message or continuing to use our site, you agree to the use of cookies. Visit our updated privacy and cookie policy to learn more.
Home » Department of Energy Considers the End of Noncondensing Gas Furnaces, Water Heaters
HVAC Residential MarketHVAC Light Commercial MarketStandards & Legislation

The availability of noncondensing gas furnaces and water heaters hangs in the balance as the U.S. Department of Energy (DOE) considers energy efficiency standards and industry input.

On one hand, ACCA has aligned with several groups representing the gas, construction, and housing industries to deliver an extensive public comment in defense of preserving access to this type of equipment. Commenting collectively as “Gas Industry Petitioners,” this ad hoc alliance made its case — to the extent that the DOE’s Office of Energy Efficiency and Renewable Energy (EERE) opened a formal public comment window for feedback about the petition. On the other hand, manufacturers of alternatives, such as electric heating options, would certainly benefit from a reduction in gas-based competition.

Also, certain energy and environmental stakeholders support a much broader decarbonization effort across the U.S. that would reroute fuel choices toward electricity. Persuading the DOE to eliminate noncondensing equipment of this kind entirely from the market would represent a swift regulatory flanking maneuver serving this vision.

As a result, noncondensing heating equipment finds itself in the middle of the discussion. A momentous energy paradigm shift looms off in the distance, but up close, the entire issue could come down to the rulemaking minutiae of what the word “feature” means.

WHAT’S IN IT FOR CONTRACTORS?

The gas and propane industry’s interest in preserving noncondensing options is plain enough. The argument that ACCA offers in defense of the status quo is a little less obvious. ACCA president and CEO Bart James summed up one scenario his association worries about.

“Government mandates that would outlaw noncondensing products drive consumers to low-ball contractors who are unable to properly install the condensing furnaces.”

That concern is consistent with ACCA’s longtime focus on the benefits of proper installation — or, on the impacts of bad installations, which reflect unfairly on the equipment manufacturer, damage the reputation of HVAC contractors as a group, and fail to deliver the performance expected by the consumer.

The Gas Petitioners expect that any forced transition to condensing equipment would disproportionately affect lower-income housing, both on the owner and occupant sides. On the owner side, the concern is illustrated by the multi-family, leased housing, and manufactured housing industry groups participating in this petition.

Condensing and noncondensing units inherently involve different venting solutions. A shift to condensing when the existing furnace expires doesn’t just mean swapping out a unit; it raises the issue of structural modifications to the dwelling to properly vent the new furnace.

If modifications can be made, those still involve real expense for owners. Occupants would face some type of temporary disruption at best. At worst, placement and venting modifications could involve a decrease in indoor living space, loss of balcony space, or trading a window for a vent.

All that is assuming a practical retrofit option exists.

“We have had several installations where upgrading to a condensing furnace was not possible — not because of costs, but simply not being able to conform to code with the venting requirements,” said one installer interviewed by the petitioners.

Another surveyed professional said that in such retrofits, the manufacturer’s guidelines may be impossible to meet due to the distance to the closest otherwise practical vent location. The commenter noted that historic buildings and concrete buildings can also make some retrofits to condensing units “literally impossible.”

A TALE OF TWO REGIONS

The Northeast represents exceptional potential for decarbonization, thanks to the region’s heavy reliance on not only natural gas and propane but also on fuel oil. However, as one commenter explained, hurdles await. 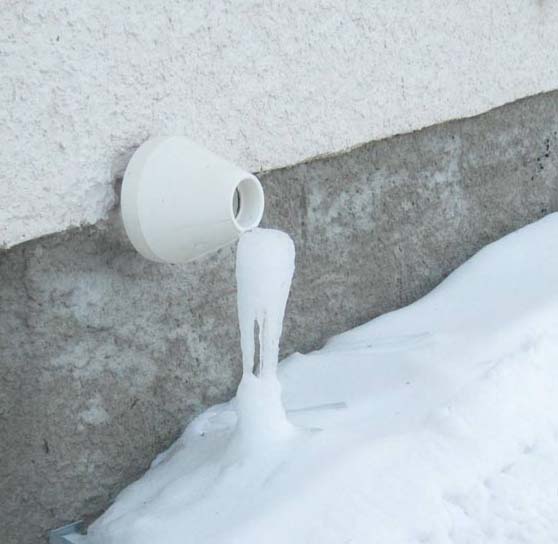 STUCK IN THE MIDDLE: Installer interviews by the Gas Petitioners convey that homes in the Northeast often contain furnace rooms located in the middle of an otherwise finished basement, complicating the journey to an otherwise simple looking sidewall direct vent. PHOTO COURTESY OF WTSHYMANSKI - CC-BY-SA 4.0

“Not all homes are able to use sidewall vented units. Here in the Northeast, we have houses with finished basements with the units in the middle of the house. To replace the unit, you have to rip apart the basement for the venting and intake. Also, many houses do not have the window clearance and/or ground clearance for direct vent. And the chimney can’t be lined for it because it is being used for multiple appliances.”

Down I-95, the South presents its own region-specific conditions: For most of the year, it’s either hot or still fairly mild. Comparatively light furnace use means homeowners could have a difficult (or impossible) time recouping any transition costs through the efficiencies of their new condensing units.

Federal rulemaking procedure is not simple. As befits a fairly regulated free market, a group or manufacturer cannot just write to the DOE and ask to get rid of an entire category of common equipment. An interested party in this sector would have to consider criteria regarding equipment efficiency, usefulness to the consumer, and performance characteristics or “features.”

The Gas Petitioners’ lengthy public comment assaults the idea of eliminating noncondensing equipment on several levels. Some points are equipment-based, while other objections focus on appealing to DOE protocols.

The DOE must make an interpretation that considers shared or suitably different condensing/noncondensing performance characteristics. That will point to whether it can rule on furnace efficiency in a way that would effectively eliminate the noncondensing category because it would never be able to meet new efficiency requirements.

From a practical point of view, though, thousands of noncondensing furnaces bring one feature to this debate that is not found in any manufacturer’s product literature: They are already in place, often in buildings tailored to their particular venting requirements.

If the population and government were starting from scratch, with no building stock and good intentions regarding energy efficiency, that would be one thing. But with so many homes and apartment buildings performing reasonably well and not equipped to change venting strategies without meaningful expense, the status quo (and the near- to mid-term cost of disrupting it) may weigh in the final decision right alongside the appeal of other options’ efficiencies.

When will this decision happen? That’s a good question. ACCA’s Todd Washam observed that it is up to the federal Office of Information and Regulatory Affairs to rule on any final action. That ruling was scheduled for January 2020, but these processes can stretch out, Washam added. As he predicted, January passed with no ruling and no updated timeframe.

Not too long ago, the idea of moving from fuels like coal or oil to natural gas enjoyed some momentum in the U.S.

That may still be true to some degree, but now, any upward trend in natural gas use for HVAC is facing a more recent opponent in the form of decarbonization. The goal of decarbonization is to shift as much local energy use (including HVAC) away from fossil fuel use and toward greater electrification.

Why bother, when energy use is still energy use, and that electricity still has to be generated one way or another? Because decarbonization assumes that over time, electricity generation will rely more and more on renewable sources like solar or wind power.

In the long term, the theory goes, the rise of renewably sourced power generation would combine with a decrease in end-user appliances relying on fuels like natural gas or propane, creating a markedly more sustainable energy landscape in the U.S.

It noted that 70 million American homes and businesses use a fossil fuel for space and water heating on site, estimating that this represents 10 percent of total U.S. carbon dioxide emissions. Decarbonization aims to put a dent in that number through a few core objectives, as the RMI study summarized:

Note that more than one objective involves a related goal: more flexibility in managing a somewhat outdated or strained electrical grid. Supporters also work on the assumption that reducing overall energy usage needs to go hand in hand with (and likely ahead of some) other decarbonization components.

However, “eliminating noncondensing furnaces and water heaters” does not show up on the top-line to-do list. That development might have more of a direct impact on HVAC contractors’ work than most of the list’s items, but it would be more of a second-tier (if welcome) bonus in the greater decarbonization realm.

If the effort to preserve noncondensing furnace options succeeds, contractors may lose some potential retrofit business and avoid other retrofit-related headaches. Decarbonization efforts will continue either way — its next most immediately noticeable item for HVAC contractors being the initiative to stop providing natural gas hookups in new construction.