What is superheat?
Superheat refers to the number of degrees a vapor is above its saturation temperature (boiling point) at a particular pressure.

How do I measure superheat?
Superheat is determined by taking the low side pressure gauge reading, converting that pressure to temperature using a PT chart, and then subtracting that temperature from the actual temperature measured (using an accurate thermometer or thermocouple) at the same point the pressure was taken. 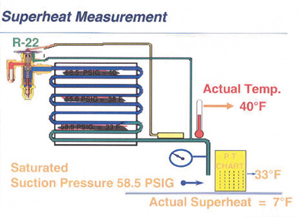 When should I check the superheat?
The superheat should be checked whenever any of the following takes place: