Around 10 years ago, state associations split from the Air Conditioning Contractors of America Association Inc. (ACCA).

“Independent organizations formed into a federation and over time, it became a requirement for mandatory joint dues,” said Sean Robertson, vice president, membership and business operations at ACCA.

In 2015, ACCA made the decision to have every organization be separate. A new model called the Allied Contracting Organization (ACO) was put forward, and a memorandum of understanding (MOU) was spread around the ACO, where relationships were typically formed at the state level, Robertson said.

Though there may have been hard feelings, it seems both ACCA and state organizations are moving past it — and working toward the common goal of advocating for the HVAC industry.

The Texas Air Conditioning Contractors Association (TACCA) has been around since 1968, when a group of contractors in the Houston area founded the original PAC, said Devorah Jakubowsky, executive director of TACCA. Its inception was for the sole purpose of putting together and presenting legislation that would create a statewide contractors law for Texas. At the time, each municipality or individual area would license contractors. In a state with, say, 254 counties, that’s a bit overwhelming, Jakubowsky said.

The law was proposed, but a filibuster prevented any other legislation from passing that year.

Fast forward 10 years later — that same group of contactors from 1968 were back discussing how to get the state license law passed. They voted to allow that charter to form a new organization. Enter: TACCA.

It was reformed as a state chapter of ACCA, Jakubowsky said. Their priority was the first legislation they had worked on. TACCA presented the law again in 1981, but it failed. TACCA rallied, recruited more members and reintroduced the bill in 1983; it passed.

TACCA has been busy since, Jakubowsky said. They filed a refrigerant bill in 1997, a major license cleanup in 1999, added registered and certified technicians to the HVAC law in 2007, worked with the National Federation of Independent Business (NFIB) to pass the franchise reduction act of 2015, and other legislative efforts. They’ve developed a continuing education course and exam prep classes. 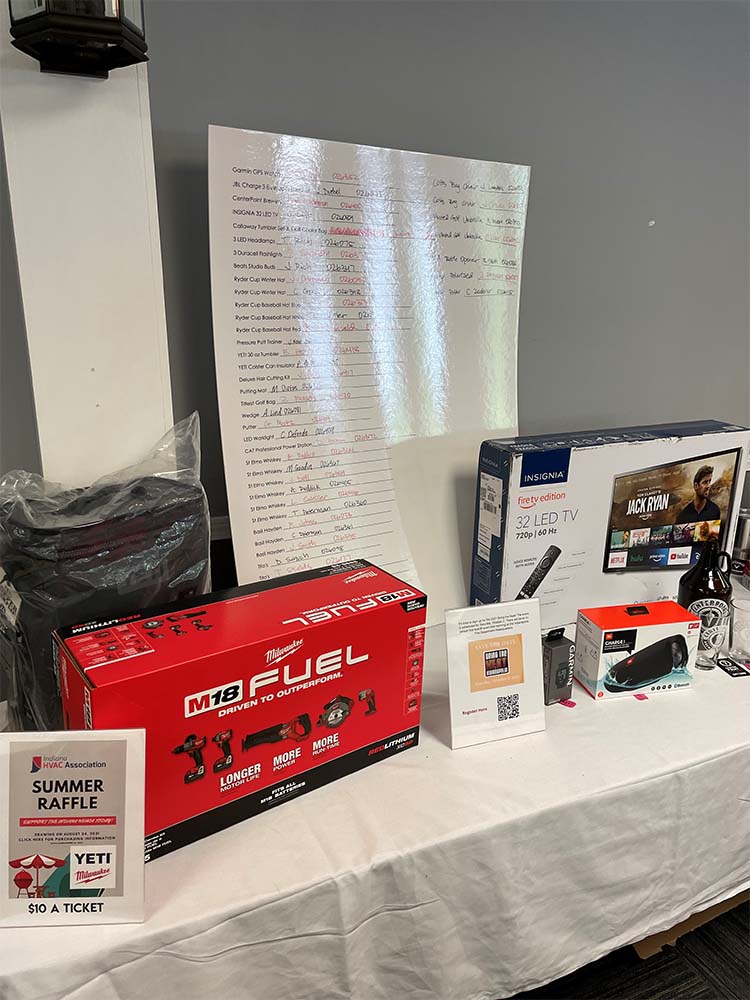 PERKS: Raffle items at one of IHA’s outings. (Courtesy of Indiana HVAC Association)

The Indiana HVAC Association (IHA) has been around for a long time, said Jeremy Ash, IHA board of director president and Airtron Heating and Air Conditioning division manager. They broke away from ACCA, like many of the other state associations did years ago, but recently become re-affiliated with ACCA through ACO. IHA does networking events and training events. Its biggest event is its annual golf outing.

Membership at IHA is made up of majority central Indiana contractors, but they’ve been trying to broaden to other markets. By no means is IHA a monster association, Ash said, but they have a good core group of vendors, contractors, suppliers, and utility companies that are a part of the association.

“They’re both important because of their impact on contactors and their businesses,” Jakubowsky said.

For example, during the pandemic, HVAC contractors weren’t considered essential workforce in Texas. TACCA quickly urged the governor to include HVAC in that category and it was approved almost immediately.

Robertson noted that there has been some brand confusion and that a lot of contractors out there simply have no idea that their membership no longer includes multiple levels. It was about names. But attitudes are changing and state organizations have renamed themselves.

Support Each Other, Support HVAC

TACCA and IHA are independent organizations, but they work together with ACCA through MOUs. TACCA and IHA focus on issues with state legislation and regulatory agency work, whereas ACCA focuses on those efforts at a federal level.

Though Jakubowsky only started with TACCA in 2019, the fact that TACCA formed under the ACCA umbrella as a chapter signifies a good working relationship.

IHA’s reason for re-affiliating itself with ACCA, Ash said, was the outstanding training and resources ACCA provides. Thought the two are separate now, it’s a loose partnership. It’s an understanding that each are separate entities, but ACCA supports IHA and IHA supports ACCA. IHA is trying to bring some of ACCA’s support into its state level.

ACCA is a huge part of the HVAC industry, Ash said. As an association, IHA is going to continue to advocate for its members, and part of that is recognizing the benefits of being affiliated with ACCA.

Certain advocacy tools that ACCA has invested in has allowed ACCA to campaign for organizations without it costing ACCA a penny. But also, Robertson said, “We can use the advocacy tools we’re already for to help them mobilize folks for their campaigns, and then build a contact list for both of us to follow up and engage more folks in the future … that’s easy, low-hanging fruit.”

Now ACCA is working on a national level, with national code, so things happen statewide as well, Jakubowsky said.

“So they can get a national resolution to the problem instead of putting band aids on it statewide,” he said.

“I think we’re all making efforts to be collaborative in how we work together to support and advance the industry.”
Devorah Jakubowsky
Executive director, TACCA

The Future of ACCA and ACOs

Something that surprised Robertson was the generosity and enthusiasm of the state associations’ to support ACCA and to share resources to their members at both the national and state level.

“I think we’re all making efforts to be collaborative in how we work together to support and advance the industry,” Jakubowsky said.

When TACCA needs legislative support from ACCA, they’ll get it, Jakubowsky said — for example, when ACCA brought to their attention that there was an issue with the outdoor outlets Ground-Fault Circulator Interrupter (GFCI) requirement within the 2020 National Electrical Code (NEC).

Since TACCA had already adopted the code at the time, they couldn’t have it removed, but by communicating with ACCA, they were able to figure out how to move around it. Since ACCA made them aware of that, at the state level TACCA was able to rally its members and contractors. Working with the Texas Department of Legislative Licensing (TDLR) and Regulation, that section of the code was determined exempt until January 2023.

ACCA’s trainings are an opportunity for those who aren’t members of ACCA but are members of IHA — those mom-and-pop shops — to educate their employees and train their technicians, Ash said. It’s a resource.

Ash said IHA plans to continue and grow in its partnership with ACCA to advertise its training opportunities to IHA members at discounted rates.

“We’re thrilled that our relationship is healing and building, and we’re going to continue to work together to promote each other’s events,” Jakubowsky said.

“We have a really good collaborative relationship right now.”