The on-again, off-again federal tax incentives for greater HVAC efficiency are on again.

Enhanced tax credits for homeowners who install certain HVAC equipment and for home builders whose projects meet specific energy-efficiency standards, and tax deductions for the owners of commercial buildings that are upgraded to achieve defined energy savings, are part of the Inflation Reduction Act, passed August 12 in the U.S. House of Representatives and expected to be signed by President Joe Biden on August 16.

The estimated $737 billion measure, salvaged from the remnants of 2021’s Build Back Better plan, had been considered all but dead as recently as July. But late revisions and agreement among Democratic senators led to its passage in the Senate in early August by a party-line, 51-50 vote, with Vice President Kamala Harris breaking the tie.

The three types of incentives, named for their respective sections in the tax code, apply to a broad range of energy-efficiency measures, including installing certain HVAC equipment and certain building components. Following are some of the highlights of the incentives.

The 25C credit, available to homeowners who have eligible HVAC equipment or energy-saving “building envelope components” such as doors, windows, and insulation installed, was extended through 2032.

The credit, subtracted directly from the homeowner’s tax liability, amounts to 30% of the cost of the improvements, with an annual limit of $1,200 — up to $600 for qualified HVAC equipment and up to $600 for building components ($500 for exterior doors). A lifetime cap on the credit was replaced by the annual $1,200 limit.

Notwithstanding the limit, a homeowner who has a qualified heat pump, heat-pump water heater, or biomass-fueled stove or boiler installed can take a credit of up to $2,000.

Homeowners can also get a credit of up to $150 for a qualified home energy audit.

Home builders can take advantage of enhanced 45L credits, which were also extended through 2032. They are available for single-family, multifamily, and mobile-home dwellings.

The credits require eligible homes be built to meet specific Department of Energy (DOE) Energy Star standards, or to be “zero-energy ready,” which the DOE defines as “so energy efficient that a renewable energy system can offset all or most of its annual energy consumption.”

Builders of multifamily projects who adhere to prevailing wage and apprenticeship requirements can claim credits of up to $2,500 per unit for those that meet applicable Energy Star standards, and up to $5,000 per unit for zero-energy ready units.

The Inflation Reduction Act broadened the availability of 179D tax deductions, which are generally used by the owners of commercial buildings that are outfitted to increase energy efficiency. Tax deductions are subtracted from a taxpayer’s taxable income.

A 179D deduction requires the building to show minimum energy cost savings of 25% compared to its defined baseline. The minimum deduction is 50 cents per square foot; that is increased by 2 cents for each percentage point of energy savings over 25%, up to a maximum credit of $1 per square foot.

The HVAC equipment installed in such a project must meet the ASHRAE Standard 90.1-2007 or the most recent 90.1 standard.

The 179D deduction, which is a permanent part of the tax code, has a prevailing wage and apprenticeship incentive that can increase the deduction to up to $5 per square foot if those requirements are met.

A taxpayer’s 179D deduction is reduced by the total of 179D deductions taken for the same building within the last three years. In energy-savings projects in government-owned buildings, the deduction can be taken by the project’s designer.

The Inflation Reduction Act also sets aside $4.3 billion for a DOE rebate program to encourage energy efficiency measures. The program would offer eligible households rebates of up to $8,000 each for a qualified heat pump. 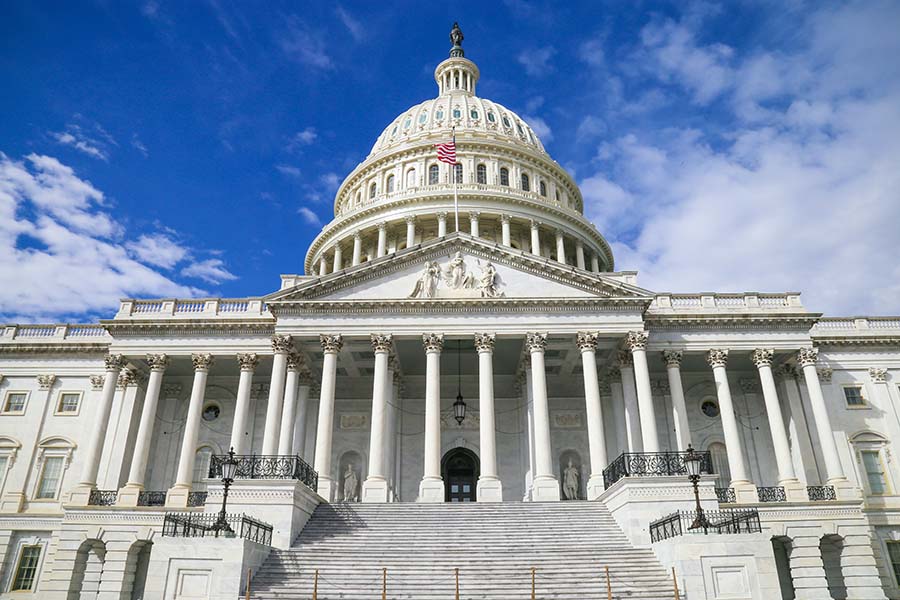 MIXED REACTION: The Inflation Reduction Act was recently passed by both houses of Congress and is expected to be signed by President Joe Biden. While the HVAC industry endorses its incentives for the use of efficient HVAC equipment, some say the measure’s tax and labor-force provisions will be harmful. (Courtesy of Unsplash)

Reaction is mixed in the HVAC industry to the passage of the federal Inflation Reduction Act (IRA), a sweeping proposal aimed at addressing health-care costs and climate change as well as tackling the nation’s deficit.

The bill, which will raise an estimated $737 billion through a 15% minimum tax on large corporations, increased tax-code enforcement, and other revenue measures, passed both houses of Congress by party-line votes in August and was expected to be signed by President Joe Biden on August 16.

Among its provisions are incentives for the use of higher-efficiency HVAC technology in homes and commercial and public buildings. But while those incentives are embraced by the HVAC industry, other facets of the IRA, for some, outweigh its benefits.

“Unfortunately, it looks like Congress chose politics over good policy in crafting this bill,” said Alex Ayers, the government affairs director at HARDI, in an emailed statement.

“We are very disappointed with this outcome and will work tirelessly to impact the rule-making process to improve the impacts on America’s HVACR contractors,” said Barton James, the president and CEO of ACCA, which was among dozens of trade and interest groups lobbying against the act.

Both HARDI and ACCA objected to the legislation’s funding of an expansion of the Internal Revenue Service, which they said will lead to more audits of small businesses.

“From ACCA member experience, we know many, if not most, of these additional audits will be conducted on the owners of family businesses who have fully complied with the tax code,” James wrote in an August 8 letter to top Congressional leaders.

Association representatives are also wary of an extension of loss limitations that will keep pass-through businesses from fully writing off business losses. James contended that provision is intended to offset the potential revenue lost by exempting private-equity investors from the minimum corporate tax.

“The cap on active pass-through loss deductions is bad policy at any time, but it is particularly harmful when the economy is weak, and businesses are trying to keep up with inflation,” he wrote in his letter.

Ayers also objected to the prevailing-wage and apprenticeship requirements attached to some of the tax incentives, saying they “will likely prevent full utilization of these tax credits with the current workforce issues facing the industry.”

The incentives, Ayers said, had bipartisan support and would likely have been passed without prevailing-wage and apprenticeship rules.

“Trane Technologies is looking forward to helping our customers access incentives and rebates for energy-efficient HVAC solutions, including heat pumps, thermal management and storage, smart thermostats, and other sustainable innovations,” said Paul Camuti, the chief sustainability and technology officer at Trane Technologies Inc., in an email.

At METUS, or Mitsubishi Electric Trane HVAC U.S., a joint venture, Jason Rosenthal, the vice president of marketing, said the incentives will boost the heat-pump market.

“The IRA pushes heat pumps further into the mainstream and closer to becoming the standard for heating and cooling our homes,” he said.

According to a Senate summary of the IRA, of the $737 billion expected to be raised, $369 billion will be invested in energy security and fighting climate change, $300 billion in deficit reduction, $64 billion in Affordable Care Act improvements, and $4 billion in drought resiliency programs in the western U.S.