Keefer Rader was 19 years old when he bought the Pagosa Rooter drain cleaning company in Pagosa Springs, Colorado in 2006. Almost simultaneously, he founded Outlaw Mechanical, a full-service heating and cooling company, to serve the same territory.

Staffing the companies became a serious challenge as the town began to grow.

“I had drained my savings and had to borrow additional money, but I quickly had a few guys working for both companies and we became very well known in what was (at the time) just a little mountain town,” he said. “Long story short, I had no life outside of work, and burned out, hard.” 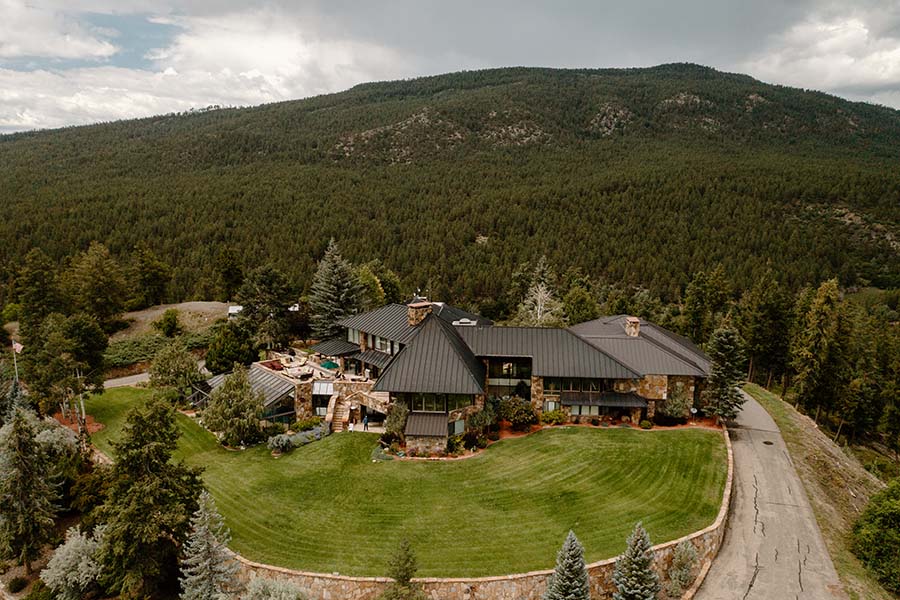 The main residence only accounts for a portion of the 77,000 square feet of conditioned space on the expansive mountaintop property. (Courtesy of Dan Vastyan)

Rader sold Pagosa Rooter two years later, put Outlaw Mechanical on hold, and went to work full time at a high-end, private ranch nearby. Eventually he married and moved to New Mexico, where he and his wife, Dorian, brought Outlaw Mechanical back into existence. The company has since won recognition as the No. 2-rated mechanical firm in Albuquerque. 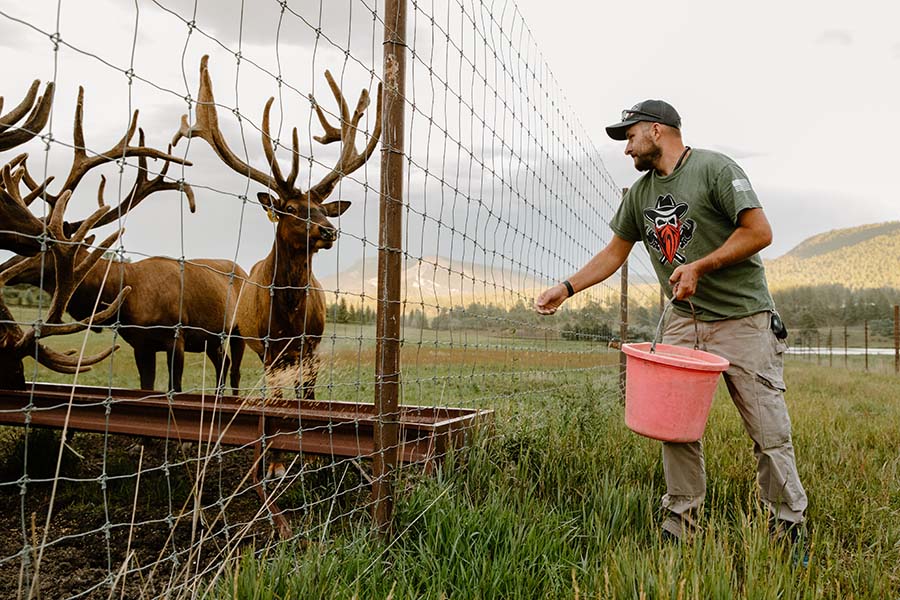 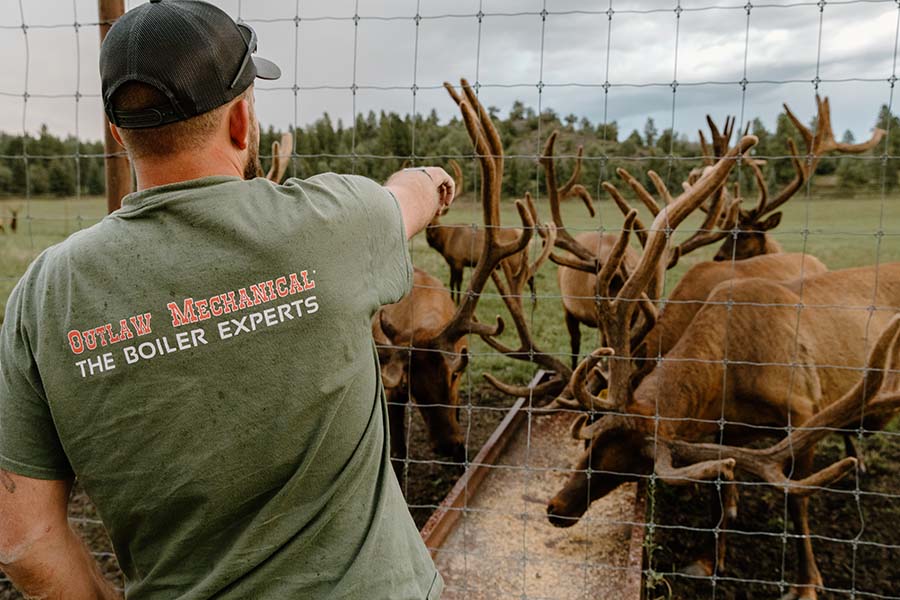 Keefer Rader, who owns Outlaw Mechanical, has worked at the ranch since he turned 20, first as a hunting guide, groundskeeper, general maintenance professional, and now as a trusted mechanical subcontractor. Rader feeds the elk over lunch break. (Courtesy of Dan Vastyan)

Despite living four hours away from Pagosa Springs, Rader remains the primary caretaker of all things mechanical at the sprawling family resort, wedding venue, and hunting preserve. The main house was constructed in the late `70s and early `80s, and is entirely heated by hydronics.

“As beautiful as the buildings here are, you can imagine the challenges that arise when dozens of contractors, over the course of decades, installed and serviced the systems that serve a combined conditioned space of 77,000 square feet,” said Rader. “That includes greenhouses, pool heat, a natatorium, spa, and all variety of radiation.”

There are a dozen buildings on the property, but the most substantial are the main residence, the guest lodge, and the shop/office. 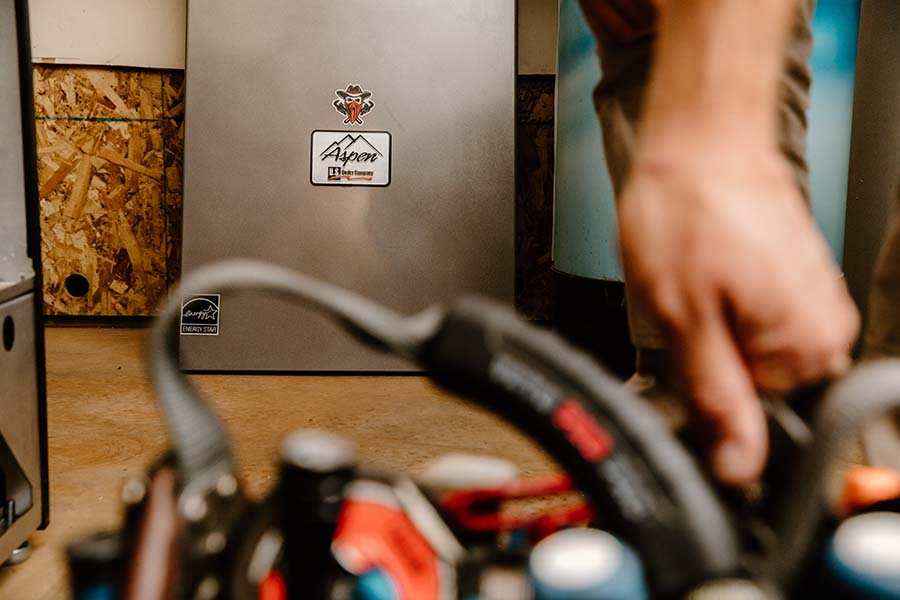 Rader installs the Aspen condensing boiler because he prefers the fire tube heat exchanger for maintenance, as well as the boiler’s 10-1 turndown. 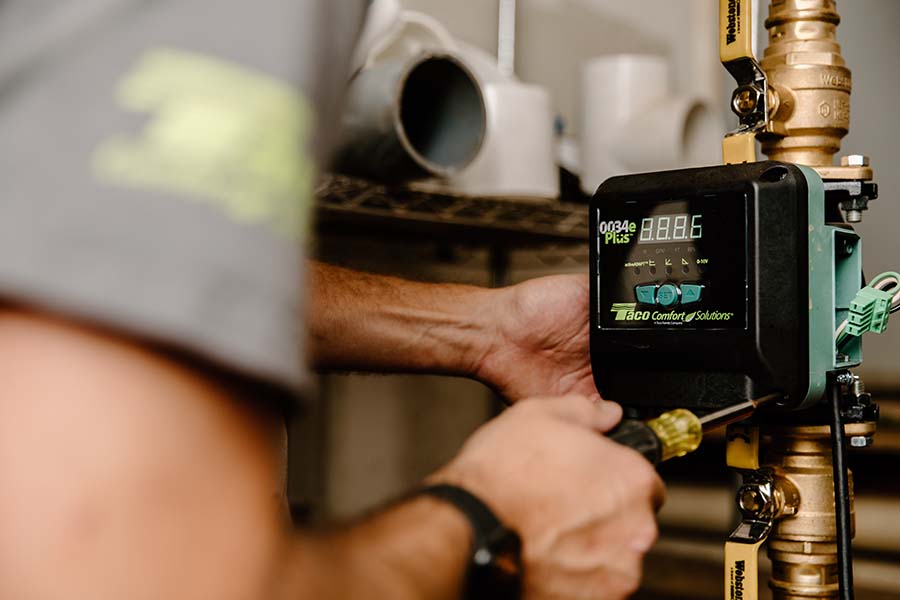 Taco 0034e circulators we used as primary boiler pumps in the lodge/wedding venue, for their ability to display flow rate and match the pump curve needed.

The property’s primary residence is the second home for a family that lives on the East Coast. The 20,000-square-foot house includes 12 bathrooms and a natatorium with a 45,000-gallon pool. Heat is provided by fin-tube baseboard, in-floor radiant, air handlers, and fan coil units.

“Given the age of the home and the various contractors who’ve worked on it over the decades, the main challenge in the house is keeping up with failures, whether that be boilers, pumps, pipe, or controls,” said Rader. “It’s perched on a hill, so it’s the highest building for miles, making it a lightening magnet. That only complicates system controls.” 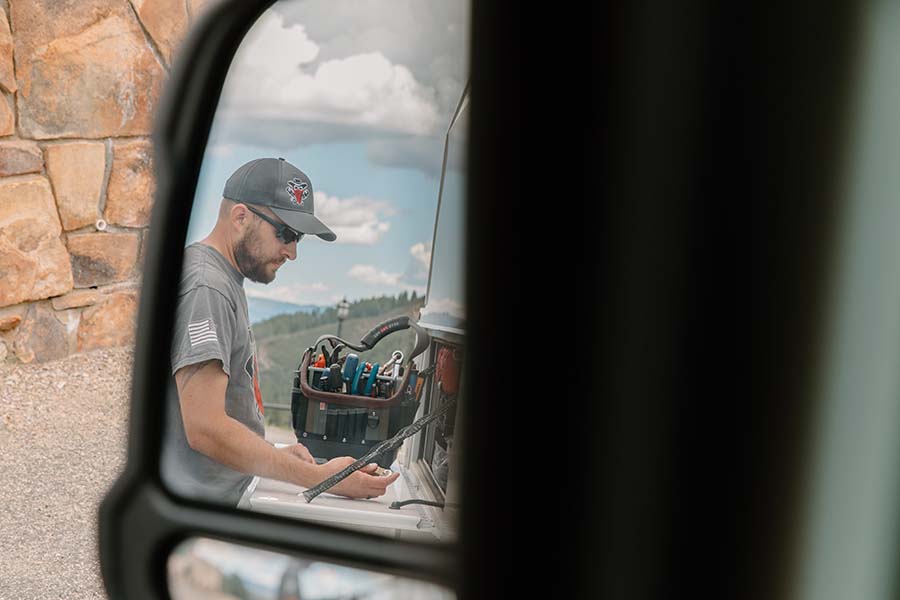 Rader makes the drive from Albuquerque to Pagosa Springs several times a year to visit the owner and maintain the numerous systems on the property. 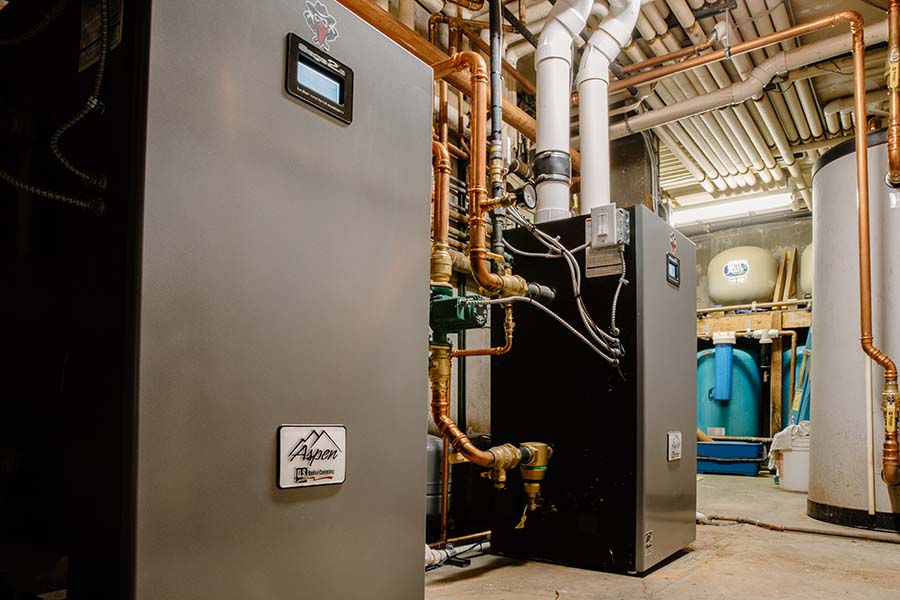 Rader prefers the fire tube heat exchanger for maintenance, as well as the boiler’s 10:1 turndown.

The owner prefers redundancy whenever possible, and one of the boilers, if running on high-fire, can supply the heat needed on a design day, but barely. This system also creates enough hot water for the radiant loops in the natatorium, though pool water heat is handled by a stand-alone pool heater. This is something Rader would like to change in the near future, preferably by using condensing boilers and titanium heat exchangers. 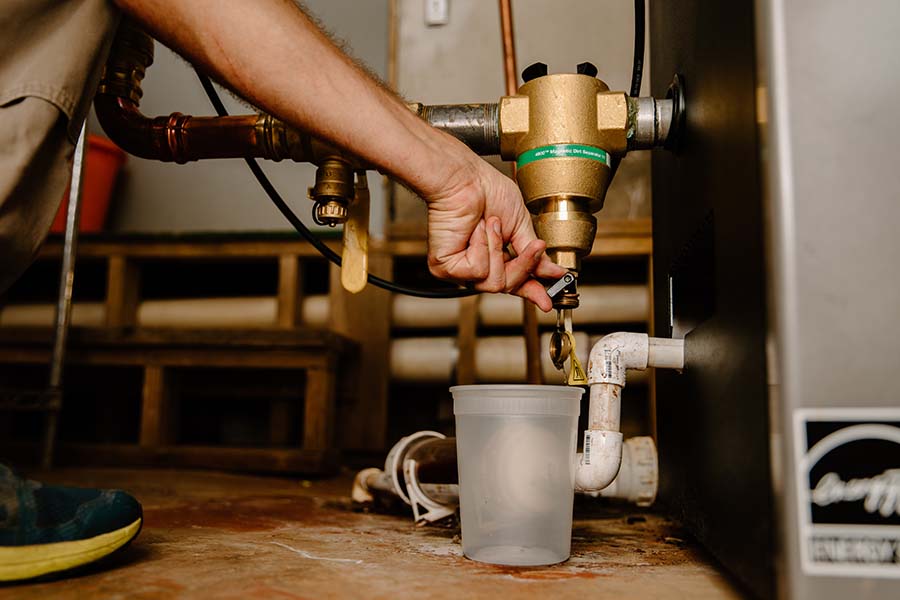 To protect the boiler and circulators in all of the systems across the property, Outlaw Mechanical installed Taco’s 4900 Series Magnetic Dirt Separator. (Courtesy of Dan Vastyan)

When the Rader family visits the property, they can’t keep their children out of the 90°F pool, which is complete with a pair of taxidermy Nile crocodiles.

When the boilers were replaced, Outlaw Mechanical also piped in a Taco 4900 Series magnetic dirt filter on each boiler was added to catch any ferrous particles before they have the opportunity to enter the boiler.

The owners of the property have been avid international hunters for over 50 years and have donated millions of dollars toward wildlife conservation. To display their taxidermy collection, Rader got involved with the two-year construction of a new, a 5,200-square-foot trophy room. With soaring 46-foot ceilings, the space is built like a Yeti cooler. Four-inch rigid insulation under the 8-inch slab directs heat upwards from an extensive radiant, along with 2x10 framing and spray foam insulation on the walls and ceiling. There are also three feeder lines to remote manifolds, all part of a single zone.

“The owner prefers 72°F, but given the family’s collection of taxidermy, they’re honoring the taxidermist’s request of a lower temperature of 65°F,” Rader said. 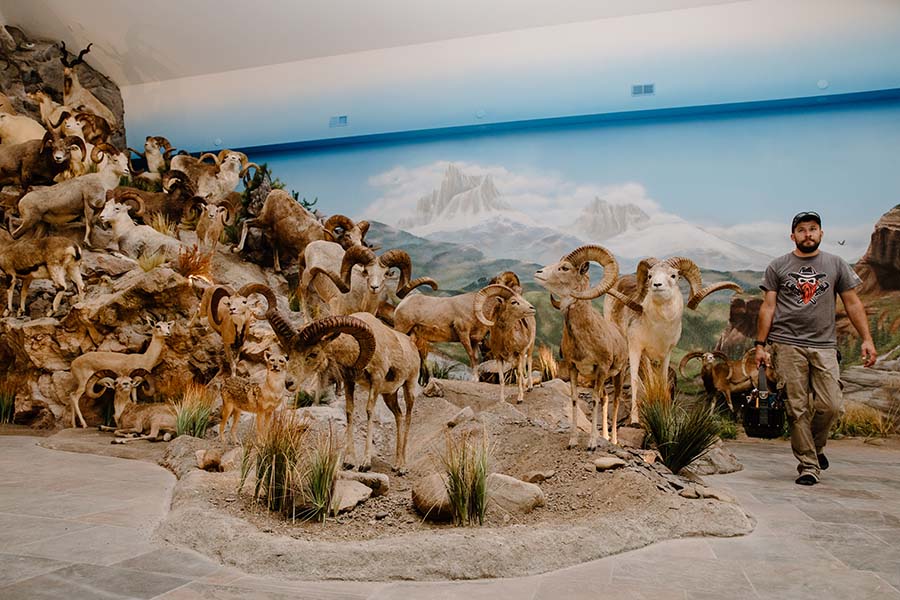 Rader compares the runtime hours and number of cycles between the two boilers on the system. 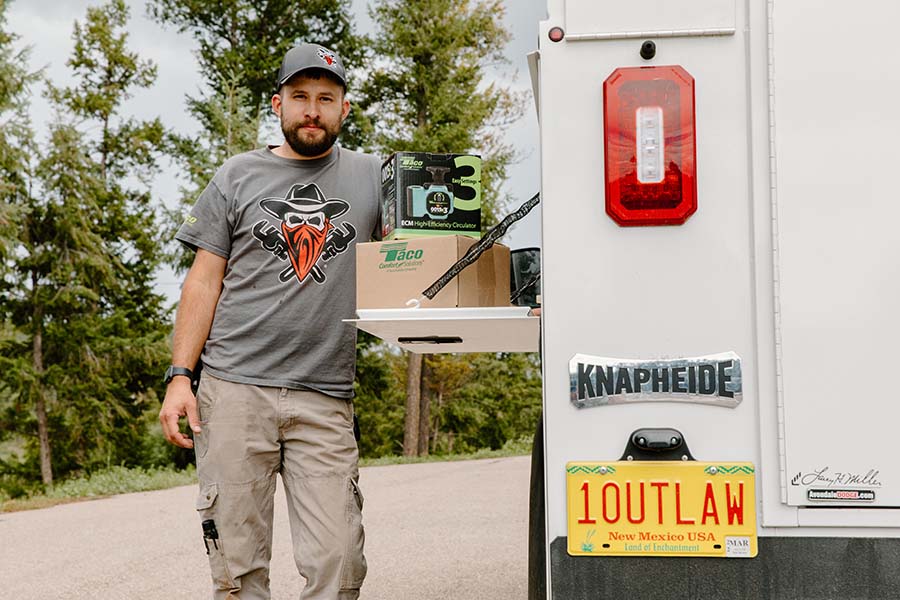 Rader founded outlaw mechanical with his wife, Dorian, in 2008.

The two 280 MBH boilers serving the trophy room also provide hot water for 2,000 square feet of snowmelt outside. These units are aging out, and Rader would like to replace them with a pair of condensing Aspen 270s over the next few years. This will retain the redundancy that is essential to the remote property.

“We used a 50-foot ramp to get the existing boilers into the room before it was finished,” said Rader. “Now there’s a large staircase, so the retrofit will be a little easier.”

On the second-highest peak on the property, the owners built a lodge and wedding venue in 2004. The 26,000-square-foot accommodations include an outdoor heated pool and spa, commercial kitchen, and eight guest rooms.

Cast iron baseboard and fan coil units were originally served by a pair of large conventional boilers. In 2020, Outlaw mechanical replaced these with 320 MBH Aspen boilers.

Thought this was a relatively straightforward boiler replacement, getting the flow rate correct through each of the boilers was critical.

“Obviously, the occupancy changes dramatically, so there’s a great deal of variability in the heat needed both for space and DHW,” said Rader.

A Taco 0034e Plus ECM circulator was installed on each boiler.

“I appreciate the pump’s screen and all of the data it displays,” Rader said. “I can see the real-time flow rate through the boiler to diagnose restrictions in the system, and can easily match the pump curve to the head loss on the boiler loop.”

Then, they swapped out all 32 zone circulators with new Taco 0015e3 pumps. Because of the cast iron baseboard and the heavy use of ECM pumps, they also included the same magnetic strainers used on the main residence. 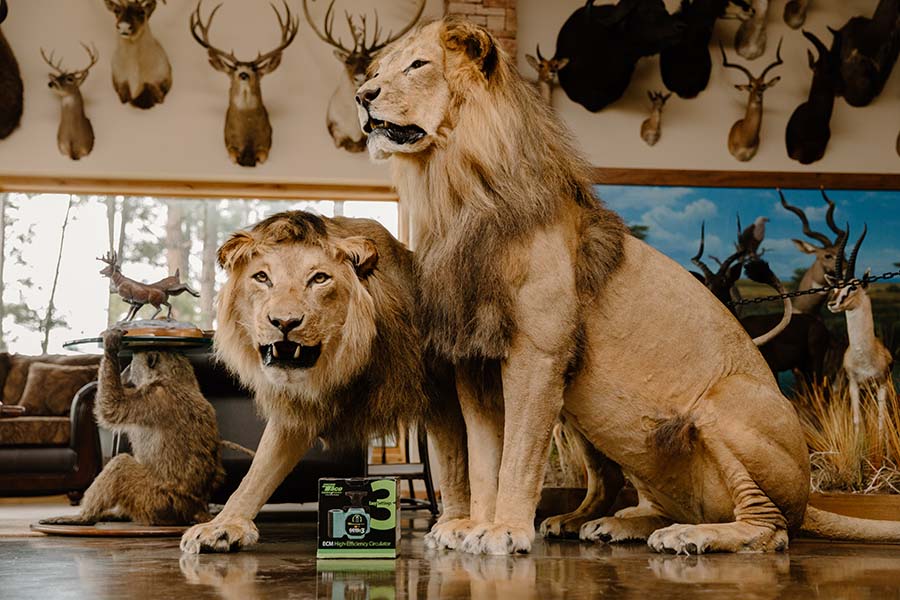 The 32 zones of hydronic heat in the lodge are each served by a high-efficiency, ECM Taco 0015e3 circulator. 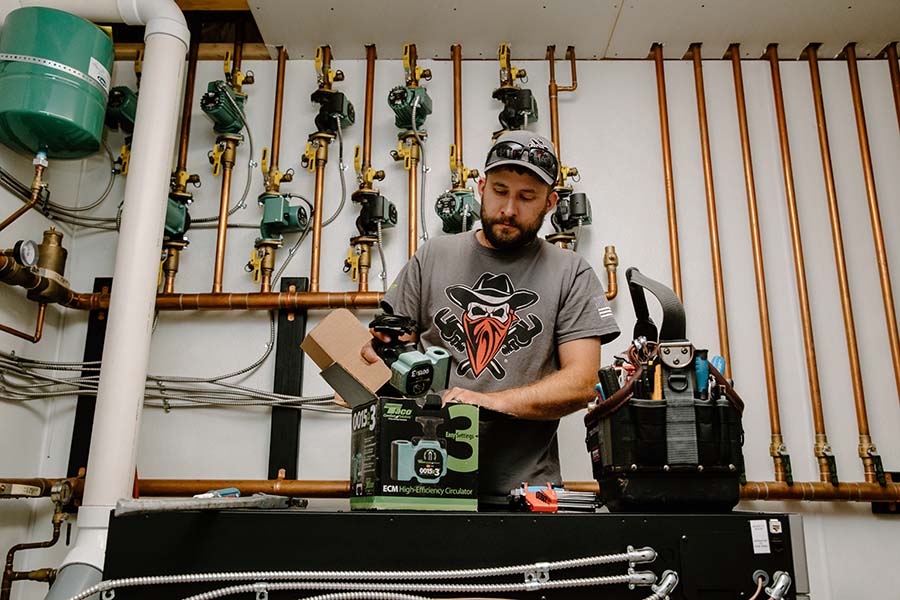 Rader replaces a circulator in the large garage radiant system.

Rader programmed the Sage 2.3 boiler controls on the Aspen boilers to alternate lead position based on runtime hours.

“I’m four hours away, so if the boilers have similar hours, maintenance is greatly simplified.”

Down low on the property near the livestock barns is a 12,000-square-foot shop constructed in 2012. Fan coils and an extensive in-slab radiant system and fan coil units serve the building, which includes a theatre, office, trophy room overflow, mechanic bays, and ample room for the family’s exotic car collection. The shop is built with metal-sided SIPS panels, so it’s extremely well insulated. The ranch has even hosted a wedding in the garage.

Though Rader didn’t install the system, he maintains it. Heat and DHW is provided by a 500 MBH Thermal Solutions Apex boiler. The installation was clean, but there are a few items that need improvement. The system was never flushed upon installation. So on occasion, Rader deals with a little dirt in the system. He also plans to install a Taco Radiant Mixing Block to simplify the controls. Right now, the boiler provides a lower water temperature to the radiant in the office and shop areas, while the fan coils in the garage are wired to the boiler’s DHW priority contact. Rader would prefer to see the water temperature mixed down for the radiant.

“I consider the owners to be family friends,” said Rader. “They’re done a great deal for me. Dorian and I got married on the property, and I really want to see the best for them. Ultimately, I’ll make as many improvements as I can to keep everyone comfortable and the facilities operating as sustainably as possible.”