Owner of mechanical contractor firm make their residence a showcase

Keefer and Dorian Rader, owners of Outlaw Mechanical, refer to their firm as “The Boiler Experts,” but they could easily change their motto to “The Home Improvement Experts.” After all, they’re licensed mechanical contractors as well as licensed general contractors.

Outlaw Mechanical has served the greater Albuquerque, New Mexico, area for 12 years. The Raders purchased their home four years ago, in the rural mountainside suburb of Cedar Crest. It was a 2,200-square-foot ranch with three bedrooms on 2.5 acres. Built in 1963, it had barely been improved since, aesthetically or otherwise.

For five months, and with their first child on the way, the couple lived in their camper in the backyard of the newly-purchased property. They stripped it to the studs and replaced literally everything but the roof, which had been done by the previous owner five years earlier.

Once the house was livable (with new plumbing, electrical, insulation, sheet rock, flooring, etc.), they moved back into the home and replaced the kitchen. Then their attention turned to making the place their own.

“Our goal was to build exactly what we wanted and to make the house extremely comfortable,” Dorian Rader said. “The work really began when we moved out of the camper and into the house.”

The list of improvements includes a 1,000-square-foot master suite addition and a dedicated mechanical room with outdoor access. This brought the floorplan to 3,200 square feet, all on one level. A 950-square-foot backyard patio with snowmelt was added, too.

“Efficiency was definitely a consideration when we initially discussed how to heat and cool the home, but it was a distant second to comfort,” Keefer Rader said. “We live at 7,200 feet above sea level, and our temperature can swing as much as 50°F in a single day. I wanted zones, and lots of them.”

When the house was purchased, it had an ancient Sears Roebuck gas-fired furnace. It did the trick for the time being, but was on the short list of items to replace.

The first thing Keefer did to the HVAC system was replace the existing furnace with an inverter-driven, 24 SEER unitary heat pump and gas furnace. This covered the whole house via the existing ductwork, and would go largely unused after the rest of the retrofits and additions took place.

He then added three Fujitsu Halcyon mini-split heat pumps for primary a/c and another form of supplementary heat. Two of these were multi-zone units, for a total of eight zones.

The Raders have found that their daughter likes the rooms especially cool, which can be tough to accomplish in a New Mexico summer. The mini-splits allow them to pinpoint the exact temperature she wants while also permitting tight temperature control for other rooms.

“We’ve installed Fujitsu mini-splits for years, primarily because of their reliability and the fact that their tech support is so strong,” Keefer Rader said.

As Albuquerque’s resident boiler expert, Keefer Rader wanted a hydronic system for primary heat. He added fin-tube baseboard to the original part of the home, while the master suite addition is heated with radiant in-floor. The new bathroom also has a heated shower bench and towel warmer. 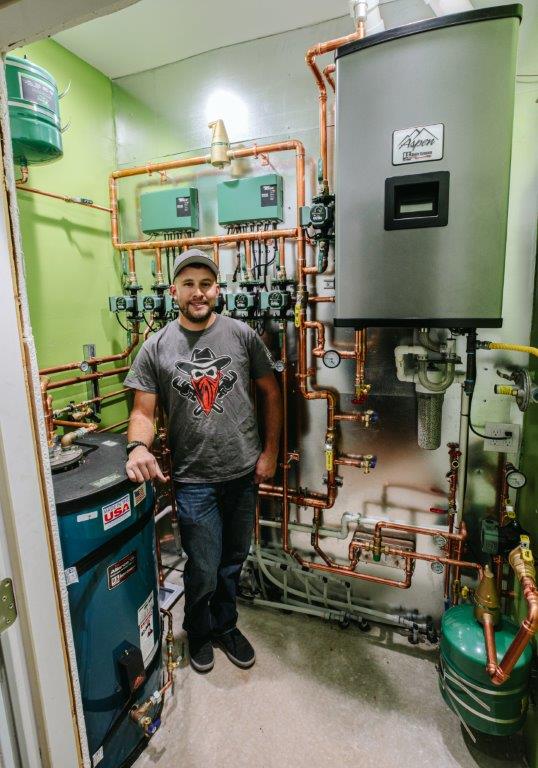 FINISHED JOB: Keefer Rader stands in front of the completed hydronic system that will keep his family warm with radiant heat. (Courtesy Of Outlaw Mechanical)

“Counting the snowmelt system, I have four different supply water temperatures coming off the boiler, some of which run based on outdoor reset, some that don’t,” Keefer Rader said.

The system provides all those water temperatures via injection pumping and mixing valves. For example, the snowmelt loops in the back patio receive 62°F supply water. It’s made up of half-inch PEX and controlled by a Tekmar slab sensor with manual override. It has a flow rate of 6 GPM.

The shower bench, towel warmer, and 50-gallon Alliance SL indirect water heater get 180°F, and the in-floor and baseboard loops run off of wireless outdoor reset. The radiant sees a maximum supply temp of 112°F at an outdoor temp of 15°F.

Maintaining perfect setpoints across so many different zones can be a bit daunting, but Keefer Rader used Taco’s 0018e circulators on all of the zones, giving him the ability to accurately manipulate the flow rate across each zone via a Bluetooth app. This allows him to hit the exact ΔT he wants for each zone.

This was especially useful for the snowmelt loop, where flow can be controlled on either side of the heat exchanger.

“I built the new mechanical room with enough space for all of the hydronic components, but it’s still a bit tight,” Keefer Rader said. “The 155 MBH boiler and the water heater share the space. This job makes maybe 30 Aspen condensing boilers that I’ve installed to date.

“I like them for their dependability, serviceability, and the ability to use U.S. Boiler Company’s outdoor reset. Before the Aspen came out, I had installed hundreds of Alpine boilers, but I now prefer the firetube design from a service standpoint.”

A single-story, 3,200-square-foot floor plan would provide the perfect recipe for long wait times to get hot water at the tap, but Keefer had the foresight to install the piping for a domestic hot water recirculation system while they had the walls open. He used a stainless steel Taco 006e3 recirc pump controlled by Taco’s SmartPlug instant hot water control.

Keefer bought the boiler, pumps, and other components through Doc Savage Supply in Albuquerque.

Counting the wood stove in the living room, the house has four sources of heat and two sources of a/c, just the way Keefer and Dorian wanted. Comfort levels, they say, are perfect, summer or winter.

“Our goal for the house was simply to have everything we wanted and for the family to be comfortable,” Dorian Rader said. “I wouldn’t change a thing. We don’t consider the energy cost when we set the thermostat, but our bills are very reasonable.”

Despite the rural location, the home has natural gas service. The annual average electric and gas bills are each roughly $100 per month. Considering the volatile temperatures, the family is satisfied with that.

“There’s a lot of sweat equity here,” Dorian Rader said. “We did all the work ourselves when we had time; a lot of late nights and long weekends. It was four years in the making.”

Keefer Rader now uses the property as a display piece for potential customers. It’s a great example of how comfortable a residence can be, while also looking fantastic.

“All that’s left to do is finish the landscaping and build a shop,” he said. “It definitely feels like home already, but when those are crossed off the list, we’ll be able to sit back and enjoy it. Or find a new hobby.”

Keefer Rader, Owner of Outlaw Mechanical in Sandia Park, New Mexico. Contact him at keefer@outlawmechanical.com or 505-926-3811.